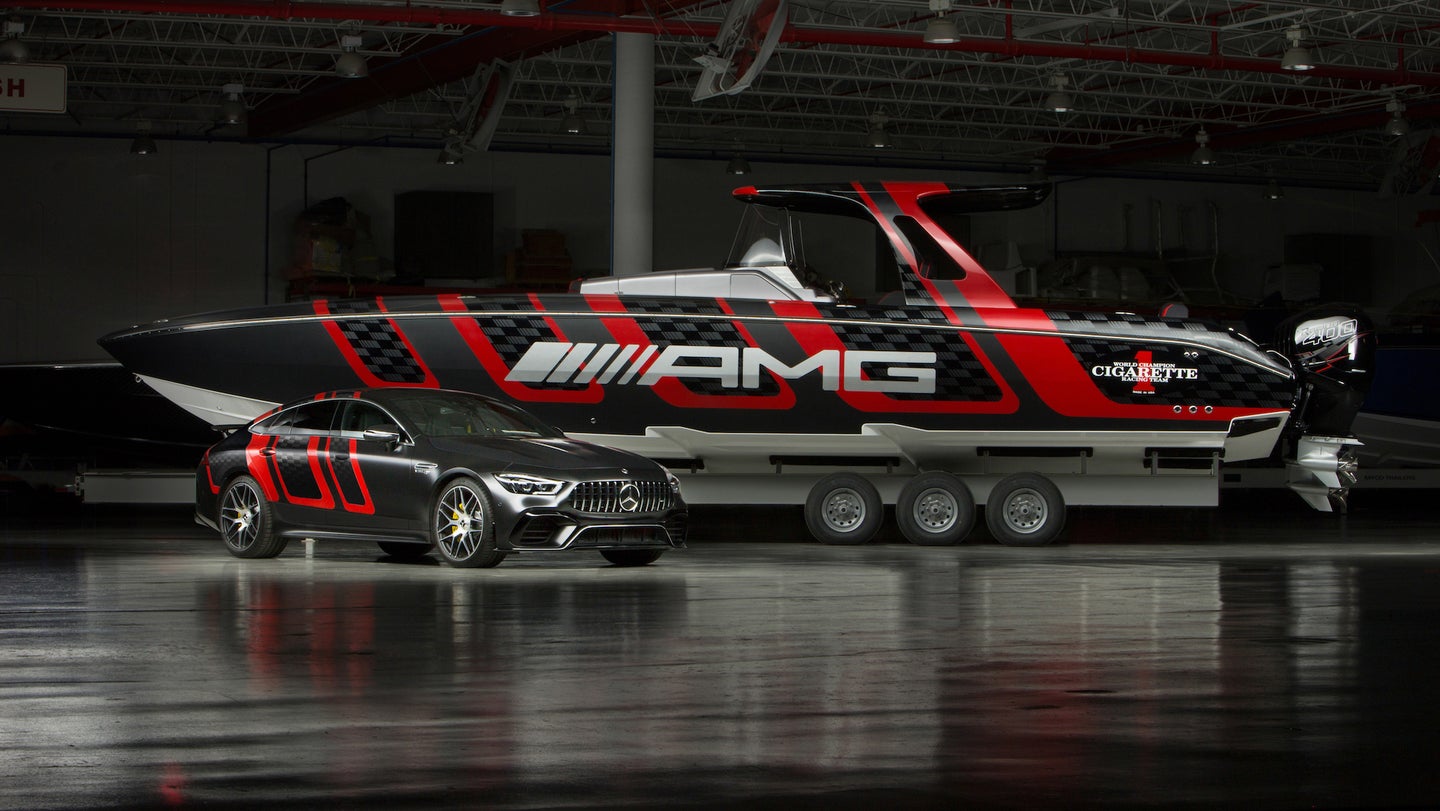 Mercedes-AMG and Cigarette Racing unveiled the "41’ AMG Carbon Edition" at the 2019 Miami International Boat Show on Friday. The larger-than-life speedboat commemorates 12 years of the partnership between the German automaker and Cigarette Racing, the popular boatmaker known for its high-tech and grandiose watercraft.

This year's build is a 41-foot-long behemoth built largely out of carbon fiber, hence the 41' AMG Carbon Edition name, and powered by four Mercury Racing 400R outboard engines that generate a whopping 1,600 horsepower. According to Mercedes-AMG, the hull of the vessel uses an innovative sandwich construction with carbon-fiber structural laminates on both sides of a lightweight core, allowing a more rigid structure that weighs considerably less. The deck, rudder, roof lining, and hardtop are also made out of—you guessed—carbon fiber.

"For twelve years we have been exploring the limits of performance on land and at sea with Cigarette Racing. Inspired by the incredible new Mercedes-AMG GT 63 S 4- door Coupe, the 41’ AMG Carbon Edition impresses with its extremely high performance and its expressive design," said Tobias Moers, chairman of Mercedes-AMG.

The 41' Carbon Edition weighs about 500 pounds less thanks to its lightweight construction, which Cigarette Racing claims severely improves handling during high-speed maneuvers.

The speedboat's earthly counterpart is the Mercedes-AMG GT 63 S 4-door coupe, which rocks a hand-built AMG 4.0-litre V8 biturbo engine that produces 630 horsepower and 664 pound-feet of torque. A customized G3 S was also on display at the Miami Boat show, proudly wearing a livery that matched that of the 41' Carbon Edition.

"The new Cigarette Racing boat underlines the current brand aesthetics of Mercedes- AMG, which makes the passion for aesthetics and power noticeable. The strong brand graphics become symbolic for this experience,” said Gorden Wagener, chief design officer at Daimler AG. "Thus, the Performance Luxury by AMG can also be experienced at sea.”