Formula 1: Mercedes-AMG, Lewis Hamilton Hang on to 2019 Monaco Grand Prix Win by Skin of Their Teeth

It was nothing but a tire-management marathon for the talented Brit. 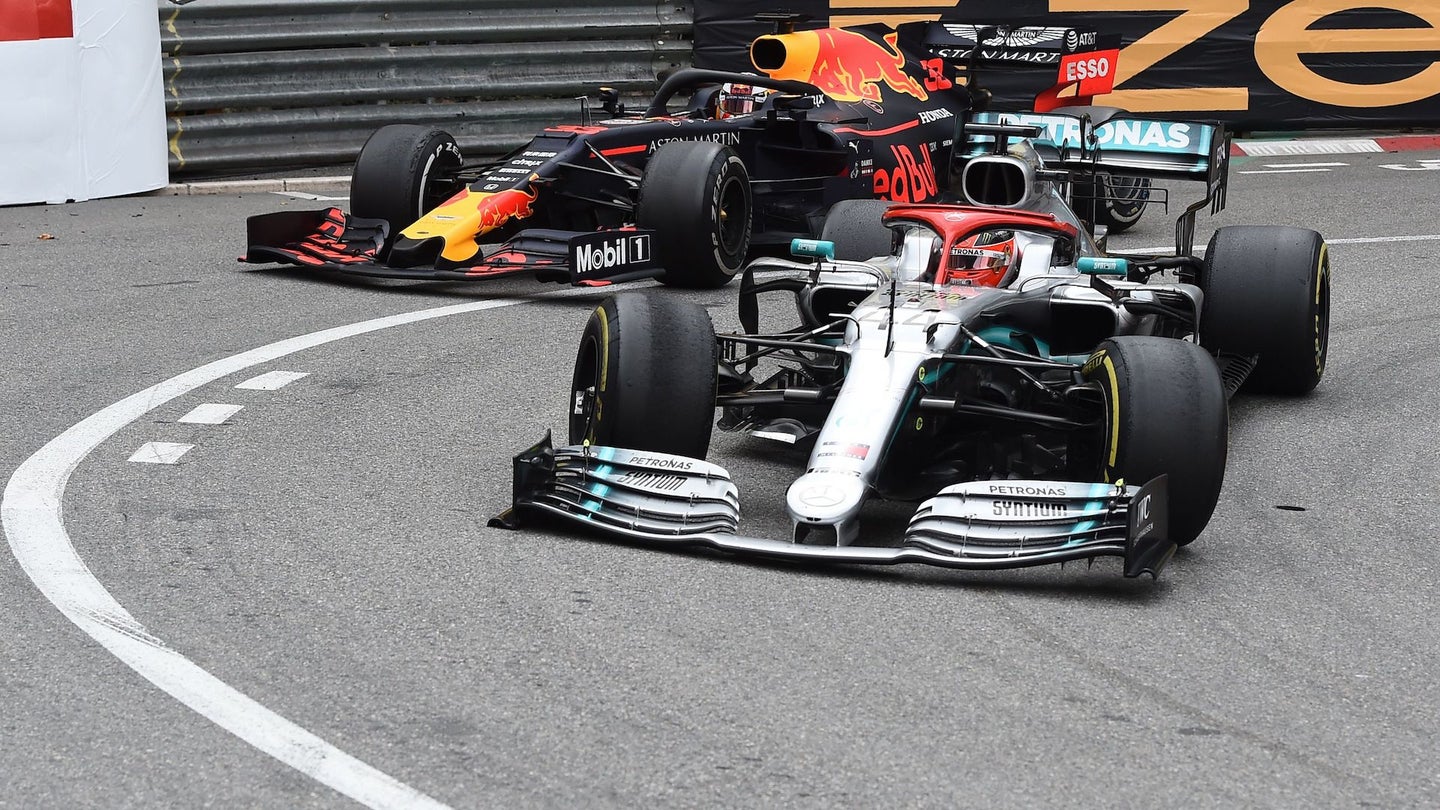 Polesitter Hamilton faced rain as a potential threat to his race win, with pre-race forecasts offering a 90 percent chance of precipitation. Hamilton must have had that on his mind as the lights went out to signal the race's start, with the Brit getting a better getaway than his Finnish teammate Valtteri Bottas. Red Bull's Max Verstappen challenged Bottas into the first corner but backed down when it was clear the Finn wouldn't yield. This trio led Ferrari's Sebastian Vettel and Renault's Daniel Ricciardo up toward turn two, with the Australian sneaking around Haas's Kevin Magnussen in turn one.

As it usually does, the Monaco Grand Prix rapidly turned into a parade, with the frontrunners testing each others' pace but ultimately making no moves. Usual frontrunner Charles Leclerc, stranded out back by a mishandled qualifying session, failed an overtake on Nico Hülkenberg on lap eight and gathering a puncture in the process. The decaying carcass of the hometown boy's tire ripped his floor apart, effectively throwing slivers of carbon fiber around the racetrack and forcing race control to deploy the safety car on lap 11.

With the pack bunched up by the Mercedes-AMG GT safety car all the frontrunners dipped in for new tires. Hamilton took medium tires, predicted to last 50 laps, as did his teammate, though Verstappen and fourth-placed Vettel chose hard tires. Red Bull released Verstappen into the side of Bottas, giving the Finn a puncture, and forcing him to stop for a second time behind the safety car, but this time for hard tires of his own. Race stewards handed Verstappen a paltry five-second time penalty for the incident.

Back in Leclerc's car, the pit wall chattered about keeping him out if the car was still drivable, but when the safety car lifted, he found the opposite to be true. Circumnavigating a spun Williams of Robert Kubica, hit by Alfa Romeo's Antonio Giovinazzi, he struggled with his damaged Ferrari, stopping again after lap 16 to try out soft tires. These fixed nothing; the Monegasque driver reported over radio that "the car is very difficult to drive" before pulling in at the end of his lap to retire the car at his home race.

But Leclerc wasn't the only driver worried about finishing the race. Hamilton told his race engineer on lap 21 that he wasn't sure he could finish the race on his medium tires, which were only rated to last through lap 62 of the 78-lap race. At this point, the Brit probably wished rain would come, giving him an excuse to change tires again, and reports of sparse raindrops indeed came in. Yet these drops never amounted to a downpour, and the lap count kept climbing, Verstappen closing on Hamilton with each passing corner, the mediums burning out faster than expected. Then came the distress signal from car number 44.

"I think I'm in trouble, guys. Left front is dead," Hamilton reported on lap 50, with 28 still to go. He added to his SOS on lap 58, saying that only a "miracle" could bring the tires—and the race win—home. A miracle, it seems, the man of faith got, as he kept Verstappen behind for the following 11 laps before the Dutchman got the order to turn his engine up. Mercedes responded by cranking Hamilton's power unit up too, but it didn't stop Verstappen from catching Hamilton on lap 70, and attempting a dive around the outside.

Hamilton camped on the apex and denied the Red Bull the race lead. An increasingly desperate Verstappen made a mistake entering the second chicane on lap 71, going wide to correct a snap of oversteer, but he caught back up to Hamilton the following lap. Verstappen threw a Hail Mary at Hamilton on lap 76, attempting a dive up the Brit's inside into the first chicane, but he botched it and made minor contact. Hamiltons saw the move coming and dove wide to escape, cutting the corner to evade a race-ending collision. Stewards opened an investigation into the move on the last lap, which saw Hamilton finish ahead of a Verstappen penalized five seconds, and booted off the podium for Vettel and Bottas as a result.

Nevertheless, Verstappen's relentlessness earned him the vote for Driver of the Day, whereas his teammate Pierre Gasly chalked up the fastest lap. Lewis Hamilton and Mercedes-AMG dedicated their victory to three-time F1 champion and former member of the team Niki Lauda, who passed away last Monday after kidney failure.