Sporadic showers made this year's German Grand Prix even better than last year's, and by golly is that saying something. 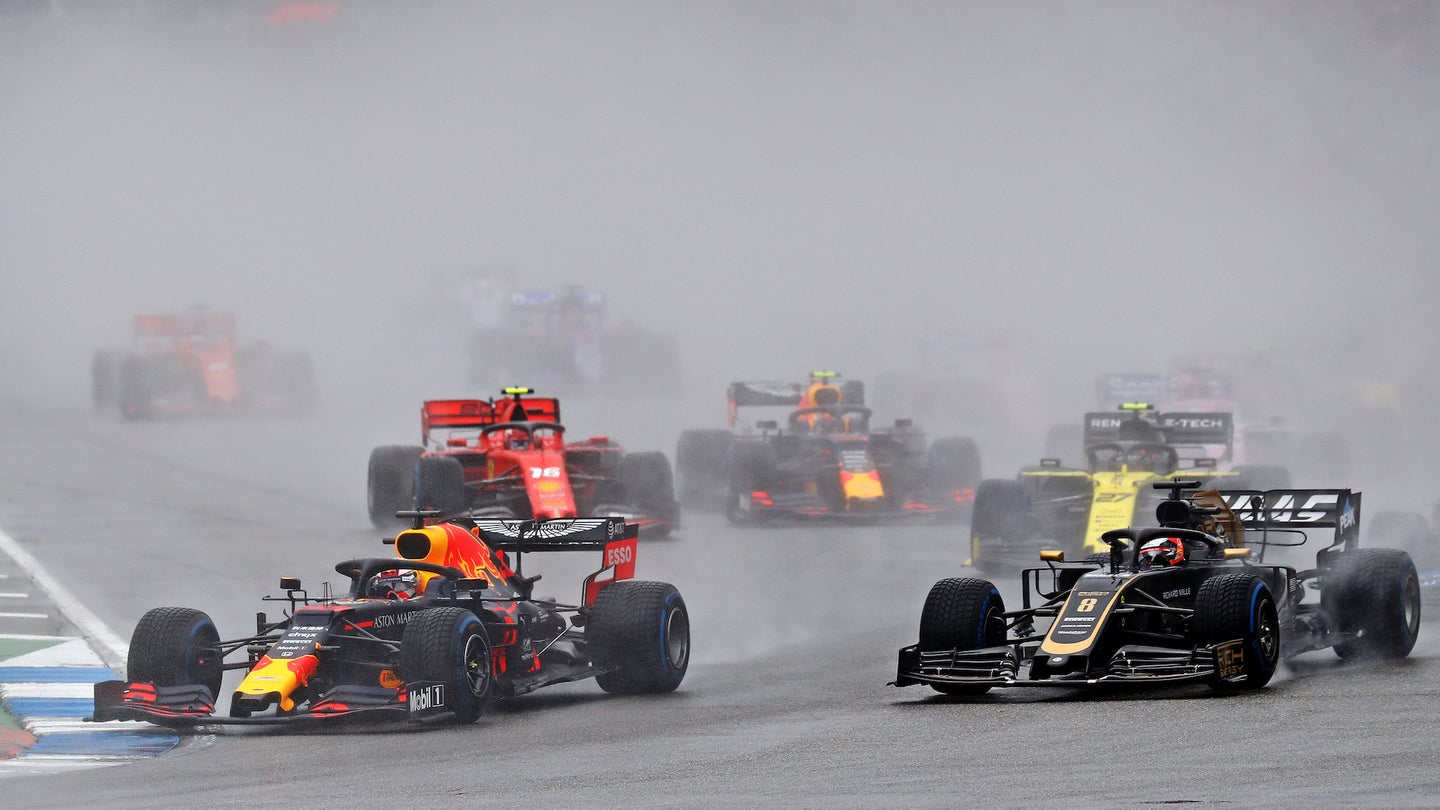 Red Bull Racing's Max Verstappen emerged the victor of a rain-soaked, hard-fought German Grand Prix that saw multiple safety cars and some of the most heartbreaking crashes F1 has ever seen.

It wasn't a win set in stone from the race's start; the Dutchman's terrible launch allowed Mercedes-AMG's Valtteri Bottas and Alfa Romeo's Kimi Räikkönen past before the first corner. Verstappen retook Räikkönen's position in the hairpin on the second lap, and as he built a gap to the Finn, Racing Point's Sergio Perez spun into the wall, bringing out a safety car.

Red Bull brought Verstappen in immediately to change out his full wet tires for intermediates, kicking off a frenzy of stops that saw Ferrari release Charles Leclerc into the path of Haas' Romain Grosjean, for which Ferrari received a fine. Kevin Magnussen and Lance Stroll, who stayed out during the pit stops, found themselves running second and fifth respectively, but when the safety car relinquished the lead, they found themselves on the wrong tires, and immediately began to lose positions. Sebastian Vettel, who started 20th after not appearing in qualifying, broke back into the points this same lap.

Though the race began to settle as drivers found their footing on intermediate tires, it wasn't a condition that lasted. Bottas reported on lap 11 that the racing surface was drying out, leading to speculation that slicks would soon be the ticket. Renault's Daniel Ricciardo retired in a puff of smoke on lap 15, forcing a Virtual Safety Car (VSC) during his car's recovery. Leclerc and Nico Hülkenberg used this opportunity to switch to new intermediate tires without losing much time, and when racing resumed, they were instantly the fastest cars on track.

With weather conditions uncertain, drivers grappled with tricky conditions on degrading tires. Vettel reported his tires were spent as of lap 21, but wasn't pitted, and despite rain returning to the pit lane a lap later, Haas switched Magnussen to a set of soft tires. Ferrari copied the move, putting Vettel on softs the lap thereafter, knocking him down from seventh to eleventh, back out of the points. Hordes more cars followed, including Verstappen and Bottas, who both took medium tires rather than the softs chosen by most of the field.

Both drivers struggled with their slicks, but they soldiered on, unlike Lando Norris's McLaren. A transmission failure on lap 28 took the young Brit out of the race, prompting another VSC, but this turned into a full safety car when Leclerc skated off the track in the track's third sector, beaching his Ferrari in a move that mirrored Vettel's heartbreaking retirement here last year. Vettel himself jumped back onto intermediate tires and as he trundled out of the pits, race leader Hamilton lost control in the same spot as Leclerc.

He destroyed his front wing but avoided the race-ending stranding Leclerc faced, and dove into the pits around the outside of the pylon (for which the stewards issued a five-second penalty). Hamilton then endured a nightmare pit stop, his unready crew scrambling to replace his wing and switch out his tires. By the time he returned to the track, Hamilton was fifth, adrift of Bottas, Verstappen, Hülkenberg, and even Toro Rosso's Alexander Albon. Bottas himself switched to intermediates soon thereafter, drifting his entire way through the slick pit entry.

When racing resumed at the end of lap 33, Hamilton gunned for Albon's position, the Thai-Brit driver in his first-ever rainy Grand Prix. Albon admirably staved off an overtake attempt in Hockenheim's hairpin, but couldn't hold back Hamilton much longer, and lost position in the same spot on lap 36. A lap later, Bottas used DRS to zip past Hülkenberg into the same hairpin taking second, and the lap thereafter, Hamilton copied the move taking third.

Hülkenberg, presumably knowing that he could still finish on the podium if he stayed within five seconds of Hamilton, kept pushing—possibly too hard. On lap 41, Hülkenberg went off in the same spot as Leclerc and Hamilton, jamming his Renault into the wall, ending one of his best-ever chances at a podium finish.

Again, the safety car came out, and again, Verstappen stopped for intermediate tires, keeping the race lead. Vettel also took new intermediates, but didn't fare as well, exiting the pits tenth. Racing Point drew stares when it pitted its sole remaining driver, Lance Stroll, for a set of slick tires on lap 45 in a Hail Mary attempt at earning some points in this bizarre race. Stroll exited far behind the pack, which let him thrash his tires to warm them as the field approached the end of the safety car period.

Hamilton reported his tires to be in poor shape, pitting after lap 47 and, presumably, Verstappen felt the same about his own tires. The Dutchman stopped for a set of slicks a lap into the restarted race, leading Vettel, Räikkönen, and Antonio Giovinazzi into the pits. Somehow, this yielded the race lead to Lance Stroll, who became the first Canadian since Jacques "Foolin' Around" Villeneuve to lead a Grand Prix. He didn't hold on to the lead long, as Verstappen retook the race lead after a few corners, but for a brief, glorious moment, everyone's favorite meme driver led a Grand Prix.

Hamilton served his five-second penalty during his pit stop and rejoined the race a distant 12th, wondering where his race went so wrong. Verstappen wondered how his went so right as he set the fastest lap of the race, but the best lap was immediately taken from him by Toro Rosso's Daniil Kvyat, who was somehow running third. The Russian's teammate Albon wasn't far behind in seventh, adrift of Red Bull's second fiddle Pierre Gasly. Albon took Gasly by the scruff of the neck before threading his way past Magnussen and, as he did so, Kvyat worked up an overtake on Stroll to take second place. As all this went on, Giovinazzi went purple to take the fastest lap of the race.

Things continued to go south for Mercedes at its home race, with Hamilton spinning off at turn one on lap 53. He saved the car but called it quits on his tires and stopped for a new set, emerging 15th. Vettel clambered past Albon to take sixth on lap 54, his race at last going how he wanted, but nigh was the end of Bottas'. On lap 57, Bottas spun at turn one like Hamilton, but unlike the Brit, the Finn's car speared into the wall, breaking its suspension and front wing. Yet another safety car was deployed, and Hamilton stopped for the sixth time, fetching new tires to chase the race's fastest lap.

When the safety car dipped out, Vettel made the most of the tightened field and lunged past McLaren's Carlos Sainz for fourth place on lap 60, while Albon set up a move that saw him retake sixth from Gasly. Vettel zoomed past Stroll with the aid of his Drag Reduction System on lap 62, taking the bottom podium position, and Gasly tried to whip around Albon, but instead broke his front wing on Albon's rear tires and retired from the race. Vettel used DRS to saunter past Kvyat, taking the second podium step, effectively slashing the zero off his starting position to achieve his finishing position of second.

Verstappen took home the fastest lap and finished the weekend with 26 points, extending his advantage over race runner-up Vettel in the championship. Vettel redeems himself for a poor 2018 result with his last-to-second performance, but the real congratulations all belong to Daniil Kvyat. Not only did he arguably drive the best race of his career in his only chance at a comeback season, but he also revealed during post-race interviews that his first child—a daughter—was born the night prior. While there'll be no forgetting this weekend for any of the podium finishers, Kvyat in particular has reason to remember it fondly.