By getting a better start than Hamilton, Bottas had all he needed to scramble ahead of his polesitting teammate. 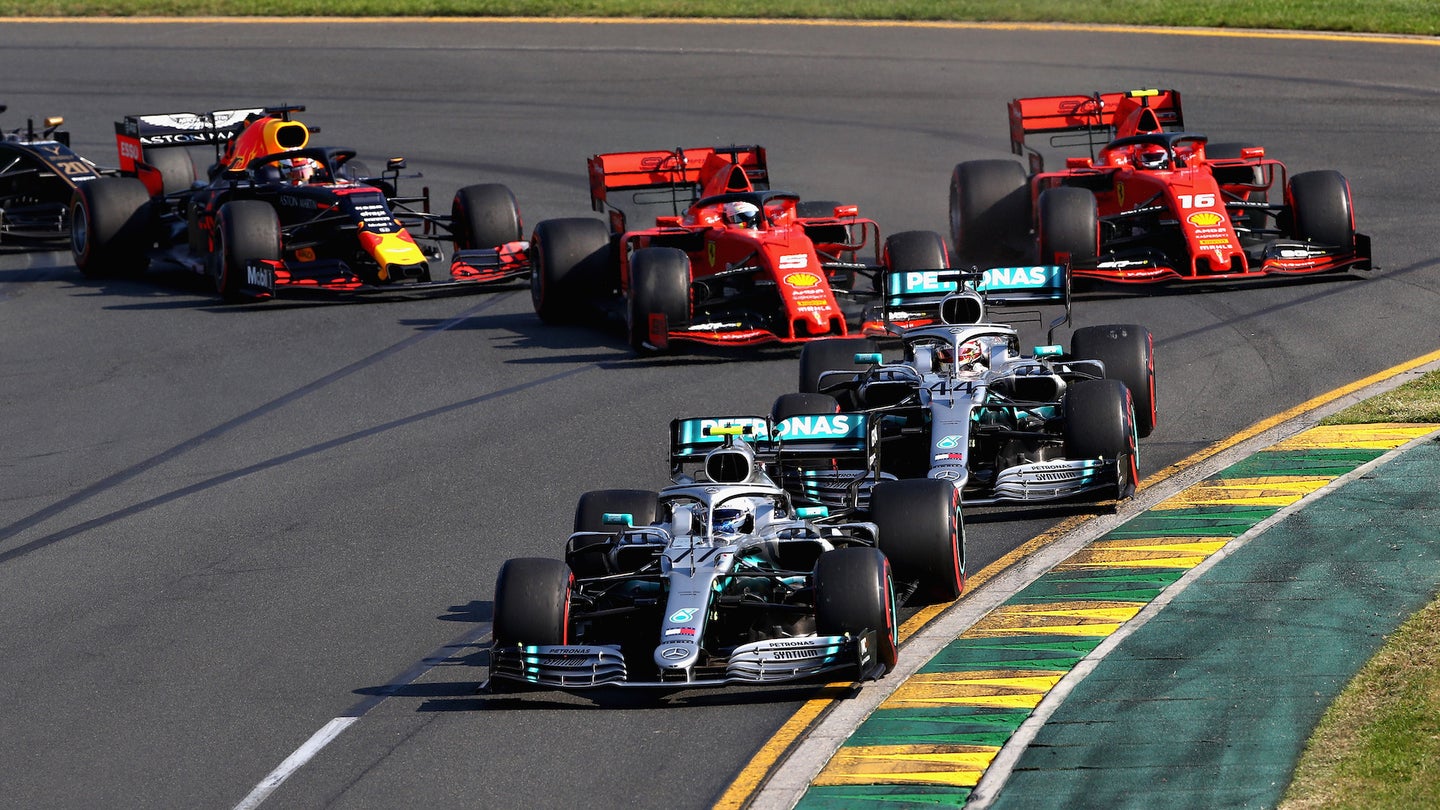 Bottas started on his journey to the top of the podium by managing a better launch than his polesitting teammate Lewis Hamilton, with whom he shared the front row. As Bottas pulled alongside, then ahead of Hamilton, homeland star Daniel Ricciardo of Renault dodged the slower Racing Point of Sergio Perez and hit a deep, unsighted gutter just off the side of the track, destroying his front wing.

Into the first corner, Bottas commanded track position, followed closely by Hamilton, then both Ferraris with Sebastian Vettel in the lead and an antsy Charles Leclerc backing off from an attempted swoop around the outside of Vettel. Max Verstappen closely tailed Leclerc, having lost a position to the Monegasque driver at the race's start. Verstappen’s former Red Bull teammate Ricciardo, his front wing gone, scarcely managed to stop in time for the first corner.

While Bottas assembled a gap to Hamilton, Ricciardo pitted for a new front wing and was informed of damage to his bargeboards. Though the Aussie's car was terminally damaged—he would retire early on lap 31—he would not be the first DNF, as the McLaren of Carlos Sainz Jr. on lap 11 popped a plume of white smoke that turned into a blaze as orange as the car's livery, suspected to be an MGU-K failure.

Alfa Romeo kicked off the pit stop scramble on lap 13 by bringing Kimi Räikkönen in for a set of medium tires, onto which Vettel and Haas' Kevin Magnussen would follow the next lap. Another lap later, Hamilton picked up mediums of his own, followed by Romain Grosjean, whose mechanics struggled to attach his front left wheel. He would return to the track just ahead of Alexander Albon, who would attack Grosjean's position—unsuccessfully.

The Frenchman ended up a short distance back from a train forming behind Alfa Romeo's Antonio Giovinazzi who, having not pitted, had track position but was struggling with tires. Magnussen moved on the Italian, but the Alfa driver held up at first, being as stiff with Magnussen as the Dane is known to be with most drivers. Ultimately, Giovinazzi would check his mirrors at the wrong part of lap 18 and overcook a corner, allowing Magnussen through. Nico Hülkenberg also squeaked by with the aid of DRS on the pit straight, though McLaren's Lando Norris wouldn't be so lucky and would struggle to surmount Giovinazzi until lap 27.

Meanwhile, Bottas was called in from the race lead after his 23rd lap for a set of mediums, and exited just behind the leading Verstappen. This Dutchman would himself stop two laps later for mediums as well, and come out fifth adrift of Vettel. Leclerc dipped in for hard tires, having run out of mediums, and exited fifth behind a Verstappen rapidly closing on Vettel. By lap 31, Max was ready to make his move and snapped up third from the German while Grosjean rolled to a bitter halt, a loose front left tire echoing Haas' ugly double retirement last year.

Leclerc ate up the gap between himself and Vettel at a rate sometimes exceeding a second per lap, but early on lap 51, was told to stand down by Ferrari management over his radio. As fans wondered why Leclerc hadn't passed Vettel despite having the pace to do so, Bottas radioed his pit wall to ask for permission to shoot for the fastest lap—worth an extra point in 2019—and was given approval. Seizing the opportunity to do so on lap 57, Bottas laid down the fastest lap with a 1:25.580, securing himself the cherry on top of the race win that defined his Sunday.

Bottas for his sharp start, dominant pace, fastest lap, and win, was voted Driver of the Day by fans and takes a commanding lead of the 2019 World Drivers' Championship. Australia marks his fourth race victory and first since the 2017 Abu Dhabi Grand Prix, having been taken out of contention for wins multiple times in 2018 by no fault of his own.

The Finn shared the podium with Hamilton and Verstappen, the latter of which scored the first podium for a Honda-powered car in over a decade, Rubens Barrichello at the 2008 British Grand Prix being the last driver to achieve such a result.