Ruined races mean wasted weekends...or worse. The squeamish among you shouldn't scroll to the bottom. 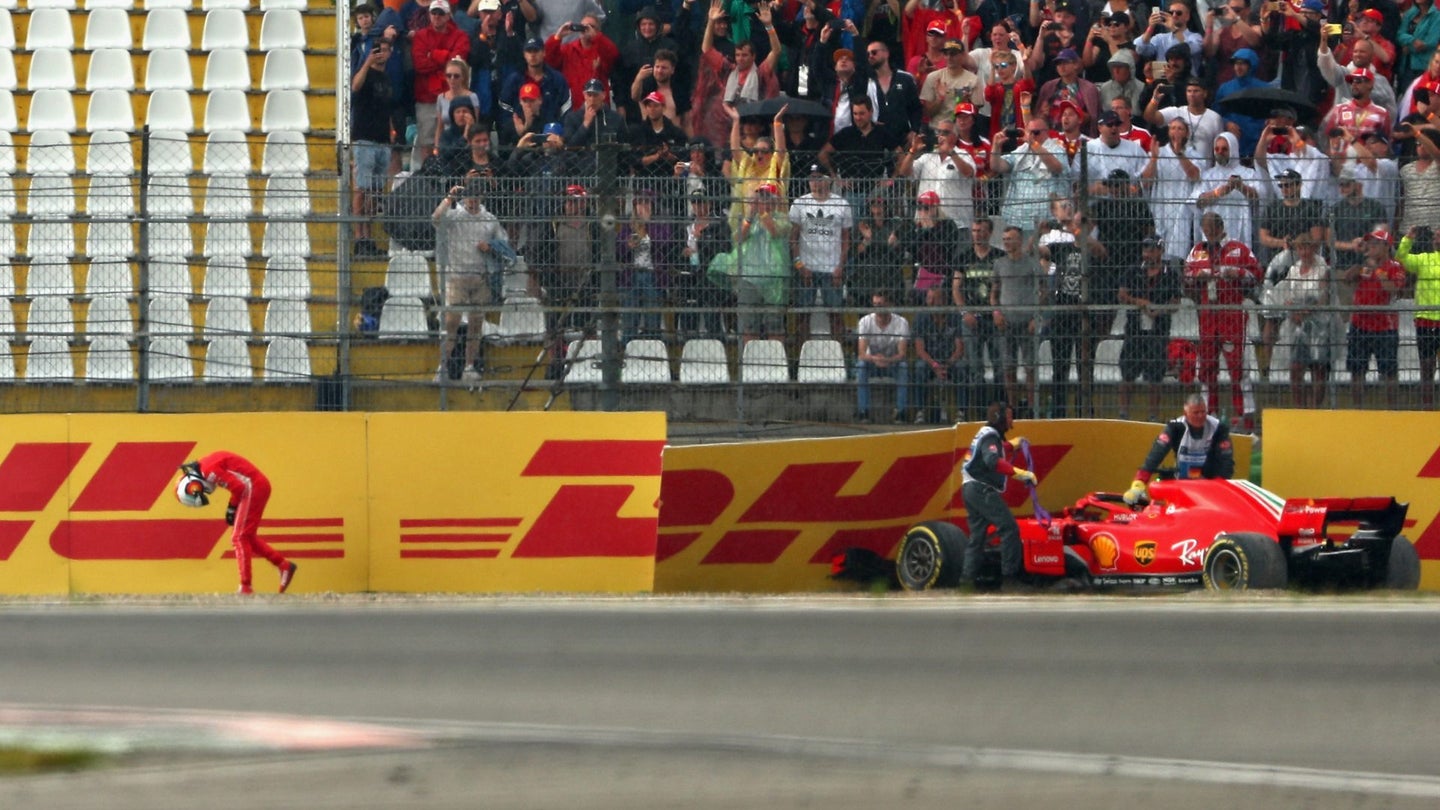 The 2018 Formula 1 season was a banger of a year. The championship lead changed hands five times in eight Grands Prix, and even after Lewis Hamilton charged away with the title lead after Italy, the fans still enjoyed plenty of brilliant driving in Singapore, Mexico, and Brazil.

But highs always come with lows, of which 2018 wasn't short. There were enough hardships to force multiple ugly incidents—the near-demise of Force India over summer break, repeated boneheaded mistakes by Max Verstappen, and Kimi Räikkönen's Ferrari career ending with a whimper—off the list completely.

Australia and America have a lot in common. (Both are former colonies of Britain with four-syllable names bookended by the letter A, for example.) For that reason, perhaps, Haas must have felt it had the home field advantage when it qualified a healthy P6 and P7. Rapid early-race overtakes and a spin by Max Verstappen put Haas's drivers P4 and P5, on track for its best-ever finishes in F1.

And then it came time for pit stops. Magnussen stopped by the garage for a fresh set of tires, but left with a cross-threaded wheel nut. He was instructed to pull over and retire while Grosjean got the command to pit, which ended the same way. While team principal Gunther Steiner briefed media on the cause of its misfortunes—a lack of pit stop practice—good guy Grosjean hunted down the teary mechanic whose mistakes cost the team so dearly to console him.

A colossal crash at the start of the Belgian Grand Prix, in which Fernando Alonso and a French speaker are implicated. The last time we heard that horror story was at the 2012 Belgian race, which arguably decided the championship that year. This time around, the stakes were lower, but the crash no cleaner.

Nico Hülkenberg's lockup sent him into the back of Alonso, who dominoed into Charles Leclerc and over the top of the Monegasque driver. FIA analysis of the accident concluded that had the halo not redirected the errant McLaren, its front wing would have plowed into Leclerc's visor, potentially killing the rookie. Eerily, the halo that prevented Leclerc's possible incapacitation was made mandatory by the fatal crash sustained in 2014 by none other than his godfather, Jules Bianchi. Though multiple drivers' races were ruined, the crash had a profound effect on how the halo was received by the public.

Soon-to-be Renault driver Daniel Ricciardo had to deal with eight retirements across 21 Grands Prix in 2018. It's not a record, nor is it unheard of in recent history—Carlos Sainz Jr. had just as many in 2017—but when compared to his competitors in the top teams, it gets ugly. Verstappen, Vettel, Räikkönen, Hamilton, and Bottas together endured ten retirements combined.

Ordinarily, Ricciardo's MGU-K failure in Monaco would have meant an additional DNF, but he had the race lead and dirty air on his side, which let him hold onto the win. Monaco was Ricciardo's second and last podium appearance of 2018, meaning that for the first time since Jochen Rindt in 1970, a driver had multiple race wins but no other podium finishes.

Max Verstappen was sailing away with the race lead in Brazil when Esteban Ocon decided to loop around the outside of turn one with the aid of DRS. Verstappen didn't expect the Frenchman to hold on into the entry of the next corner, so when he sliced in at the apex, there was a Racing Point VJM11 in his way. Both spun, and Verstappen had to watch as Lewis Hamilton retook a lead he wouldn't relinquish.

Each driver had a lesson to learn: Don't put everything on the line when there's little to gain. Verstappen had a race win to lose by fighting the pass, while Ocon didn't even have points at stake.

Maybe it's the track. Maybe it's the hometown atmosphere. Maybe it's just the water. Whatever the reason, the British Grand Prix is perennially one of Lewis Hamilton's best races. He's won the British GP four times consecutively between 2014 and 2017, and with a tremendous pole lap in 2018, everything was in place to make that five straight home race wins.

A poor start meant Vettel and Bottas squirted past in the first two corners, giving Hamilton the company of Kimi Räikkönen into turn three. Despite leaving the Finn space on the inside, Kimi went wide, spinning Hamilton. Hamilton rejoined in a lowly 18th, and though he recovered to a stellar second-place finish, it wasn't the result any of his fans were there to see.

Team orders have long been an unsavory way to alter the results of a race, no matter who benefits. It's only more displeasing when they're used to favor the weaker performer on a given weekend in the name of deciding the championship.

Valtteri Bottas was no stranger to team orders in 2018, as the team utilized them to keep him behind Hamilton for a picture-perfect one-two in Germany. Having a chance at a race win is one thing...but having your win yanked from your hands, as Mercedes did to Bottas in Russia, is another. The Finn qualified on pole, and held the race lead until lap 26 when the above radio message came through. Mercedes stoked the fire of controversy about team orders, and Valtteri walked away with the underwhelming consolation prize that was the fastest lap.

As ugly as team orders are, Bottas could be comforted by the knowledge that they weren't the idea of his teammate Lewis Hamilton, and that the orders came down for the greater good of bringing his teammate closer to a fifth title. There is no comfort to be had in giving your all and coming away empty-handed, as Bottas did at the Azerbaijan Grand Prix.

Staying cool after the final safety car period of another chaotic Baku race, Bottas maintained a healthy race lead, but his rear right tire ate a piece of debris on the long main straight. With a puncture, the Pirelli ripped itself to shreds, and Bottas had to retire his car from what was effectively the lead. He was classified, and again managed the fastest lap of the race—but with no points to show for it, this was an even more miserable end to a race than in Russia.

Sebastian Vettel is a man with a fiery heart. That, combined with his sense of humor, have drawn him a loyal international fanbase comprised of Germans and Tifosi, both of whom gathered in force at the German Grand Prix. A race of mixed conditions, nobody could quite figure out which tire compound was best. Intermediates overheated, and slicks behaved as their name implied.

Ultimately, slicks were faster, but proved hard to handle, as Sebastian discovered on lap 52. An itty-bitty bout of oversteer forced Vettel to make a correction that sent him wide, over the gravel, and into the wall. His front wing was destroyed, his car beached, and his race was over. Sebastian was livid with himself, and fought tears as he apologized to his pit wall before climbing from his Ferrari to kick gravel.

Be advised: This is a bit graphic.

Kimi Räikkönen stopped on lap 36 of the Bahrain Grand Prix for tires, but the left rear mechanic had a problem getting the wheel back on. In a lapse of focus, another mechanic by the name of Francesco Cigarini put his leg in front of the rear tire, and when the lollipop man gave an inaccurate all-clear, Kimi did as instructed and rolled away—over the top of Cigarini's leg.

It was a grisly accident, and easily the worst in Formula 1 since Jules Bianchi's crash at the 2014 Japanese Grand Prix. Cigarini was fortunate enough to receive immediate medical care, and was hospitalized for emergency surgery. He recovered well, and was already on crutches the following Monday. He appears to have since healed enough to return to work as a Ferrari mechanic, as he has been spotted at multiple Grands Prix since.