Hamilton became the first driver ever to score more than 400 points in a season at a race that saw several sentimental farewells. 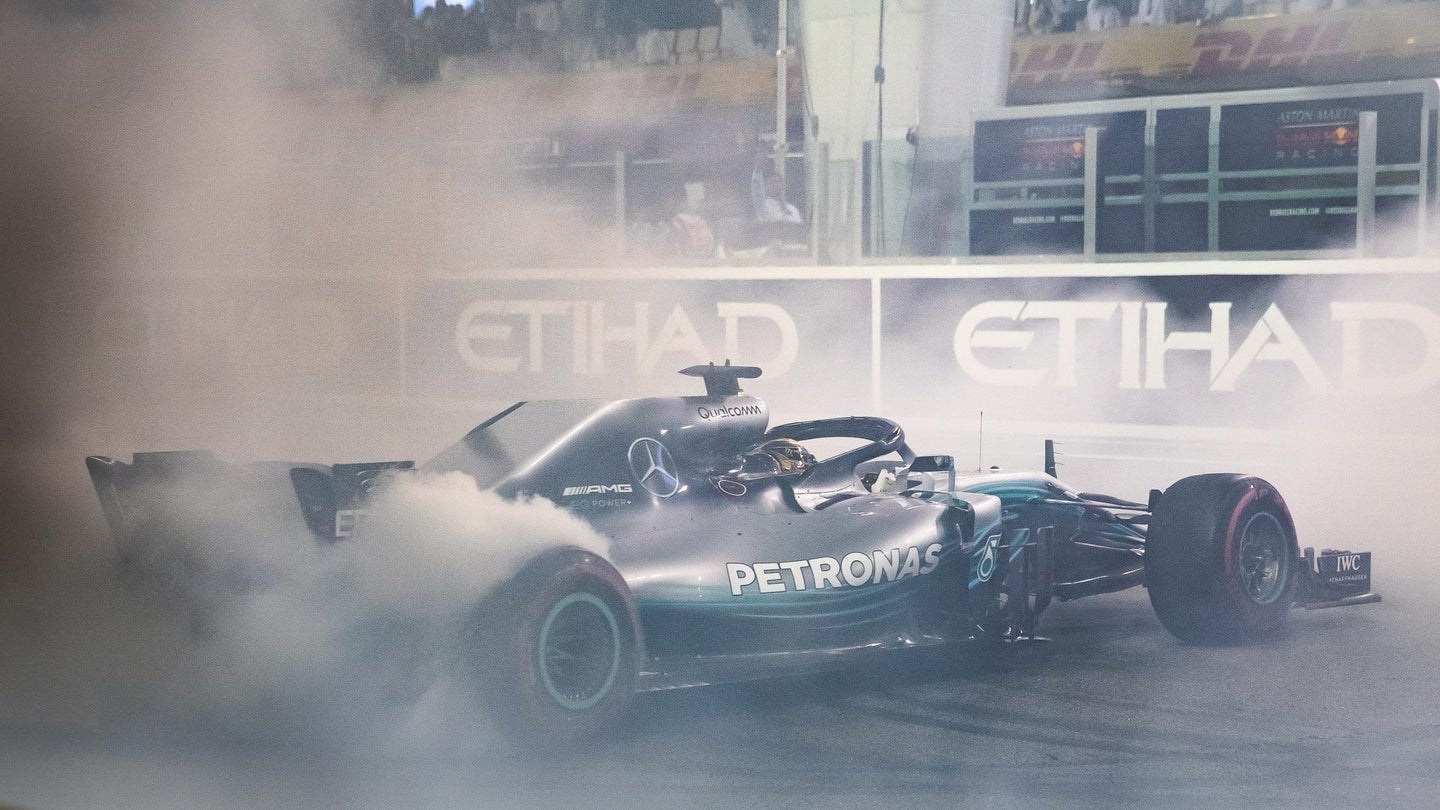 Mercedes-AMG driver Lewis Hamilton won the 73rd Grand Prix of his Formula 1 career at the 2018 Abu Dhabi GP, tying his own 2014 record for most race wins in a season (11), and becoming the first driver in the sport's history to exceed 400 points in a single season. Below is how it came to pass.

Hamilton got a better start than his teammate Valtteri Bottas, but all other frontrunners started better than Max Verstappen of Red Bull Racing, who lost multiple positions on the opening lap. Loss of position is preferable to the fate that befell Renault's Nico Hülkenberg, who cut in on Haas' Romain Grosjean at the exit of the chicane separating the backs straights, climbing Grosjean's tire and violently rolling his R.S.18 into the wall.

Hülkenberg frantically radioed the pit wall requesting removal, but the place where his Renault came to a rest made extrication difficult. The race doctor confirmed Hülkenberg to be without a neck injury before a crowd of marshals flipped the stricken car back on all fours, after which Hülkenberg was able to clamber from the cockpit. Grosjean radioed his own pit wall to make sure Hülkenberg was fine, and though the stewards investigated the incident, they deemed it unworthy of punitive action.

The crash prompted a safety car, under which Toro Rosso-Honda's Brendon Hartley stopped for a new front wing and supersoft tires, becoming the first driver to take fresh rubber, which was expected to last to the end of the race.

While waiting for the safety car to bow out, Verstappen's engine started to overheat and he was unready when racing resumed. His hot power unit allowed both Force Indias to prey on him down the first back straight, though the issue resolved itself almost immediately thereafter, and the Dutchman retook Sergio Perez for ninth. The next lap, he lunged past Esteban Ocon in the hairpin but lost position to the Mercedes-powered VJM11 again on the straight. He returned fire with DRS on the second back straight, sealing his overtake for eighth with entry into the third sector.

Kimi Räikkönen lost power at the tail end of Lap 6, and his final Grand Prix with Scuderia Ferrari came to a quiet halt on the pit straight. This activated a Virtual Safety Car (VSC), which allowed Hamilton, Charles Leclerc of Alfa Romeo Sauber, and Grosjean to switch to supersoft tires with less time lost, exiting fifth, 14th, and 18th respectively. With Räikkönen's car removed, the VSC deactivated before the end of Lap 8.

Hamilton shot past Verstappen on the first back straight on Lap 9, but Verstappen used DRS to slingshot back ahead, where he would stay, and even increase his gap to Hamilton. He drew up on the leading RB14 of Daniel Ricciardo, getting within DRS range on Lap 14. Sebastian Vettel made his own stop for red-walled supersoft tires after 15 laps, while Bottas followed two laps later for a set of his own. Verstappen followed, his stop a brief 2.08 seconds, allowing him to rejoin in fifth ahead of Vettel.

Rain threatened on the radar around Lap 23, and it indeed fell on the circuit, but high track temperatures prevented it from pooling enough to warrant intermediate tires. Marcus Ericsson retired from his final Grand Prix on Lap 26 with a loss of power, and his fellow Indianapolis-bound driver Fernando Alonso made his pit stop for supersofts, exiting the pits 17th.

Ricciardo gave up the race lead after Lap 33 for tires of his own and exited the pits fifth. Bigger losses were to come for Bottas, who began to struggle with handling, and had to permit Vettel past on Lap 35. He continued to founder, and Verstappen pounced in the chicane at the end of the second back straight on Lap 38, making minor contact, but the Dutchman got off scot-free and stayed ahead of the faltering Finn.

Ricciardo too took advantage of Bottas' problems a lap later, plunging through the inside of Bottas into the chicane separating the back straights. He would hold on to the position across the second back straight, and Mercedes would force Bottas to pit a second time in response on Lap 40, this time for ultrasofts, having detected a problem with one of Bottas' rear tires.

Ocon bemoaned a lack of rear grip on Lap 46 with a thin plume of smoke trailing from his VJM11. His engineer identified the problem as an oil leak and told Ocon to pit, but the car lost power entirely, and came to a stop in the pit entry, blocking it. This ended Ocon's final Grand Prix for the knowable future on a sour note, but he wouldn't be the only Frenchman retiring from the race with power problems. Pierre Gasly's STR13 sprouted a similar, but thicker cloud of smoke on Lap 48, which his pit wall addressed with an order to box, but updated with the urgent request to halt the car wherever was safe—which happened to be outside Turn 14, forcing yellow flags in both Sectors 2 and 3.

Alonso, who had fought hard to get to eleventh, was instructed to crank his Renault engine to the max on Lap 52 to chase down Kevin Magnussen, with the hopes of scoring a final career point. He immediately set the fastest second sector of the race, albeit with an overshot corner, which he accidentally repeated, incurring the stewards' wrath. Even if he had managed to pass Magnussen, he would have faced a five-second time penalty for his exuberance, putting an end to the chase for his last point.

When the checkered flag fell and the fireworks flew, Hamilton came home the victor, followed by Vettel and Verstappen on the podium. Hamilton and Vettel made for a donutting duo on the cool-down lap and were joined by Driver of the Day winner Alonso in a parade formation, capping off the Spaniard's illustrious F1 career that featured 32 GP wins and two World Drivers' Championships.

The popular young racer crashed during her first exhibition run of the night.