A scruffy first lap may have an effect on who wins this year's championship. 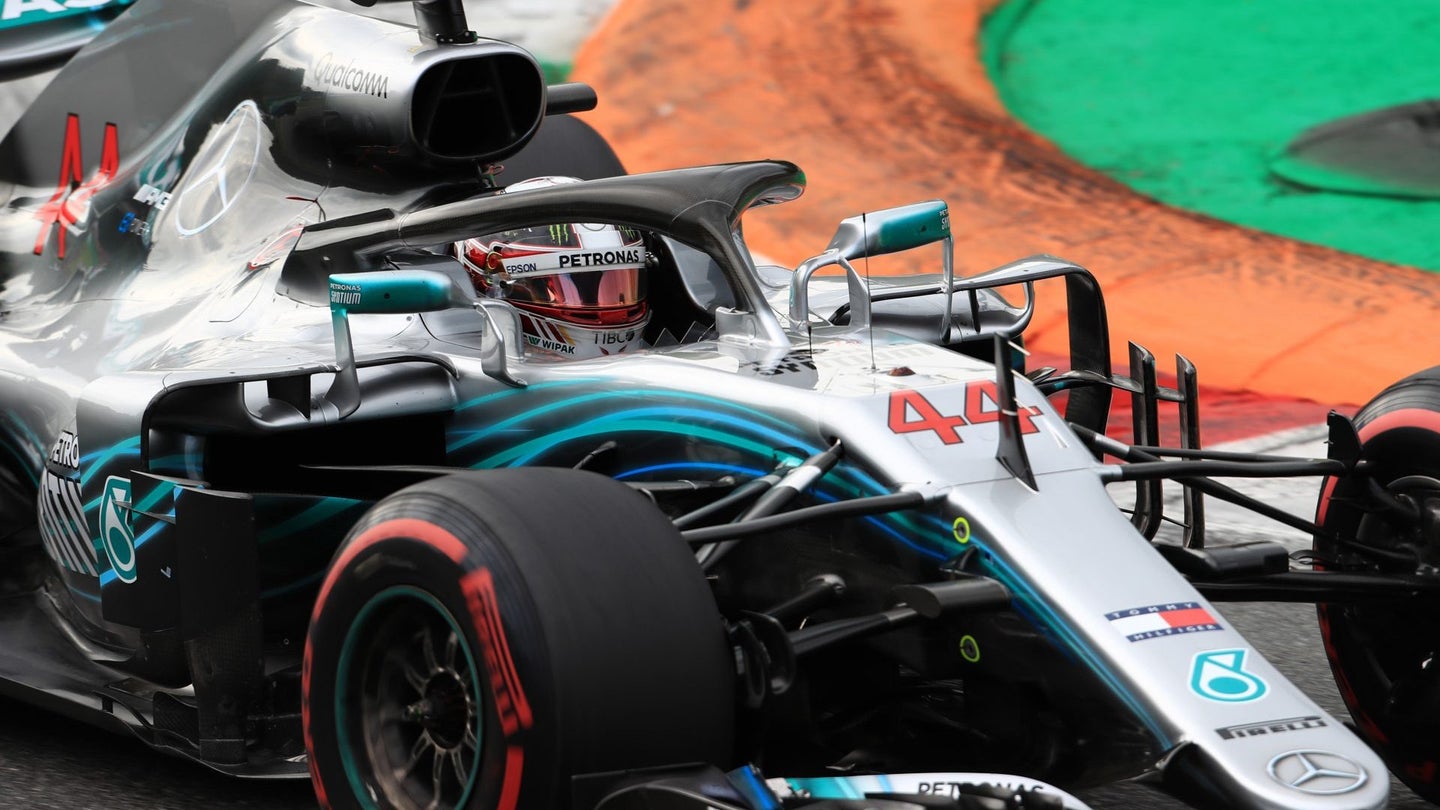 Mercedes' Lewis Hamilton emerged the winner of the Italian Grand Prix—a race with no shortage of skullduggery.

When the red lights went out, the red cars went wild at the Italian Grand Prix. Ferrari’s Sebastian Vettel got a better start than gridmate Kimi Räikkönen, challenging him into the first corner, but not quite getting past, allowing Hamilton to stay close to the pair's rear. Both Hamilton and Vettel chased Räikkönen through Curve di Lesmo, and used his slipstream to draw closer. Vettel and Hamilton entered two-wide into the second chicane, making small contact and spinning insider Vettel off to the left with barge board damage. Stewards deemed the collision a racing incident and took no further action, while Hamilton's former teammate and bitter rival Nico Rosberg vouched for the Brit over the broadcast.

Between the Hamilton-Vettel collision and the coming-together that ended Brendon Hartley's race before the first corner (he was caught between Stoffel Vandoorne and Marcus Ericsson), a safety car was deployed while marshals cleared debris, allowing some drivers to pit early for tires with nearly no consequence. The safety car bowed out at the end of Lap 3, releasing the race leaders again.

Hamilton was hot on Räikkönen's tail as soon as the Drag Reduction System was enabled, and while he closed the gap, Kevin Magnussen attempted to squeeze Esteban Ocon through Lesmo, damaging his own barge boards in the process. Hamilton tagged along close to Räikkönen for lap after lap, never quite making any moves, during which Fernando Alonso retired with engine issues, on his tenth lap.

All the while, Vettel made up ground, recovering to a points-scoring position on Lap 14 with his pass on Williams rookie Sergey Sirotkin. Two laps later, he would claim Sirotkin's teammate Lance Stroll, and though he would botch an attempt on Sergio Perez another lap afterward, it would succeed the following time. By the time he elbowed past Carlos Sainz of Renault for seventh on Lap 20, Räikkönen was called into the pits for new soft tires, exiting in fourth and prompting Mercedes to order up a serving of "Hammer Time."

Ferrari responded by telling Räikkönen to push, and Hamilton spent the next several laps burning through what remained of the supersoft compound three on which he started the race. Scattered complaints of rain on Lap 24 would amount to nothing, and Vettel would inherit Romain Grosjean's position when the Frenchman stopped for tires, allowing a successful attack on Esteban Ocon, allowing Vettel up into fifth. Red Bull’s Daniel Ricciardo became the Grand Prix's final retiree in a cloud of smoke, his clutch toasted.

Dark horse Max Verstappen stopped for softs on Lap 26, and two laps later, Hamilton would too at last, exiting behind Räikkönen. Vettel made another stop—this time for supersofts—a lap later, sacrificing positions he would easily make up again with the red-sidewalled tires on his Ferrari. Vettel's teammate struggled with a strategically-placed Valtteri Bottas, whom Mercedes kept out as an obstacle for Räikkönen. This allowed Hamilton to close to gap to the leading Ferrari driver, and forced Räikkönen to ask everything of his tires, which blistered up and began to wear out. By the time Bottas made his stop on Lap 36 for soft tires, Räikkönen's tires were overcooked, and they would only worsen as the laps piled up.

Chasing Verstappen on Lap 43, Bottas made a move on Verstappen, who pinched the Finn too much and made contact, pushing Bottas into the runoff area. Already on the stewards' radar for a questionable defense earlier in the race, Verstappen was given no benefit of the doubt, and slapped with a five-second time penalty. Indignant, the Dutchman lashed out at the stewards, accusing them of "killing racing!"

On Lap 45, Räikkönen's tires could reign in Hamilton no longer, allowing the Brit past into a lead he would not relinquish. Verstappen ran out of gap on Lap 51, both Bottas and Vettel within five seconds, effectively relegating him to fifth. Räikkönen received a command over the radio to avoid curbing, as the engineers were concerned about a "critical" vibration their instruments detected. Eager to avoid a repeat of the 2005 German Grand Prix, wherein Räikkönen's car shook itself apart after flat-spotting a tire, the Finn complied, his position not at risk.

Hamilton stood atop the podium in his 222nd Grand Prix, Räikkönen second for his 100th podium appearance of his career, and Bottas third, flying in formation with Hamilton on the cool-down lap as instructed by the pit wall, to rub its victory into the Ferrari-supporting home crowd. As a consolation prize, Kimi was voted Driver of the Day by fans.