Both Mercedes drivers flew in formation in Friday practice, getting a start to the weekend that could worry Ferrari. 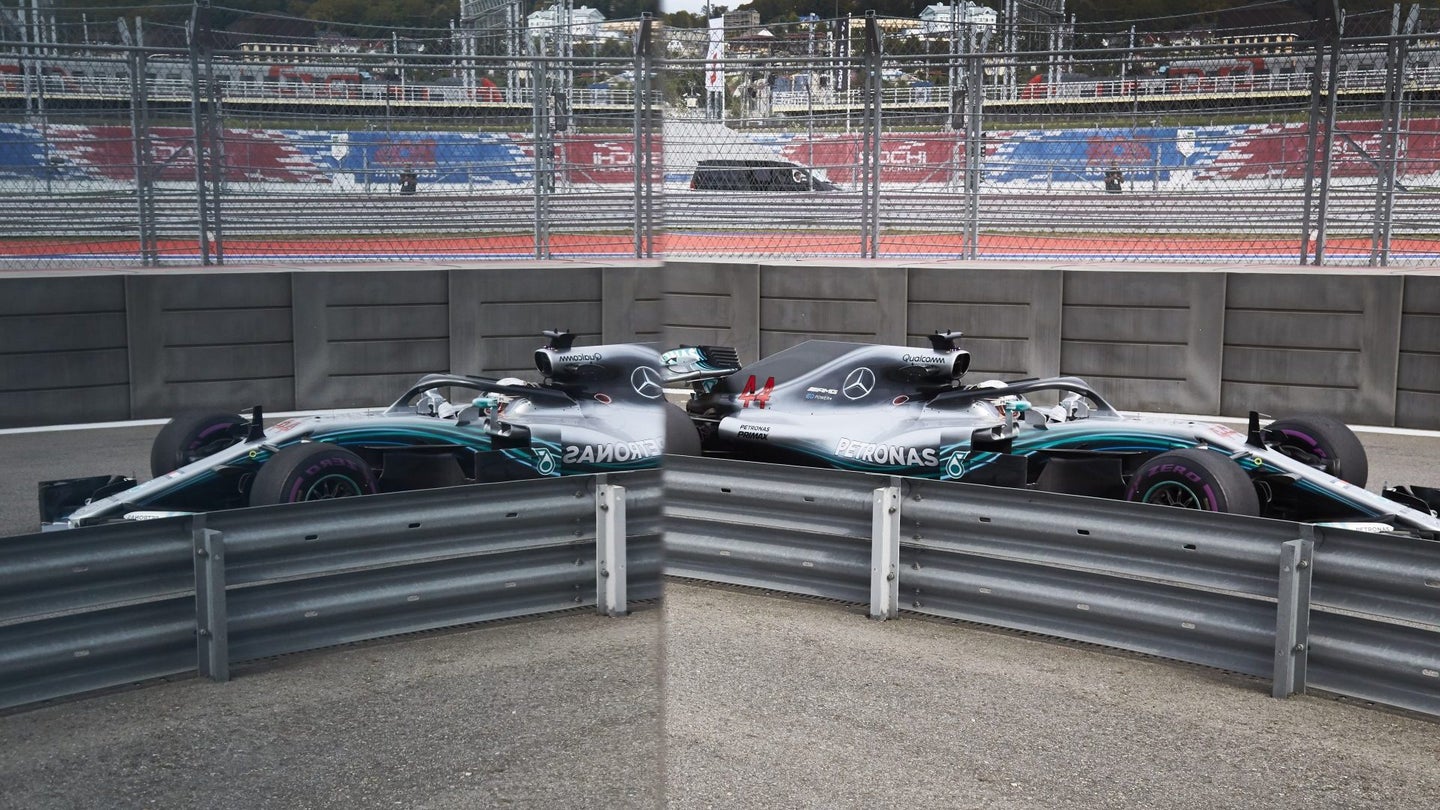 Nearest the leading Silver Arrows so far, but still trailing by more than two tenths are both Red Bulls, nary two hundredths between Max Verstappen and Daniel Ricciardo. Just over a tenth behind the leading bull was the faster of the two Ferraris, Sebastian Vettel more than a half-second off the pace of provisional leader and championship rival Hamilton. His Sauber-bound teammate Kimi Räikkönen was the only driver from the top three teams not to limbo under the 1:34 bar.

The three leading grid slots have been repaved since the 2017 Russian Grand Prix, and Mercedes was spotted doing practice starts on another patch of new asphalt in the pit lane. Some also claim to have seen Red Bull practicing starts there as well.

Despite missing the morning practice session so Force India's development driver Nicholas Latifi could have a spin in the VJM11, Sergio Perez emerged in the afternoon as the best of the rest, though still slower than the frontrunners by more than seven tenths. A surprising eighth was Pierre Gasly of Toro Rosso-Honda, his pace potentially buoyed by a Honda engine upgrade which Motorsport reports has been deployed in both STR-Hondas this weekend. Spanish journalist Albert Fabrega reports that this upgrade is potentially worth up to 40 horsepower.

Gasly's teammate Brendon Hartley has not capitalized on the Honda upgrades as well, and is almost 0.9 seconds off the Frenchman, though that means that the strategically-taken grid penalties (so Honda can prepare for a strong homeland performance in Japan) for the new engines will not sting as badly for the Kiwi. Force India's Esteban Ocon comes in just one hundredth behind Gasly, and Marcus Ericsson (who missed FP1 to let his replacement Antonio Giovinazzi drive) hit the ground running, squeaking into the top ten under two tenths behind Perez.

Despite both its drivers appearing in the top speed trap readings in practice, Williams sits dead last in 19th and 20th, with its FW41 refusing to cooperate with either driver. Oddly, despite whizzing through the speed trap at 3 kph faster than Sergey Sirotkin, Lance Stroll was the only driver to fail to break the 1:37 mark in practice Friday. A Williams spokesperson confirmed to The Drive earlier this week that development on the FW41 to fix its flaws is ongoing, but that most of the team's attention has turned to its 2019 car, the FW42.

"We are still trying to unlock some performance in the FW41, but attention turned to the FW42 as well a while back," a Williams spokesperson told The Drive.

Below is a full index of each driver's best time and margin of improvement between sessions. Development, reserve, and junior drivers are italicized.

F1: Who Will Drive for Scuderia Toro Rosso-Honda in 2019?

A talent vacuum within the Red Bull junior pipeline has the team searching far and wide for drivers to fill the seats of Toro Rosso in 2019.