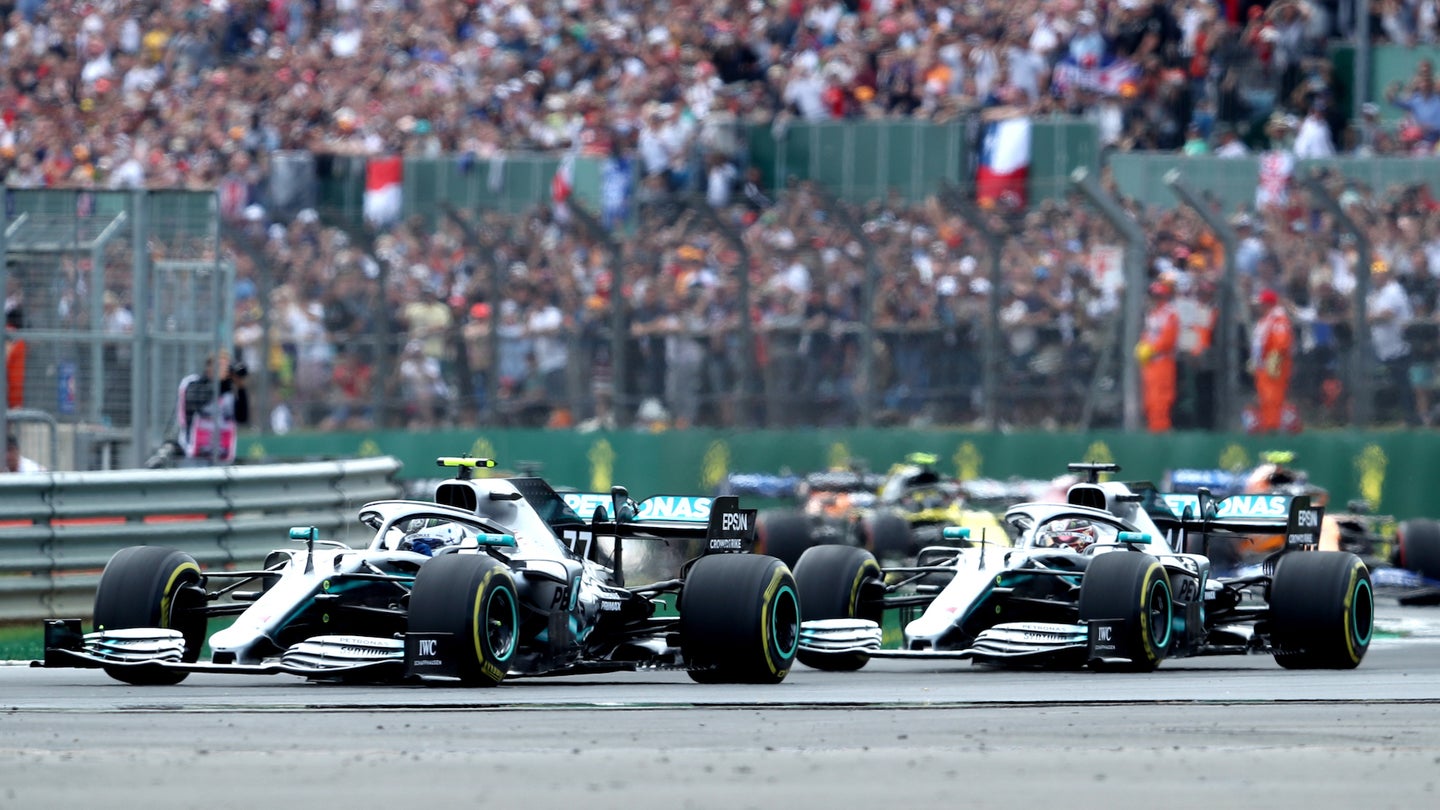 Mercedes-AMG Formula 1 driver Lewis Hamilton emerged the victor of an elbows-out British Grand Prix after an opportune safety car turned the fight for the race lead on its head.

Hamilton spent the opening laps trying to circumvent his teammate Valtteri Bottas for the lead, but the Finn is one of F1's keener defensive drivers, and barred the Brit from taking the race lead. When the Drag Reduction System (DRS) became active on lap three, Hamilton used his extra straight-line speed to make a move into the Brooklands-Luffield complex, and seemingly completed the maneuver. But Bottas bettered Hamilton's exit of Woodcote, and snapped back ahead through the inside of the fast Copse corner, keeping the battle going.

Bottas cooled the on-track situation by setting several fastest laps, opening a small gap to his teammate, who remained out of reach of the trailing Charles Leclerc of Scuderia Ferrari and Max Verstappen of Red Bull-Honda. Neither quite had the pace to challenge for the race lead outright, but both stood to benefit if the Mercedes came to blows. They didn't, though both cars from another team did: Haas' Kevin Magnussen and Romain Grosjean retired on laps eight and 10 respectively from damage sustained in a first-lap scuffle.

Leclerc and Verstappen began to fight among themselves for the bottom podium position on lap 10, with an attempted DRS pass on Hangar Straight by the latter. He failed, and found himself backed into Leclerc's teammate Sebastian Vettel, who in turn had Pierre Gasly on his six. A short DRS party turned into a successful overtake for Gasly on lap 12, when he squeezed past Vettel into Turn 3, and then maintained his newfound position with DRS... before giving it up again by becoming the first frontrunner to pit. Gasly dipped in for hard tires to undercut Ferrari, and kicked off the opening round of pit stops.

Both Leclerc and Verstappen changed to new medium tires the following lap, but a better stop let Verstappen come out a nose ahead of Leclerc in the pits. The Dutchman struggled on his cold tires, however, and went wide just after the DRS detection point. Leclerc took advantage of the Red Bull driver's mistake, and used DRS to seal the deal, reattaining his lost position. Verstappen clung to him, but couldn't hope to retake the position until his tires warmed up.

Bottas made his stop after 16 laps, taking a second set of mediums—meaning he'd have to stop again later—and rejoined the race adrift of Hamilton and Vettel. Three laps deeper into the race, Verstappen made a dive down the inside of Stowe, but Leclerc held on around the outside, somehow keeping the position again. Their scrap was frozen when Alfa Romeo's Antonio Giovinazzi beached his car on the gravel on lap 20, and race control began recovery efforts by deploying the safety car.

Hamilton and Vettel both got discount stops for tires, both switching to hard tires, but Hamilton kept his lead, while Vettel dipped to third behind Bottas. Verstappen and Leclerc also switched (in that order) to the more durable tire, rejoining fifth and sixth respectively. When the safety car called it quits at the end of lap 23, their fight for position resumed. Leclerc immediately swung around Verstappen's outside into Vale, giving him the advantage into Club, where he used the corner's slow unwind to push the Dutchman wide as payback for Verstappen's pushy pass in Austria. Nevertheless, Max's exit let him hold position, and the Ferrari driver again tucked into his mirrors.

Verstappen swapped positions with Gasly on lap 27 with the help of DRS, giving him a reprieve from the difficult Leclerc, but it wouldn't be permanent. The Monegasque driver snaked around the outside of Gasly in the slow Turn 3 on lap 36, and eager to put another car between himself and Leclerc, Verstappen commenced his attack on third-placed Vettel a lap later. He used DRS to squeak past Vettel on Hangar Straight on lap 38, and then held on around the outside of the balls-to-the-wall Stowe, but Vettel was close on his tail—probably too close.

Vettel didn't give himself enough time to duck out into clean air for braking, and when Verstappen hit the brakes, Vettel plowed into the back of him, spinning the Red Bull and bouncing it over the curbs. Both sailed into the gravel trap with minor damage but escaped the runoff area and continued to race. Verstappen rejoined fifth behind Leclerc and Gasly, and Vettel found himself 14th. After a quick pit stop on lap 38, Vettel found himself relegated to 17th, dead last, and things weren't about to get any prettier. Stewards found Vettel guilty of causing the crash and slapped him with a 10-second time penalty.

Hamilton received, then ignored an order to pit on lap 44, but Bottas, needing to use a second compound, went for soft tires after 45 laps. A healthy gap to Leclerc let Bottas maintain second place without issue, but those soft tires didn't end up permitting the Finn the fastest lap. That honor would be Hamilton's on the final, 52nd lap, when the hometown hero took the checkered flag for his sixth British Grand Prix win, matching Alain Prost's record of six home race wins. Twenty-six points in the bag, Hamilton re-extended his title lead over Bottas, now 39 points. Leclerc was voted Driver of the Day.