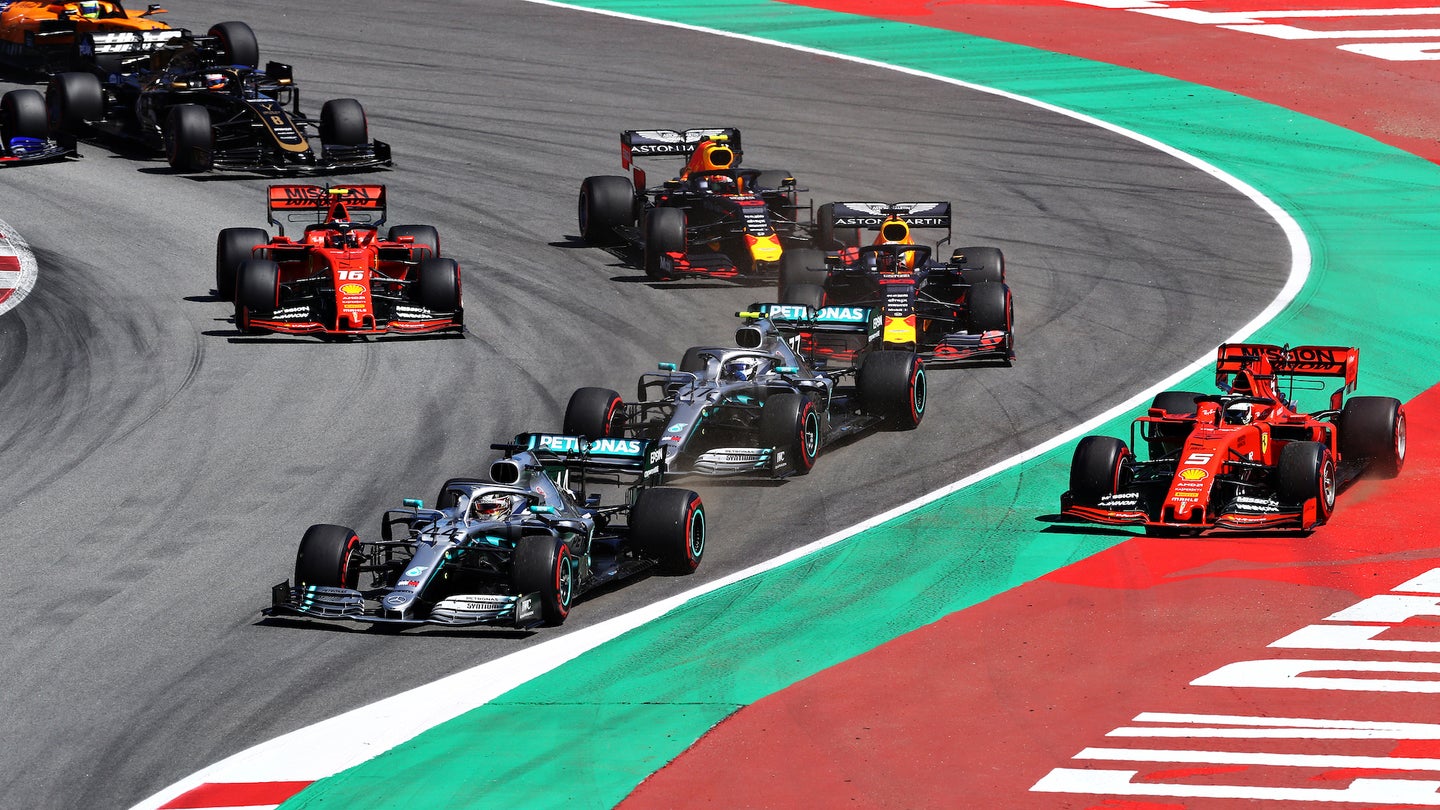 Hamilton started his journey toward the result by scrambling away from the starting line quicker than polesitter Bottas. Both Mercedes entered the first corner alongside one another, and Ferrari's Sebastian Vettel tried to get in on the action by coming around the outside. But the German locked up and ran out of road, and had to give up the fight on returning to the track, almost losing out to teammate Charles Leclerc. While this went on, Red Bull's Max Verstappen bided his time, cobbling together a turn two exit that'd launch him around the outside of Vettel and into third.

Vettel's tire developed a flat spot from his lockup and handicapped him, keeping Leclerc in DRS range. Ferrari's pit wall wanted to recover the lost position, but didn't make the call to swap positions with the quicker Leclerc until Lap 11, by which time Verstappen was several seconds up the road. Leclerc immediately built a gap to a struggling Vettel, but Leclerc struggled to make inroads on Verstappen's advantage. Throughout, Vettel begged his pit to stop him for tires, as the flat spot was ruining his race.

Ferrari obliged Vettel at last after 19 laps, making him the first frontrunner to pit and giving him a set of medium tires. With grip at last, Vettel's pace immediately picked up and it wouldn't be long before he set the fastest lap. Verstappen followed Vettel's example after 20 laps, instead opting for soft tires and rejoining fifth. Gasly went to new medium tires after 22 laps, but Leclerc made an unprecedented change to hard tires after 25 laps, emerging P5, just feet up the road of Vettel. Mercedes at last moved for new tires, dropping Bottas into a set of medium tires after 26 laps, and Hamilton, the same after 27.

The Scuderia again faced the problem of its trailing driver being faster than its leader, and once again was slow to address the issue. Leclerc wasn't told to make way for Vettel until Lap 36, by which time Vettel's tires were already nearing expiration. They stopped him again for new medium tires after Lap 40, Vettel returning to the racetrack P6 behind Pierre Gasly, whose position he retook by the end of the lap. Verstappen stopped again after 44 laps, this time for medium tires, and rejoined between Leclerc and Vettel.

As Mercedes started its second round of pit stops, Bottas picking up soft tires for the end of the race, Racing Point's Lance Stroll and McLaren's Lando Norris collided going through Turn 1, both cars taking race-ending damage. A safety car emerged, and Mercedes' planned pit stop for Hamilton—for soft tires—lost the Brit no time. Under the safety car, Ferrari opportunistically stopped Leclerc for medium tires, hoping to accelerate the young Monegasque driver's car in the closing stages of the race, after the safety car restart.

And restart the race did, after a lengthy safety car period, the Mercedes-AMG GT bowing out on lap 52. Despite close proximity between the race's frontrunners, there was no significant change of position between them, minus Gasly's brief scrap with Haas' Kevin Magnussen.

Hamilton chalked up the fastest lap as his fuel dwindled and was the first driver to cross the finish line, ahead of Bottas and Verstappen. He and the Finn gave Mercedes a fifth consecutive one-two finish this season, though it was Verstappen whose performance drew the awe of F1's audience, the Dutchman winning the Driver of the Day vote.

Hamilton leads the championship by seven points over Bottas, 112 to 105 points respectively.