The Beast of the Green Hell slaps a smile on its driver's face like few other cars can.

Every car out there has a factor that limits its performance. Some, like a Mazda Miata or Subaru BRZ, are engine-limited: the chassis is willing but the powerplant doesn't pack the strength to set it free. A car like the Dodge Charger Hellcat, on the other hand, has the opposite problem, with the engine far more capable than the chassis and tires.

The new Mercedes-AMG GT R, on the other hand, is only driver-limited; the one thing that would hold this car back would be you.

This super sports car will always be more capable than you, especially when you are constrained by the posted speed limits on public roads, but potentially it is only restricted by how brave you want to be. Tuned for the Nürburgring, it's capable of handling the bumps and lumps of public asphalt better than your average track-ready supercar that's been set up for the super-smooth likes of Spa-Francorchamps or Circuit of the Americas.

As such, to drive it on public roads requires commitment to potentially license-losing speeds, so it's best left to quiet places on the edges of the map. The "Beast of the Green Hell" nom du guerre is appropriate in more ways than one: its potential is best tapped deep in the countryside, away from all the trappings of civilization. The distractions are fewer there; more importantly, there's less traffic that could put the kibosh on a high-speed blast down a back road. This is the sort of car made to walk that line where road and track collide; places like the 'Ring, like Pikes Peak, like the many closed-course open road rallies that dot America.

But once you give yourself permission to explore the GT R's capabilities, to push it past the edge of apprehension, this AMG proves capable of painting a smile across your face like few other cars can. 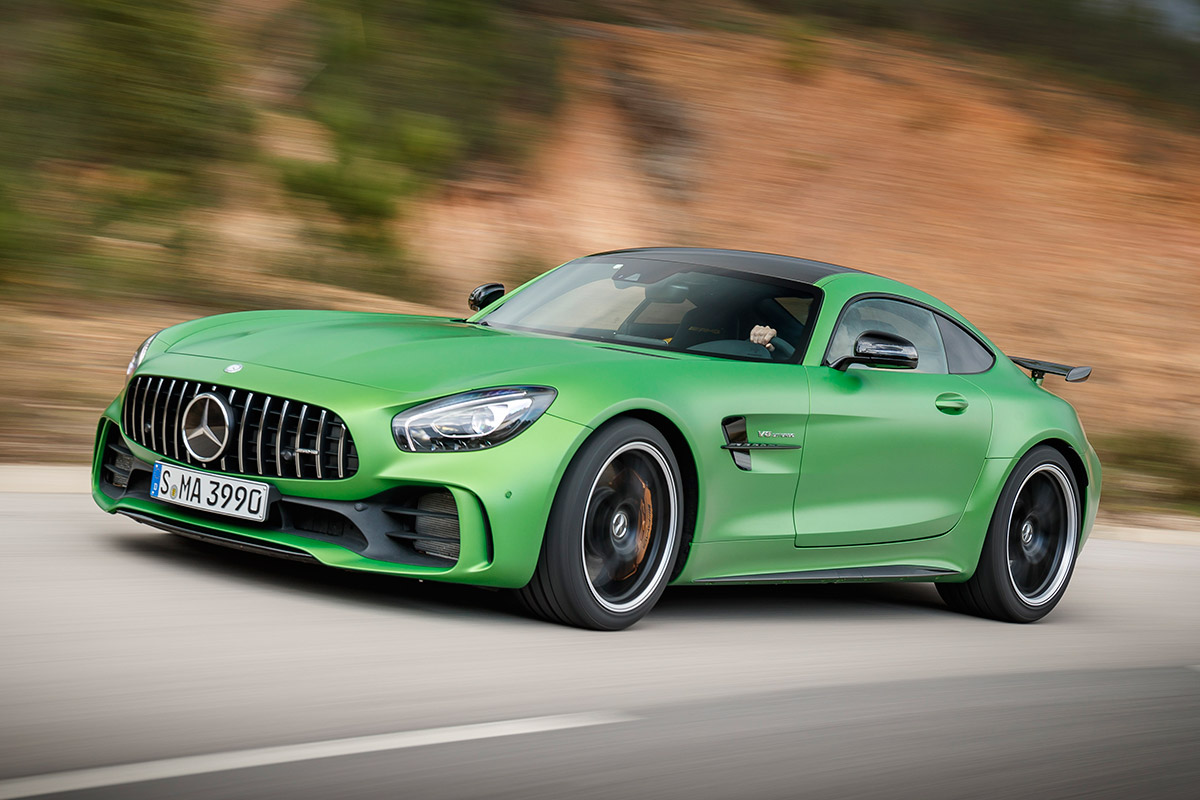 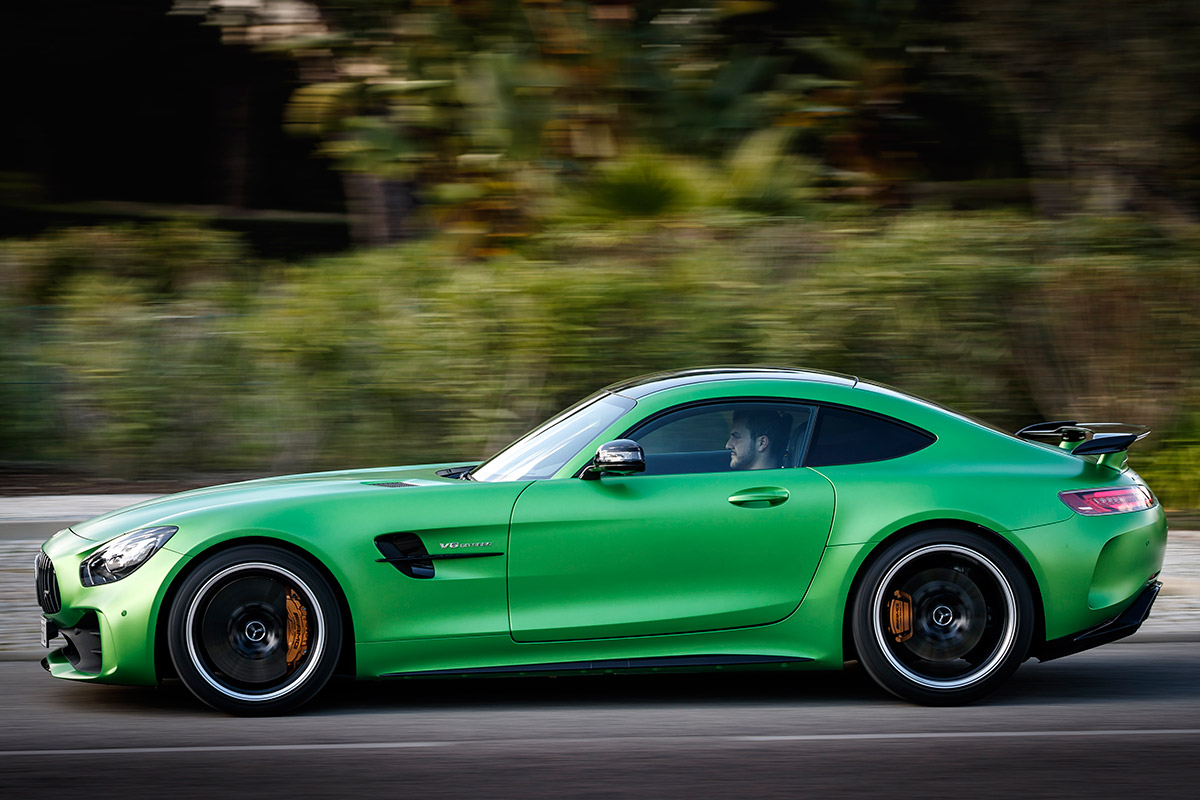 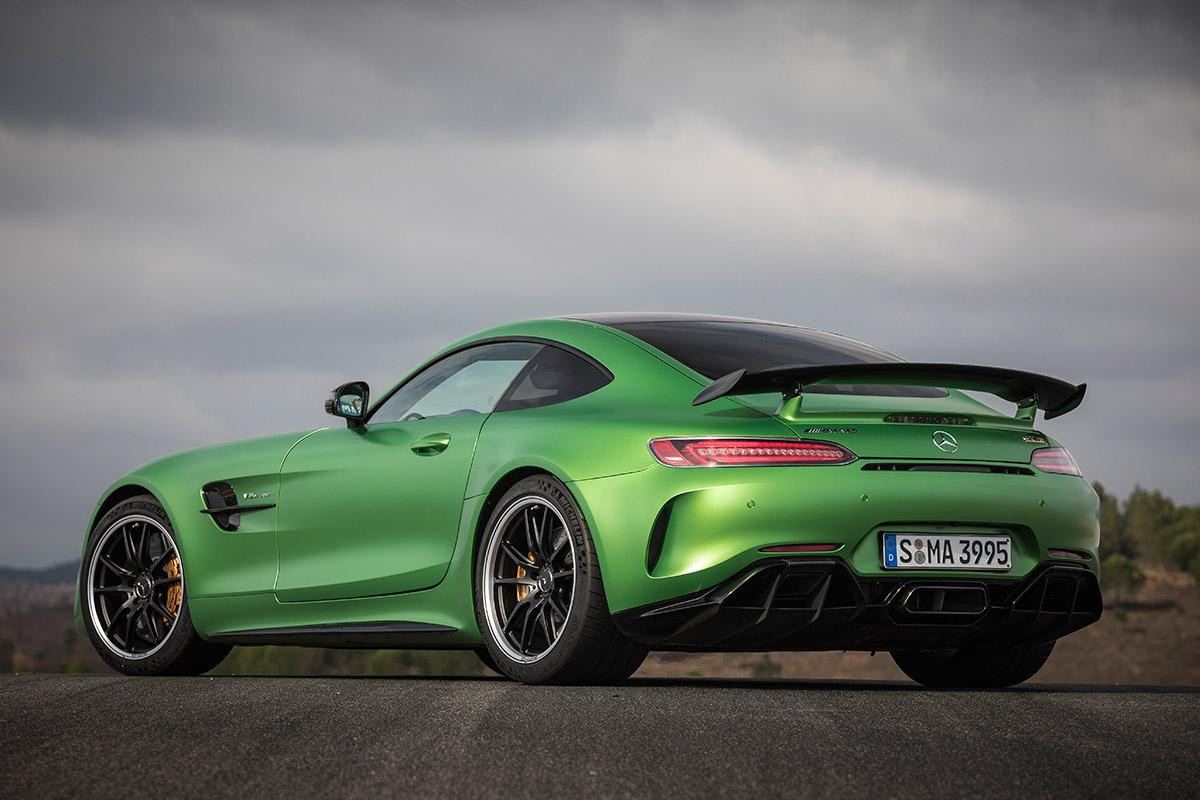 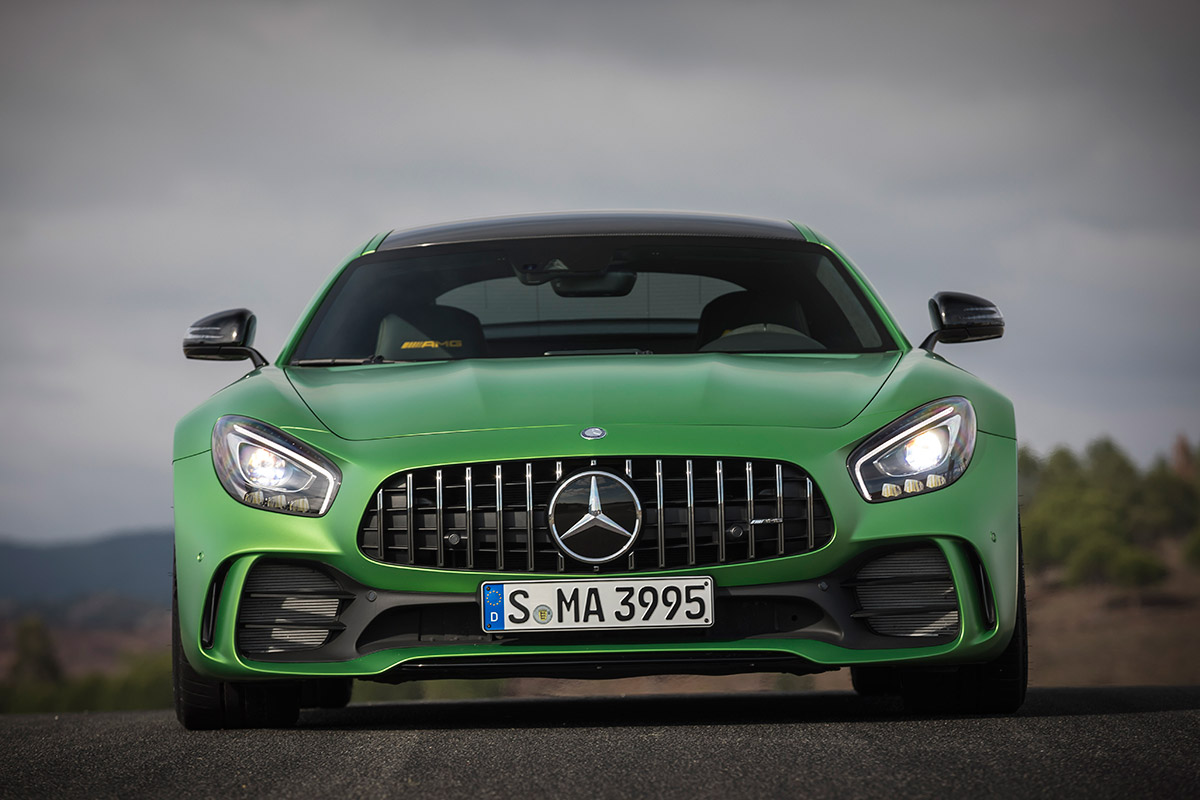 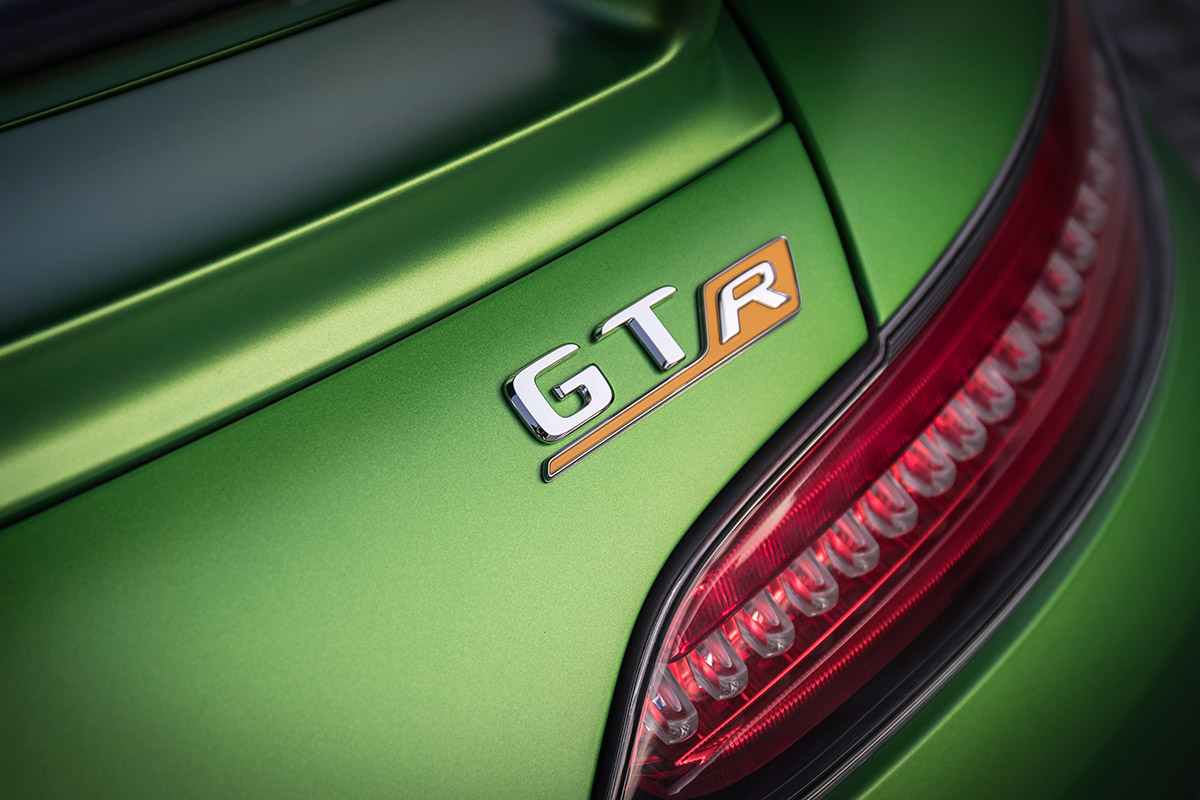 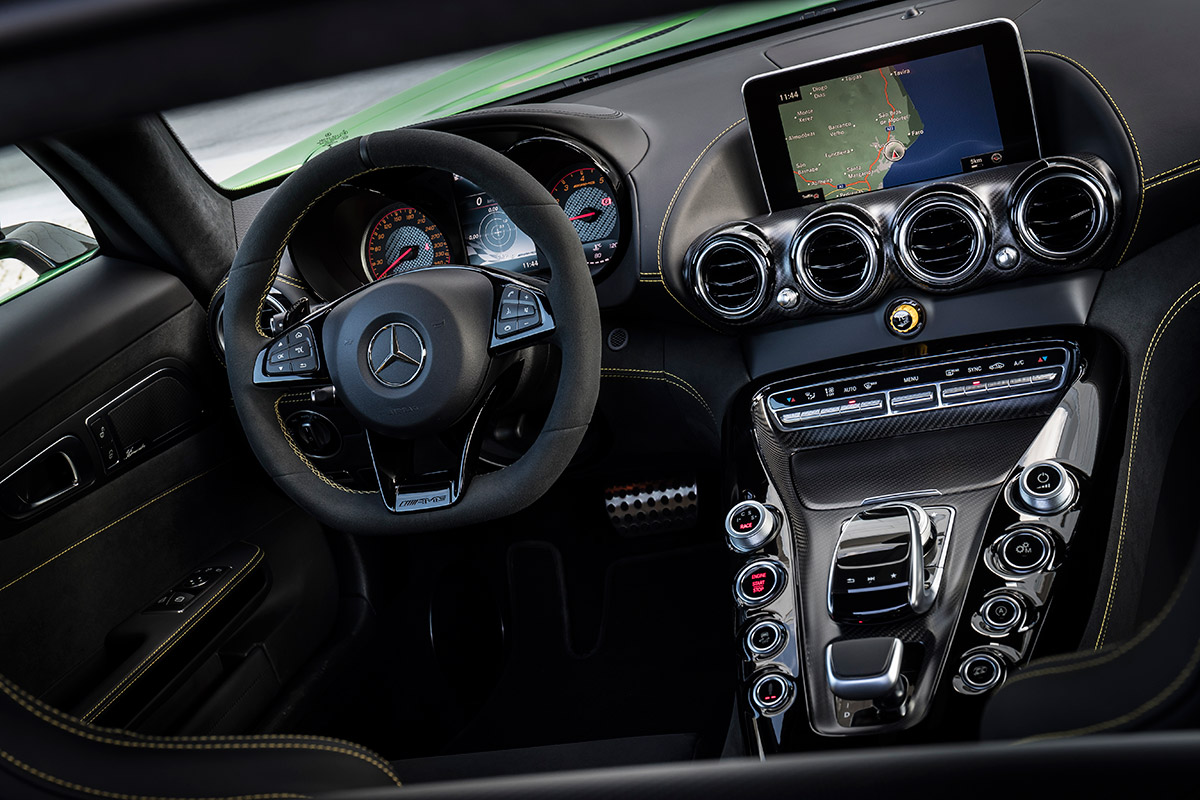 The suspension excels at laying the GT R out flat and true through every sort of curve the world throws at it; rear-wheel steering and massive, grippy tires—10 inches wide up front and a foot wide in back, both an inch broader than the GT S—build on that further, giving this car the sort of physics-bending ability usually only ever encountered in honest-to-God supercars like the Ferrari 488. But in spite of that capability, it's no spine-shattering carnival ride on rough pavement. Even in its firmest setting, the dampers don't punish the way you'd expect from a car as capable as this AMG.

Of course, the GT R's handling may help it stand out from less sports cars, but no AMG would be an AMG without a stellar engine. The 4.0-liter hot-vee twin-turbo eight-pot tucked way back beneath that John Holmes hood may be rather ubiquitous by now, especially compared with mills like the Porsche 911 GT3's howling four-liter flat six and the Lamborghini Huracan's triumph of a V-10, but it's no less spectacular for its commonality. With 577 horsepower and 516 pound-feet just an ankle-flex away, this 3,500-pound AMG rips apart roads the way a Siberian tiger takes down a limping deer. But the engine's tractability belies its ferocity. Drop it into sixth gear when dawdling along and floor the throttle, and it builds power like a dynamo, accelerating from 40 miles per hour to 100 and beyond in one smooth rush that will leave most cars sucking its wake.

Doing so, however, would deny those would-be tailgaters—and yourself—the snarling, NASCAR-stocker-on-meth sound of the sports exhaust at full blast. Roaring up through the power band, the tailpipes—two on the sides and one in the center of that diffuser-riddled tail end—rise in volume and pitch with volcanic urgency; let off the gas, and the backfires crackle like pine in a campfire. AMGs have always ranked among the rock stars of the car world, but the GT R channels Chris Cornell: even in a crowd of mellifluous voices, its range and power stand out. 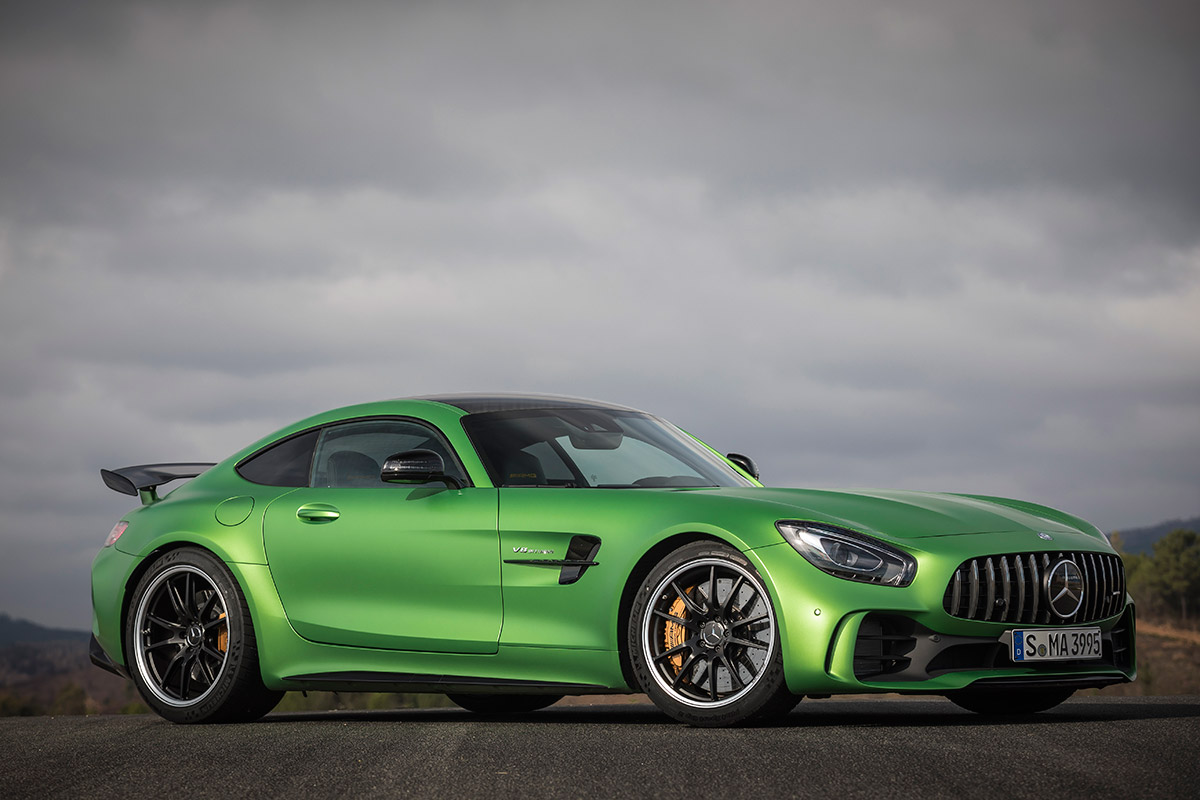 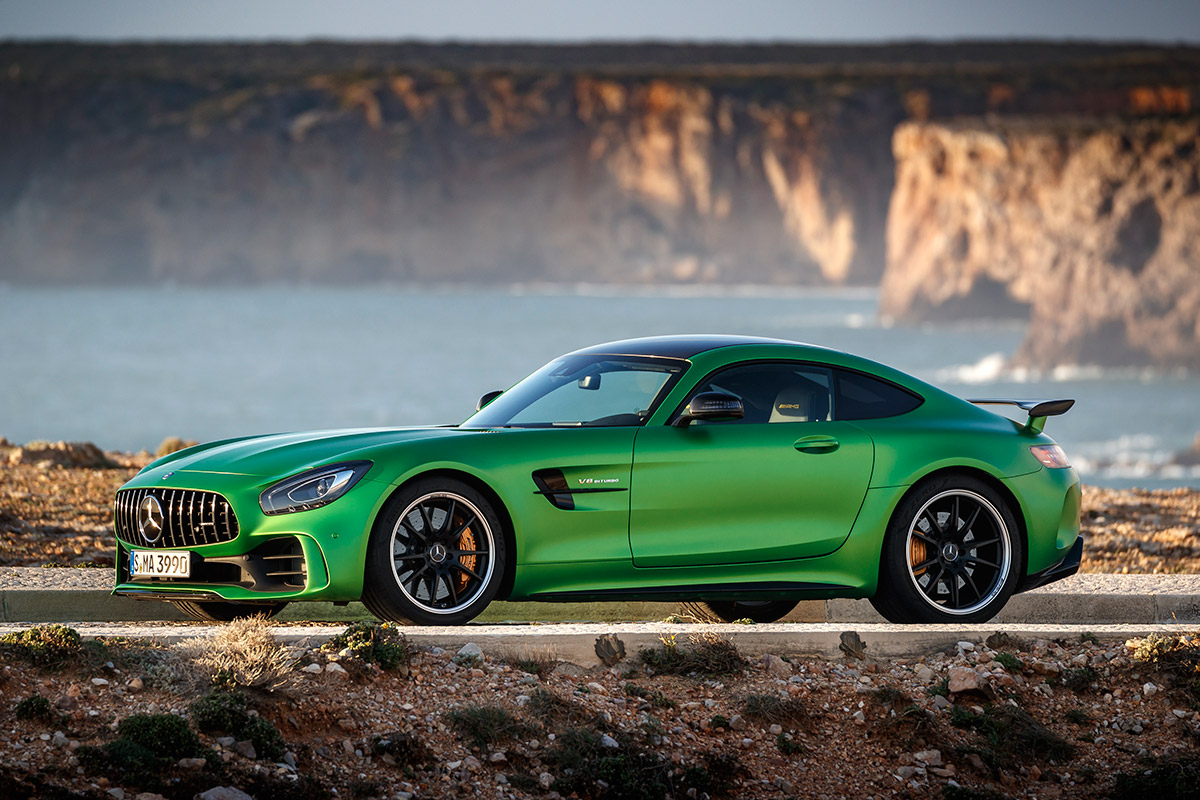 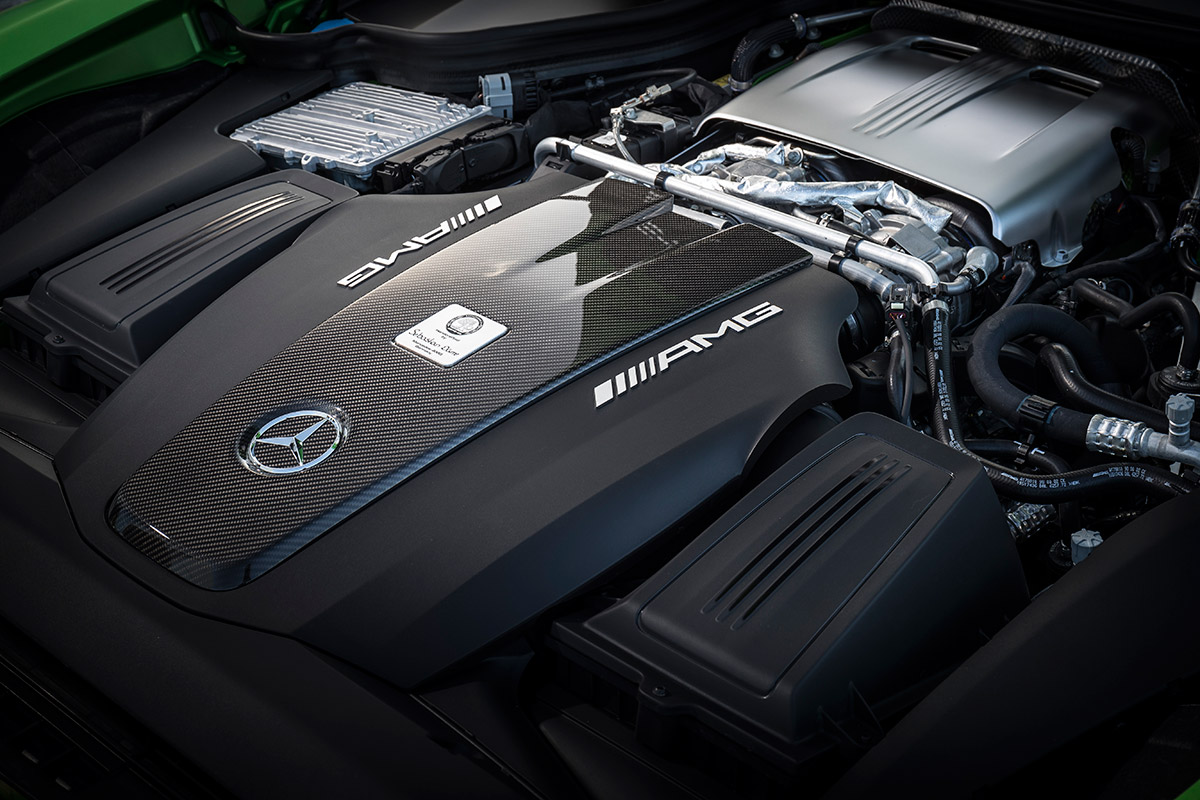 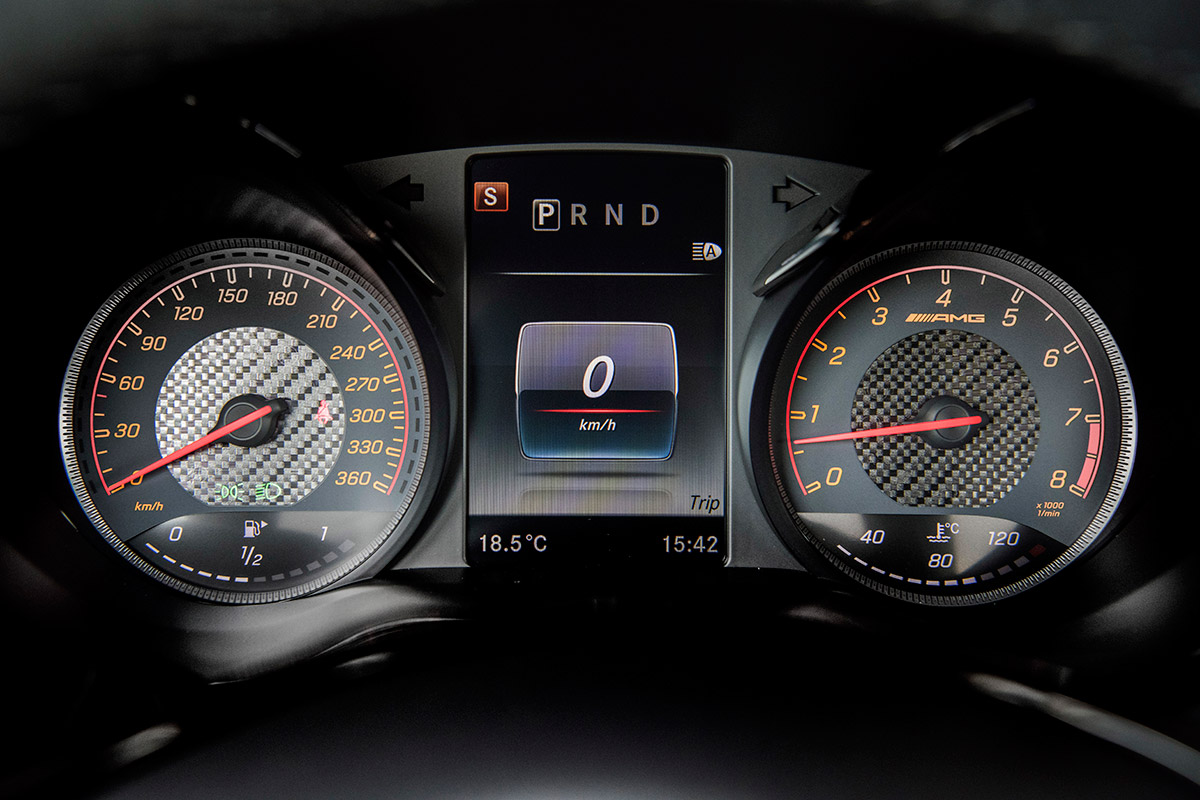 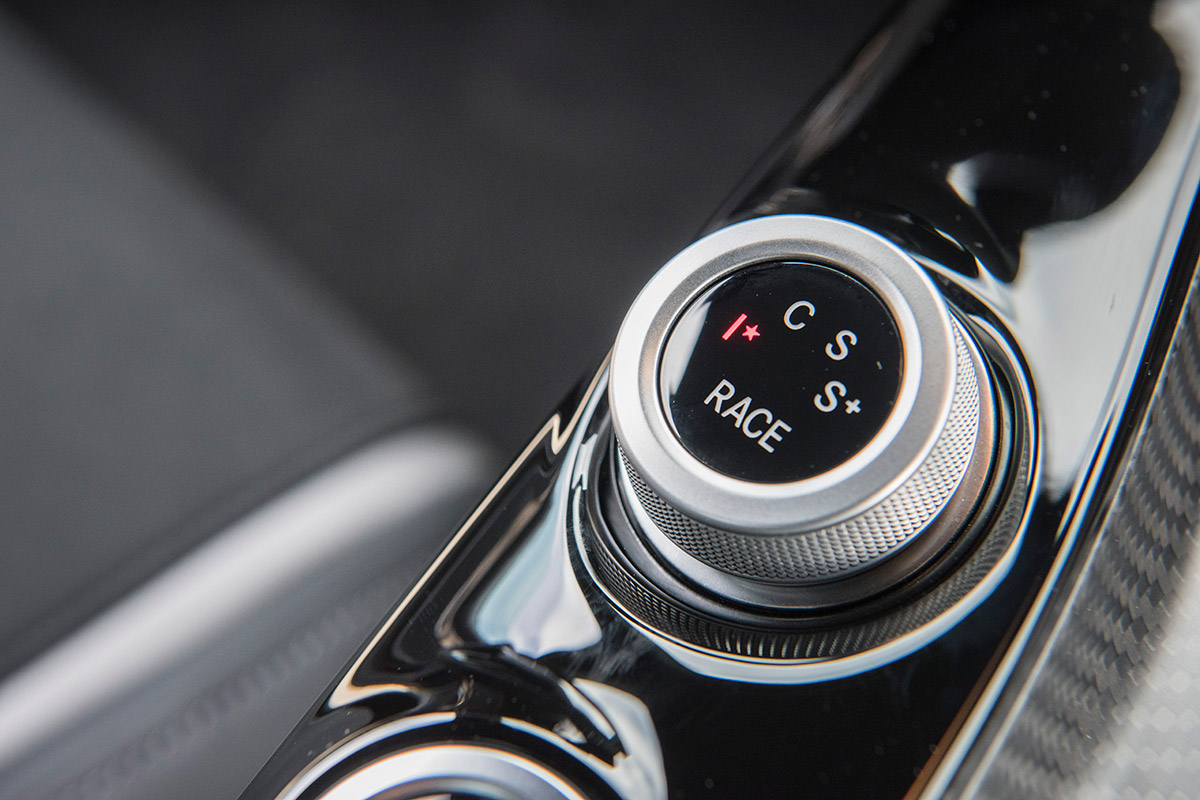 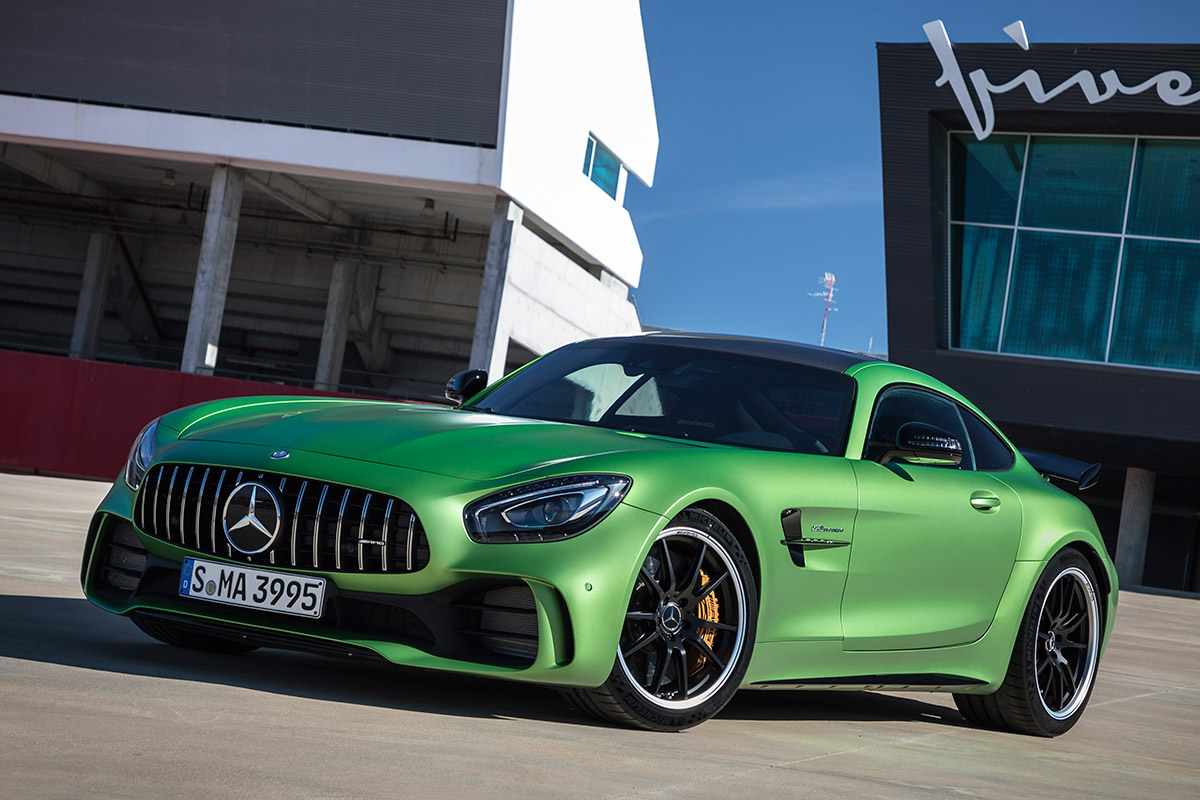 AMG's new range-topper may be awe-inspiring behind the wheel, but it's also plenty capable of inspiring lustful thoughts when standing still. The aerodynamic amendments made to the basic, already-alluring AMG GT design for track-focused duty add visual charisma, especially when you check the boxes to have items like the rear wing rendered in carbon fiber.

The GT R startles you with its size in person; the wider fenders and track that come when you choose it or the GT C model add to that impression. For The Drive's media day with the car, Mercedes-Benz USA had us muster at the carmaker's giant Manhattan showroom—where, as it turned out, the dealership employees had parked an SLR McLaren that was in for service next to the five GT Rs assembled for the New York-area media to drive. Remarkably, the SLR—which seemed gargantuan back when it faced off against the likes of the Porsche Carrera GT and the Ferrari Enzo in the early Aughts—seemed almost small in comparison, its busier lines distracting from its size in a way the GT R's cleaner styling doesn't.

Clamber inside the Beast of the Green Hell, and you'll find the same interior as the rest of the growing AMG GT lineup, differentiated by a handful of tiny alterations. The yellow traction control knob, which swaps the car through nine different levels of allowable wheel slip, is the most obvious, sitting like an awkward zit in the middle of the dashboard. (It might look better contrasted against a lighter interior ... but, wait, Mercedes only offers the GT R with black guts.) Otherwise, it's the same limited aft visibility, tall belt line, hillock-sized center console, and low-slung seating position that combine to leave you and your passenger feeling like the bathtub couple in the Cialis commercials.

Nevertheless, once you settle into the charcoal-black cockpit, the GT R proves itself a comfortable enough place to cover the miles. You'll never confuse the AMG Performance seats for the thrones in an S-Class, but their bolstering and padding walk the fine line between long-distance comfort and cornering support. Unlike many Nürburgring track-rat production cars, the GT R doesn't offer a stripped-down bucket seat option—and it doesn't need one.

But surprisingly for a Mercedes that starts at $157,000, the AMG GT R comes with a lengthy list of options that can tack on a lesser Benz's full MSRP onto the cost of this super sports car. (Methinks Mercedes may have stolen more than performance targets from Porsche.) That sexy verderous paint on my test car called AMG Green Hell Magno (also seen in Mercedes-Benz's official shots peppered throughout this story) may seem like a must-have option, but you may think otherwise when you see the $9,900 price tag. Carbon-ceramic brakes cost an extra $8,950. There are not one but two separate Burmeister stereo options, costing $1,300 or $4,500; as my tester came with neither, I can honestly swear your money would be better spent elsewhere. Active cruise control costs $2,250, and red, yellow, or silver seat belts in lieu of the standard black run $500. Hell, it's possible to add on more than $15,000 just in carbon fiber options.

You don't need any of that. The Mercedes-AMG GT R is more or less perfect straight out of the box. At less than $160,000, it's practically a bargain. It's a car capable of standing toe-to-toe with some of the greatest sports cars in production today, and does the lengthy performance legacy of its parent proud.

The only real strike against this German monster: The name. Because no matter how awesome, how capable, how spectacular this AMG might be, it's never going to be the first car we think of when we say "GT R."