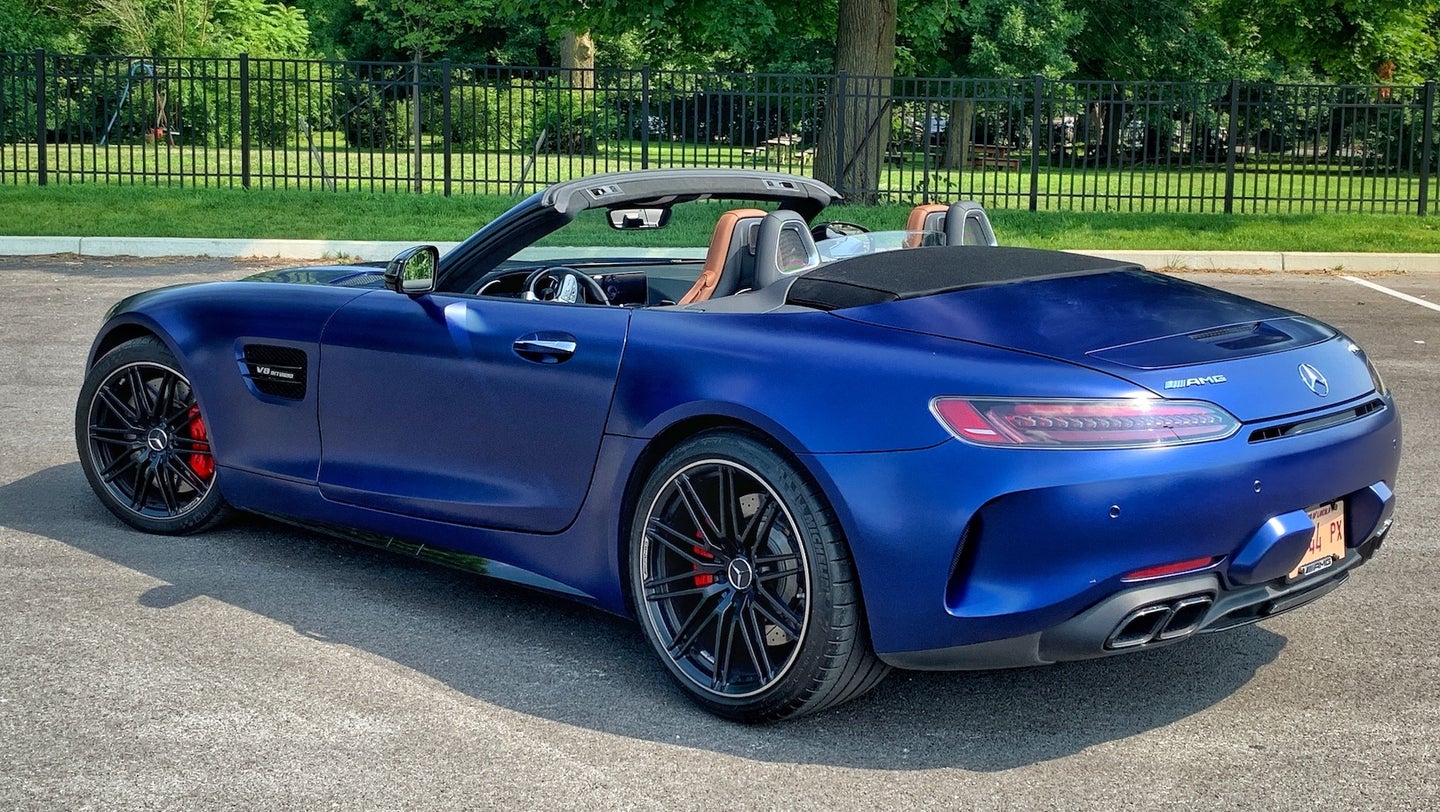 Shortly after you’re born, your very first exposure to the outside world happens from inside a car. (As a dad, I can tell you that it’s also the most nerve-wracking drive of your life.) As a teenager, life revs up when you get your driver’s license. After that, it’s time for long-term partnership, maybe even a limo or a jalopy with “JUST MARRIED” scribbled on the windows.

From that moment on, the cycle repeats itself until one day you’re in the back of a hearse. Trajectories may vary, but cars are always there, serving as rolling shelters for life's good and bad times.

I recently found myself behind the wheel of a special car during a special time. That car was 2020 Mercedes-AMG GT C Roadster and that moment was my wife's major, cancer-preventive surgery. The days before and after it were challenging and painful, stressful and never-ending, which meant that I was left with little time to enjoy such beast.

In the midst of the madness, however, I was reminded that a car is much more than a box on wheels, but a soulful machine that—albeit briefly—can make us forget about even our biggest sorrows.

The 2020 Mercedes-AMG GT C Roadster, By the Numbers

The Mercedes-AMG GT C is almost the crown jewel of the brand’s sports car lineup—only the amped-up GT R trumps it in terms of performance and price. The GT replaced the gullwing-door SLS, and also served as the official safety car in the Formula One World Championship until the more hardcore GT R came along.

The GT C Roadster looks like the quintessential convertible sports car, boasting a long and chiseled hood that culminates in a short but wide rear end. At the very front, the Panamericana grille looks menacing, just like it did in the heroic roadsters that contested in the famous Mexican race in the '50s.

Further up, the two-seater cabin is surprisingly roomy, with every bit of its dimensions paying homage to the OG Benz sports car: the iconic SL 300. Even the side gills ooze Mercedes’ rich heritage, though these are sadly disgraced with bulky V8 Biturbo badges.

Under the long hood—and it truly feels never-ending from behind the wheel—is a handcrafted, 4.0-liter twin-turbo V8 that cranks out 550 horsepower and 502 pound-feet of torque. The 3,660-pound roadster can do zero to 60 in just 3.6 seconds courtesy of quick-shifting, dual-clutch seven-speed transmission, and continue all the way up to 196 mph.

Unlike most of its rivals that employ clever all-wheel-drive systems, like the Acura NSX or Audi R8, the GT puts the power down the old-fashioned way to the rear wheels only, making that zero-to-60 time even more impressive. To put it in simple terms, this sucker throws you back when you punch it. No ifs, ands or buts.

My test car came in a sleek "Designo Brilliant Blue Magno," which is AMG-speak for matte royal blue. If the $179,795 price tag didn’t remind me of my place in society, the fact that the matte finish can only be hand-washed with special car-care products surely did. Running the matte finish through a carwash would make the car look like it drove through miles and miles of thorny branches.

All of the above would normally have me giddy about hopping in the driver’s seat, but my mind and emotions were focused on something else. Finally, a full day after being handed the keys, I had the chance to really get some seat time on the thing, and even better, bring my wife along.

Though not for long, the two of us were able to escape reality ahead of her surgery, and head north of Indianapolis to enjoy the sunset on a hot and muggy summer day. At nearly 100 degrees and still sunny, I was first reluctant to fold the top down and burn my face and forearms, but that’s exactly what she made me do. My wife's the kind of person who is always cold and even turns on the seat warmers when it’s 80 degrees out. Her wanting to bake in the summer sun while relaxing on the brown Nappa leather seats didn’t exactly come as a surprise.

Going from roof- to roof-less is a simple affair, with the cloth top retracting up or down in little over 12 seconds at speeds of up to 38 mph. This makes stop-light roof swaps easy-breezy, and the mechanism is so quiet that you'll have to pay attention to the chime that lets you know when the transformation is complete.

A brief stint on the interstate eventually took us out of the city and onto more interesting roads, though keep in mind that this is central Indiana after all, so "interesting" is a bit of an exaggeration. The GT C offers Comfort, Sport, Sport+, Race, and Individual driving modes, but I didn't need to explore anything north of Sport. A plethora of buttons surrounding the awkwardly-located shifter allowed me to fine-tune aspects like the exhaust loudness, suspension stiffness, as well as transmission and engine performance.

Although I had Sport mode engaged most of the time, I was able to dial the suspension and transmission back down to Comfort for a smoother ride, but I kept the exhaust on loud. With a soundtrack like this, you'd be crazy not to.

The GT's suspension was soft and controlled even under the worst of surfaces, and the steering extremely precise, helping me, the driver, release some stress with every turn of the wheel and input of the throttle.

With the slightest effort, the GT would point its long nose wherever directed, gently gliding through corners and speeding down straights, where you could actually feel the rear squat and the Michelin Pilot Super Sport tires hook up before slinging you forward. It was therapeutic. I didn't need to do 100+ mph to enjoy the GT, though I wanted to (and so did the car), as the powerful German felt alive and happy at half that speed.

The dual-clutch transmission plays a huge role in propelling the GT with smoothness and urgency, though even in Sport mode the ratios felt quite long. Off the line, you didn't have to explore past third gear to be doing illegal speeds, and when driving spiritedly I felt like I was better off leaving the shifting to the car rather than using the paddles, mainly due to the computer's desire to always cruise in a higher gear. Perhaps in Sport+ and Race modes it's a different story.

The level of wind noise was acceptable with the top down regardless if the windows were up or down, though the air conditioning left a lot to be desired in terms of noise and performance. Also, it's beyond me why Mercedes' "Airscarf" system, which is basically a vent embedded into the back of your seat that blows air on your neck, can only produce hot air and not cold.

For my wife, as the passenger, the ride was balanced, serene, and relatively uneventful—but in a good way. A handful of times she stopped smiling to say something, usually when I'd push the digital needle close to the 7,000 rpm redline in second gear, but I can't say I remember what she said—or maybe I didn't want to know? Just kidding. Every few corners I'd glance at the mirror and catch a glimpse of her face, which looked like something out of a cheesy TV commercial with the sun's rays making all kinds of funky light patterns. She looked happy, she looked at peace—whether this was because I'm a good driver or because Mercedes makes safe cars—I've yet to ask.

Eventually, we agreed that we had enough of the wind and decided to put the roof back on. The cabin quickly morphed into a quiet and much cooler cocoon, while the Burmester sound system blew us away with its crisp notes and deep booms. With the top down, the $4,500 optional stereo is about as good as it gets in a convertible without dropping $350,000 on a Rolls-Royce, but with the top up it was even better. In case you're wondering, we jammed out to a variety of Alicia Keys and Jay-Z's greatest hits.

The 150-mile route was coming to an end when the feeling hit us. We remembered what it was like being teenagers, when going for a drive—any drive, in any car—was equally relaxing and thrilling. We remembered that sometimes the best therapy is the open road and the best stress-reliever a car.

Under different circumstances, we would've gone out to dinner, a movie, or something that didn't involve much driving, but due to the virus situation, we had strict rules to self-isolate. What better way to isolate than in a two-seater car on a country road?

It turns out, we can actually say that going for a nice drive was exactly what the doctor ordered—and we were just super lucky to do it in Mercedes-AMG's finest.

Also, the surgery was a success.