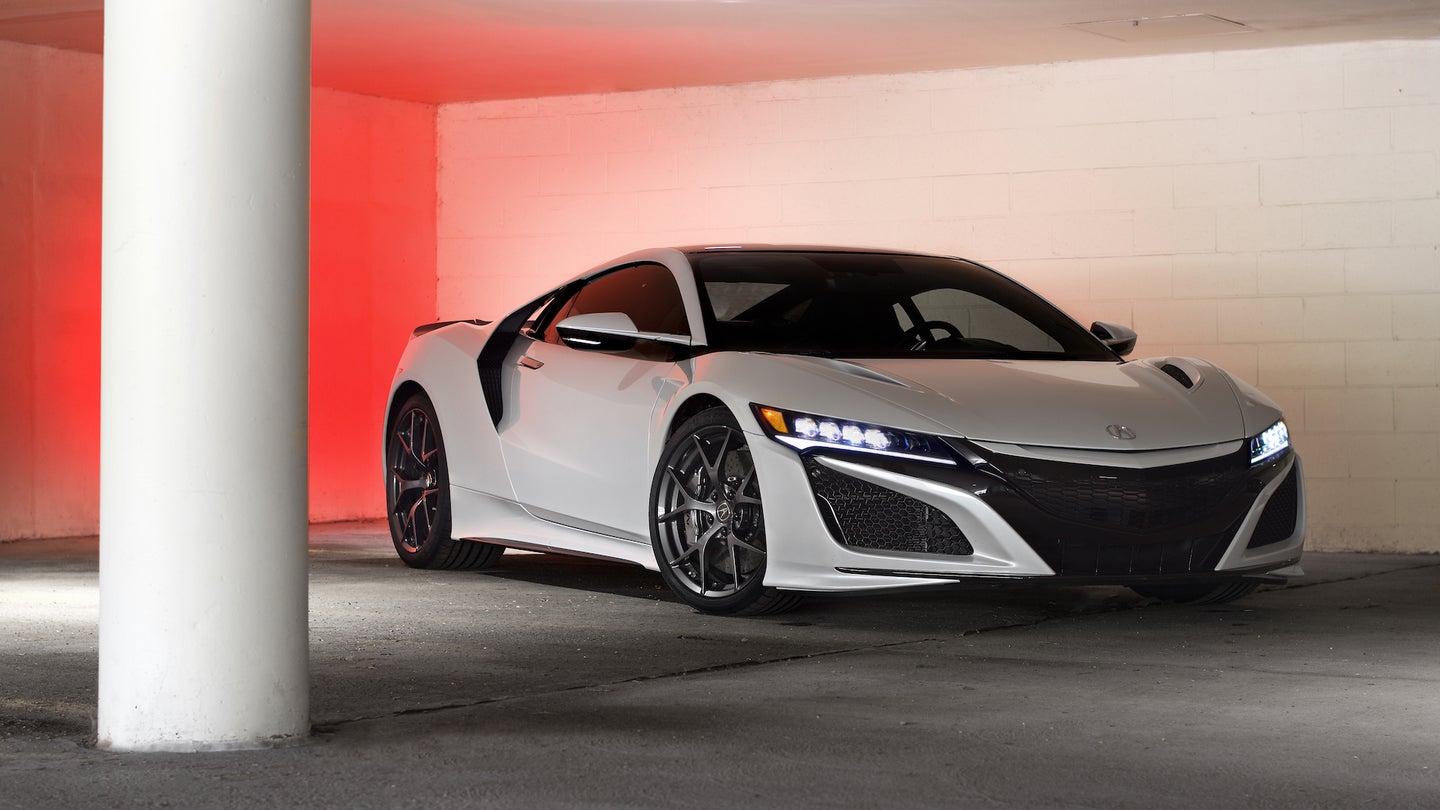 Let's be real—supercars can be a pain to drive outside the magical realm of race tracks, canyon roads, and the adoring grounds of your local Cars & Coffee. Ingress, egress, and overall visibility generally suck in these low slung machines. Then there’s the harrowing experience of occasionally leaving them parked on the street, waiting for some dumb kid to do it for the ‘Gram and hop on the hood for a photo.

But in the words of the late, great Billy Mays, “But wait, there’s more!” There’s a solution to supercar anxiety, and it’s the 2019 Acura NSX, a supercar so friendly and so...Acura that it tends to get attention only from those who are predisposed to appreciate it. After a 900-mile road trip in one, we can honestly say that while it prompts a few more double takes than a Honda Civic, a surprising number of people won’t even turn their heads.

It's not that the NSX doesn't look good or it doesn't make the right sounds. Its mid-engine profile certainly has more of a “Hey, I’m a supercar!” vibe than something like a Porsche 911, Nissan GT-R, or the Corvette ZR1. But there’s something about that Acura badge on the hood that works as a societal mask like Clark Kent’s glasses. It’s a surprisingly effective disguise, and unless you’re a champagne-swilling playboy, that’s actually a good thing when you’re trying to make tracks. You want to fly under the radar in a grand tourer—and the NSX is more than happy to oblige.

A nearly-$200,000 supercar should prompt attention when it’s street-parked in my Indianapolis neighborhood, yet it was only my 12-year-old son who rushed outside to drool over the pearly, wedge-shaped slab. The car would face a true usability test over the next few days, ferrying the two of us and our gear up to Michigan for the Belle Isle Grand Prix, some eponymous grand touring of America’s mitten, and a blast back down to Indiana.

Of course, the route between these two midwestern capitals is utterly boring, and a 5:00am start time the next day allowed us to make short work of the rural highways. Three things immediately stood out in the NSX: One, the “Jewel Eye” LED headlamps are amazingly crisp. Two, that turbo’d 573-horsepower hybrid V6 delivers an impressive 24+ mpg on the highway despite an EPA rating of just 22. And three, the car’s magnetorheological dampers are so compliant in their softest mode that even the crater-ridden stretch of I-75 from Toledo to Detroit hardly shook our spines. For context, traversing that same stretch in a Ford Focus RS was pure torture.

But it wasn’t until we reached the Motor City that the spotlight shone on the NSX’s complete-package nature. Its 3.7 inches of ground clearance aced the city's parking ramps and speed bumps; steering is lighter at low speeds for easy parallel parking. The only demerit: there's no getting around the car's hilarious 47.8-inch overall height, which makes things a bit complicated at the Starbucks drive-thru. Which, don’t even bother, because it doesn’t come with built-in cupholders. (A cheap plastic attachment that clips to the passenger side of the center console is available, but again, the NSX should probably be a no-drinks car.)

A late afternoon rainstorm—the kind where wipers can’t keep up on the highest setting—provided further proof that this all-weather supercar can handle truly adverse conditions. The 19-inch front and 20-inch rear Continental SportContact tires, aided by Acura's Super Handling All-Wheel Drive, never skipped a beat despite the constant presence of standing water. All that daily usability is bolstered by the Integrated Dynamics System, which is Acura parlance for programmable driving modes—Quiet, Sport, Sport +, and Track.

Like any system, it dials in the all-wheel-drive system, traction control systems, suspension, and throttle mapping for the situation at hand. But it’s further augmented by having those instant-torque twin electric motors up front, which also work to vector torque in the corners—you can really feel the throttle response and turn-in sharpness increase the further up you go. Quiet and Sport modes are the best-suited for road trip duty, while we’ve seen what Track mode can do at both Daytona and Road America with all the nannies turned off. And despite the fact that it's the least exciting of the modes, Quiet operation is the key to experiencing the NSX's electric-only side—it'll do up to 50 mph on battery power alone, though you have to take care to avoid accidentally waking up the engine with too much throttle.

As we bounced around central Michigan for three days, the NSX never once felt uncomfortable or ill-suited for vacation duty, that optional carbon fiber front splitter remaining remarkably intact over some dicey roads. Following a multi-hour blast back down to Indianapolis, the NSX morphed from grand tourer to daily driver and became the family steed for running errands, taking children to summer jobs and summer camps, and generally puttering around town—You know, the kind of tasks that require any car (let alone a supercar) to actually work. This meant a great backup camera, untroubled Bluetooth and Apple CarPlay, rock-solid air conditioning, a smooth idle and supple ride, and stress-free ground clearance. “Easy,” you might think, but good luck checking all those boxes in your Italian stallion.

For any car, a road trip and all its phases, conditions, and diverse challenges can be a true gauntlet. You see a car in its entirety—the highs and lows that can only be found with hours and hours behind the wheel in a single go. The NSX is commonly praised as a daily-driveable supercar, but we’ll go one step further and say that this is the supercar you want to travel in. Even though you’ll never see the words “grand tourer” in the marketing materials, it more than delivers.