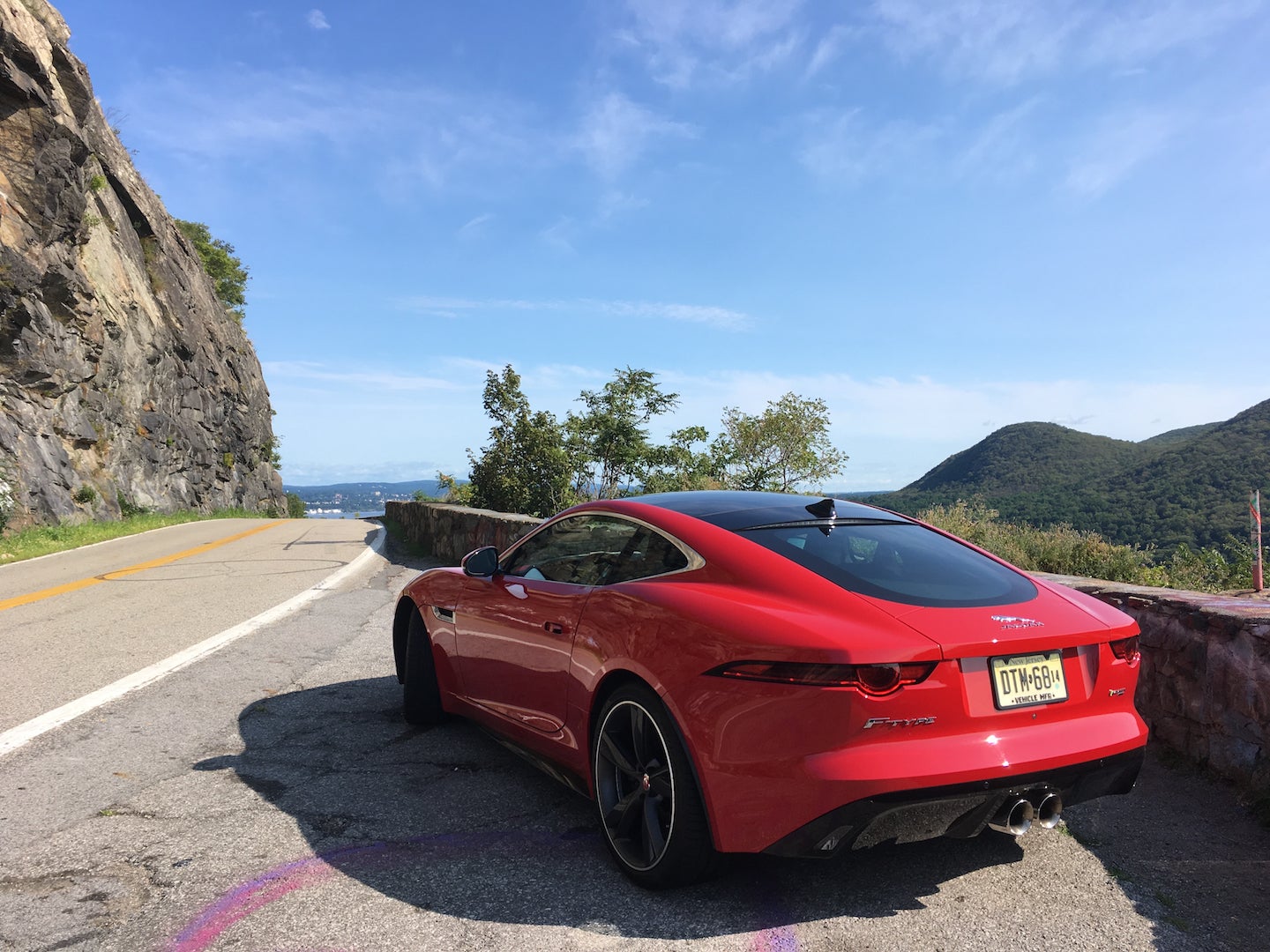 The Jaguar F-TYPE disturbs a gang of crows. Black, feathered forms alight from the asphalt, passing in and out of shadow with a bitter chorus of caws. The Jag idles beneath the tree canopy, its 380-horsepower V6 sending a low burble through the unseasonably cool morning air. Beyond the coupe’s chin splitter unfurls one of the most mouth-drying stretches of road in the United States. We’re 45 miles from one of the most populous cities in the world—and there's nobody here.

Storm King Highway, a 3.5-mile section of New York State Route 218, derives its name from the 1,339-foot mountain to which it clings—a granite massif that rises abruptly from the Hudson River’s western bank. At the road’s highest point, unimpeded views extend in three cardinal directions; at its lowest, trees and underbrush threaten to induce tunnel vision. Prone to glacier-like sloughing, the mountain drops the occasional 800-pound crumb on the roadway below, prompting closures that can last for weeks. Gorgeous though the landscape is, drivers and riders forever flirt with a fatal, 420-foot detour down to the riverbank. This road is the real deal.

Secrets don’t stay secret for long in New York. That’s why your go-to spot for Szechuan noodles will be overrun by the Instagramming hordes next week, and why property value will skyrocket in your neighborhood even as everyone heralds it as "undiscovered." But in a metro area of 20 million people, escape prompts envy like nothing else—because it is an astonishing trick to pull off. And that might be why Storm King Highway remains so beloved by those who know it.

We all hold notions of what makes a great driving road: twists, elevation changes, views, minimal traffic. But nothing compounds that greatness like having to put in work to get to one. If you're a contributing member of society, the people in your orbit likely don’t abide joyride impulses gladly. So you make accommodation: shuffling commitments, begging for clemency from bosses, friends, family members, significant others. You assure them that it’s just this once, that it won’t happen again. But you, and they, know differently.

Let’s suppose there are five unclaimed hours in your day. Suppose again there is a 2018 Jaguar F-TYPE R-Dynamic coupe at your disposal. And suppose the weather forecast shows clear skies, mild temps, and winds out of the northwest at five mph. Where to go? What would make a destination worthy of your time—to say nothing of the car?

If you’re anything like us, those five hours will unfold along these lines. And if you’re lucky, out of 300 possibilities, one minute—that perfect, fleeting alchemy of a zoned-in driver in a brilliant car on a perfect road—will dwarf all others.

There’s a Caldera Red 2018 Jaguar F-TYPE R-Dynamic AWD coupe parked outside The Drive garage, posed on the loading dock like some beautifully carved side of British beef.

The C-X16 coupe concept of 2011 was scarcely altered for F-TYPE duty. Short overhangs, long hood, rearward cab, and knee-weakening haunches still look as fresh and sexy as they did on the Frankfurt Motor Show stage. Inasmuch as a sports car stays in market longer than most vehicles—and consequently must hold the public’s fascination for longer—the F-TYPE coupe is on some Ponce de León trip; the fountain of youth courses beneath its skin.

A 2018 R-Dynamic model bears new exterior cues to geek out on: gloss black sills and skirts, revised J-blade daytime running lights, and 20-inch split carbon fiber/satin dark grey diamond-turned rims that fill out the fenders like they grew there in place. Slide inside, and redesigned sport seats with suede-cloth inserts make what was already a form-fitting cockpit feel even more tailored around the driver. Swathes of black leather are pulled taut across door panels, console, wheel, and dash. It smells really good in here.

Traffic is nonexistent, and sunlight is dancing across the east-facing windows of Lower Manhattan. You’d be a sworn enemy of celestial bodies to choose the tunnel. Brooklyn Bridge, all day.

It’s easy to forget that the mile-wide waterway running along the West Side of Manhattan is the same body that helped shape Storm King Mountain. When the last glaciers retreated, they gouged out a fjord right at Storm King’s base. The Hudson reaches down 175 feet there—not that you’d want to find out firsthand. On the Highway, it’s eyes up and hands steady.

Declare your successful extraction from New York City here: a lookout point above the Palisades of New Jersey.

"That’s the V6 one, isn’t it?” a sharp-eyed driver of a Sprinter van asks, clearly aware that those center-mounted Howitzers below the F-TYPE's bumper can only mean a supercharged V6 powertrain. “Sound good?” he adds. Later, as you’re overtaking him on the Palisades Parkway, you resolve to downshift a gear—make that two—to aid his assessment. The driver honks and flicks his high beams. Either he loves the sound of 93 octane exploding downstream in the F-TYPE's exhaust system, or he hates you. Possibly both.

The parking lot of the Palisades Parkway Visitor Center and Bookstore, a left exit off the road, unofficially marks the start of New York’s hill country. Beyond it are beautiful, freshly graded and paved roads that skirt lakes and rivers, with challenging sweepers to tackle and delectable esses to link—but not today. Your destiny lies 11 miles north.

Read between the lines of the posted caution signs, and you’ll glimpse an invitation to motoring nirvana. Storm King Highway announces itself in tantalizing shorthand: slides, dangerous curves, fallen rocks: the gang’s all here.

Go ahead and summon your worst Sean Connery impression: “Welcome ... to The Rock.” Storm King cuts the profile of a dormant god. That scar across its breast, now 95 years old, is owed to dynamite crews who rappelled down to load their charges. Boaters dropped anchor to watch them work: road-building as spectator sport.

A couple of sighting laps are in order; this road rewards familiarity, not brashness. Thickly wooded curves lead to to a gradual upward grade. Around mile two, the trees fall away, leaving motorists exposed—the weathered, pocked granite wall offering nothing but cold comfort. Topping out at 420 feet, the road then bends into a series of esses before transitioning into a fast downhill plagued by frost heaves. Savvy drivers take advantage of a gravel turnaround on the right, before the town of Cornwall-on-Hudson begins in earnest. Rinse, wash, repeat, then repeat again.

Something curious happens on the fourth or fifth pass. It may not register until later, when the car is at rest, its engine ticking itself cool. That’s the funny thing about transcendence—it might only reveal itself in hindsight. As you revisit the lap in your mind’s eye, though, the evidence is overpowering: You had a Moment.

Storm King Highway is short, but it contains universes. There’s an ancient bargain at work between the road, gravity, and the limits of lateral adhesion—the scenery simply heightens the awe. Idling at the road’s entry point—windows down, sparrows chirping, an unseen freight train trundling along the riverbank below, breeze carrying the vegetal funk of a Northeastern woodland—you awaken to a planet spinning on its axis.

The F-TYPE continues its idle, but with your left foot holding the brake, your right inches over to the gas. When revs reach 3,500 rpm, you release the brake. The car leaps. Birch leaves blur into a zoetrope of mountain summer. As velocities grow, your grip on the wheel remains loose and light. Sun breaks through the tree canopy in rapid-fire flashes. Downshift from fourth to third before the road bends uphill—cackles of exhaust overrun threatening to dislodge the fieldstone retaining wall. Charging uphill, the sun rising with you, Storm King is at once alive and completely oblivious to your movement.

The esses and downhill are dispatched with an efficiency that feels like muscle memory. Pirelli P-Zeros never feel overloaded or overburdened, and not one frost heave upsets the chassis.

Seconds later, you’re coasting into Cornwall, but it takes a second for your eyes to adjust to the 19th-century charm of the place. Transitioning from something so visceral and elemental into a town is like passing through a wrinkle in time.

Speaking of, when was the last time you checked your watch?

You settle in for a relaxed, two-hour cruise city-ward, via U.S. Route 9W. The middle-aged motorcycle brigades are out now, along with hiking groups and cycle pelotons. You’re already pining for the solitude of Storm King.

The long causeway leading to the Iona Island Bird Conservation Area seems a good place as any to reflect for a minute. Getting out of the car, you spook a great blue heron from the cattails. Its five-foot wingspan practically blots out the sun. The black, bitter crows of 90 minutes ago feel a universe removed from this place, from this moment.

All drives take you somewhere. But not every drive transports you.