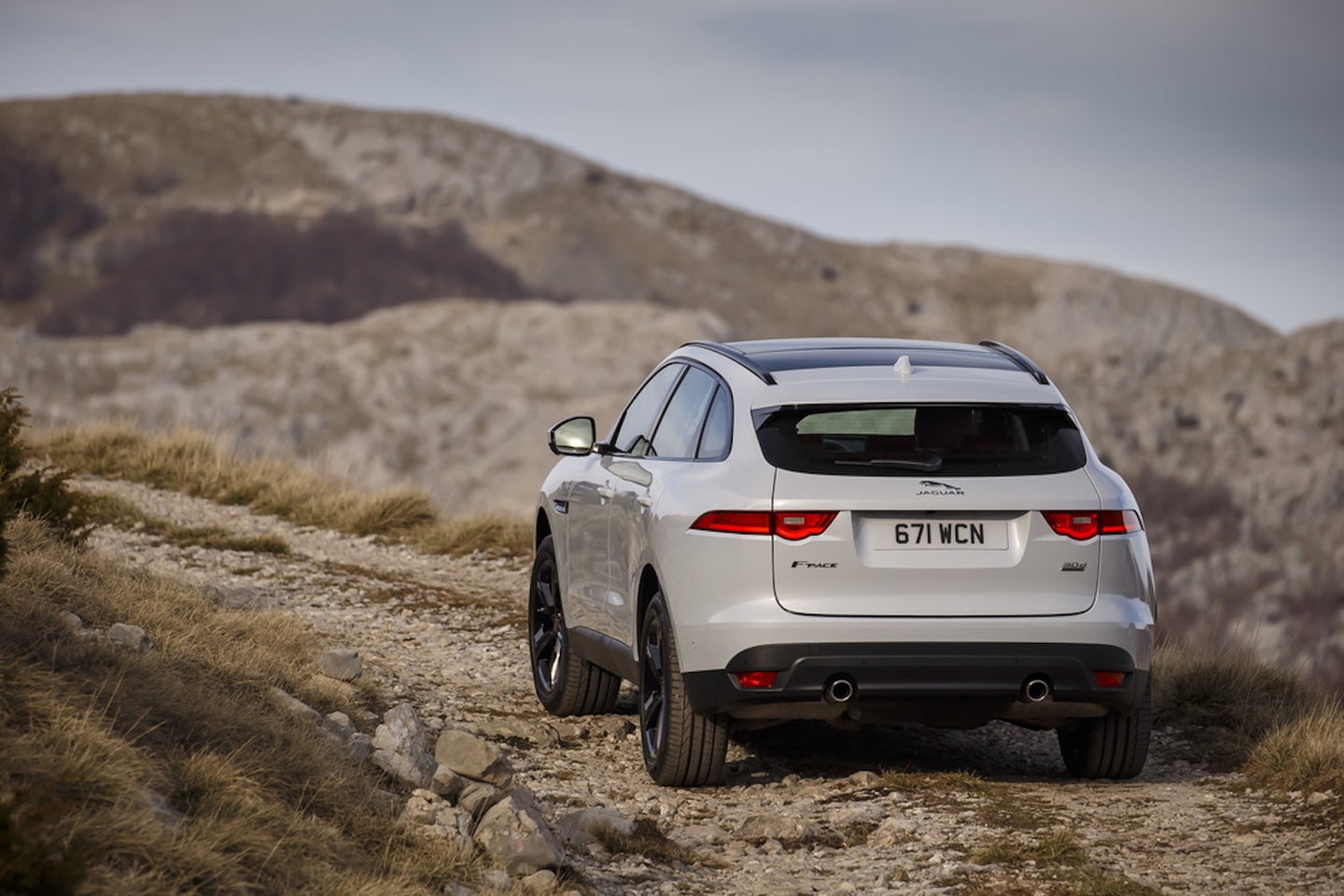 I’m not sure how Jaguar got so royally screwed on the government’s fuel-economy rating of its diesel-powered F-Pace, but I am sure that you can ignore the EPA’s ridiculous lowball of 26/33 mpg for city and highway. With little effort, I topped 40 highway mpg every time I jumped aboard the Jag, including one 70-mile run at 42 mpg. The F-Pace also smoked its EPA rating of 29 mpg in combined driving. I recorded a thrifty 34 mpg overall, and that included some mileage-sapping crawls through New York’s boroughs.

In Jaguar fashion, the F-Pace has already forged a consensus as one of the market’s prettiest SUVs. The athletic handling of the aluminum-intensive F-Pace is also well into the 90th percentile of today’s crossovers. Given that—as well as VW/Audi/Porsche's abandonment of diesel—the F-Pace 20d becomes a real showroom unicorn: A stylish, sporty British alternative to German, Asian and American luxury crossovers, with mileage that none of them can touch.

Despite any foul residue of VW’s multi-billion-dollar Dieselgate scandal, Jaguar Land Rover still sees a future for compression-ignition engines in the U.S. Jaguar offers its four-cylinder Ingenium turbodiesel on the F-Pace, XE and XF sedans, while Land Rover offers it on the Velar; a diesel V6 is available for the Discovery, Range Rover, and Range Rover Sport. That four-cylinder, aluminum-block diesel weighs just 308 pounds, and boosts efficiency with variable oil and water pumps, along with piston cooling jets that operate only when needed. That efficiency earns the midsize, rear-drive XF sedan a 31/42 mpg federal rating. Add AWD to match the F-Pace’s standard set-up, and the XE and XF sedans still earn a stellar 30/40 mpg rating.

Sure, Jaguar’s SUV is taller and less aerodynamic than the midsize XF, and at 3,913 pounds, weighs 160 more than the AWD sedan. But those relatively minor differences, as Jaguar executives acknowledged, don’t fully explain why the diesel F-Pace performed so poorly on the EPA test cycle by comparison. We’re talking the identical engine (and identical ZF eight-speed automatic transmission) as the XF here.

The truth, fortunately, is that the diesel F-Pace can easily achieve 40 mpg on real-world highways, and showed me the identical 34 mpg overall that the EPA attributes to Jaguar’s AWD diesel sedans. I enjoyed even better highway mileage in the compact XE, seeing up to 46 mpg, but the point remains: Among luxury SUVs, this F-Pace is the fuel-sipper supreme. And when you consider the notorious thirst of Jaguar’s V8-derived, 380-hp supercharged V6—it’s rated at an anemic 20 mpg overall in the F-Pace—my diesel’s 34 mpg represents a dizzying 70 percent improvement. Even the new-for-2018 F-Pace 25t, with its 247-hp gasoline turbo four, is rated at 24 mpg overall—10 mpg shy of the diesel’s tested performance.

Fine, you may be thinking: This F-Pace can pinch pennies. But will it pinch my driving style? If your goal is SUV stoplight races with BMW X3s or Porsche Macans, the answer is yes. Despite its chunky 318 pound-feet of torque, the 180-horsepower diesel does blunt the speed of gasoline versions, especially the F-Pace S with the aforementioned 380-hp V6. The diesel’s acceleration from 0-60 mph is languid, at a Jaguar-tested 8.2 seconds; the F-Pace S gets there in 5.1 seconds, a crushing 3.1-second advantage. The diesel’s low redline, with full-throttle upshifts coming around 4,400 rpm, is also not conducive to SUV hooning. There’s no high-revving urgency, and this Jaguar also bogs down if you get caught in the wrong gear: That peak 318-pound feet is packed into an extremely narrow window of just 1,750-2,500 rpm. A BMW M2, to cite one example of a leading turbocharged gas engine, spreads peak torque over a vast plateau from 1,450 to 4,750 rpm.

Yet this F-Pace never feels slow or sluggish. The Jaguar’s lumberjack torque delivers a solid boot for passing and freeway merging. Top speed is a healthy 129 mph (though the V6 model can hit 155). There’s a bit of diesel tick-tock at idle, but it’s nothing untoward. Generous sound deadening quelled some of the diesel coarseness that I recalled from the small XE sedan. And this diesel four-banger—significantly lighter than the Jaguar’s V6—is no detriment to the F-Pace’s febrile steering, powerful brakes and mischief-seeking suspension. The 20d model definitely takes a few more seconds to get up to speed. But once there, the 20d negotiates curves like any other F-Pace, which is to say very well. Naturally, a word for diesel range: A light-foot could easily cover 600 highway miles on a nearly 16-gallon tank, or 10 hours at an average of 60 mph.

Engine choices aside, this Jaguar evokes all that is great, middling, or bad about the F-Pace. The “great” includes head-turning looks, ultra-quick steering and dynamic handling, a virtual absence of body roll, and the packaging that somehow squeezes a class-leading 34 cubic feet of cargo space behind rear seats. “Middling” describes the Jag's rocky ride on city streets, a surfeit of road noise at highway speeds, and the InControl Touch infotainment system, whose 10-inch screen is hampered by dinky icons and balky responses. The “bad” is the interior materials. As in the F-Type, there’s a Rubbermaid, Nissan-esque quality to many materials—even the leather—that doesn’t befit a car of this price. As in the F-Type sports car, the plasticky console shifter especially cries out for a mercy killing. My guess is that with $50 of its own money, Jaguar could upgrade to a metal-and-leather shifter in the Audi vein, so what’s stopping them?

This F-Pace 20d starts from $47,270, a reasonable $1,500 upcharge over the comparable, 247-hp gasoline version. It’s $1,500 less than an F-Pace 30t with the stronger, 296-hp version of that same gasoline four-cylinder. (That F-Pace 30t nips 60 mph in a fleet 5.7 seconds). Finally, there’s a yawning $13,500 gap between the F-Pace diesel and the fancy F-Pace S with its blown 3.0-liter V6, at $60,770. My test model happened to be an F Pace 20d R-Sport, starting from $56,670. That top-shelf model adds such standard features as 20-inch alloy wheels; a body kit and metal door sills; adaptive LED headlamps with automatic high beams; 18-way front sport seats; automated emergency braking, lane keeping and reverse traffic detection. With two extra packages and options including a full-size spare tire (awesome), this nearly-loaded F-Pace checked out at $65,156.

Beyond the Jaguar showroom, virtually none of the F-Pace’s gas-powered rivals can reach even 30 highway mpg, let alone the Jag’s 40. The stingiest rival, the Lexus RX 450h hybrid, delivered 27 highway mpg and 28 mpg overall, both well shy of the Jag’s respective 40 mpg and 34 mpg. And if the Jaguar sits near the top of the style-and-sport spectrum among luxury SUVs, the Lexus may be bottom rung on both counts.

Even using the cockeyed numbers of the EPA, which shamefully underplay the diesel’s actual efficiency, the F-Pace 20d owner would spend $1,550 a year to cover 15,000 miles. That compares with an annual $2,300 to fill the supercharged V6 model with premium unleaded. Over five years, that’s $3,750 in savings at the pump, and I’m convinced the real-world savings would be much higher.

Do Americans—let alone luxury SUV buyers—care much about saving money and fuel, or extending driving range to bladder-busting proportions? Volkswagen fanatics certainly did. Prior to Dieselgate, nearly 25 percent of VW buyers were choosing a TDI model.  JLR’s diesel penetration will surely never reach VW levels, but contrary to what one might expect, the brands’ diesel sales don’t appear to have suffered due to VW’s scandal. A JLR spokesman said that, coincidentally, the Range Rover and Rover Sport diesels officially went on sale the very day that the VW scandal broke in September 2015. Yet around 20 percent of Rover and Rover Sport buyers opted for the diesel version in their first few months of sales, exceeding the company’s best projections. Since then, JLR's diesel sales have chugged along (pardon my word choice)at roughly 10 to 14 percent among models that offer the optional engines; on the lower end of that for Jaguar’s small XE sedan, and higher for Rover’s larger SUVs.

As noted, the British-built F-Pace is already a great way to break away from the luxury SUV herd. Opt for the F-Pace 20d, and you’ll definitely be the oddball of your neighborhood. Just remember that oddballs can be smart.