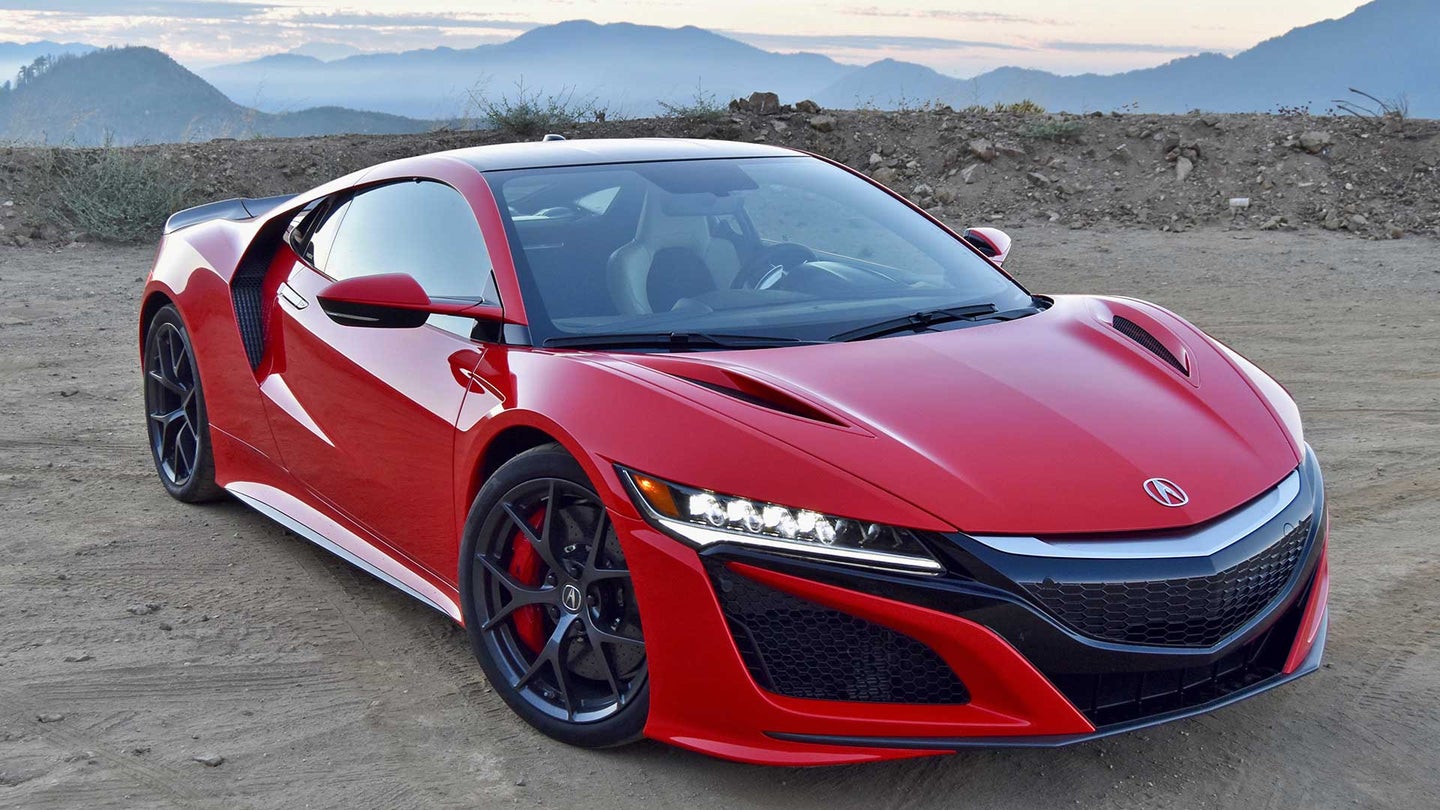 There's a thin veil of gauzy fog stretching across a pre-dawn Angeles Crest Highway. My ears pop because of the altitude—elevation 3,000 feet and climbing.  The occasional crosses on the roadside paying tribute to the victims the highway has claimed stare back, ominous, as I wind my way up. Even though I grew up in Los Angeles, this is my first time driving the Crest. I've never owned a vehicle I felt worthy of this deliciously curvy, 66-mile stretch of highway. I’ve been holding out, waiting to do it in a proper sports car....until finally, I was offered the chance to do it in the 2017 Acura NSX. A vehicle that portends the future of sports cars by carrying not only a 573-horsepower engine, but also hundreds of pounds of batteries and electric motors.

Will this promised future be a positive one? Seemed like the Crest was the perfect place to find out.

Truth be told, this wasn’t my first time on Angeles Crest, which extends from the foothills of La Cañada Flintridge, a suburb of about 20 minutes north of downtown L.A., to Wrightwood, a small skiing village on the backside of the San Gabriel Mountains. An ex unceremoniously drove me along it in his ’92 Jeep Cherokee Sport on our way to go fishing, but that was more than a decade ago. Around the same time the first generation NSX disappeared in 2005, in fact. The first version of the New Sportscar eXperimental, as the three-letter NSX abbreviation stands for, was (arguably) the most important sports car of the last 25 years. The Ayrton Senna-tuned supercar was a poke in the eye to the clunky exotics of the day; by creating a simple, comfortable, reliable supercar, it breathed new life into the class.

In comparison to that naturally-aspirated athlete, Honda's latest-generation newbie that now catapults me through mountain passes—dynamited out of the granite by convicts during the Crest’s 27-year construction—is a cyborg. The new NSX’s nine-speed dual-clutch automatic gearbox connects to a hybrid 3.5-liter twin-turbo V6; it isn’t even linked to the two electric motors that make up the car’s advanced front-axle torque vectoring system. I keep wondering when this transformer is going to turn into a robot and start shooting projectiles out of its arms.

Temptation makes me want to look over the cliffs as Los Angeles, bathed in dewy first light, blurs past. But I don't dare. Even though the Crest’s grade never exceeds 6.5 percent and few of its curves have a radius tighter than 300 feet, the acceleration in the NSX is brilliant enough to make those turns feel tighter. The instant-on electric torque explodes the car along, thanks to those aforementioned front electric motors. And Acura has successfully conquered turbo lag via torque-fill. But this supercar isn’t beating me up. I’m hitting speeds that would make a radar gun go pale, and my palms aren’t sweating. What the hell is wrong here?

Maybe I’m not pushing the car hard enough, I think. I’ve seen the videos of people going insanely fast up here, being spit out of Tunnel 1 and off cliffs, or dropping bikes at asinine speeds. But after blasting into a turn just before the highest point of 7,901 feet at Dawson Saddle, I decide I’m not doing anything wrong. It’s the NSX. It makes driving easy. The more trouble I get into around a turn, the more stable the NSX becomes simply by applying more throttle. And this was supposed to be a gut-roiling experience. Maybe this is just the way things are now.

The NSX has been anointed, not only by the automaker but also by many in the media, as an everyday supercar. Isn't that oxymoronic? Nowadays, when so much of performance car marketing is driven by Nürburgring lap times—which require crazy tire compounds, giant brakes, and torso-hugging racing seats—this car by comparison feels a bit like Fisher-Price’s My First Supercar. Its seats could keep any backside comfortable through an hour and a half on the 405 Freeway at rush hour (i.e. any hour). Cars this fast aren’t supposed to be comfortable. But damn, it’s fun.

This car—spirited but not boisterous—does not lack for ability. But in my mind, sports cars are supposed to be brash and arrogant. The NSX stands in defiance of convention. Friends would ask "Is it on?" when it slipped into its ninja-like electric-only mode. As I push through serpentine turns winding between the charred remnants of forest fires, I think about those supercars that were the growling monsters on posters lining my high school boyfriend’s walls. The Lamborghini Countach and Magnum P.I.’s Ferrari 308 GTS were guttural animals that demanded you know they were coming. Are the things we associate with sports cars–the noise, the medieval ergonomics, the sketchy build quality—all made passé by this new type of speed machine?

The sun climbs higher, transforming the sky into a shade reminiscent of a Tiffany's box. My hungry stomach growls more audibly than the NSX. As Woodwardia Canyon—a verdant gorge named after a variety of fern—slips past and I head back down into the fog of the real world, I wonder what the next chapter in the story the NSX about our automotive future tells will be. 10 years from now, will an autonomous car ferry me around the twisties while I file my nails? Or worse, while a computer files my nails for me?

There is something fundamental—primordial even—in the strained patella tendons depressing a hard clutch, the mental focus of listening to an engine and judging when to shift, and the precision of dialing in the perfect amount of turn angle with one’s own sweaty palms. Things were good the way they used to be, I think. It’s losing the satisfaction of doing the work myself that I’m resisting.

Satisfying as my morning on the Crest was, I regret having waited so long to drive it. Back in its day, I’m sure my ’88 Mazda MX-6 would have loved taking a blast up here. But hey, regret is a fool’s diversion. As for the NSX and whether it’s a real sports car or not...well, I can come around to this digital, high-tech future of the automobile. In the interim, however, I guess I’ll need to drive it on the Crest a few hundred more times.

Y'know, just to know for sure.