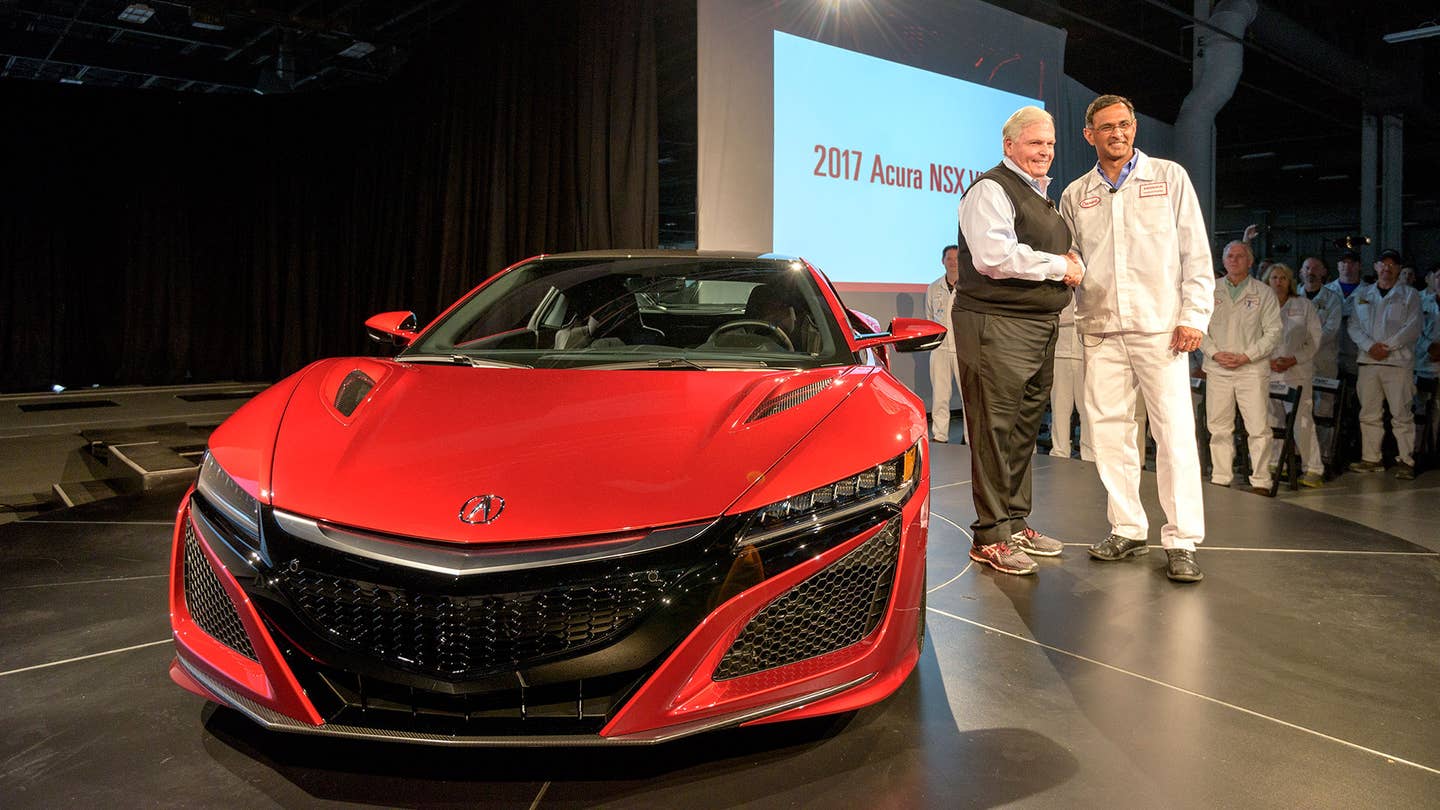 After a painful gestation that included a full back-to-the-drawing board redesign, the first 2017 Acura NSX has rolled off the production line in Ohio—and into the hot hands of NASCAR team owner Rick Hendrick. Have a cigar, you fans of Japanese performance and hybrid-tech savvy.

Hendrick drove the NSX supercar, a Valencia Red Pearl model with VIN 001, off the line at Acura’s new, cutting-edge Performance Manufacturing Center (PMC) in Marysville. The Sprint Cup dominator and dealership magnate called dibs on the first NSX, anteing up $1.2 million—nearly eight times the $157,800 base price—at a Barrett-Jackson charity auction to claim his prize. For good measure, Hendrick took home VIN 002 NSX, with plans to drive that one while preserving the 001 car in his motorsports museum in Concord, North Carolina. Proceeds from the $1.2 million sale will benefit the Pediatric Brain Tumor Foundation and Camp Southern Ground.

Following a morning event to commemorate the first showroom NSX, PMC workers began sending more of the 573-hp, 190-mph hybrid blasters down the line. Jerry Seinfeld and Jay Leno will each get one of the first dozen cars. Acura will build about eight units per day and about 800 per year, sending them off to battle such luminaries as the Audi R8, Porsche 911 Turbo S, Mercedes AMG GT, and Lamborghini Huracán. And while the Acura’s long and winding road to showrooms emboldened scoffers and skeptics, all is forgiven and just one question remains: Will enough customers, especially people already amenable to Japanese performance, consider the car worth the wait?

For Honda, the new PMC plant is a crowning chapter in an Ohio odyssey that began in 1979 with a motorcycle plant and its first product, the CR250R motocross bike. The next year, Honda announced plans for a $250 million factory next door, which began pumping out the Accord sedan in 1982. That Accord was a direct shot across Detroit’s complacent bow, one that would steadily upend the Big Three’s dominance in the family car segment.

On its meticulous, low-volume assembly line, the NSX is treated to a dozen patented processes, including the world’s first use of ablation casting in an automobile. Basically, ablation-cast structures use traditional sand-mold casting techniques with a soluble binder, rapidly cooling the molten alloy by blasting away and dissolving the sand. That creates a stronger microstructure, which allows lighter, thinner castings with superior crash absorption. (Take a bow, Acura engineers).

In nearby Anna, Ohio, at Honda’s largest engine plant, technicians hand-assemble the NSX’s 3.5-liter, twin-turbocharged V6 and mate it to a nine-speed automatic transmission and rear-drive electric motor. Those components are installed at PMC, along with the NSX’s biggest technological calling card: the sophisticated Twin Motor Unit that supplies electric propulsion and torque vectoring to the front wheels, a similar philosophy to the $845,000 Porsche 918 Spyder—but with dual motors to speed or slow each wheel individually (the Porsche has a single motor).

On this official birthdate for Acura’s brainy new baby, only one thing threatened to dampen the celebratory cigars: Acura officials touted the second-generation NSX as “the only supercar made in America.”

A pair of 600-plus-horsepower beasts, one from just north of Ohio, one south, might care to quibble with that. The Dodge Viper, hand-assembled on Conner Ave in Detroit, and the Corvette Z06 that hails from Bowling Green, Kentucky. Perhaps the NSX, Viper, and Corvette can settle that supercar question—and their differences—on the track.