The closest you’ll get to a McLaren SUV. 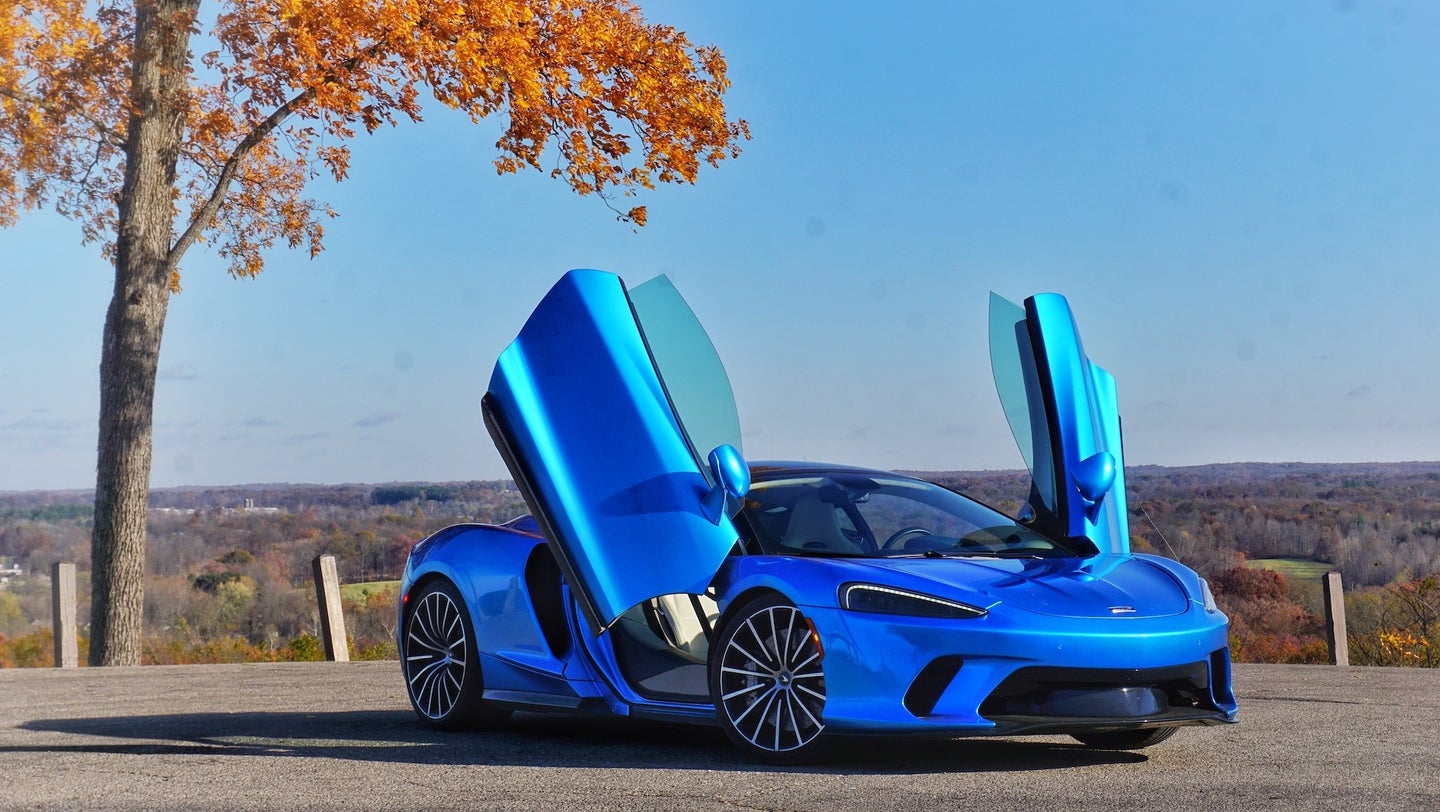 "These are not the doors of a billionaire," Russ Hanneman ranted while repeatedly slamming the normal, "millionaire" doors of his Maserati Quattroporte in HBO's Silicon Valley. Yes, these so-called billionaire doors are, in fact, pretty cool, but they're often precursors to not-awesome qualities found in supercars. Things like comical ingress and egress rituals, extremely low ride heights, rock-hard racing seats, deafening exhaust notes, abysmal cargo spaces, and more commonly, bone-crushing ride qualities. Now, thanks to McLaren, however, one-percenters might be able to skip the chiro appointment after a weekend behind the wheel.

Last year, the smart and tidy folks at Woking announced they had been working on something different, yet familiar: a McLaren grand tourer. This new creation promised to be a supercar through and through but also boast creature comforts and luxuries not seen in any of the brand's other hardcore sports cars. In other words, a supercar that could be enjoyed over long distances rather than just a couple of hours on a Sunday or a few track days per year.

Cue in, the McLaren GT.

In the Before Times when people could still do such things, my boss, The Drive's Editor-in-Chief Kyle Cheromcha, drove the GT at its global debut in the South of France, where I imagine he behaved like a maniac and terrorized every quaint village from St. Tropez to Monaco. Regardless of his behavior, he walked away calling it "the driver's grand touring car."

While that's great and all—and I can now confirm that he's right—there's a big variable that you simply can't grasp on a one-day test drive: livability. And as it turns out, livability is an important factor in a grand touring car like the GT, at least more so than in something wild like a Senna or the new 765LT.

So, for that very same reason, I took advantage of the gorgeous fall weather and scenery—and not to mention a 2020 GT that McLaren kindly dropped off at my house with a full tank of gas—and drove it for hundreds of miles over several days. I packed both of its trunks full of stuff (yes, including Costco toilet paper), ran errands with it, used it to shuttle my kid to and from school, transported firewood, lawn chairs, and even drove it on a dirt road thanks to a Google Maps snafu.

My mission? Validate the car's very own nameplate. See just how much "touring" I could do here, and how grandly.

I know what you're thinking: supercars aren't supposed to be comfortable, tame, or rational. If that were the case, the non-fictional Bruce Waynes of the world wouldn't drive them. But at what point do you say enough is enough with the supercar nonsense? Y'know, the unpracticality, the pretending you're having a great time behind the wheel but your thighs and back are screaming in pain due to the seat bolsters? Does that moment come with age, or simply when your non-masochist significant other blatantly refuses to go for a ride?

By definition, a GT car is a high-performance vehicle that's designed and built for traversing long distances at high speeds. These typically sit a little higher than hardcore sports cars, have more forgiving suspensions, big 'ol engines up front, enough room for a couple of suitcases, normal-ass doors, and more interior amenities than their non-GT counterparts. For example, the Aston Martin DBS Superleggera, Lexus LC500, Bentley Continental GT, and Rolls-Royce Wraith are all solid examples of prime GT cars. The old Porsche 928 is another classic example.

If you think about it, though, right off the bat the McLaren doesn't exactly fit into that mold. For starters, it looks more like a freaking race car than it does a normal production car, the ride height sits considerably lower than any of the aforementioned grand tourers, the engine is behind the driver instead of in front, and it ditches normal doors that open sideways for fancy units that thrust themselves into the air.

Inside, however, things are more GT-ish.

Not Your Typical McLaren

The cockpit of the GT feels airy, mostly thanks to its minimalist design and the—are you ready?—$6,000 electrochromic glass roof that can basically tint itself at the push of a button to allow more or less sunlight in. The footwells are deep to accommodate tall drivers, and the roof sits higher than in the Corvette C8 I recently drove, or at least it feels like it to me. Visibility, too, is more akin to a bigger GT car than a low McLaren supercar, and that's a very good thing whether you're navigating parking lots or country roads.

The steering wheel and dash are also wrapped in leather instead of Alcantara like the rest of the lineup, and everywhere your butt, legs, elbows, and hands touch is wrapped in leather or some sort of soft-to-the-touch material. The infotainment screen is on the smaller side, but it gets the job done and the operating system is easy to figure out. It sort of works like an iOS device but visually it looks like an Android device. The entire experience is very upscale, with nice graphics on the screen and the ability to customize many interior settings like mood lighting color, timers, climate, etc.

Then there are the seats. Let me just say, I could make this entire review about the seats and the seats only, but for the sake of your sanity and my career, I won't do that. As an extra-large guy, I oftentimes dread getting into European hoonmobiles that punish you for your lack of exercise and inadequate eating habits, but not the McLaren GT.

The seats in my tester were wrapped in Porcelain color Nappa leather, which despite not featuring any intricate stitching patterns like other pricey Brits, they looked and felt the part. They were, of course, power-adjustable, generously padded throughout, and most importantly, heated, which made multiple 30-degree morning school runs quite comfy.

The seat adjustment controls are difficult to understand as they're located on the top right corner of the seat, basically jammed against the transmission tunnel to the point that you can barely squeeze your hand to push on the darn buttons. Once I reached them and figured out how they worked, however, I was able to adjust my seat in quite possibly a thousand different ways until I found the perfect position. And I'm not kidding, they offer such a high level of adjustment for bolstering, lumbar, seat, seatback, height, etc. that I believe I may have experienced the most comfortable and customizable seat in any car—period. I may have had to pull up the owner's manual on my iPhone to comprehend how to do so, but by God I had that seat on lockdown after that.

Lastly, there were two memory settings and both seats featured an easy ingress-egress mode, meaning that the seats (and steering wheel in the case of the driver) would move all the way back and down in order to help you get in and out of the car. And let me tell you, that makes a huge difference when running errands around town.

If You've Got It, Flaunt It

In order to award the GT a rear cargo hold (trunk), McLaren had to pull a Houdini with the engine and hide it in plain sight. This meant placing the V8 as low as it could possibly go in the chassis and heat-shield the hell out of it to create what's basically a long shelf on top of it. Throw in a glass hatch to protect it from the elements, and voila! You've got yourself a trunk.

Some folks might be sad not to get a glimpse of the heart of the car, but not me. Instead of flaunting the twin-turbocharged unit, I flaunted other crucial items, such as toilet paper, camping chairs, firewood, and even a foil party tray with pounds of rice, beans, and tacos for our Sunday family dinner. I can imagine most McLaren owners will most likely carry golf or ski bags in the back, or a dozen Burberry shopping bags after a long day on Rodeo Drive. Regardless, whatever is in the back, people will be able to see—and definitely steal if that window gets smashed. If you want privacy for your items, use the frunk.

In terms of cargo space, it's hard to stack the McLaren against competing GTs because all of them have only one cargo hold due to their engine layouts, meaning that the McLaren may have an edge in cubic feet, but it's divided into two somewhat awkward compartments. This, of course, did not really pose much of a challenge to me during my errands or a weekend trip with my dad. In fact, when organized properly, there was room to spare.

I can't possibly write a McLaren review and not tell you how fast and exciting it is. So here, let me tell you: it's very fast and very exciting—just like a 612-horsepower British supercar should. The steering is go-kart-like—heaven-sent. Despite its three-setting handling configuration (Comfort, Sport, Track) and hydraulic power steering system, turning the wheel of the GT allows you to feel mechanical movement and an actual connection to the road. It's never too heavy, never tiring, just right.

Driving the GT on the highway is a similar experience to driving, say, a Mazda3 hatchback: responsive, firm, comfortable. On backroads, however, it turns into an absolute monster, devouring everything and anything you put in front of it. Perhaps one of the coolest features of the car is the fact that at the turn of two knobs, it can turn off its more civilized persona and become 90% of a "normal" sports McLaren like a 600LT or 570S. And thanks to an optional $3,500 sport exhaust system, sound like one too.

The fact that you can do all that while jamming to some Rolling Stones, having your bum warmed, hauling a bunch of cargo, and looking like an absolute rockstar is simply amazing.

I'm an equal-opportunity car enthusiast, and I'm just as charmed by a Ford Transit commercial van as I am by a $410,000 Rolls-Royce Cullinan or a convertible Mercedes-AMG. I like them all, I enjoy them all. There's a place and a buyer for all of them.

This McLaren, though, really has a way of connecting with you that I didn't expect it to have. I thought it would be rather squeaky-clean, razor-sharp, and somewhat robotic (ahem, BMW M8). But it wasn't. Perhaps the utilitarian attitude has something to do with it, the fact that it's comfortable and good at more things than just looking hot and going fast. It's a multi-faceted supercar, and I really enjoyed that.

I'm here to tell you that if you have approximately a quarter-million dollars to drop on a vehicle, and you're aching for a supercar, you no longer have to surrender performance, looks, or overall driving satisfaction in exchange for comfort and practicality. You can now have it all.

Hell, you even get those billionaire doors.