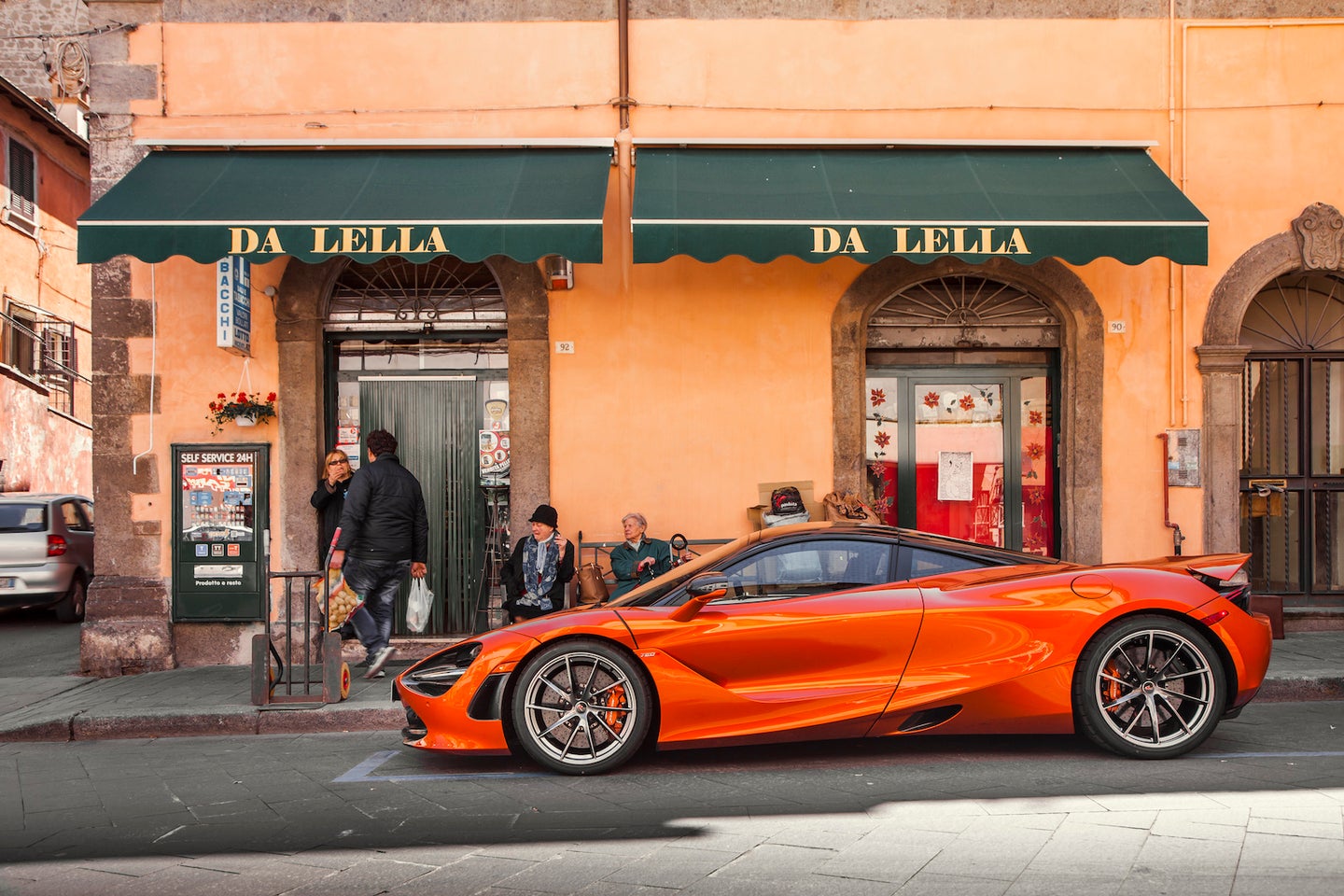 Rome wasn’t built in a day, and neither was McLaren. Founded in 1963 by the late, incomparable Bruce McLaren, the company cleaned up in Can Am and Formula One racing, but never built a single street car until the million-dollar F1 of the early Nineties.

Yet here we are in the 2018 McLaren 720S, racking up laps on Italy’s ticklish Autodromo Vallelunga circuit, and taking a memorable Roman holiday on public roads.

Profitable, growing, and firmly entrenched as a real rival to Ferrari and Lamborghini, McLaren will find about 4,000 buyers around the world this year. This company high includes a sold-out, first-year run of about 1,400 720S models. Even at a starting price of $288,475, those charmed owners will definitely get their money’s worth from the 720S.

McLaren’s second-generation Super Series model replaces the 650S. And it bests that formidable predecessor in all areas, from styling and speed to interior design, technology, and practicality. I flatly declare this McLaren a masterwork, one of the best realizations of the modern supercar art that I’ve driven. This, from a guy who was always a mite underwhelmed by the MP4 12C, the car that launched the showroom era of McLaren Automotive in 2010. Adopting McLaren Racing’s famously obsessive approach, each new street model – from the 650, 675LT, and P1 to the more affordable 570S and 570GT – has advanced the McLaren formula of lightweight carbon fiber construction and F1-based expertise while steadily refining the designs.

As 720S lead designer Paul Howse told us in New York, “We were a new company. And once the look was cemented, now we can build on it and push it forward.”

720S Is the Most Persuasive McLaren Design Yet

The resulting 720S is surely the prettiest McLaren yet: More a distinctive road car, less of a cold, track-bred exercise in function and Newtonian force. McLarens tended to look good until a Ferrari showed up to remind you what supercar sex appeal was about. From its jet-fighter teardrop canopy to its slippery, aluminum-skinned haunches, the 720S brings the requisite va-va-va-voom. And the McLaren delivers big time on its stated design brief: To approach the everyday comfort of the 570S, while nearly meeting the hardcore performance of the track-centric 675LT.

Aerodynamic bona fides actually get better, including a huge 56 percent gain in downforce versus the 650S. Many observers take issue with the 720S’ hollowed-out “eye sockets,” but I think they look fine, and they’re inarguably functional. The headlamps each house 17 ultra-compact LED’s, while the sockets direct air to low-temperature turbo charge radiators at the rear, part of an overall 15 percent gain in cooling efficiency.

720S Breathes Through its Eyelids, Stops on a Haypenny

The view around the sides and rear is all murder and menace, including the bravura vents that curl around the greenhouse (and cleave deep into double-skinned doors) to send high-energy cold air to radiators for the mid-mounted V8. That knee-wobbling view includes a visually lowered rear splitter and McLaren’s pivoting Airbrake (now 30 percent more efficient) that I can feel slowing and balancing the car as I enter Vallelunga’s Curva Grande, among the faster sections on any European track. In tandem with standard ceramic-composite brakes, the 720S halts from 120 mph in 384 feet; that’s 20 fewer feet than the 650S, and just three feet beyond the seven-figure McLaren P1 hypercar.

I’d already driven the 720S here from a swanky hotel in Rome, where the McLaren’s markedly improved interior – until now, the company’s Achilles’ Heel – impresses even when the car is standing still. The same goes for the “Loud Start” function. It ignites a squirt of unburned fuel in the exhaust pipe to coax a startling bark from the twin-turbo V8 behind my shoulders, causing well-coiffed heads to swivel in the hotel parking lot. As they should: The 4.0-liter V8, enlarged from 3.8 liters in the 650S, is a powder keg of 710 horsepower and 568 pound-feet of torque.

Grey-flecked Glacier White paint, a $4,960 option, adds the 720S to the list of new supercars that look amazing in white. (New, coppery "Azores Orange" is pretty hot, too.) Redesigned dihedral doors now take a slice out of the roof, making it easier to duck in beneath a hinged glass roof panel. An unlocking “welcome sequence” introduces the motorized Folding Driver Display, a dash-topper that unfurls an eight-inch TFT screen. Touch a button or move to Track mode and the entire screen binnacle pivots flat to reveal a Slim Display that shows only speed, rpm and gear selection on its thin edge, for better outward views and less driver distraction. Sure, it’s a gimmick, because the raised display doesn’t ever impede your view. But it’s a good gimmick, boosting the sense of surprise and occasion that every supercar should deliver. The opening sequence also bathes the engine’s cast-aluminum heads in red LED lights, another cocktail conversation (or argument-) starter.

The wonky old IRIS infotainment system, the inept bane of previous McLarens, is finally bid good riddance. A newly enlarged touchscreen, designed by JVC Kenwood and housed in a lovely Alcantara-trimmed floating console, offers intuitive smartphone-style adjustment of navigation, audio, and other systems. Cheap plastic switches are largely ditched in favor of robust knurled metal, and leather is sourced from Scotland’s famed Bridge of Weir. An optional, 1,280-watt Bowers & Wilkins audio system is dulcet and strong. Finally: a McLaren cabin that can hold its own not only against far less expensive Porsche 911 Turbos and Audi R8s, but also against fancily-wrought Ferraris and Lamborghinis.

Outward views seem unmatched by any mid-engine car, thanks in part to roof pillars as slender as a Milan supermodel’s forearm. Front pillars flash exposed carbon fiber. Viewed from outside the car, rear pillars virtually disappear under tinted Gorilla Glass, making the rear canopy appear a nearly unbroken, transparent vista. There’s no glovebox, but the 720S adopts the sleekly trimmed rear Luggage Deck from the excellent 570GT model. Add a surprisingly large frunk below the hood, roughly the size of a Porsche 911’s, and you’ve got nearly 13 cubic feet of cargo space. Forget weekend travel: a happy couple could tour Tuscany for weeks at a time, with room for a tuxedo and gown for opera nights.

Two ergonomic goofs: Confusingly designed power seat switches wrap awkwardly around the front of the cushion. A McLaren executive said designers didn’t want to clutter up the door panels with switches, but they’re already considering a re-location. Secondly, a leather-wrapped protrusion on the center console tends to jab a passenger’s left knee precisely where said passenger wants to brace it during spirited driving.

On my dash to Vallelunga, I paddle-slap through the reworked seven-speed, dual-clutch transmission – gear changes are up to 45 percent faster – and turn the McLaren’s fantasy numbers into palpitating flesh: The rip to 60 mph takes 2.8 seconds, and 7.8 seconds to 124 mph (200 kph), in the time it takes a typical car to reach 60 mph. The quarter-mile takes 10.3 seconds, dusting a Ludicrous-mode Tesla Model S P100D. Even Vallelunga’s generous asphalt isn’t long enough to contain the rest: 0-186 mph in 21.4 seconds, four seconds quicker than the 650S, and a 212-mph peak.

720S is Lighter, More Powerful Than Ford GT—So it Has to Be Faster, Right?

A class-beating dry weight of 2,829 pounds is about 40 fewer than the 650S. Topped with fluids and extra equipment, that rises to 3,128 pounds for my Luxury model. Hmmm ... so the $290,000 McLaren weighs 225 fewer pounds than the $450,000 Ford GT. It’s got 63 more horses and a larger 4.0-liter V8 to the Ford’s 3.5-liter twin-turbo V6, to win the critical power-to-weight battle. If tire grip and aerodynamic efficiency are roughly equal (and I’d put McLaren’s F1-honed expertise up against anyone’s) the 720S will surely be the faster supercar. But that’s a battle for another day.

I drive a few track laps for posterity with the onboard, three-camera Track Telemetry system. It puts real-time driving and lap data in the driver’s sightline. Later, you can compare data and video laps with other (ideally superior) drivers, and analyze myriad parameters to improve your skills.

McLaren Lets You Free Your Soul, Drift Away

Next, I ride shotgun with Gareth Howell, the company test driver and serial British Touring Car Championship race winner. Howell ably demonstrates another 720S talking point: Variable Drift Control. VDC makes a science of sliding, as drivers input the exact amount of drift angle the car will allow via a fingertip slider on the center screen.

“It’s not a magic button,” Howell cautions me through our audio-connected helmets. “You won’t suddenly be angled at 45 degrees and looking like a hero” without the requisite driving skill to match, especially in a car with such volcanic power and roadholding grip. Instead, VDC wraps the McLaren in a protective electronic blanket of nine discrete increments that drivers can peel back as their skills improve. In Howell’s professional hands, he shows how the system moves from strict nanny to freedom-loving hooligan. Chris Goodwin, McLaren's chief test driver, also showed us how it's done in a bravura drifting video released before the car's Geneva reveal:

A Gladiator's Return to Rome

I resist the urge to dial up a sideways departure from the track parking lot, but now it’s time for my own antics. Returning to Rome, McLaren’s British invader torches the Italian countryside, shrieking to 8,100 rpm and turning mortal cars into pylons for my personal exercise and enjoyment. I admire the 720S’s newly urgent exhaust note, its flattering (and all-natural) frequencies ported into the cabin via a sound symposer. It’s another gain for a McLaren, whose earlier Super Series models often sounded turbo-muffled and uninspired, especially compared with free-breathing Italian divas.

As McLaren promised, the 720S’s steering is sensational, faster and more intimately connected with the road surface than the 650S’s. All-new suspension uprights and double wishbones trim 35 pounds of unsprung weight. The company’s latest, industry-unique Proactive Chassis Control, whose hydraulic dampers eliminate the need for weighty anti-roll bars, adopts new math-geek algorithms and a dozen new sensors to analyze and react to road parameters within two milliseconds. Switched to its supple Comfort mode, the McLaren seems to spread a coating of olive oil over crusty, country Italian pavement; dial the separate suspension and powertrain controls to Track and the McLaren indeed performs a thrilling impression of the track-centric 675LT, minus the jackhammer effect on occupants.

Like an addicted monkey pushing his button, I keep nailing the throttle, blasting past 160 mph on the Autostrada as cars slide right to let me glide past. Traffic thickens heading into Rome, the city’s death-wish scooter pilots buzzing the McLaren, flashing grins or a thumbs-up. I’m still feeling the pace, so what the hell: I slice up Rome traffic like so much prosciutto, looming up behind VW’s and Fiats before howling on by. The clock is ticking on dinner. But I’m thinking a detour to Vatican City, to pray for my own 720S. One look at this miracle baby, and I think Pope Francis would understand.

Lawrence Ulrich, The Drive’s chief auto critic, is an award-winning auto journalist and former chief auto critic for The New York Times and Detroit Free Press. The Detroit native and Brooklyn gentrifier owns a troubled ’93 Mazda RX-7 R1, but may want to give it a good home. You can reach him at lawrence