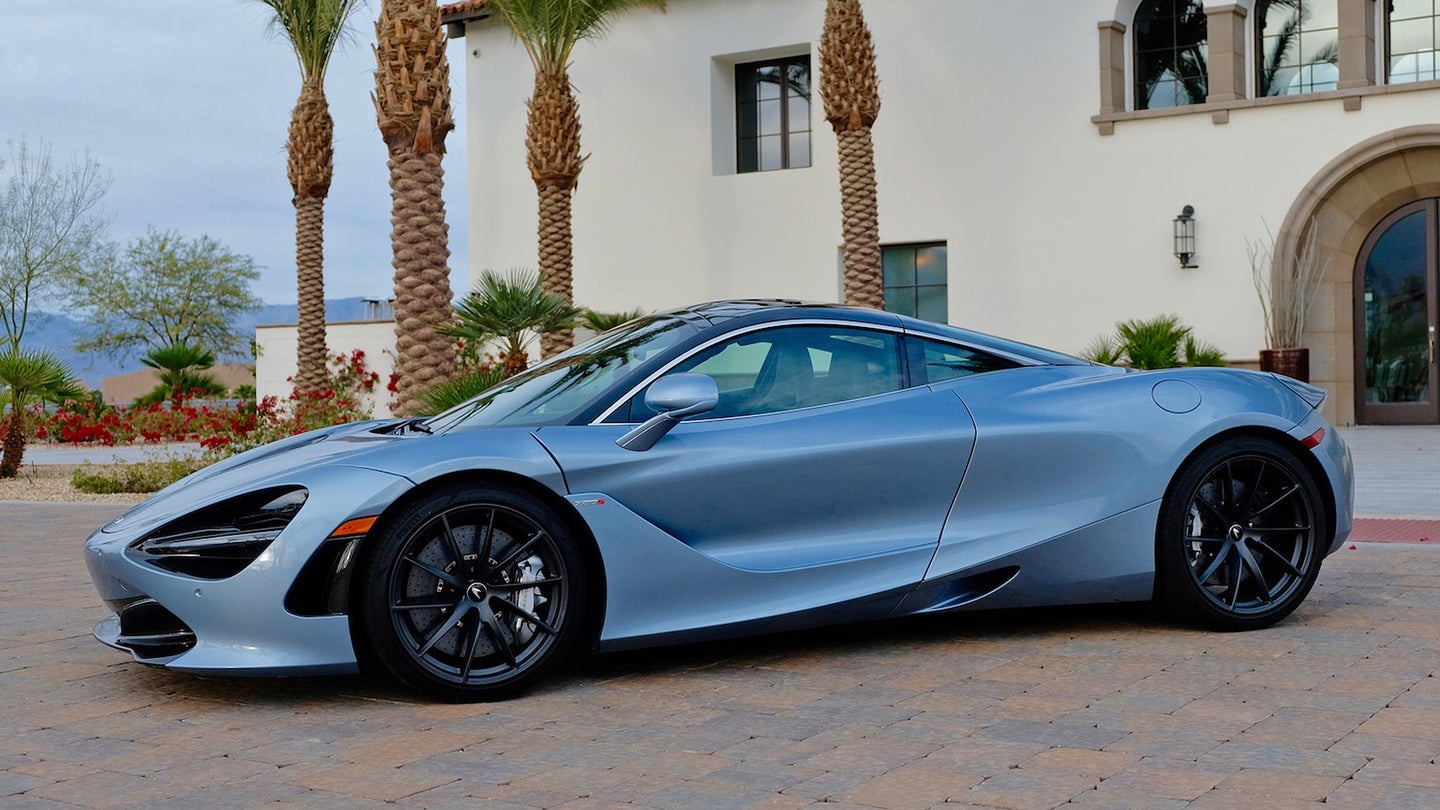 I’m guessing that luggage space ranks as a low priority for a McLaren 720S shopper, right down there with fuel economy or a cash-back rebate. But for the record, the 720S can hold a surprising amount of stuff for a mid-engine supercar that starts at $297,000. That included the pair of carry-on bags I submerged in the McLaren’s front compartment — think a Porsche 911's frunk, but even roomier—when I picked one up in Los Angeles for a weekend dash to Palm Springs. And just because owners don’t buy a 720S for its (modest) practicality doesn’t mean they won’t appreciate it—just as they’ll appreciate the manageable ride, or the visibility afforded by its jet-fighter-style glass canopy supported by slender carbon-fiber roof pillars.

McLaren, of course, has been advancing the idea of the approachable, everyday supercar, even if their products are for people whose incomes and lifestyles are the opposite of “everyday.” The 720S is the most comprehensive example of this idea yet made the wizards of Woking—a car that blends fantasy and reality at blender-set-to-frappé speed. This particular bit of California dreaming was a reunion, following my initial 720S street-and-track drive in Rome. I also managed to wheedle my way onto the private Thermal Club track near Coachella, thanks to the O’Gara Group, a Beverly Hills-based dealer of ultra-luxury brands.

As it happened, some gentleman drivers—impressively supported by McLaren of Beverly Hills—were working out race-prepped McLaren 570Ss when I rolled into Thermal’s desert circuit in my 720S. The sight of so many McLarens on one track underlined the brand's growing presence in the top rank of sports cars: Where many other marques seem hopelessly stalled (Lotus), or so tiny and hyper-exclusive that they barely compute (Koenigsegg, Pagani, Rimac), McLaren set another record with 4,803 global sales last year, a sizable 44-percent jump. Less than a decade since its founding as McLaren Automotive, the British brand has established itself as a straight-up rival to Ferrari and Lamborghini. In the brutally unforgiving supercar business, such success was anything but assured when the first MP4-12C rolled off the line in 2011.

My 720S underlines how and why McLaren has become a force so quickly. After landing at LAX and a fortifying lunch at In-N-Out—my girlfriend’s first, long-awaited visit to California’s burger institution—we walk to the garage next door where the 720S awaits, a 710-horsepower lozenge of mind-bending speed in a shimmering jacket called Polaris Blue. It’s an otherworldly machine, with the slippery threat of a manta ray and the exoskeleton of a biting insect. Hollow, air-inhaling headlamp sockets—I like their functional nature, a lot of people don’t—feed radiators at the rear; bravura vents form a moat around the teardrop canopy, and plummet into double-skinned doors, their cleavage invisible until you walk up for a peek. Those ducts send high-energy air into radiators for the twin-turbo, 4.0-liter V8, built by Ricardo to McLaren’s design specifications.

We’re tempted to let the 720S rumble around the crowded In-N-Out drive-thru, but think the better of it; losing fries between the McLaren’s saddle-leather seats would be a travesty. And it’s hard enough to escape this airport lot without working a reception line of appreciative fans. Swinging up the McLaren’s dihedral doors is like waving a red cape at sports car lovers, who tend to bull-rush the 720S and spit out questions, the least imaginative being “How fast does it go?” and “How much does it cost?”

The answers, for the record, are 212 miles per hour and $362,900 as-tested, the latter including roughly $14,000 of carbon-fiber exterior trim. But I might skip the doors’ optional slabs of tinted Gorilla Glass that arch over occupants’ heads, and not merely for their $3,760 price: One of my test car’s panels had a long crack, a problem that has beset numerous 720S owners. At another point, my McLaren’s audio system—managed through a new portrait-style, JVC/Kenwood infotainment touchscreen—conked out completely, although stopping and restarting the car did the trick. Still, they’re the kind of annoying glitches that have affected other nearly-new McLaren test cars I’ve driven, and something the brand needs to keep an eye on to keep owners happy and prospective owners reassured.

Yet these modern McLarens have a way of washing problems right out of your hair in blissful torrents of power and sensation. That begins before you’ve even begun, with a “Loud Start” function that squirts unburned fuel into the exhaust, awakening the twin-turbo V8 with a combative bark. For this opening run on LA’s freeway gauntlet, I’m content to sit back and let the McLaren’s computer-managed hydraulic damping system do its thing. Unique among sports cars at any price, the Proactive Chassis Control system eliminates weighty anti-roll bars, and, with a dozen added sensors in the 720S, can adjust the dampers at all four corners in less than two milliseconds. The 720S rides more firmly than more-affordable 570 models, yet it’s far more livable than the old, spine-hammering 675LT, especially in driver-selectable “Comfort” mode. The company used to call that setting “Normal,” but decided there’s nothing normal about a McLaren. That's about right.

Compared to its predecessors, the 720S cabin makes a tall leap in design, craftsmanship and materials, as was needed to keep McLaren competitive with Italian and other British exotics. There’s a striking flying-bridge center console, Scottish Bridge of Weir leather, and the aforementioned infotainment interface, which no longer feels like a Brookstone catalog leftover. Don’t forget the novel Folding Driver Display: Touch a button or dial up Track mode, and the TFT screen pivots and tucks into the dash, revealing an edge-type “Slim Display” that shows only speed, rpm and gear position. The idea is to limit distraction during serious high-speed missions. Though the necessity is debatable—the larger display is never distracting, and no one’s forcing you to stare at it anyway—the folding binnacle is still a cool supercar gadget that owners will love to show off for passengers. Some controls are still needlessly fussy, though, and the weird power seat switches—buried on the inboard side of the seat cushions—cry out for a more ergonomic location.

We roll through Riverside, where fabled Riverside Raceway was swallowed long ago by cookie-cutter strip malls and subdivisions. Perhaps it’s the ghost of Dan Gurney spurring me on, but I stand on the McLaren’s throttle to hear the hot animal breath of its dual turbochargers over my shoulder. Unfortunately, those turbo slurps and wastegate whistles are more entertaining than the engine note itself: The 720S’s angry-yet-monotone blat may be its biggest disadvantage in the supercar wars, especially versus the banshee wail of the naturally aspirated V-10 in the Lamborghini Huracan. But paddling a few upshifts through the seven-speed dual-clutch transmission—its gear changes up to 45 percent faster than the 650S—I glance down and realize we’re broaching 120 mph. Oops.

As Will Sabel Courtney noted in his 720S feature, this supercar requires the patience and self-denial of a saint (but not St. Senna) to keep public-road speeds remotely in check. I suppose I can say the same about several mega-powered cars, from a Porsche 911 Turbo to a Chevy Camaro ZL1. But the McLaren has a particularly insane way of making speed, of just arriving at places—the next turn, the next county—before you realize you’re there. Give in to temptation—and use the automated launch control—and the McLaren dispatches 60 mph in 2.8 seconds, and 124 mph (200 kph) in 7.8 seconds. Then wave a friendly “bye-bye” to a Ludicrous-mode Tesla Model S P100D driver, because the McLaren is faster in the quarter-mile, at 10.8 seconds.

After settling into Palm Springs, I head to the Thermal Club for a quick workout. I’m not at my hot-lap best, as an untraced stomach distress has me perspiring even on this cool day, and McLaren’s sensible reminder I’ll have no technical support at this track slows me down further. If I break the car or blow a tire, I’ll be calling Uber in Palm Springs. And I’ve already stormed Italy’s Vallelunga circuit in the 720S, anyway.  So I drive the Macca at 85 or 90 percent and try to feel what the car is doing instead of going 10/10ths.

First 9/10ths thought: the steering is sensationally quick, and gets better and more fluid the faster you go. I still feel that the Ferrari 488 Pista forges a more-emotional bond with its driver—hey, it’s Italian— but there’s something to be said for the McLaren’s cooly-technical approach. I also love how McLaren defies current trends with its slim-section steering wheel, which I prefer to the fat axe-handle grips on BMW Ms, Cadillac V-Serieses, and other performance cars.

The carbon-fiber-intensive Macca changes direction like a waterbug, thanks in part to a feathery 2,829-pound dry weight, climbing to about 3,128 with fluids and optional equipment. The powderkeg engine loves to scale its 8,100-rpm peak, aided by 568 pound-feet of torque and one of the flattest powerbands of any supercar. Forward progress is aided in Track mode by an “Inertial Push” feature that keeps fuel flowing to maintain momentum during gear changes, rather than cutting fuel or ignition spark as it does in to calmer modes. The brakes are sickeningly strong—and further aided by an enlarged Airbrake, the pivoting rear wing that whooshes up to help slow the car and generate downforce in turns. McLaren testing shows the 720S can halt from 120 mph in 384 feet, 20 fewer than the old 650S, and just three more than the seven-figure P1 hypercar. But my McLaren’s Pirelli P Zero Corsa tires—rather than optional Trofeos—do prove a weak link on track, squirming a bit under hard acceleration and during corner exits. Hey, it’s not easy to put 710 horses to the pavement through rear wheels alone, even for a McLaren.

I blast home to my friends in Palm Springs, reminding myself often that I’m no longer on track but making exceptions for every on- and off-ramp. It’s time for dinner, and we discover the McLaren’s biggest downfall: There’s no room for four people. The McLaren stays to decorate the driveway, and we pile into an Audi A4 Allroad instead. Whaddaya say, McLaren: Have you considered building a four-seater? Now that would be one practical Mac.