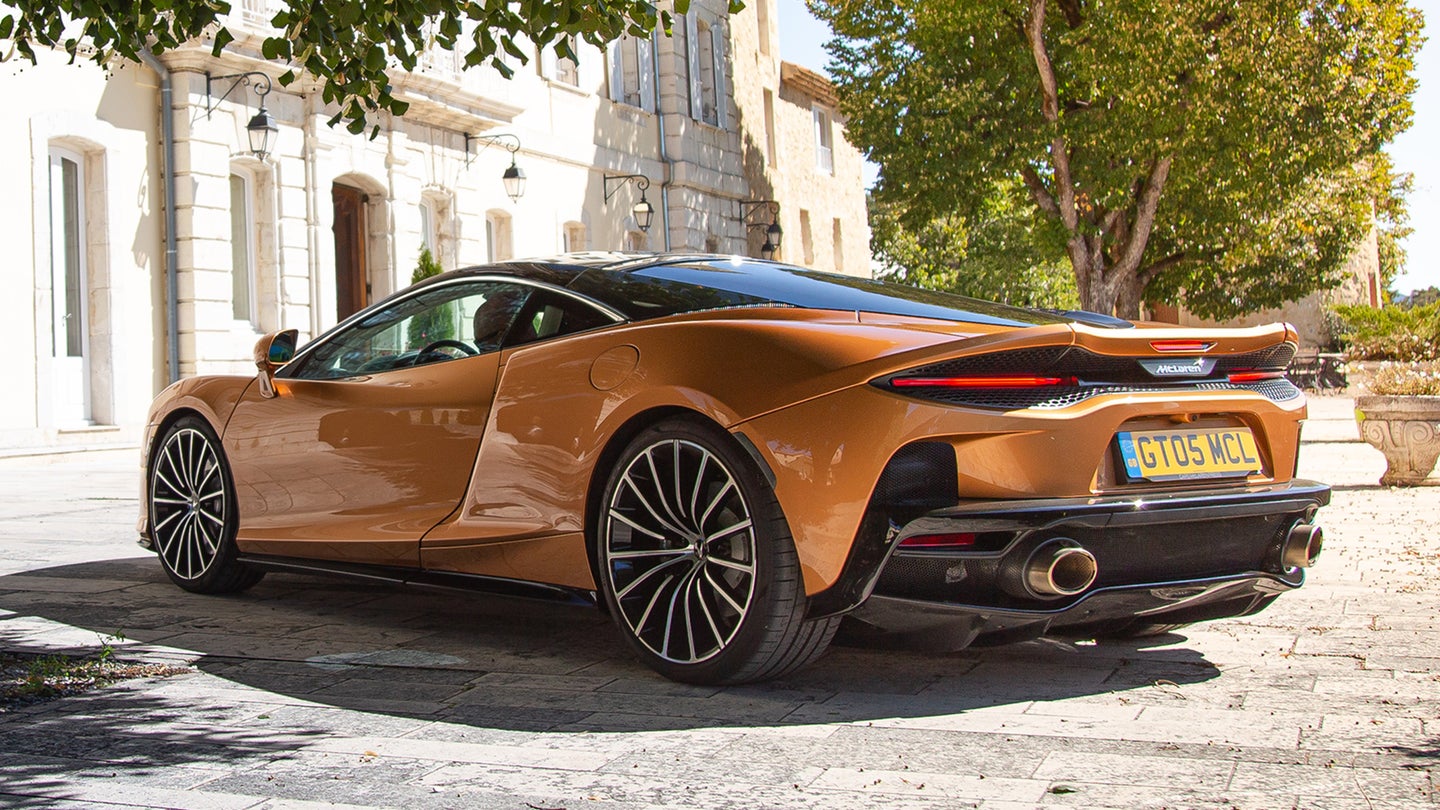 Nine years after waking from a slumber and emerging as a force to be reckoned with, McLaren Automotive's story of outrageous performance is penned in the tire tracks of supercars like the 600LT, the 720S, the P1. But it's a new dawn, it's a new day, and maintaining the turbocharged growth that's defined its first decade means eventually moving beyond two-seat track stars. This is its SUV moment. Or it would be, except...

"I'll give you as straight an answer as it gets. There is no SUV. We don't have a toolset. It's not in our capability set. Thing is, it would still have to pass the smile test, whether a driver would get out grinning like they would in, say, a 600LT," GT Global Product Manager Tom Taylor said. "If we can't make the world's best SUV, why the hell would we?"

Fair, and definitive. But as McLaren looked around, it decided that maybe it could make the world's best grand tourer, a luxurious SCUD that prioritizes high-speed comfort. So this is that effort: The 2020 McLaren GT. Fitting for a company that wasn't around in the golden era of grand touring in postwar Europe—think long, lithe coupes like the Jaguar E-Type or the Ferrari 250 Europa GT—McLaren's not hewing to those classic standards here. It's following the only course it knows: mid-engined, featherweight, and dynamic. And don't forget those dihedral doors.

To hear McLaren's chief engineer tell it, the development team drove every other GT under the sun and came away thinking they all went a bit soft in the quest to coddle. "When you line everyone else up, like the Aston Martin DB11, the Ferrari Portofino, the Bentley Continental GT, the Mercedes SL, they all do some stuff really well, but they're all compromised in some way," Adam Thomson said from the passenger seat as we drove the McLaren GT around the south of France last week. "I'm not going to pretend like we drove any of those, got out, and said yeah, that's the handling we're looking for. We're just not even in the same ballpark here."

Not even in the same ballpark. That's a strong statement, and one that's mostly true. In sum, the McLaren GT is still about performance first and luxury second, far more a sports car that's joyously quiet on the highway and happens to have room for two pair of skis. It's the lightest grand tourer in the class, and the only one you'll find with a carbon fiber passenger tub and a mid-engine setup. The line we heard over and over at the launch was that the GT is designed to be comfortable over thousands of miles of highway driving and a f*cking blast on the last few miles of B-roads between you and your final destination. There are a few areas where the vision doesn't feel entirely cohesive, but as promised, it's never not enthralling to drive.

Something New, Something Borrowed

Some key twists on the familiar McLaren formula were introduced. The mid-engine powertrain is a distinct departure from the traditional long-hood, grandiose presence of classic GT, so McLaren lengthened the car with expansive front and rear overhangs to give it the necessary presence and make it the longest McLaren short of the Speedtail. It's also got a noticeably higher ride than you'd expect from its svelte profile, but that's for the sake of everyday usability—approach angle (13 degrees) and ground clearance (5.1 inches) with the front axle lift are on par with a Mercedes-Benz C-Class sedan.

Smooth and slightly uninspired, the front end does away with gaping vents and other Trypophobia-inducing openings. It's a Saint Laurent jacket, impressive more for the label than the straightforward design. The rest of the car coalesces into a quiet riot of a rear end, elegant and sharp with gaping side intakes to hint at the beast within.

Every McLaren is based around a carbon-fiber passenger cocoon dubbed the MonoCell. That's fine when you're building a cabin with two seats and little else, but the McLaren GT has an open, airy interior that runs unobstructed from the windshield to the very back of the cargo compartment. To provide that without sacrificing rigidity, the car's entire upper structure from the seatbacks rearward is a second composite tub that's bonded to the passenger MonoCell "like an Easter Egg," Thomson said. He's extremely pumped about it. "It's amazing. One of my proudest technical achievements on the car. It's pretty, pretty awesome."

Tucking the 4.0-liter twin-turbo V8 under the luggage compartment presented another challenge: how to keep the former from cooking the latter. The solution is a fast-moving blanket of air channeled from the side intakes aft of the doors through an inch-high gap between the top exhaust and the layers of insulating foam and aluminum beneath the cabin. Check out the video below to learn more:

In the passenger area, McLaren's vision of a luxurious grand tourer is decidedly modern and self-possessed. Every Macca features a cleanly sculpted cabin anchored by a portrait-oriented infotainment screen and a duet of drive mode dials, and the GT is no exception. That's to a fault if you're looking for a luxe, cushy space in a car that starts at $210,000 before destination. There are more soft touch points and far less exposed carbon fiber than in its other cars, but McLaren is upfront that there's a limit to how much traditional luxury they can throw at the car before the lightweighting plot gets lost. So options like a 12-speaker, 1,200-watt Bowers + Wilkins stereo and cashmere interior are in, while ventilated and massaging seats are out.

Besides, in McLaren's nerdy mind, the material science advancements brought to bear here are the real luxuries. That includes a new spill-and-tear-resistant "Super Fabric" to line the cargo bay, and fanatical attention to blocking as much outside noise and exhaust frequencies with as little heavy insulating foam as possible. Thomson pointed to that last bit as we cruised along the hilltops above Saint Tropez at a good 60 mph. "We're having a totally normal, easy conversation right now." And if you're still looking for a little more zhuzh, McLaren will sell you a pricey custom luggage set to maximize the slender, 14.8-cubic-foot cargo bay.

The 2020 McLaren GT borrows the engine block and headers from the 720S, but new pistons, turbos, and exhaust components give the 612 hp, 4.0-liter V8 a torquey character all its own—and in conjunction with the 7-speed SSG (S for Seamless) transmission, a 0-60 mph time of just 3.1 seconds. Top speed is 203 mph, but as promised this GT is set up for more than straight-line fun with its hydraulic steering rack, gluey Pirelli P Zero tires, and active drive modes tied to engine response and the stiffness of the "proactive" suspension. The only question mark is the standard brake package: iron discs and four-piston calipers that don't convey a ton of confidence.

On paper, McLaren's got a winning remix to a classic formula. In practice, the 2020 McLaren GT is a rear-drive rocket just shy of a total package. To dispense with the obvious, it's fast as hell on straights and curves, spitting the same fire as the rest of the McLaren lineup. The balance that apex-smacking nature and the inherent softness required of a GT is managed through the aforementioned Proactive Damping Control suspension found on McLaren's upper-line cars; an array of sensors "reads" the road ahead to pre-adjust the damping rather than simply reacting to inputs.

In a car like the 720S, it's working to maximize grip. In the McLaren GT, especially in Comfort mode, it's tuned to be as soft as possible while still preserving a modicum of performance. The system works as advertised to deliver a Citroen-smooth ride over shattered French country roads, though it does allow more body roll and overall wallowing than we're used to in a McLaren. But that's why Track mode exists. In any setting, the hydraulic steering rack was a pêche from Saint Tropez up the twisty Route Napoleon and back down into Cannes, swift and direct but pleasantly low-effort. You could absolutely cross a continent in comfort in the McLaren GT; it's a truly unique blend of performance, comfort, and capacity in an unsuspecting form.

Still, Thomson was honest that McLaren had to get comfortable with getting comfortable ("We know how to define a Senna. It's like, easy. But we had to push ourselves here."). It just hasn't been part of the company DNA, and that inexperience pops up in a few rough spots. The transmission can be clunky when left to its own devices at lower speeds, exactly the time you'd want to sit back and let the computer do the work. Turbo lag is prevalent. The flatter torque curve smooths out the throttle response but doesn't quite deliver the same pitchy excitement of its other cars. And those standard brakes—they may signal the car's true intentions, but they're too weak for its dormant volcano of a powertrain. The acrid smell that lingers after a spirited mountain run kind of spoils your triumphant arrival at the valet stand at your waterfront luxury hotel. Ask us how we know.

So what does it mean for a company like McLaren to build something completely new like the GT? It has the dueling benefit and handicap of never having done a grand tourer before. That tension is expressed in the decision to keep the engine in the middle and throw out a century of established ideas about what a GT car should be, in the tricky marriage being forced between long distance comfort and dynamic performance. The McLaren GT is the way it is because there is no other way for McLaren. It must be a driver's car first—and that it is. Whether or not it's the best grand tourer depends on how much of a premium you put on comfort. But it's certainly the most entertaining.

McLaren's not building an SUV. But the McLaren GT shows that it understands the need for something calmer, fancier, and a bit more approachable in its frantic lineup. That is, if the company is to stay on track with its ambitious $1.5 billion Track25 development plan, which promises 18 new cars or variations by 2025. McLaren's spent the first decade of its new lease on life showing the world it knows how to do performance. Now it's time to show us something else, to channel its best impulses in unfamiliar ways. You get the feeling the GT is just the beginning.