McLaren's supercar mixes it up with Michigan football and Pope Francis in Italy's capital. 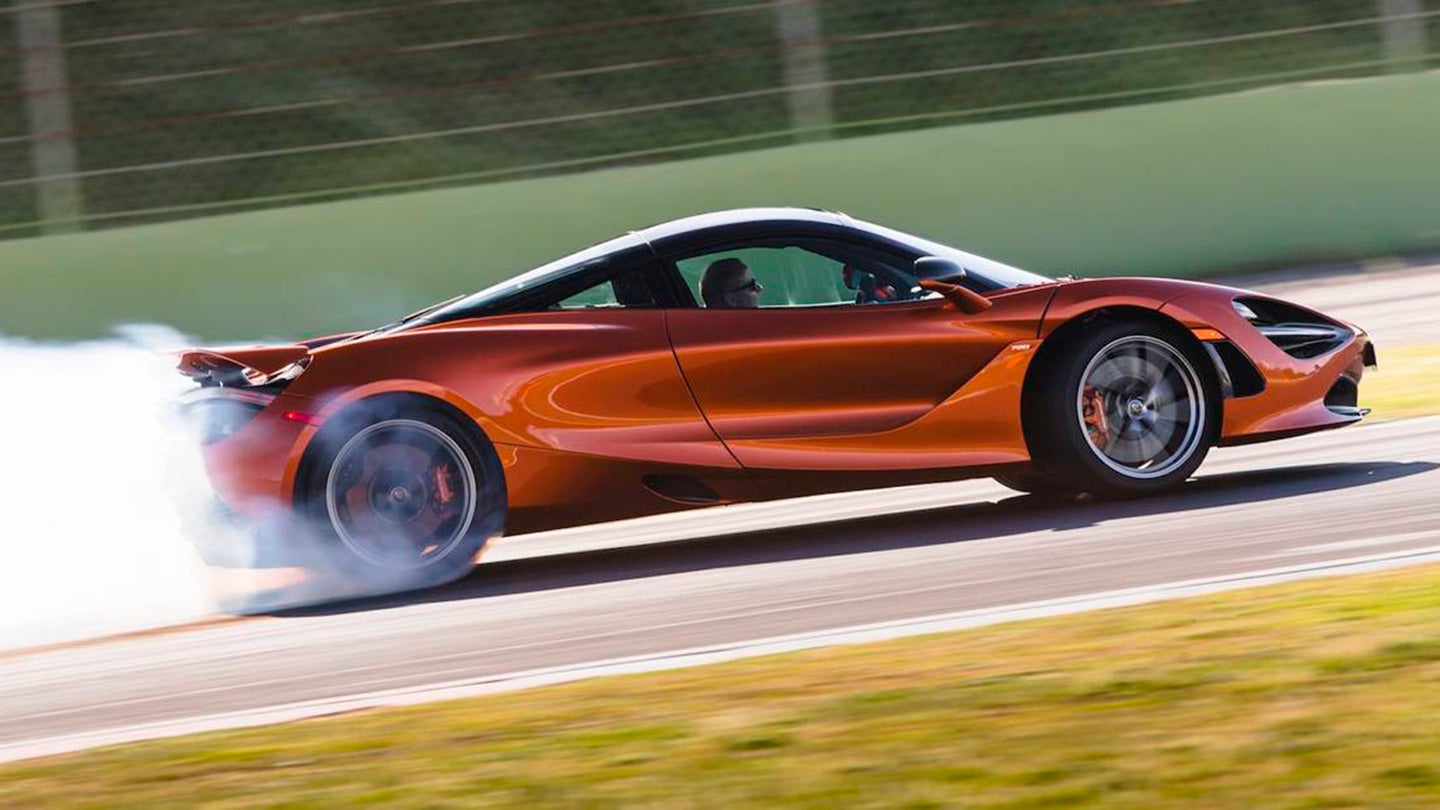 I'm still tingling as I write this, having just driven the spectacular, $288,475 McLaren 720S back into the pits at Autodromo Vallelunga, the high-speed Italian circuit that hosted the Rome Grand Prix back in the Sixties.  But I’m not sure I can use the word “spectacular.” You see, McLaren made us promise to refrain from publishing driving impressions for a few more days, until other journalists get their own stints behind the wheel. So mi scusi, but do check back on Wednesday, May 3 for an in-depth, foot-to-floor review of the 720S.  Until then, here are my seven first impressions—minus driving impressions—of McLaren’s new 212-mph supercar, which replaces the 650S.

1. Hail to the Victors

Muscled Michigan players snapped shots of the 720S. McLaren was scrambling to get Harbaugh behind the wheel of the 720S for a sure-to-be-viral moment. And local Italians had no clue whatsoever what a huge, unprecedented deal this was in the billion-dollar, media-saturated business of American college sports. One perpexed hotel clerk asked me, "So, they're like the junior boys' team in your local town?"

Um, something like that: On Sunday, Pope Francis himself will baptize Harbaugh’s infant son John Paul at the Vatican, presumably making him the blessed starting QB for the Wolverine Class of 2035. Michigan’s equipment manager showed me photos of the papal gifts given to Francis Thursday: A Michigan helmet adorned with #266 to honor history's 266th pope, and retro maize-and-blue Air Jordan 5 sneakers—a collector's item from a school Orange Bowl appearance—in Pope Francis's size, of course.

Similar to Harbaugh’s now-habitual tweaking of the stodgy NCAA, it wasn’t hard to see McLaren’s own triumphant Rome tour as a kind of British wink-wink, or maybe an outright “screw you,” to the Italian supercar establishment of Ferrari and Lamborghini. McLaren executives flatly denied this, but they were smiling when they said it. Then I drove the 720S through a picturesque Italian hilltop village, where a flock of charming schoolchildren ran into the street, shouting, to snap cell phone photos of the McLaren. I stopped smack in the middle of the lane and let them photograph to their hearts content, while cars lined up behind me. Not one person honked, but more than one older bystander tipped their caps to the McLaren. Conquering heroes, indeed.

2. It’s the prettiest McLaren yet

Stepping onto a carbon-fiber limb, I’d say the 720S looks better than the legendary F1, and better even than the seven-figure P1 hypercar. The P1 appears alien and imposing, but the 720S carries itself more like a real road car, and it’s a distinctive visual rival to the likes of Ferrari and Lamborghini. Highlighting its formidable active aero functions, that sexy, slippery design is also a worthy building block for multiple McLarens to come.

3.  McLaren (finally) has a hit soundtrack on its hands

A stickler might say this is a “driving impression,” but I beg to differ: The 720S sounds lusty and expensive even when it’s standing still. Thank a “Loud Start” function that, when you hit the Engine Start button in selectable Track mode, cuts the twin-turbo V8’s ignition spark and squirts some unburned fuel out the exhaust valves.

“Instead of lighting the fuel in the combustion chamber, you’re lighting it in the exhaust,” says Ian Howshall, product manager for these Super Series models. The result is a proper burp-and-bark that will wow bystanders or enrage snivelers.

4. Let There Be Light

Whether it’s darting scooters in Rome or bike messengers in Manhattan, the McLaren lets you spot looming danger better than any mid-engine competitor, thanks to outward views inspired by a jet fighter's canopy. The latest iteration of McLaren’s F1-based, carbon-fiber Monocell allows incredibly slender roof pillars. Naked carbon fiber forms the windshield A-pillars. Ogle the McLaren from the back—destined to be a regular occurrence—and the unbroken expanse of glass can fool you into thinking there are no rear pillars at all. Ah, but there they are, a glazed pair as skinny as a Milan model’s forearms, disguised below the tinted glass.

5. Three Coins in the Fountain

Let’s raise a glass to McLaren’s health, a company whose expansion into a successful road-car manufacturer was by no means assured. McLaren was formed as a racing builder in 1963, but McLaren Automotive wasn’t spun off until 2010. Just seven years later, McLaren is on track to sell about 4,000 cars this year, after moving 3,200 in 2016—a 99-percent jump from 2015. After founding its first retail shop in central London, the growing company now has 80 stores in 30 markets, including about a dozen in China, with plans to top out around 100 locations. The company has already taken 1,400 deposits on the 720S, meaning the first year of production is “oversubscribed,” a fancy word for “sold out.”  Wisely, 30 percent of company profits are being plowed back into R&D and products. The £1 billion Track22 investment plan envisions 15 all-new models or variants by 2022, including the 720S. McLaren vows it won’t ever build a crossover SUV—we’ll see about that—but it does promise that half its cars will feature hybrid electric powertrains by 2022.

Combine a 710-horsepower, 4.0-liter twin-turbo V8 with the lightest curb weight in the class—including the bulkier Ford GT—and you’ve got one shrieking-fast supercar. The base model 720S boasts a dry weight of just 2,828 pounds, which rises to a DIN curb weight of 3,128 pounds for our Luxury model, topped with fluids and  a 90-percent-full tank of gasoline. With performance checked off, the 720S gives owners and passengers more excuses to test it, with its supple, adjustable Proactive Chassis Control suspension and generous cargo space. There’s no glovebox, but the 720S adopts the sleekly trimmed rear Luggage Deck from the more-affordable 570GT model. Add a surprisingly large frunk below the hood, roughly the size of a Porsche 911’s, and you’ve got nearly 13 cubic feet of cargo space.

Until I can publicly parse the subjective performance behind the McLaren’s specs, try these numbers on for size: 0-60 mph in 2.8 seconds (0-100 kph, or 0-62 mph, is 0.1-seconds slower), 0-124 mph in 7.8 seconds, and 0-186 mph in 21.2 seconds. The latter, license-shredding acceleration figure is four seconds faster than the departing 650S.  McLaren says that, fitted with standard Pirelli P Zero street tires, the 720S will circle many racetracks faster than the 650S did with Pirelli P Zero Corsa track rubber. Those stickier, faster-wearing Corsa tires will be a no-cost option on the 720S, so let your imagination run wild.