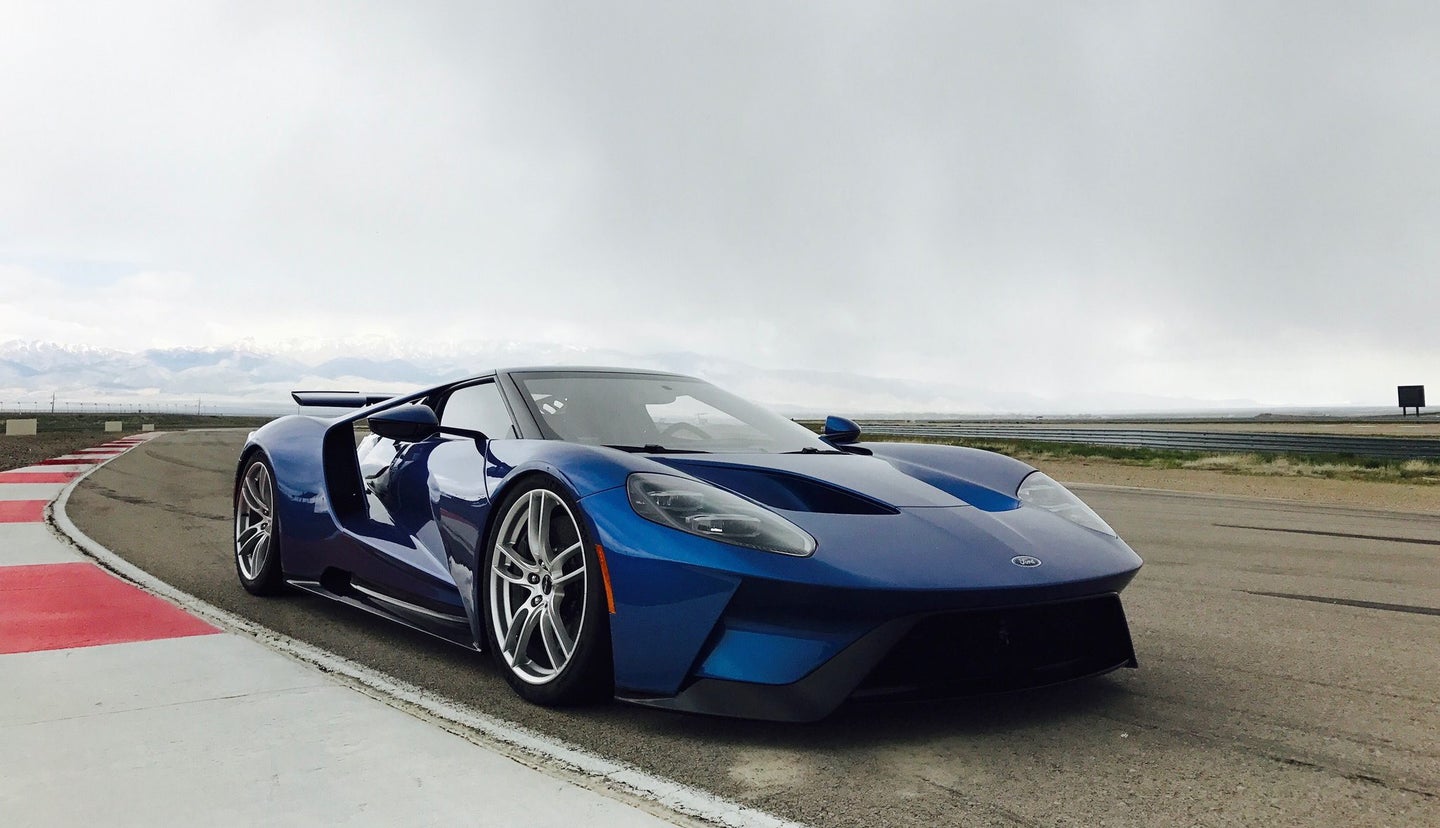 Car guys can be heroically annoying. They want to tell you all about the machinery they have manhandled, as if this is supposed to impress you. I apologize upfront: I am going to do some bragging. I have driven a lot of Ford GTs—old ones, new ones, even a spot-on replica of the 1966 GT that won Le Mans in 1966 (the actual car is worth $30 million). I also recently became one of a small group of journalists invited to drive the new generation Ford GT, on road and track in the rugged desert of Utah. The point of all this, besides me bragging? I have come to the conclusion that one generation of the Ford GT road car is the greatest American supercar ever built.

Ford introduced the mid-engine, 40-inch tall GT at the New York Auto Show in April 1964. The New York Times called it a “Grand Touring Class racing car capable of 200 mph.” Two weeks later, the Ford Mustang went on sale (people today forget that the GT, or GT40 as it quickly became nicknamed, was built to be a marketing tool for Ford customer cars, specifically the Mustang). As we all know, the GT racing car went on to win Le Mans from 1966 to 1969, and remains the only American car to win Le Mans outright. But there was a road car too…seven of them, to be exact.

My road test in the 1960s-era GT road car (called the GT Mk III) was in the passenger seat, and Jay Leno was driving. He cracked plenty of jokes, but truth is, I wasn’t listening. I was thinking about the vehicle. Quick impressions: The car is tiny, the interior cramped, the heat intense. Getting in the thing requires yoga mastery, and on the road, it squeaked and moaned like an osteoporosis patient. It’s an intense feeling to be on the road in a 1960s-era Ford GT. Yet, when you compare this auto to a modern supercar, it can only show itself to be what it is: an antique. The 289 V8 only pumps out 306 horsepower, the rough equivalent of a Nissan Maxima today.

Many of us can remember the excitement of laying eyes on this generation Ford GT for the first time. It was dreamed up to be a part of Ford’s centennial extravaganza. It also supported an all-new Ford Mustang, which appeared the same model year. The vehicle had just enough of the original GT’s DNA with plenty of modern ass-kicking ability and a body so aggressive looking, it had all the aura of a machine gun bullet. By the numbers: 550-horsepower supercharged V8 located just aft of the cockpit, zero to 60 in 3.4 seconds, 205 mph top speed. A total of 2,022 were built over two years, according to Ford, the most popular colors being red (765), white (504), and blue (265).

I will admit that the fastest I have ever motored on a public road was in a 2005 Ford GT, on I-80 slicing through the Nevada desert. I can’t admit the speed as I would get myself thrown in jail, but suffice to say it was fast enough to make my eyes feel like vacuum cleaners sucking in the horizon with brutal force. I blew out the clutch on the car, but not before I gathered some strong driving impressions. Of course the car was monstrously fast but it also cornered with ability (no traction control). And frankly, its physical beauty and its great big balls made it unlike any other car I had driven, up to that time.

When it first went on sale, this car cost under $150,000. Today, excellent examples will fetch twice that. There’s a reason: It’s a beauty and a beast. I drove three of these vehicles back in the 2000s, and I remember thinking that this was the greatest American supercar ever built. And it was, until…

This car shocked the motoring world when it appeared at the January 2015 Detroit auto show. Most employees of Ford didn’t even know it existed; the car had been designed in secret in a basement skunkworks in Dearborn. A road car and a race car were developed simultaneously, and as we now know, the race car made history when it won Le Mans in class in its debut last year—on the 50th anniversary of the original Ford GT’s first victory at Le Mans, in 1966. This story almost feels too good to be true, and it would be, if in fact the road car did not live up to the race car’s reputation.

Two weeks ago, I got to drive the new GT road car on road and track. It was one of the first off the assembly line. Ford designers set three goals for the looks of the car: 1) It had to have key design elements of the original 1960s GT. 2) It needed performance efficiency (ie, aerodynamics). 3) It had to have what Ford calls “modern seduction.” In other words, it had to be smoking hot and like nothing else ever designed. Now look at it: Does it come through on all three? I say yes.

Out on the track, this car fulfilled its basic promise. It’s a monstrously powerful supercar that you can climb into and immediately have a roaring good time while feeling safe. It’s not twitchy, or nerve-tangling. There is no Viper death-trap sensation. You can put a lot of that horsepower to the pavement confidently, right off the bat. The design and engineering are brilliant: a carbon-fiber tub with a roll-cage built into the body so you don’t notice it; a steering wheel that has all the buttons and toggles needed so you can control all aspects of driving and interior comfort while keeping your hands firmly planted where they need to be; a fixed driver’s seat that’s a structural element, with adjustable pedals and steering wheel.

The dashboard is not a glued-on plastic thing; it is a structural element of the car. The ride height adjusts 50 millimeters at the touch of a button. The rear wing deploys when you need it, and tucks in when you don’t. Intercoolers are built into the flanks of the car and they send cool air into the engine compartment through those wild-looking buttresses (yes, they are functional, not just eye-candy).

Five drive modes configure the car instantly for your needs: Normal, Wet, Sport, Track, and V-Max. That last one is for pure straight line speed, so I did most of my driving on road and track in Track mode, which keeps a hint of the electronic stability control on, the ride height lowered, and the rear-wing deployed. If I had any criticism, it would be the transmission; shifts were not as crackling and lightning fast as Porsche’s PDK, but this distinction was so minor, I barely noticed it.

Never mind that this car will probably require mortgage-like payments just to maintain. It is an absolute blast. Sure, there’s major competition at this price-point. McClaren, Porsche, Ferrari, Lamborghini—take your pick. But none of those is American-made, none is the reigning Le Mans GTE Pro class champion, and none is quite so unique as the GT, a car that will surely hold its value and more, in the years to come. For all of these reasons, I cannot think of an American supercar that could match this one. The new GT is the all-American GOAT.