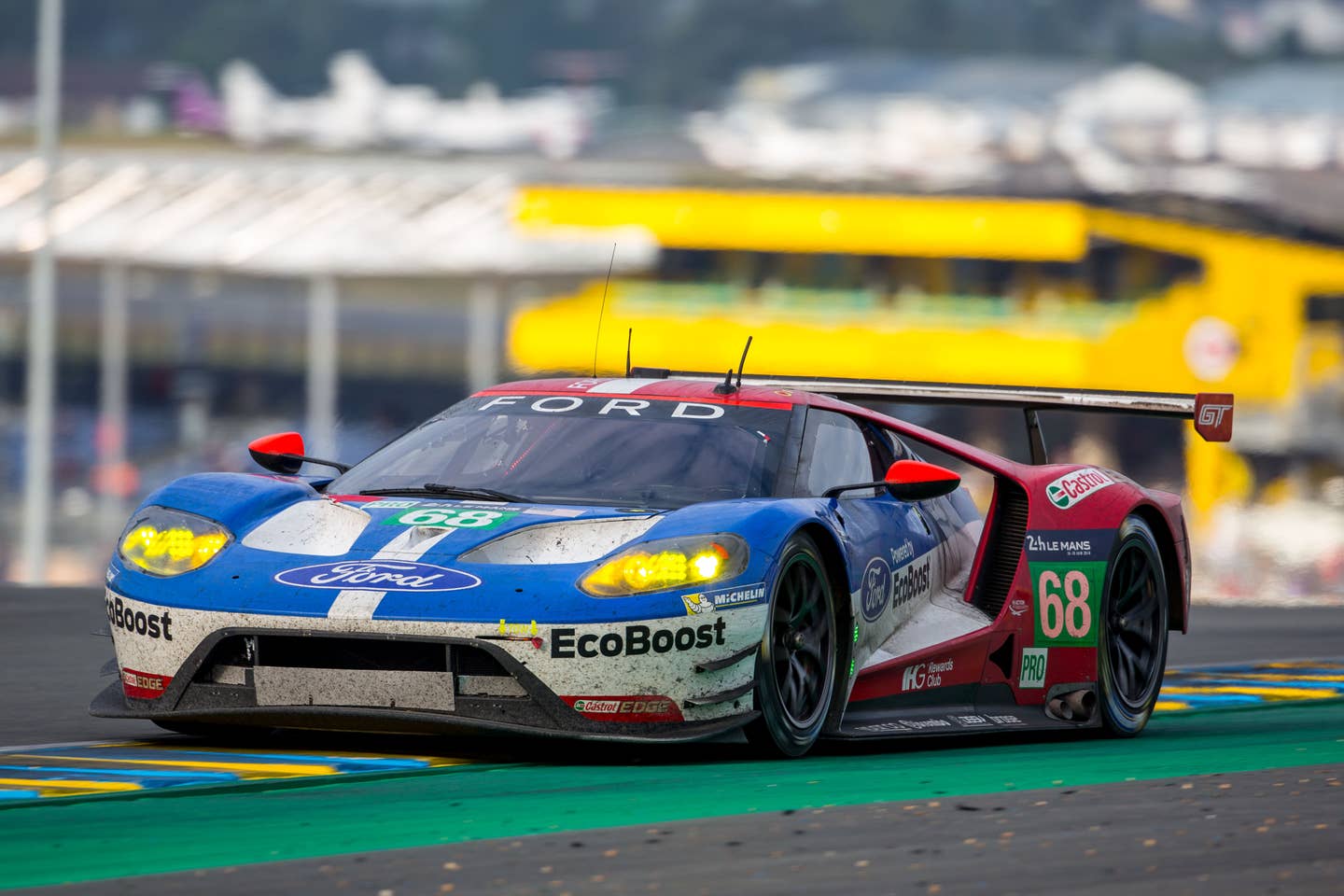 On the 50th anniversary of Ford Motor Company’s historic Le Mans victory in 1966, a Ford GT in the hands of Dirk Muller won the 24 Hours of Le Mans today, in the GT class. In a stunning finish that has shocked the motor racing world, a Porsche hybrid 919 won the race outright, following the mechanical failure of a leading Toyota hybrid, in the final five minutes of the marathon event. The grueling 24 hour race can be summed up in a word: staggering.

In the 84 times this race has been run—the most important motor race in the world—there has been few if any finishes as unexpected as this one.

Ford debuted its new GT racing car at Le Mans this year, with the Ford Chip Ganassi Racing team. In the GT class, four Ford cars competed against rivals Chevrolet Corvette and Ferrari. The Corvette team has won the 24 Hours of Le Mans in class eight times. Few experts picked the Ford to win against its seasoned foes in its debut, and the lack of pace from the Corvettes was certainly one of the race’s surprises. The winning #68 team of Muller (Germany), Joey Hand (USA), and Sebastien Bourdais (France) completed 340 laps, beating a Risi Competizione Ferrari after a back and forth dice that lasted the full 24 hours. No doubt, Ganassi must have whittled his finger nails to stumps in the final few laps, as Dirk Muller, who put the Ford GT on pole, brought the car safely home, with a Ferrari driven by Giancarlo Fisichella on the same lap not far behind.

Ford’s return to Le Mans after half a century celebrates the Ford versus Ferrari rivalry that formed the golden age of racing in the 1960s. Ford won Le Mans outright each year from 1966 to 1969. No other American manufacturer has ever won it. This year, the Fords brought the speed from the start, the pace surprising after unsuccessful turns at the Rolex 24 and the 12 Hours of Sebring. The question was, would the cars hold up for the full 24 hours? Chip Ganassi—the team’s coach and captain, playing the role Carroll Shelby played in the 1960s—told this reporter just days before the race: “There’s only one goal. Winning.” Ganassi, a team owner who has had great success in Nascar, IndyCar, and IMSA, had never fielded a team at Le Mans before.

In the LMP1 class, Toyota appeared destined to win this race, having led it for most of the 24 hours. Toyota has attempted to capture Le Mans victory for the past few years and has finished second (2013) and third (2014). It is the race all the manufacturers desire to win the most, and this year, it appeared the Japanese manufacturer would finally win. A prototype team of this type requires a budget somewhere around 300 million Euros, and that investment must in the end boil down to a single man in a car, racing at speeds upwards of 200 mph, around the clock. With less than five minutes to go, a Toyota hybrid in the hands of Kazuki Nakajima, well in the lead, suddenly lost power, handing the race over to the Porsche team of Neel Jani (Switzerland), Romain Dumas (France), and Marc Lieb (Germany). The scene in the Porsche pit was suddenly mayhem, as the Porsche 919 hybrid coasted to victory. A Toyota hybrid finished second, while an Audi R18 hybrid claimed third.

A 24 hour car competition can have its dull moments, but not this year. The racing in both the top prototype and GT classes was tight, with frequent lead changes and all out speed. Ford’s success in its debut will surely lure more eyes to its campaigns in IMSA and the World Endurance Championship, and already, fans are wondering in the social media sphere if Ford can pull off this victory again next year. Go here for the complete 2016 results.