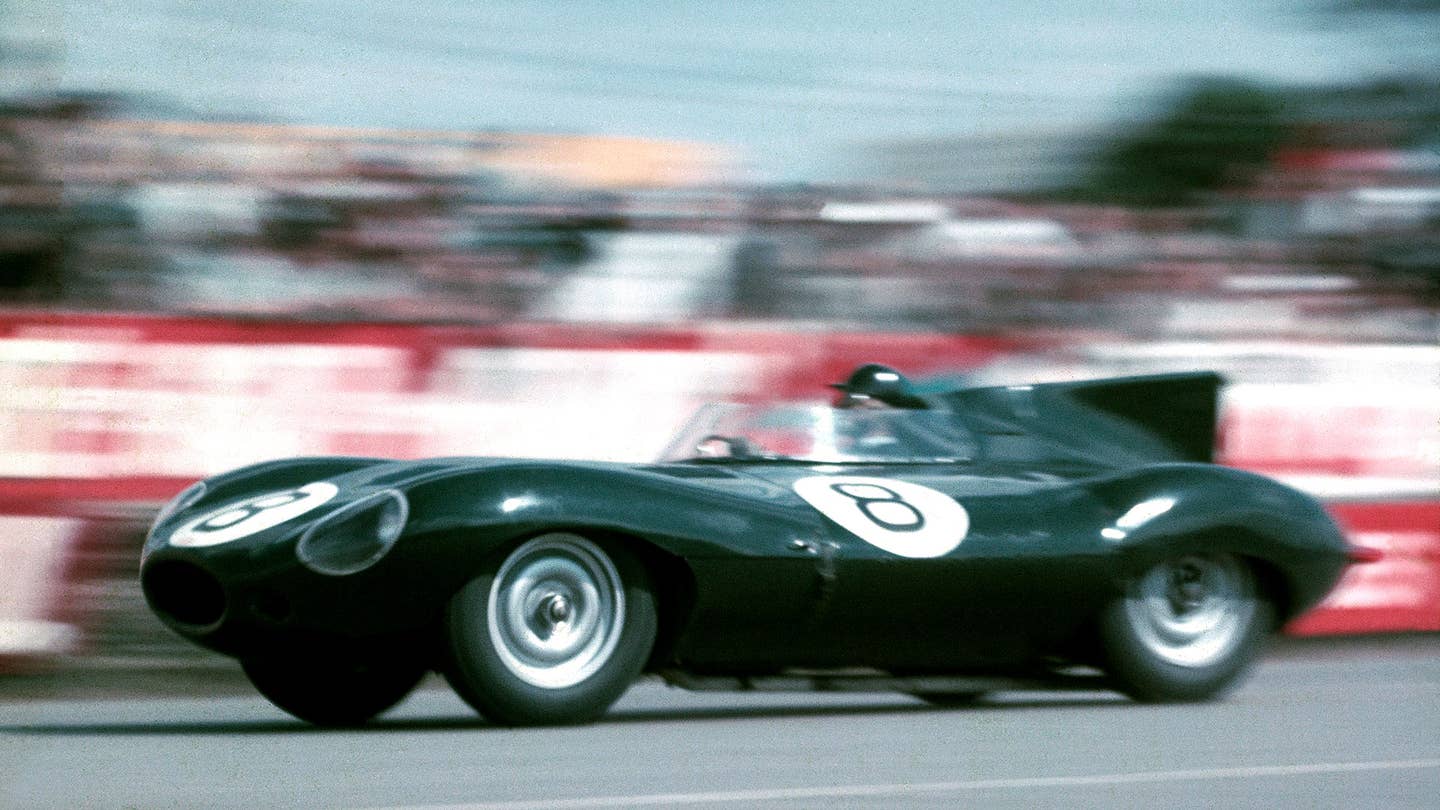 Le Mans is the most grueling test of man and machine on earth. But it’s also a spectacle. Nowhere else will you find such beautiful machines traveling so fast. On the eve of this year’s running of the 24-hour classic, we look back at the eight most stunning cars ever to roll down the Mulsanne.

Numerous publications have named the 956—and its successor the 962—as the greatest racing sports car of all time. It’s tough to argue otherwise, considering the 956/962’s 120 checkered flags over a 13-year span. The Rothmans car that won Le Mans in 1983 strikes us as the most striking of the bunch, and according to Gooding & Company, the auction company that sold the winning car last year, it’s also the most successful of all the 956s. Its tail seems to go on forever, making the car look like it’s taking flight, even when it’s standing still. This in-car footage of Derek Bell in a Rothmans 956 will blow your mind.

The great American driver Phil Hill will eternally be linked to this blood red racing car. Hill became the first American to win Le Mans in this machine, in 1958, a heroic drive in which he motored at times flat out in pouring rain in the open cockpit, in the pitch black of night. On June 22, at 4 pm, Hill took the checkered flag and drove a historic victory lap in the car, with his teammate, Belgian Olivier Gendebien, sitting on the hood. The fans knew that, with an American champion crowned at Europe’s most important motor race, American cars couldn’t be far behind. This Testa Rossa (“red head” in Italian) is still considered today one of the all-time most beautiful Ferraris. No wonder Ralph Lauren has one in his famed collection. He’s even selling a toy one—for $9,500.

Bentley was the first manufacturer to claim a Le Mans dynasty, winning each year from 1927-1930. It has often been said that those victories cemented a reputation Bentley used to hawk cars all over the globe, and if it were not for those checkered flags, Bentley probably wouldn’t even exist today. The Speed 8—an homage to the Speed 6 that won in 1929 and 1930—was an eight-cylinder ass-kicker in British racing green. It ushered Bentley back into racing after an absence of 73 years, and looked great doing it. The 217-mph car debuted at Le Mans in 2001, and it won in 2003.

It’s red, white, and blue, and American as all hell—even if this car was assembled in Canada. The new Ford GT race car will debut this weekend to celebrate the company’s return to Le Mans on the 50th anniversary of its historic 1966 Le Mans win. As Chip Ganassi, who will head up the Ford Chip Ganassi Racing team this weekend, told me in a recent interview, regarding the first time he laid eyes on this car: “I was amazed. My immediate thoughts were, this is clearly the grandson of the GT40. It had all the lines of the GT40. It looked updated according to current aerodynamics. But it still had that same character. You could tell instantly it was a relative of that car.” If you don’t know what the GT40 is, keep reading.

The deadliest accident in motor racing history occurred at Le Mans in 1955, with somewhere around 85 spectators killed (there has never been a definitive number). Bizarre but true: The #6 Jag D-Type won that race set an all-time speed record over 24 hours. One could argue that this race, the death toll aside, was the most beautiful ever at Le Mans, with the D-Type competing against the Mercedes-Benz 300 SLR, a host of red hot Ferraris, and Aston Martin’s DB3. But the Jag takes this race—in both beauty and speed. It had a shark-like dorsal fin on the rear deck and gorgeous feminine curves over the front wheel wells, all of it enticing in rich, deep British racing green. A D-Type won again in 1956 and 1957.

Some readers will go ballistic over the lack of the Steve McQueen era Gulf 917. But we have chosen another 917 on this list, instead. The week before Le Mans in 1970, designer Anatole “Tony” Lapine set to work creating a unique color scheme for this Martini Racing Porsche. Some 1,500 cans of spray paint were required to finish the job. Indeed, this psychedelic beauty looked like a hallucination when it rocketed past fans at well over 200 mph. Porsche won its first Le Mans that year with a 917. Though the Hippie Car didn’t win the race, fans dug it so much, Porsche followed up a year later with more striking livery—the famed Pink Pig.

The GT40 is arguably the most important American racecar ever built, and it came in numerous iterations. The most beautiful of them all won the race in ’68 and ’69—the GT40 MkI in Gulf racing livery. (The same car, miraculously, won the race two years in a row.) The now famous Gulf livery debuted on Ford’s racing GTs in 1968, and the combination of the powder blue and marigold orange paint, with the car’s already stunning profile, was enough to land it in second place on this list. Catch it in action in this terrific bit of footage here. What could possibly be more beautiful than the Gulf liveried GT40?

If ever a racing car appeared to be as much sculpture as machine, this would be the one. There is no square inch of this car that is static. Everywhere the eye focuses, the body of the car is in movement, the shape changing. The car is in essence similar to Ferrari’s racing sports car from the year before (the 330 P3), with the exception of more tantalizing, spoked wheels. The body was designed by a coach builder named Drogo. Very few of these cars were ever built. I saw one myself once in the classic car shop at the Ferrari factory in Maranello, Italy; on the wall was a life-size image of three of these cars crossing the finish line together, taking the checkered flag, at the car’s debut race—the 1967 24 Hours of Daytona. (See that exact image here) Never before, and never since, has a car left me so entranced. It was—and is—quite literally breathtaking. The car placed second at Le Mans in 1967, its only appearance at the Circuit de la Sarthe.