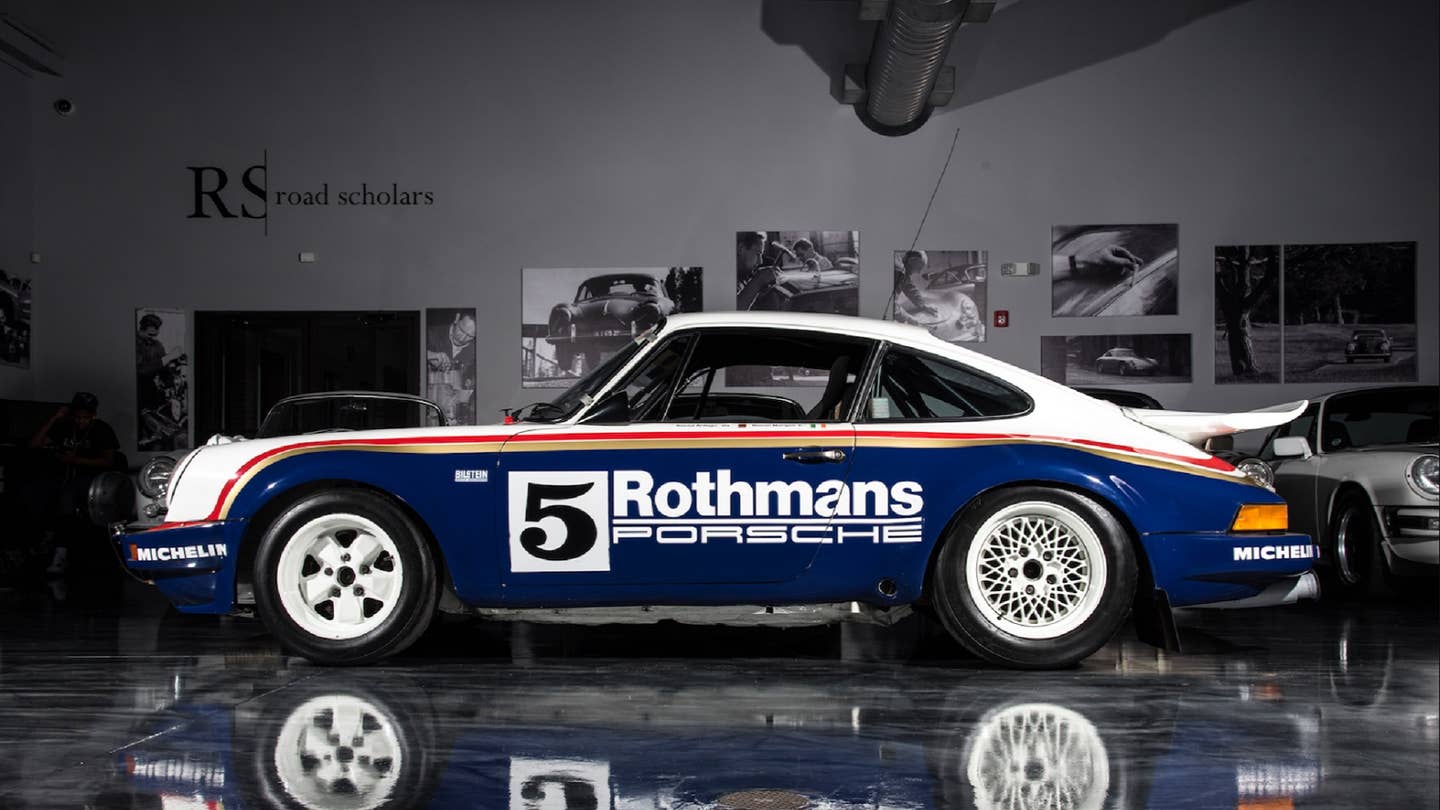 In the late 1970s, Porsche, and more specifically Helmuth Bott, had a desire to display the car's versatility in multiple motorsport disciplines. Rallying showed off the car's innate abilities to endure and overcome many an obstacle. Concurrently, Porsche had teamed up with the Rothmans cigarette brand as a title sponsor of their sports car circuit racing efforts, which had been nothing but a resounding success on all fronts. Rothmans 956s won overall at Le Mans in 1982 and 1983, you'll remember. When the FIA introduced a rally raid championship to run through much of Europe and the Middle East to debut in 1984, Porsche knew they had their chance to show off what their sports car could do off road, while Rothmans had great interest in expanding into those Middle Eastern markets.

The new 3.2 liter Carrera was launching in 1984, but Porsche had not built enough of the larger engined cars at that point to gain homologation status, so they were forced to build 20 RS models from their outgoing 3 liter SC platform to fit the FIA's "Group B" classification. Porsche then teamed with a brand new rallying team called "David Richards Autosports" (which would go on to become what we now know as Prodrive), sending them six of these street legal terrors to be converted to pure racing specification. The basic SC/RS used a 911 Turbo chassis and suspension fitted with lightweight body panels and lexan "glass" everywhere but the windshield. Suspension was given helper springs to aid the torsion bars, and 18mm sway bars were added at either end.

The engines were only lightly modified with larger camshaft profiles, a simplified mechanical fuel injection, and 935 cylinder heads, bumping power up to 255 horses from the stock 204. With the power bump and the huge weight loss, the cars managed to sprint to sixty in just 5 seconds instead of the 6.8 seconds needed for a standard series-production SC. These beautiful cars are among the rarest Porsches ever built, and the one for sale here (available through Road Scholars in the Carolinas) is one of the original six David Richards cars. Richards took the cars from Porsche and further modified them with strengthened A-pillars, bulkhead, and trailing arms. This SC/RS, chassis #110-008, participated in 13 international rallies for Porsche and the Rothmans team. Five of those rallies resulted in 008 taking the victory. The car was driven by legendary sports personalities including Henri Toivonen, Juha Kankkunen, Saeed Al Hajiri. In the 1984 season, this car won the Belgium round and the Portugal round of the championship. In 1985 the car won the Jordan rally. 1986 saw the car finish well in Greece and the Netherlands, but no outright victories. For 1987, however, still soldiering on after four years of grueling competition, #008 won the FIA Middle East Rally Championship with a pair of victories in Kuwait and Qatar, and a second overall at the Jordan rally.

Since it was retired from racing, the car has been cared for and well documented by Porsche fanatics the likes of Prescott Kelly and Peter Kitchak. Road Scholars present this car as possibly the most significant of the 20 SC/RS series. If you're looking for significant Porsches to add to a collection, perhaps you need to be dialing the number for Road Scholars.

You can see more photos and read more on the car's history on roadscholars.com.