When you’ve done it all, bow out gracefully. 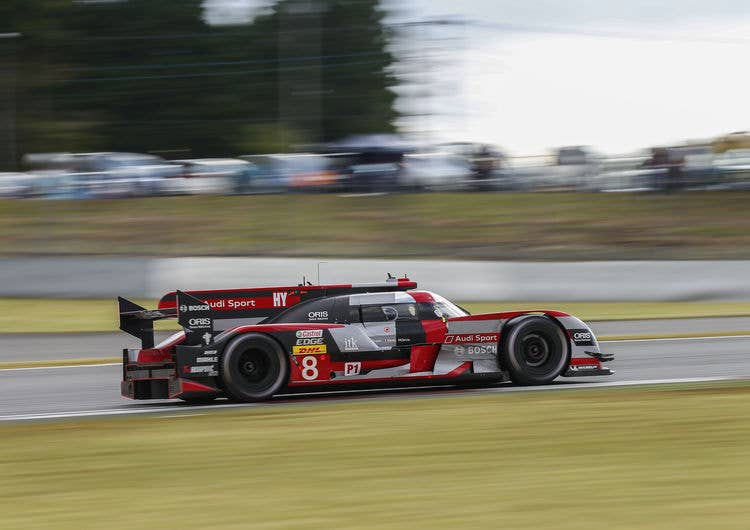 The 24 Hours of Le Mans, vintage 1999, was inarguably the most important one in the past 25 years. It was regarded as something of a disaster then, and it was, but the next decade proved the resiliency of big-time endurance racing.

BMW was there, with its new V12-powered open-cockpit car. Toyota was back with three closed-cockpit GT-Ones. Nissan and Panoz both showed up with new topless entries. There were multiple privateers entered in Prototype, including Pescarolo’s Porsche-powered Courage, and the Konrad and Kremer cars, both Ford-powered Lolas.

But the big news was the arrival of the long-awaited Mercedes AMG closed-cockpit CLRs. Sleek and fast with a 5.7-liter V8, the CLRs – with a pool of drivers that included Nick Heidfeld, Peter Dumbreck, Bernd Schneider and Mark Webber – they were top contenders in most pre-race handicapping.

Rolling in under the radar, though, were four new factory Audi entries, two R8R roadsters and two R8C coupes, all with 3.6-liter turbo V8s.

Twenty-eight of the 48 cars on the entry list were LMP or LMPGT entries. The rest were GTS and GT cars, mostly Porsches and Dodge Vipers.

Even casual fans no doubt remember the headline story: The Mercedes cars were pulled from competition because of their tendency to become airborne. It happened to Webber in practice, and Mercedes thought the problem was fixed by tacked-on winglets. It was not. Webber flipped in the race, followed by Dumbreck, who sailed into the trees like a Frisbee.

Mercedes immediately halted its efforts and essentially disappeared from the track – a bit of a problems for the handful of journalists who had come there with Mercedes to witness its glorious return to endurance competition, including me. The Mercedes CLRs never raced again.

The race itself turned out to be a genuine nail-biter between BMW and Toyota. BMW dominated, but late-race problems opened a window for Toyota, and despite having such top drivers as Thierry Boutsen, Martin Brundle and Allan McNish on the roster, it was the all-Japanese team that ended up just one lap down to the number 15 BMW, with Ukyo Katayama setting the fastest lap of the race as he came to within one minute of the BMW when a tire failed, resigning the Toyota to second.

And suddenly, they were gone. Toyota left the series. BMW left. Nissan left. Mercedes was gone.

The only factory team to come back to Prototype in 2000 was Audi. All four of their cars had multiple problems in 1999, especially transmissions, but the two roadsters had fought back to finish third and fourth, though the fourth-place car was 19 laps down. Audi had arrived prepared, with an enormous crew and inventory of spare parts. From the drop of the green flag, they looked like they knew what they were doing.

And when they came back in 2000, Audi Sport Team Joest R8s finished first, second and third. Fourth was a Pescarolo entry, a Peugeot-powered Courage, that was 24 laps behind. The Audis beat a depleted field, yes, but it was the beginning of a dynasty. A dynasty that ends this season.

The 2000 race was the first for Corvette Racing, which turned out to be important, and for Cadillac’s two-car Northstar LMP team, which was not. In 1999, Cadillac and Corvette showed up at Le Mans to announce their pending arrival, and to get the lay of the land.

I took a friend, a higher-ranking Cadillac executive, to tour the deserted Mercedes garages. They were completely carpeted. Tons, literally, of spares sat in trucks outside. The garages looked like miniature factories. I said, “Look at the investment Mercedes put into their new cars. And they flipped over! Is Cadillac really prepared to spend this kind of money to be competitive? Because if you aren’t, this whole thing could turn out to be a negative, not a positive.”

Which is, of course, what happened, and I was sorry I was right.

Audi was thinking long game, and many who have come and gone since were not. Peugeot even developed a winning car and a winning team, and with the cars in place at Sebring and the drivers en route for a test, the company pulled the plug with no warning.

Audi, at least, is giving it until the end of the season.

And it was the right decision.

Since that podium sweep in 2000, Audi has absolutely dominated endurance racing, and they’ve probably spent over $1 billion doing it, with another $200 million a year to stay on top. They are battling Toyota, which returned with a vengeance, and Porsche, which has done remarkably well with slightly fewer resources.

But Porsche and Audi both report to parent company Volkswagen. And VW legitimately screwed the pooch with its diesel disaster, unapologetically cheating multiple governments and millions of consumers with falsified emissions testing. And VW must pay. They are an enormously wealthy company, and you can count on the fact that Germany will provide whatever assistance is needed, but at the very least, VW must appear to be making sacrifices.

Such as Audi’s WEC endurance team. Which has done it all, but now must continue to invest enormously to just maintain its standing against Porsche and Toyota.

This, of course, doesn’t mean Audi is leaving motorpsorts. As a consolation prize, Audi Chairman of the Board of Management Rupert Stadler, who made the announcement that Audi was leaving the WEC, said the company was shifting its focus, and its money, to Formula E, where it will battle Jaguar and probably BMW and Mercedes and whoever else shows up.

And Audi has also discovered the wonderful world of GT3, where the company builds a race car, sells it for a half-million or so, and gets paid to provide support and parts and maybe factory drivers. A properly-run GT3 program can actually make money, which will keep Audi and the rest of the manufacturers in racing forever, as long as it remains profitable.

Meanwhile, there are two races left, including the next one, the Six Hours of Shanghai on November 6.

And as we saw in 1999 and 2000, the departure of a major player, or several major players, is survivable. In endurance racing, expect the unexpected – who would have thought Cadillac would be back in prototype racing in the IMSA WeatherTech series next year? And this time, I suspect they’ll be ready.