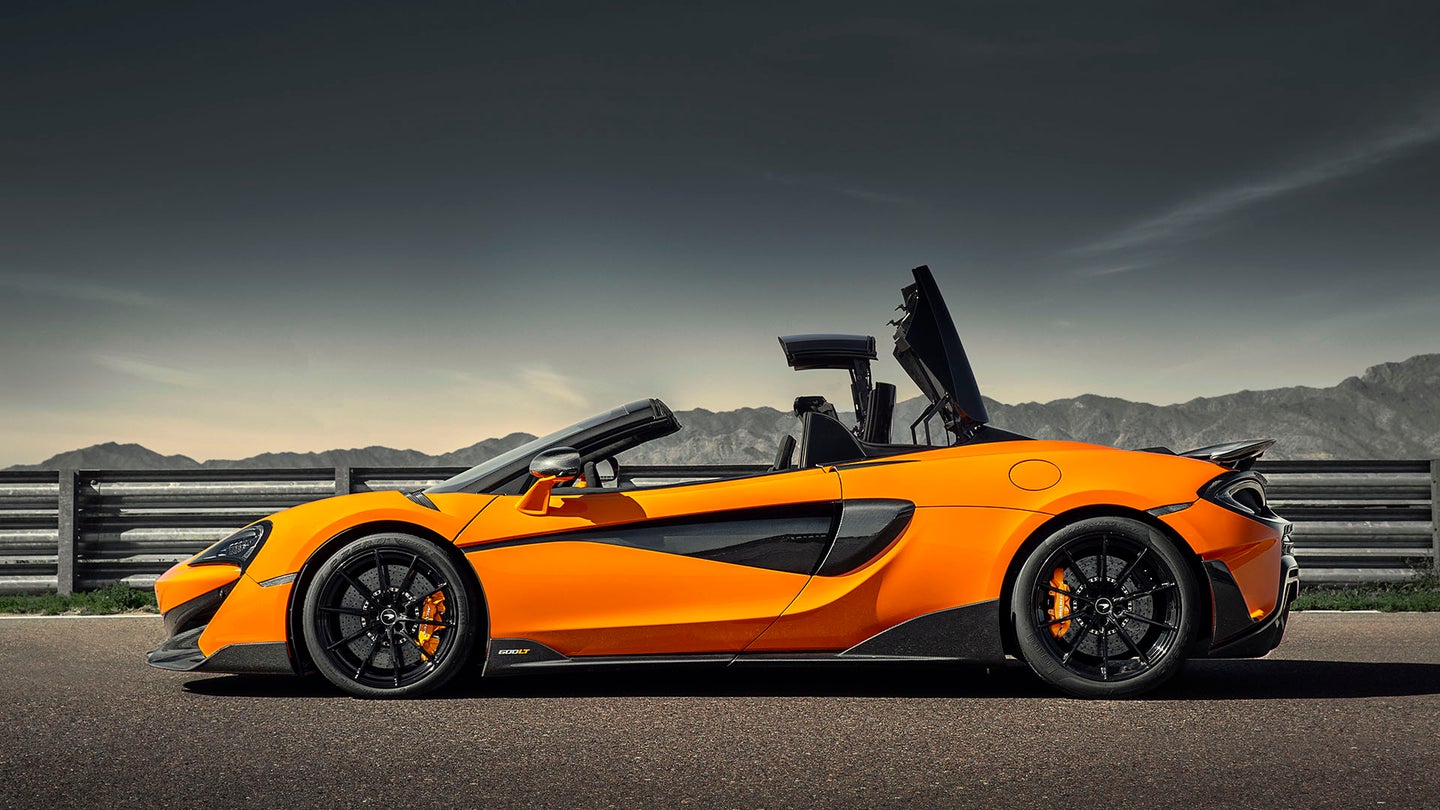 Supercar makers have come and gone over the past 25 years. But McLaren has cracked the code, riding its Formula One-championship rep and technical expertise to a record 4,806 global sales last year, a revealing 44 percent jump. And its the McLaren 600LT Spider that most vividly shows how the British babe of supercars has grown so strong, so quickly.

First, the 600LT offers yet another variant on the company’s most-affordable “Sports Series” models, which includes the 570S, 570 GT and 570S Spider. They all share that famed carbon-fiber monocoque, twin-turbo V8, and seven-speed, dual-clutch automatic transmission. Secondly, McLaren’s designs, once a bit indistinct, have become more alluring and recognizable. Function still largely dictates form, as you’d expect from the wonks of Woking, but those exotic assemblages have coalesced into a more-pleasing whole.

Marching on Maranello with the Wind in Your Hair

Coupe or convertible, the 600LT Spider now sits astride the Sports Series lineup, generating the highest performance, and naturally the highest profits. This restyled “Longtail” looks to trap wealthy track rats with enhanced power, handling, aerodynamics and limited-build status, to the point that buyers won’t flinch at a $259,350 base price—about $48,000 more than an entry-level 570S Spider.

The 600LT Spider boosts sensory overload with a retractable hardtop that opens or closes in 25 seconds and operates at speeds below 25 mph. The three-piece contraption adds just 110 pounds to the 600LT coupe, and requires no additional chassis bracing to keep things nice and stiff. (The claimed dry weight of 2,958 pounds is still 210 fewer than a 570S Spider).

Where the 570S and 570GT are the mink toothbrushes of the McLaren lineup, designed more for daily use, the 600LT has a sharper, more-professional focus. That was clear when I picked the McLaren up at Classic Car Club of Manhattan, spotted its bespoke-compound Pirelli P Zero Trofeo R tires, and immediately prayed for sunny weather. Those Trofeos are about as useful in the rain as a cotton-candy hoodie, and I was headed to Connecticut for an encore drive of seventh-generation Corvettes, including the 755-horsepower ZR1. The McLaren’s front aero splitter was also so low I imagined shredding it on every manhole cover or speed bump in Manhattan.

The capsule-like interior, while a mite boomy from road noise and whistling turbo wastegates—especially compared with the relatively quiet Corvette ZR1—also marked McLaren Automotive’s steady progress since its 2010 founding. The vague kit-car feel that hampered early models like the 12C is mostly banished, or covered in a rich tapestry of Alcantara. The dreaded, sludge-paced IRIS infotainment system was still aboard, whereas the spectacular 720S, which I first tested in Rome, has adopted a dramatically more modern and intuitive unit. And the McLaren’s rotary dashboard controls for its powertrain and dampers are still needlessly fussy, requiring you to activate the panel before dialing in your chosen set-up.

I’m sorry, does it sound like I’m complaining? Because those gripes aside, the 600LT is a supercar rave that supplies its own ecstasy. From its upswinging dihedral doors to its top-exit exhaust outlets, the smoky-gray McLaren had me rubbing my hands in anticipation of pure driving fury. Those hands were not disappointed, because the McLaren’s electrically assisted steering is so good, so feelsome that you might assume it’s a hydraulic unit. Commands from your brain and fingertips are translated into precise action, instantly. The Alcantara-wrapped steering wheel is meant for fast driving and nothing else: Three carbon-fiber spokes, backed by antenna-sized paddle shifters, and no extraneous buttons or widgets to spoil the vibe.

When I jumped from the McLaren straight into the ZR1, the Corvette’s steering felt as light and vague as a Lexus’ in comparison. And where most citizens barely gave the ‘Vette a glance, despite its overcompensating rear wing, the McLaren drove people apesh*t everywhere I went. I lost count of how many people gushed over the 600LT and asked for a supercar selfie, or the number of kids I let sit inside and rev the engine. Hey, it makes their day, and their Insta feed, so only a jerk would refuse.

Once I kicked daydreaming teens out of the shell-shaped, carbon-fiber racing buckets, a standard inheritance from the P1 hypercar (buyers can also choose “ultra-lightweight” carbon-fiber seats from the Senna) it was time to dance with the 600LT. The 3.8-liter mid-mounted V8 generates 592 horsepower, 30 more than a 570S, and 457 pound-feet of torque. Lighter, stiffer running gear from the 720S, including forged aluminum double wishbones, shaves 23 pounds from the standard 570S set-up. Adaptive dampers and front and rear anti-roll bars are also retuned. The suspension approaches the steely edge of what many street drivers would consider livable, without tripping all over it.

Like its 570 mates, the 600LT is capital-P “Playful,” ridiculously easy to drive at a searing pace. I’d love to recruit some grandmothers, give them a one-hour lesson, turn them loose in the 600LT—and then watch them get out of tickets with the rare sob story that jaded cops have yet to hear. Yet the 600LT is meaner and more buttoned-down than any 570, and without torturing your body and backside like the previous Longtail, the one-trick-pony 675LT.

In other words, it’s a real sports car, one that will set 0-60 mph aflame in 2.8 seconds. This being a featherweight, aerodynamically superior McLaren, higher velocities are where the 600LT really separates itself from a would-be supercar like the ZR1. To the Corvette’s defense, it’s a hairy freak show in its own charming way, and its roughly $130,000 as-tested price is a fraction of the McLaren’s. Still, there are reasons that the Corvette C8 has now adopted a mid-engine layout, and cars like the 600LT are among them. The Corvette ZR1 has 163 more horsepower than the 600LT, but it’s nearly two seconds slower to 124 mph (200 kph), at 10.3 seconds versus a ferocious 8.4 for the Macca. McLaren pegs top speed at 201 mph.

Following my return from Connecticut, I took my Brooklyn neighbor (and surfer girl) Danie for a refreshing, top-down spin. I didn’t realize she had no fear of speed as we rocked hilly parkways at an ever-higher pace, exploring the seemingly limitless grip of those Trofeo tires. Or maybe it was because, as Danie suggested, the McLaren always felt in complete control. (I still suspect that many shotgun riders would have been howling at me to slow down). When that time came, the carbon-ceramic brakes, straight from the Super Series and 720S, are simply brilliant; including a properly hard pedal and minimal travel before the onset of braking.

McLaren has also improved the mid-engine sound of its cars—nothing to make Ferrari or Lamborghini lose much sleep, but enough to make you enjoy crescendos to the 7,500-rpm peak. Where older McLarens emitted a muffled blare that recalled something you’d ski behind, the 600LT’s exhaust frequencies are tastier, more linear and concordant. The Spider, naturally, presses its biggest advantage over the coupe by putting more of that sound in your ears, and wind in your hair.

Can the Spider Squash a McLaren SUV?

If the McLaren’s chassis doesn’t satisfy your carbon-fiber diet, the brand will let you gorge on more: This particular 600LT featured an extra $52,000 in fibrous add-ons, from its front splitter, fender louvers and side skirts to a $730 intake plenum. For McLaren fans, that $52,000 could cover a nice trinket for a niece or nephew, like a Ford Mustang Bullitt. That largesse, in addition to options such as “Chicane Effect” gray paint ($4,450) and a Bowers & Wilkins audio system ($4,410), turbo-boosted the sticker to $339,250—about $20,000 more than a base-model 720S Spider.

At those prices, the 600LT will do its part to plump McLaren’s bottom line. But with every rival—Lamborghini, Bentley, Rolls-Royce, Porsche, Ferrari and Aston Martin—giving up and creating the SUV’s their customers demand, it’s hard to see McLaren further closing the sales gap without a competing SUV of their own. Heresy? We’ll see.