With lambswool floor mats and rich leather throughout, the Cullinan's cabin is arguably more luxurious than a five-star resort. 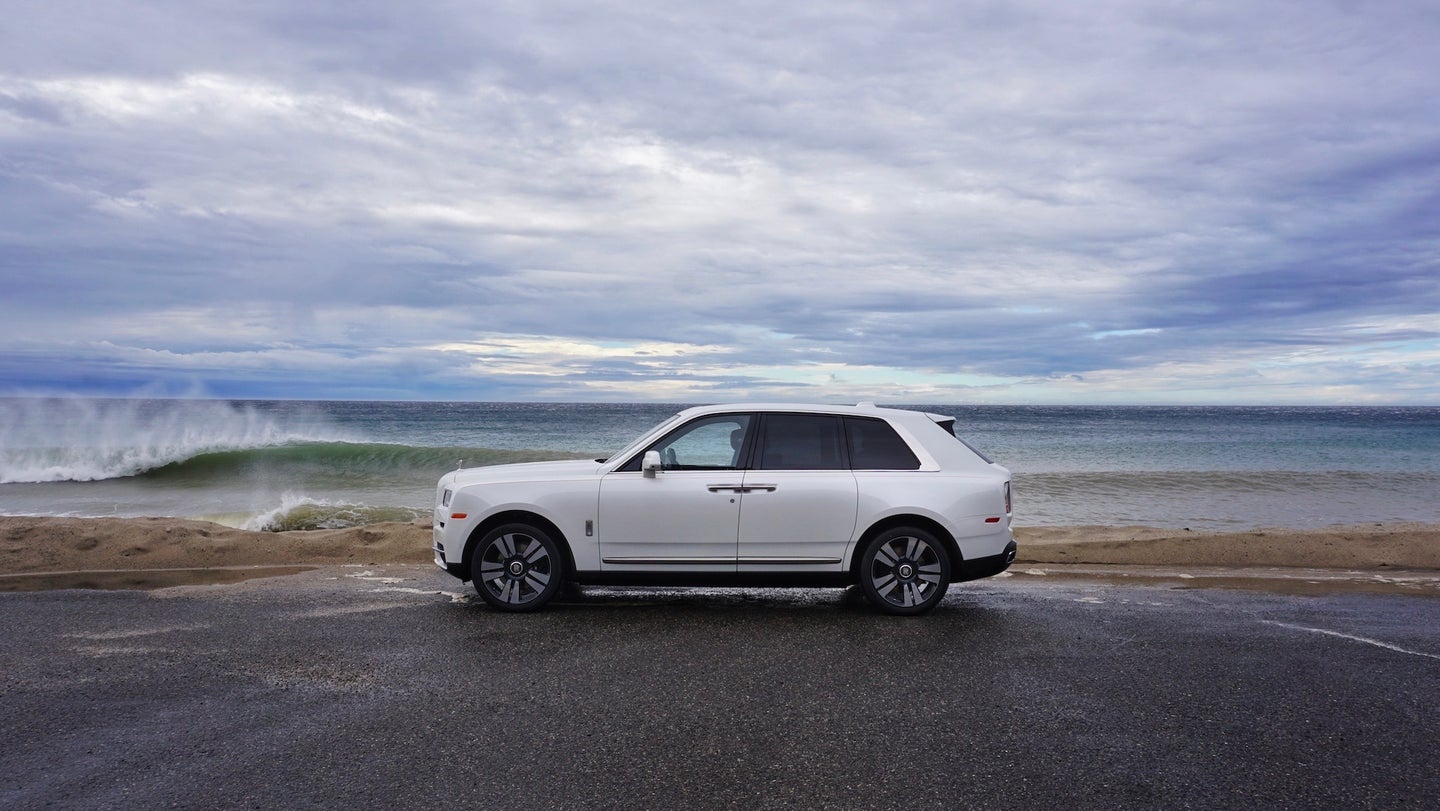 The 2019 Rolls-Royce Cullinan is the kind of vehicle where you never forget the moment you first laid eyes on it. Enormous and extravagant, it boasts a presence that's arguably even more awe-inspiring than the automaker's ultra-luxurious sedans. The Cullinan's front end is traditional Rolls, but the surprisingly modern hatchback tail is as glamorous as the streets you're likely to find it on: Fifth Avenue, Rodeo Drive, Michigan Avenue, Champs-Élysées.

Considering I'm more of a street-taco kind of guy than a canard à la presse eater, my idea of getting to know Rolls-Royce's first-ever SUV didn't involve a glamorous zip code. When I was handed the keys to one for a few days, I had a far more proletarian mission for this ornate vehicle: to uncover if a $330,000 SUV ($410,000 as tested) could serve the needs of the masses who can't afford oceanfront real estate. So I decided to do the least-fancy thing ever—or at least, something 99.9 percent of luxury car owners will never do: skip the five-star resort, and sleep in a Rolls-Royce Cullinan.

I'm not talking about a rest stop cat nap, either. I'm talking about a full-fledged camping adventure, one that involved living out of the Cullinan for a couple of days without human interaction—and most certainly without having Uber Eats deliver Cristal and caviar.

Have you ever gone to a Walmart in a bad part of town while driving a Rolls-Royce? I have. Three times. Once in a Dawn, once in a Wraith, and most recently in the Cullinan. Needless to say, I parked far from the entrance in order to minimize the chances of rogue shopping carts wreaking havoc on the glitzy Andalusian White paint.

Wally World was for stocking up on supplies. Firewood, check. Sleeping bag, check. Lawn chair, check. Blanket, bottled water, food—check, check, and check. After wrangling the last poncho off the shelf (rain was expected in SoCal when I was there, so people were freaking out), I made it out of Walmart happy to find my towering Brit unscratched.

One of the three unlabeled buttons on the leather-wrapped key fob causes the Cullinan to graciously open its two-piece tailgate. The large hatch swings upward like a swan gently landing on a lake, while the bottom partition folds down to provide a loading dock of sorts to make sure one doesn't scratch the $11,000 bespoke paint. With 21 cubic feet of space, the back of the Cullinan accommodated my newly-purchased camping gear with ease, even along with my suitcase, backpack, and camera equipment. (In case you're wondering, the Bentley Bentayga offers just 17.1 cubic feet.)

I decided to have one more decent meal before leaving civilization, so I went to the one restaurant that's always a solid eight from coast to coast: Chili's. Considering I'd dropped a pretty penny at Walmart, half-price appetizers sounded like my kind of deal.

While sucking down free strawberry lemonade refills and researching the Cullinan's features, I realized I'd been closing my own doors like a filthy peasant. It turns out there are two buttons located above the headlight switch that will automatically close the driver and passenger doors, much like in the Wraith, Dawn, etc. I also discovered that, for some reason, Rolls-Royce doesn't offer the trademark starlight headliner in the Cullinan. If learning that I'd been wasting my energy closing my own door had made me upset, discovering that I couldn't have twinkling stars in my roof really rocked my world.

After demolishing a round of Southwestern egg rolls, I climbed back into my white stallion, closed my door the fancy way, fired up the 6.75-liter twin-turbocharged V12 and set out to plug in my iPhone...only to be stymied when I couldn't find a compatible place to plug in. Rolls-Royce says there are five USB charging ports in the Cullinan—but what it fails to mention is that three of them are the smaller USB-C, not the more conventional style most cars are equipped with. After extensive digging, I realized there were two regular USB charging port in the rear center console...near the floor...underneath a secret plastic cover. I spent the rest of my trip plugging my cord in near the back seat and running it all the way to the front of the car.

My home for the next two days was to be a lovely, secluded spot that had been mostly spared by the savage wildfires in the area. Given recent thunderstorms, many camping spots had been washed out, so I opted to set up camp down the hill at Thornhill Broome State Beach. It wasn't paradise, but it had less standing water and mud...and fewer mosquitos.

The Cullinan's all-wheel-drive and air suspension quickly came in handy, allowing me to confidently make my way up and down park roads that, although paved, were caked with mud and gravel courtesy of recent landslides. Seeing how easily this 6,000-pound vehicle on street tires—ones designed to enhance the "magic carpet ride" Rolls loves to brag about—could make its way up sloppy trails was astonishing. It's even more so when you realize that the Cullinan sports Rolls-Royce's first-ever all-wheel-drive system.

Once at my campsite, I began the lengthy process of turning the five-passenger SUV into a temporary home. The trunk had to be cleared in order to build my sleeping chamber; my suitcase went into the passenger front seat, the camping gear outside, and the rest of my stuff was neatly organized throughout. I even set up my dinner service (food, napkin, drink, silverware) on one of the folding rear tables. I may be about to live in a car for two days, but gosh darn it, I'm not about to live in clutter.

It's worth mentioning that my tester was equipped with the power-folding bench seat in the second row and not the "immersive seats" (a fancy name for captain chairs), which feature a center console between them. This meant my rear seats could be folded at the touch of a button to expand cargo room—or make a bed. And, speaking of buttons, the Cullinan's ride height had the ability to be lowered in order to facilitate loading and unloading heavy items, which also proved helpful when it came to entering and exiting my rolling hotel.

Once darkness fell, I started growing both hungry and sleepy, so I climbed into the Cullinan to eat dinner and call it a day. A delectable platter of prosciutto and salami accompanied by cheese and crackers awaited me, along with an exquisite auditory experience courtesy of the rich, clear tones of the 19-speaker sound system Rolls-Royce simply calls "Bespoke Audio." And like a true millionaire socialite, I could control the audio system entirely from the dual rear screens; whether I felt like eating to Miley Cyrus or Metallica, I could make it happen without having to reach to the front. In true Rolls fashion, rear passengers can also operate the climate control, navigation, and phone connectivity systems from the rear while the vehicle is in motion.

This funky idea of camping in a Rolls-Royce was turning out pretty well...until around 2 a.m., when a light rain that had been pattering down for a few hours turned into a full-on thunderstorm. Puddles on the pavement started to look like ponds. Sixty-five-miles-per-hour winds threatened to rock the Cullinan like it was a Honda HR-V. Needless to say, not mine or anyone's idea of a relaxing night under a starry Californian sky.

Still, that middle-of-the-night storm prompted a couple revelations about this Roller. One: this thing is solid. Not just luxury car solid; an abnormal, building-like solid. Even in the wind, it was surreally serene inside my pop-up suite. Two: it's amazingly well-insulated. With temperatures dipping into the mid-'40s, I was pretty sure I would have to run the engine at some point to warm up the cabin. Negative. I don't know how well other fellow campers fared that night, but my guess is, not as well.

Darkness eventually subsided, and an eerie, thick fog bathed the beach in the dawn light. However, the rain remained strong. I fired up the V12 to defrost the windows and charge my phone. (You could call that a huge waste of 563 horsepower and 627 pound-feet of torque, but such is life.) But with wireless coverage spotty on the beach, I was left to pass time inside the Cullinan and watch the rain wreak havoc around me, the water eventually reaching the middle of the Cullinan's beefy 22-inch wheels. (Luckily, the Cullinan can wade through 22.2 inches of standing water, with its suspension set to off-road mode.)

The boredom made this perfect time to poke around the Cullinan. From the open-pore Macassar Ebony wood that covered much of the cabin to the lovely stitching found throughout the gazillion leather-wrapped surfaces and the perfectly polished metal handles, knobs, and levers, the interior was practically mesmerizing. The lambswool floormats, which felt incredible on my bare feet, deserve special mention: I literally couldn't have booked a hotel in Los Angeles that offered lambswool carpeting throughout. Likewise, on average, eight cow hides are used to craft a single Rolls-Royce interior. Can the master suite at the Four Seasons claim that?

I Can See Clearly Now...

Eventually, the rain vanished and the sun came out to play, bringing the outside temperature up to a "balmy" 60 degrees. By now, my love affair with the Cullinan had hit a couple speed bumps. The switches to fold the rear seats had a mind of their own, oftentimes requiring multiple pushes to work. Most of the buttons around the cabin are unlabeled, which may not pose a problem to professional chauffeurs, but causes enormous frustration for first-time users. And the windshield wiper stalk is located directly below the steering column-mounted shifter (and is nearly identical in shape and color), causing me to spray the windshield every time I reached for the gear lever.

Despite the car's (minor) flaws, my second day with the Cullinan was a pleasant one. I spent the afternoon lounging in the backseat reading a book while listening to the waves crashing, as well as tackling a few sandy and muddy trails—attracting odd looks from people wondering why a guy was living out of a filthy Rolls-Royce. I didn't care—and neither did the Cullinan, which conquered every surface it encountered, regardless of how bad the trails were.

My final evening in the Cullinan was much more pleasant. The clouds gave way to stars, and the heavy rain and strong winds were replaced by the soothing sound of crashing waves and chirping bugs, leading to a lovely second night being, quite possibly, the first person to ever sleep in Rolls-Royce's first SUV.

In doing so, I realized the Cullinan isn't just a pretty status symbol to park outside the Hermès boutique. It's a versatile vehicle through and through, one that can get you from point A to point B, even if the drive between points involves mud, sand, standing water, or other obstacles that would stymie most cars, like the fire-damaged terrain near Malibu I saw on my way back to LA. Rolls-Royce didn't just make a handsome SUV—it built an effective SUV.

Even though the Cullinan name is trending these days thanks to Rolls-Royce, the term dates back to the beginning of the 20th Century, when it was given to the largest uncut diamond ever unearthed. The 3,106-carat diamond—roughly the size of a large grapefruit—eventually made its way from Africa to the queen of England, and has remained the star of the Royal Jewels ever since. I once had the pleasure of admiring one of the finished Cullinan diamonds (it was so large, it was cut into multiple stones) while attending gemology school in New York City. Now I can say I've had the opportunity to experience a different kind of Cullinan—one that's equally awe-inspiring.