Most Bentaygas likely will never touch a dirt road. But it's nice to know this Bentley can have fun there when it does. 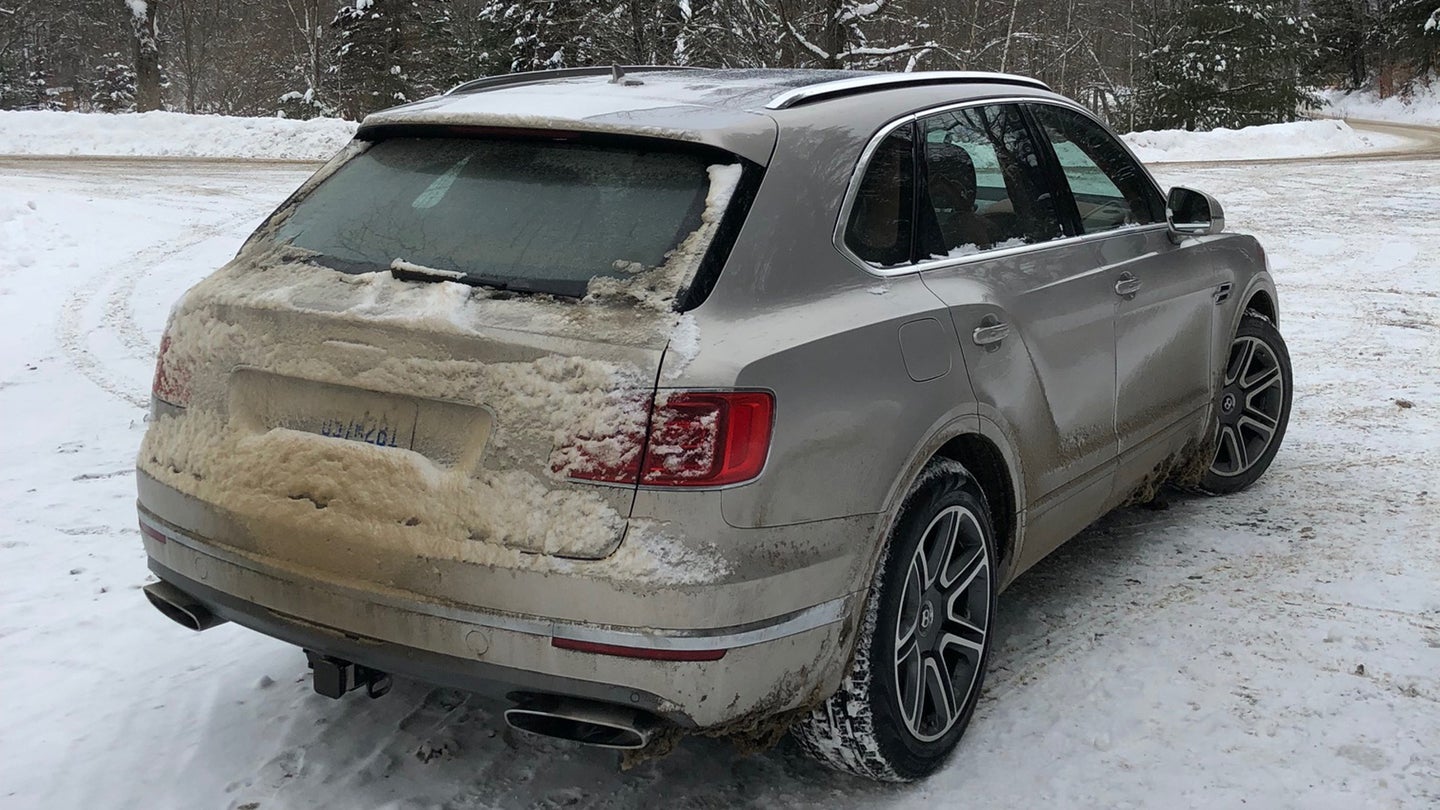 Stowe, Vermont is exactly the sort of place you wouldn't be surprised to spot a Bentley Bentayga in the wild. This picturesque resort town may only have a year-round population of around 5,000 people, but as the home of Mount Mansfield and the Vail-owned ski resort splayed across its slopes, it plays host to the vacation homes of veritable oodles of well-to-do people from across the Northeast. New Yorkers, Bostonites Bostonians, Connecticutians, and of course, les Quebecois flock to it—many of them behind the wheels of leather-lined off-roaders bearing impress-the-Joneses badges. Indeed, fancy sport-utility vehicles bearing out-of-state plates have been a staple of its roads for about as long as there've been fancy sport-utility vehicles.

But it's also the place where I first learned how to drive, back in a series of sixth- and seventh-gen Honda Civics. I started out a by-the-book responsible driver, conducting myself according to the rules of the road and the practices preached by my parents. That, not surprisingly, got old real quick. But I was fairly certain my folks would strip the keys out of my hands in a heartbeat if I came home sheepishly bearing a speeding ticket. I needed somewhere even the ever-so-bored super troopers wouldn't be driving past or posted up with a radar gun.

So I took to the back roads—the hard-packed dirt two-lanes running like capillaries between the arteries and veins of pavement connecting the towns and villages of rural America. Take enough turns off the main road anywhere in Vermont, you'll find a dirt road beneath your tires. I learned every one within 10 miles of my house over the course of my high school years; I learned the turns, the whoops, the dips, the spots where you could haul ass at three or four times the legal limit.

So, when given the chance to drive back to my hometown in Bentley's lifted 12-cylinder brute up to Stowe in the chill of winter, I felt something of a moral obligation to throw it down some of the backroads I grew up on. Partly as a tribute to that teenage kid who spent all that time blasting around in econoboxes, dreaming of driving better, faster, sexier cars...and partly because, well, tossing a 600-horsepower, quarter-million-dollar SUV around like a rally car sounds pretty damn fun, doesn't it?

It was hardly a shock to find that this 5,400-pound-plus vehicle rode smoothly on the highways—the drive up was about as relaxing as a 300-mile slog gets, even in spite of several patches of nasty traffic found in the commuting hell known as Connecticut. But it was the way the Bentayga handled the roughshod dirt roads (and, admittedly, the frost heave-afflicted two-lanes that make up most of New England's state and local highways) that stirred up the real surprise. Considering this crossover comes equipped with everything from 48-volt-powered active roll bars to an automatically-levelling air suspension, it wasn't much of a shock to learn that the trick suspension soaked up all the imperfections with aplomb—it's a Bentley, after all—but it was rather startling to discover just how much fun this weighty machine seemed to be having. The crew from Crewe must have snuck into the future and stolen some anti-gravity tech from Starfleet, because this giant machine flies through turns as though it weighs half as much as it does, all the while shielding your coccyx from the worst of the ground below the wheels.

The power, as with most turbocharged 12-cylinders, is immense—as you'd expect with 600 horses and 664 pound-feet lying around for the taking—but supple and free-flowing all across the rev range. Indeed, it's the sort of engine where the power delivery is best described with adjectives usually ascribed to French cuisine: buttery, rich, indulgent. It's a delight to ooze the throttle down, ever-so-gently feeling the giant motor spin and thrum through your right foot as the engine sends its mechanical motivation through the eight-speed gearbox and out to the four massive wheels. On Vermont's back roads, where the turns are frequent, the straightaways short, and the threat of an unexpected car or cow lies behind every bend, the Bentayga found its groove volleying back and forth between third and fourth gears, riding the power up through the middle of the engine's range when the coast was clear and using the Domino's-large-sized brakes—15.75 inches up front, 15.0 inches in back—to haul it down closer to the speeds suggested on the yellow diamond signs whenever they appeared.

And, as plenty of others have noticed...this sucker is quick. Bentley quotes a 0-60 mile-per-hour time of four seconds flat, but Car and Driver's test crew found it could blitz from 0 to 60 in 3.5 seconds and rip off the quarter in 11.9 seconds at 118 mph—stats that put it neck and neck with the likes of a Ferrari F40. I floored it with the nose pointed up a hill, and it felt like a space shuttle launch—a mighty pile of mass building speed and momentum with impossible quickness. In the real world, it's the sort of power that seems even more unnecessary than a supercar's superb output; at least in a 600-horsepower sports car, all that might feels controlled in a tightly-wound package. In the Bentley, it almost feels like excess for the sake of excess—like a craft beer with the alcohol content cranked up to wine-like levels.

Inside, though, there's little to complain about, unless you're the sort who considers Neiman Marcus "common." It’s the least-nice Bentley, but in the same way that the F-35 is the slowest fighter jet in the Air Force’s arsenal: It's still pretty friggin' impressive. Yes, a handful of trim pieces in the interior have a whiff of Audi to them, and there's more plastic than you might expect from a Bentley; if every other car in your garage is a Rolls-Royce or Pagani, the Big B might seem a bit humble by comparison. By any reasonable standard, though, it's otherwise beyond reproach, with seats comfortable enough to plop down in a home theater and finger-pleasing textures everywhere to be found. My mother, who's been lucky enough to score a ride in quite a few nice cars over the years thanks to her son's chosen profession, suggested the thick saddle leather brought to mind literal saddles. “It smells like a tack room,” she said.

Oh on a side note: God knows what Crewe makes those floormats out of, because not only are they chinchilla-soft, they're nearly impervious to stains. That picture below was after a week of tamping on them with boots perma-coated in dirty snow.

So yes, it has flaws—but the interior ultimately feels better put-together than nearly any other four-by-four out there. (At least, until the Rolls-Royce Cullinan finally arrives.) A Range Rover SVAutobiography—the vehicle most-often stacked against the Bentayga in The Drive's office chats—might hold a candle to it in some places, but its leather doesn't feel quite as soft, its wood trim doesn't seem quite as warm, and even the newest InControl Touch infotainment system isn't as convenient as the Bentley's setup, VW Group commonalities be damned.

That said, even the bright chrome, rhinocerine proportions, and supple leather of this Bentley weren't enough to impress Mom as much as I thought they would. Granted, she was impressed by the interior, and I probably spooked her more than she wanted to admit the first time I floored it onto the interstate with her riding shotgun. But at the end of my stay, she still seemed less impressed than I figured she'd be with this quarter-million-dollar crossover.

“Next time," she said, "can you come home in something a little more flashy?”

So, to any Bentley folks reading this: If you happen to have, say, a bright orange Continental GT lying around the East Coast this year, I may need to borrow it next time I have to head up to Vermont.