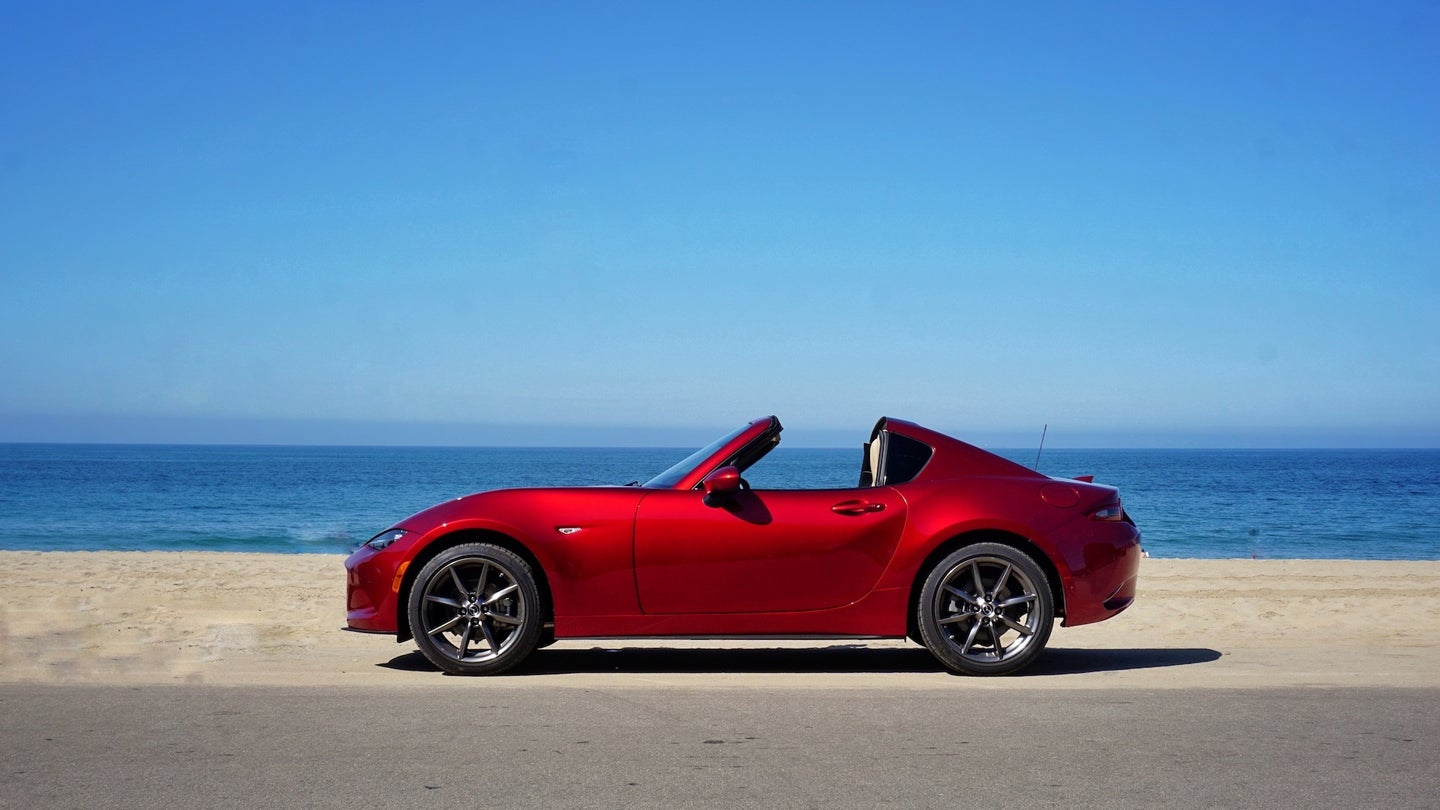 California is easily one of, if not the most beautiful state this great country has to offer. But like most locales, there is a fierce rivalry between Southern and Northern Californians who claim their end of the Republic is the prettiest, the coolest, the best. Of course, there are strong arguments to make for both sides, with an endless supply of sun shining down on glamorous beaches in the south, and striking mountains that produce jaw-dropping vistas in the north. Regardless of which tribe you're in, the common denominator between NorCal and SoCal is the exhilarating roads.

I recently explored a good chunk of SoCal over the course of two days and roughly 600 miles of city, canyon, coastal, and interstate roads. From San Diego to San Luis Obispo, I drove, I ate, I photographed, I lost cell phone signal, and I applied sunscreen more times than I can remember. Why? Because I did the entire trip topless and the Cali sun doesn't forgive; at least not like it does back at home in Indiana. Well, technically it wasn't me who was topless, thank God, but my ride: the 2019 Mazda MX-5.

For 2019, Mazda went back to the powertrain drawing board and gave the peppy little roadster a bit more oomph. Actually, quite a bit more. The 2.0-liter four-cylinder engine now produces 181 horsepower versus the outgoing 155, and the tachometer redline has been pushed all the way to 7,500 RPM from 6,800. Plus, the final drive ratio was shortened for better acceleration. Sure, these may not be record-breaking numbers or life-altering tweaks, but allow me to remind you that the MX-5, or let's call it Miata for old time's sake, has never been about horsepower, but about fun, freedom, and most importantly—balance. How much does Mazda care about keeping things balanced The new MX-5 (the ND) is as light as a first-gen Miata (the NA). Yes, even with the retractable hardtop. That's how much the Japanese marque cares.

All specifications aside, what truly matters in a car like the legendary Miata is the endless headroom that both the soft-top and "RF" (retractable fastback) models offer, the cheesy smile they put in your face, and the awesome places where they can take you. So, without further ado, these are the awesome places where the 2019 Mazda Miata took me.

"Discovered by the Germans in 1904, they named it San Diago, which of course in German means a whale's...." Okay, the MX-5 didn't really take me to San Diego, that's where my journey actually started, but one can't visit San Diego without dishing out a little Anchorman's Ron Burgundy. "Drink it in, it always goes down smooth."

This little pie shop is a must when visiting this neck of the woods for multiple reasons. One, they serve delicious pies. I personally love my slice of apple pie smothered in melted cheddar cheese. Two, it's one of the few places where you'll find cold refreshments and good food for many, many miles.

Follow the desert heat to explore cool metal sculptures quite literally in the middle of nowhere. Not so cool fact: it was over 110 degrees when I was there. Remember what I said about sunscreen and refreshments?

Originally built on Mexican territory back in 1816, San Antonio the Pala is the only California mission to have ministered without interruption to Native Americans since it opened its doors. Nowadays, the perfectly maintained gardens provide a bit of an oasis in a rather arid part of the state.

Did you even go to Cali if you didn't go to Malibu, brah? Yes, all the cliches apply here, but there's no denying that whether you're into over-the-top homes, cool cars, or luxury retreats, Malibu is the business. I enjoyed a swanky overnight stay at Calamigos Guest Ranch and Beach Club, where the ratio of G-Wagens to MX-5s was way off, but I enjoyed it anyway.

It doesn't matter what beach, really. When you live in the Midwest and you catch a glimpse of the ocean while on a business trip, it doesn't matter whether it's the Pacific or the Atlantic, or be it a communal beach in LA or a private oasis in Malibu—you simply go, take photos, and send them to your significant other (in the Midwest) to make them jealous.

Mulholland is an icon in its own right. Auto and motorcycle enthusiasts love it primarily because of its dramatic twists and turns, but also because it doesn't forgive. A tiny mistake on these narrow canyon roads will cost you big time.

Tired of driving? Hey, it happens to the best of us. Even with the comfortable leather-wrapped seats of the GT trim and the newly-adapted telescoping steering column, the Santa Barbara Harbor presented me with an excellent opportunity to refuel my own tank with fresh seafood from Brophy Bros.

I wished I could've continued my trip north to San Francisco through the mesmerizing Big Sur and Monterey Peninsula, but my time behind the wheel of the world's best-selling sports car was up. The charming boardwalk at Pismo Beach allowed me to relax before flying out of San Luis Obispo's miniature airport.

In the words of Tim Olson, Mazda's media relations boss and motorsports aficionado: "The goal was to make the 2019 MX-5 as fun to drive as possible. That's always the number one priority."

Did they hit the mark? Yes, and I've got the tan lines to prove it.