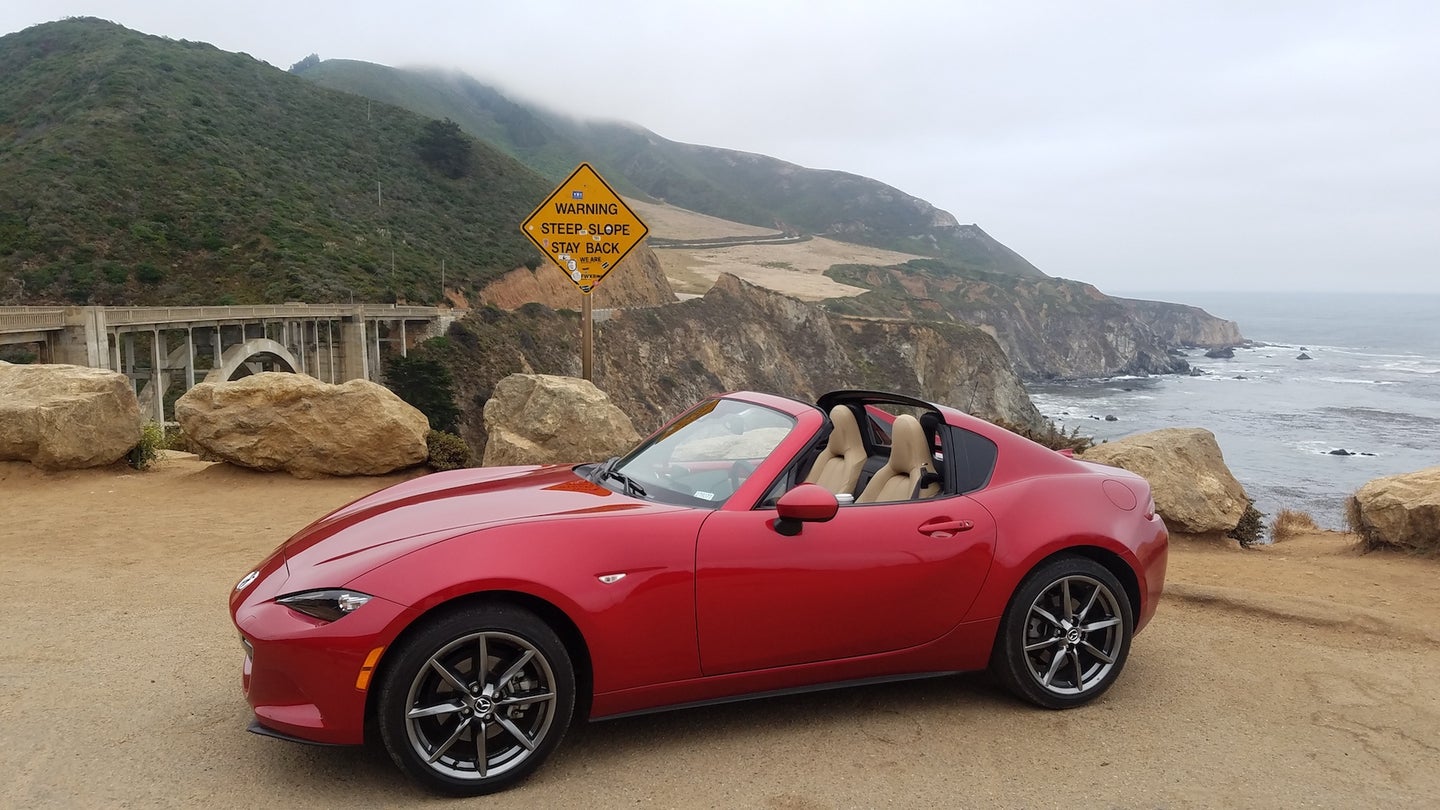 Highway 1. Just the sound of it fires the imaginations, and the engines, of car and motorcycle enthusiasts. And California’s 666-mile, Pacific coast dream road doesn’t get any better than when it passes through Big Sur, in all its misty, mythical splendor.

Here at the annual Pebble Beach concours on the Monterey Peninsula, there’s just one problem: I can’t get to Big Sur. Triggered by an historic drought followed by two brutally rainy winters, an epic landslide in May rained 1 million tons of earth and rocks onto the scenic roadway and into the Pacific. Nearly one-third of a mile of Highway 1 was instantly buried beneath 35 to 40 feet of debris and likely destroyed.

One of the worst cataclysms since the road’s 1937 opening cut off Big Sur in both directions, including a forced demolition of the rain-weakened Pfeiffer Canyon Bridge. Hardy locals in the hamlet where Jack Kerouac and Henry Miller once lived have dubbed the place “Big Sur Island.” For months, isolated residents—artists, writers, businesspeople, bohemians—have been forced to hike roughly 30 minutes to fetch groceries or supplies, and then back on a 1-mile switchback trail. These folks tend to treasure Big Sur’s remoteness and solitude, but this is ridiculous.

Tourism has dried to a trickle. The midcentury Nepenthe restaurant, my favored spot for magical ocean views on its outdoor terrace, a glass of local Santa Lucia pinot noir in hand, has bravely stayed open. (Above the terrace sits the log cabin that Orson Welles bought as a love nest with Rita Hayworth in the 1940’s, before he sold the cabin and 12 acres for all of $12,000). The Big Sur Bakery is closed. The Post Ranch Inn, the famously exclusive retreat, is actually offering free helicopter rides from Monterey to lure guests who stay at least three nights.

Yet from my selfish perspective, the hillside calamities have turned back time and made Highway 1 the driving paradise I remember: No tourists means no road-clogging RV’s. No pussyfooting Priuses, their drivers too intimidated by the perilous cliffs to do the speed limit, or too busy gawking to notice the headlight-flashing cars stuck behind them.

With no helicopter at my disposal, I secure the next best thing for canyon strafing at dawn on Sunday: A 2017 Mazda MX-5 Miata RF Grand Touring, in candy-apple “Red Soul Metallic,” with a snappy six-speed manual transmission. In just a few hours, I’ll attend the billionaire’s bash that is Pebble Beach, and find myself at a table in Bentley’s suite next to Arnold Schwarzenegger, as Jay Leno performs emcee duties on the golf fairway outside. But for now, it’s just me, a Miata and a virtually deserted Highway 1. Guess which ends up being more fun?

I drop the Miata RF’s fully motorized hardtop—unlike the ragtop version, there’s no headliner latch to fuss with—and buzz south from Monterey. A rising sun begins to dissolve the morning marine layer, its salty dew slicking the Mazda’s windows and interior. I reliably forget that the Monterey Peninsula isn’t southern California, and how chilly it gets along the coast. I crank up the heat and mentally thank the seat heaters on leather-wrapped buckets—a luxury that didn’t exist when I owned a Miata in the Nineties – that are standard on this deluxe, $33,455 Grand Touring model. (At this price, ventilated buckets would be nice for hotter days and climates).

Flying past Point Lobos, where seals, otters and whales make it anything but the typical state park, I spot my first roadside warning that Route 1 is closed en route to San Simeon and its famous-slash-infamous Hearst Castle. I hop out to snap a few shots and admire this two-seat amusement ride from Hiroshima. The new RF (it stands for “retractable fastback”) does add about 113 pounds to a softtop Miata. But since Mazda stripped nearly 190 pounds out of every new Miata, this heaviest RF Grand Touring still weighs only 2,445 pounds with a six-speed manual transmission—about as Lotus-like as new sports cars get. So even with its hardtop love handles—including those alluring roof buttresses that partially obstruct the top-down view—the RF strikes me as the Miata to have right now.

Yes, the RF costs roughly $2,750 more than a comparable softtop Miata. Here’s one reason why it’s worth it: The RF looks so hot, so fresh, that many people don’t know that it is a Miata. The Miata may be tiny, but since 1990, its biggest baggage – unfairly, for a sports car that’s raced more than any production automobile – is the way some people perceive or dismiss it as a cutesy chick car. Drive this RF, and it’s a matter of time before some well-meaning bystander asks if it’s a Jaguar, or some other posh marque: Not even close, but you won’t be offended by the mistaken identity.

I definitely don’t mistake the RF’s driving experience, the dopey grin that any Miata plasters across my face. As ever, the Miata is the David’s slingshot of sports cars, ready to knock Goliaths on their ass when they scoff at its puny muscles. “Slingshot” also describes the Mazda on Highway 1, with its beautifully neutral handling, so can’t-miss predictable that I soon switch off stability control. A bit like a motorcycle, the Miata’s diminutive footprint grants another performance edge on this kind of road. Taking up barely half its lane, leaving plenty of room for error, the Miata inspires the confidence to let it all hang out.

The scalloped, shrouded Pacific coast looms ahead, angry waves pummeling its cathedral-like grottos and beaches. In my entire life, I’ve never seen Highway 1 this deserted. Big Sur has always been a place where humans can feel like interlopers; where, should you need a refresher, you're reminded of your relative insignificance. Even with this 68-mile scar of pavement across its rugged face, Big Sur guards its primordial beauty; the broccoli-green slopes, plunging cliffs and coastal creeks that made the Santa Lucia Mountains one of the most inaccessible reaches in America. The first white man didn’t arrive until 1768, with Spanish missionaries determined to secure that nation’s hold on “Alta California” and keep Russians and the British away.

I’d driven a Lamborghini Aventador S just the day before, and I briefly chastise myself for not bringing it here for a romp – until I recall that I’d have to take some of these corners at triple-digit speeds to test my mettle in the 730-horsepower, 217-mph Lambo flagship. These deserted curves may suddenly be my private autocross course, but the penalty isn’t some orange cone, but rather a 100-foot drop off a granite cliff.

As ever, this Miata produces body roll by the barrel, yet it’s the fun kind: I storm deeper and deeper into corners, letting the car take a set, and lean on the ultra-grippy tires for all they’re worth. Compared with the softtop, Mazda made a few subtle, helpful tweaks to the RF’s steering and suspension, though I’m pining a bit for the RF Club version I drove a few weeks ago in New York. Its standard limited-slip differential (on manual versions only), Bilstein shocks and front shock-tower brace (along with tough-looking black BBS forged wheels, Brembo brakes and extra body bits) noticeably tame that body roll, and a distracting rear-end wobble near the limit that tells you oversteer is fast approaching. But when any Miata finally breaks free into a drift, it’s fun and blessedly easy to reel back in. I actually slide the Mazda on the approach to the Bixby Bridge, the bravura concrete span that soars 260 feat over Bixby Creek below – completed in 1932, five years before the road itself opened between Carmel and San Luis Obispo. Climbing into the gnarled cliffs beyond, I gripe for a minute over this four-cylinder engine, and just as quickly feel guilty: The Mazda is working its little heart out.

But facts are facts. Neither Miata is slow, the RF scooting to 60 mph in about 6.2 seconds, versus 5.8 seconds for the softtop. And unlike some turbocharged whiners, I don't want or need 250 or 300 horsepower in a Miata, a car that’s all about building and then maintaining momentum through every corner. But despite its newly frisky exhaust note, the Miata’s 2.0-liter, 155-horsepower Skyactive engine remains a compromise. It’s an engine developed for fuel efficiency first and performance second. That includes a thrifty 35 highway mpg for the manual RF, 36 mpg with a six-speed automatic, and 30 mpg combined. That's a huge 25-percent mileage boost versus the previous Miata, which managed just 24 mpg combined. Yet the engine doesn’t reward redline chasing the way you'd prefer in this modern take on vintage British and Italian roadsters. The engine doesn't rev freely enough in that light-flywheel manner of old  – at least it’s not downright sluggish like a Subaru BRZ’s boxer four -- and the party ends at a premature 6,800-rpm redline. The Skyactiv does deliver more torque across a more-useable band than before, at a peak 148 pound-feet versus 140 for the previous model.

Knockout style aside, the RF roof offers practical temptations. Roof up, the RF’s cabin is dramatically quieter than its softtop cousin, thanks in part to a thickly insulated headliner. Remarkably, the stowed roof panel and rear window don’t steal a whit of trunk space, unless you count an owner’s manual that’s relocated to that space. Mazda even says that the RF’s weight balance is closer to a 50/50 ideal, with the hardtop shifting some mass to the rear. But there’s some trouble in top-down paradise. Permanent blind spots are the price of style for those saucy roof buttresses, if not their unsightly, black-plastic faux quarter windows.  And bring your earplugs for highway blasts: The targa arrangement produces a maelstrom of wind turbulence when you exceed 65 mph or so. It’s like a curling amphitheater perched behind your head, catching every bit of the breeze. Let's hope Mazda can come up with a design fix to better manage the breeze.

The roof stows or erects in a reasonable 13 seconds; though I also wish it would operate at much higher vehicle speeds than 6 mph, as do many modern convertible tops. Mazda says the design ensures that long-haired occupants don’t get their flying tresses caught in the works. My shorter locks are untouched on this drive, but the roots are tingling when I reach the cutoff barriers of Highway 1 near Deetjen’s Big Sur Inn. I’ve got no time to hike in, so there’ll be no visiting some favorite Big Sur spots, from intimate Pfeiffer Beach, where Richard Burton and Liz Taylor memorably frolicked in The Sandpiper; to McWay Falls, which drops 80 feet from McWay creek directly onto the sandy beach below.

I choose a mellower Miata pace on the way back to Pebble Beach, the morning road only now beginning to fill with other drivers. After a soul-cleansing cliffside drive in this elemental roadster, I'm not looking forward to sipping champagne and rubbing elbows with impossibly wealthy collectors, their older cars and younger wives on display, before they snap up another gratuitous trophy or two at the evening car auctions.

In a few weeks or months, I do hope, the HIghway 1 gateway will reopen, and the hardy, weed-chilled denizens of Big Sur can go back to bitching about the tourists. Until then, I'll take this epic blast from Highway 1's past, in what's surely the best Miata yet.