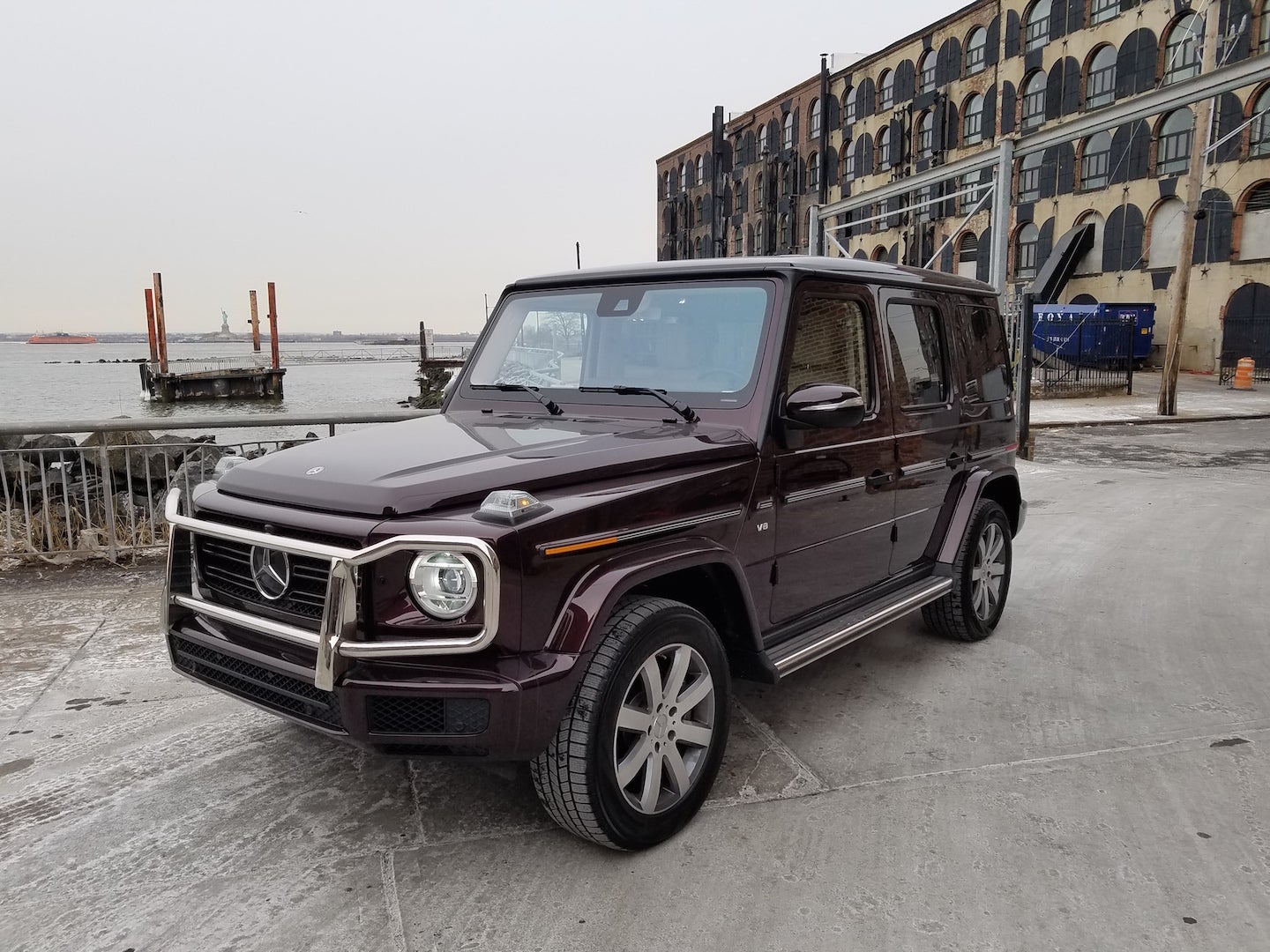 Take note, everyone reading this: The 2019 Mercedes-Benz G-Class, née Geländewagen, sets a record that will surely never be broken among modern automobiles. This famously right-angled SUV replaces a model whose basic parts trace back 40 years. Even a Corvette, at its complacent peak, only went 14 years between full redesigns (1968-1982). Design studies for the G-Wagen go back even further, to wooden (rather than clay) models in 1973 that envisioned a militaristic off-roader that adventurous civilians might also favor.

Officially, the U.S. didn’t see its first G-Wagen until 2002. But  gray market sales at six-figure price tags and that pillbox-on-wheels style had already made it a favorite among Americans who happily overpay for handmade designer goods with a great backstory. As The Drive contributor Brett Berk aptly noted, a G-Class is like a vintage Macintosh tube amp or a Purdey shotgun (I’ll add Patek Philippe watches to that list): It’s something you buy because of what that product says about you, or the way its authentic design and analog function speaks to you.

Of course, you also buy it because you can: For too many people, a G-Wagen is purely about badge status or spending a ton of cash, as evidenced by super-frivolous versions, including an all-new AMG G63 (starting from $148,495) that supplies 577 horsepower through a 4.0-liter twin-turbo V8, good for a 4.4-second assault from 0-60 mph. Unsurprisingly, more than half of G-Glass buyers have opted for mega-dollar AMG ones—a higher percentage than for any other Mercedes car or SUV.

But enough ancient history. Say hello to the 2019 G550—an SUV whose armor-like body fans will instantly recognize, but whose driving experience they won’t recognize at all. I realize the old model set a low bar for performance on pavement, but still, it’s incredible to bend a G-Class into a turn and feel like it’s not going to tip over. It’s also amazing to go over big bumps in a G-Class, and not have the steering wiggle and jiggle and threaten to redirect you into the next lane. (The old G had a archaic recirculating-ball design, invented in 1939 at GM’s Saginaw Steering Division.) This Mercedes basically skips four decades in terms of its ride, handling and comfort. Consider it Mercedes-Benz's in-house resto-mod, with a nostalgic body over a modern chassis and technology, delivering the best of both worlds.

And though I didn’t get a chance to go four-wheeling during my week with the Benz, the G-Class hasn’t sacrificed any off-road chops; it still offers a steel ladder frame, low-range four-wheel-drive, three locking differentials, and soaring suspension travel at all four corners. Ground clearance actually rises, including 10.6 inches beneath the lifted, newly independent front axle; approach, departure and breakover angles are improved; and the 4x4 crawling mode gets an even-lower gear ratio. A new “G-Mode” setting activates when you select low range or lock any differential via the familiar metal dash buttons, and adjusts the steering, throttle, adaptive dampers and transmission accordingly.

As brutally tested on the Schöckl—the local mountain near the G-Glass factory in Graz, Austria—the G-Wagen can easily climb or descend a 50-degree incline, or a more gut-wrenching (to me) 35-degree sideways slope. It can ford 27.6 inches of water—perfect for the day South Beach finally goes under—by automatically diverting air intake to a secondary channel mounted behind headlamps. Like a Rubicon-rated Jeep, the Mercedes flaunts those bona fides with a Schöckl badge, mountd below the B-pillar.

For city slickers who favor the G-Glass, the real breakthroughs include modern, variable-ratio rack-and-pinion steering, an independent double-wishbone front suspension (replacing the old solid axle), and a roomier interior whose luxury finally befits the six-figure price. (At $125,495, the G550’s base price actually outstrips Mercedes’s equivalent flagship sedan, the S560, by about $24,000.)

Since the New York area is lousy with G-Classes, it was easy for me to find a departing version at the curb for a little compare-and-contrast. The fresh model is nearly five inches wider, about two inches longer, and rides a 1.6-inch longer wheelbase. Mercedes has reworked the grille and its three-point star, smoothed out some sheetmetal, including the formerly rippled hood, and panel gaps are tighter. Round headlamps remain, but they’re now full LED units, including an attractive ring of daytime diodes that fades out simultaneously whenever headlamps glow to life. But signature elements remain, including the protective bull bar up front, the charming, bus-like turn indicators atop flat fenders, and the exposed spare tire out back. Naturally, Mercedes didn’t touch the old-school, pushbutton-and-latch doors, lest it face a torch-wielding mob of G-Wagen fans. And those doors close with the satisfying ka-chunk—think of an industrial walk-in fridge—of the original.

Expanded dimensions and a reworked chassis pay off with a more-livable cabin. The rear seat is (finally) habitable for adults, with 5.9 inches more legroom. There’s appreciably more elbow and shoulder room front and rear. You even get two actual cupholders in front, rather than the former sad little Nerf-basketball-hoop for the passenger’s beverage. A largely hand-built cabin also makes room for a boatload of Benz luxury, including the lovely Widescreen Cockpit—for some reason, an $850 option—which sandwiches a pair of 12.3-inch displays under bonded glass. Striking, turbine-style metal air vents mimic the headlamps’ shape.

My G-Unit kicked things up a notch with a $12,200 Exclusive Interior package, including one of several available Designo treatments; mine contrasted diamond-pattern “Macchiato Beige” leather with natural walnut, a fine match for the eggplant-colored exterior. The Exclusive package’s multi-adjustable seats featured some of the most robust, magic-fingered massagers in the industry. That package also gift-wraps the short, shelf-like dashboard in a beautifully fitted layer of Nappa leather. The passenger grab handle looks fit for a pricey attaché, faced with wood veneer and trimmed in more leather.

A downside is that, like a Jeep Wrangler, the G550 still isn’t an especially practical SUV. (An upside is that the Mercedes is shorter than it first appears, making it easy to park). Even with the expanded rear seat, lanky types may be asking front occupants to slide up a few inches. I drove to dinner with my girlfriend and her elderly parents, and I cringed a bit as they gamely helped each other climb into the Benz and back out again. Rear seats are set higher than the cargo area, so there’s no semblance of a flat cargo floor when they’re folded. Fuel economy is still terrible, as you’d expect from this aerodynamic brick with permanent four-wheel-drive: The EPA rates it at 13/17 mpg in city and highway, and I saw 14 mpg overall.

Of course, those practical demerits are the price you pay for having a hardcore 4x4. And for the first time, the G-Class’s Olympian off-road abilities don’t utterly compromise the experience on-road, where most owners will be spending 99 percent of their time. The G-Class and its stellar powertrain now feel like they’re on speaking terms, rather than fighting each other. The 4.0-liter twin-turbo V8 brings 416 horsepower and 450 pound-feet of torque, and it’s exactly right for this application, delivering a confident 5.6-second charge to 60 mph, accompanied by an exhaust blat that’s forceful without being excessive. The old seven-speed transmission makes way for Benz’s nine-speed paddle-shifted automatic that brings smoother gear changes and a wider ratio spread.

As noted, a major leap in steering and chassis control turn this former oaf into a credible performer. The rack-and-pinion steering banishes the obnoxious dead spot on center, and can be adjusted through Comfort, Sport and Off-Road modes. The stovepipe-tall body still leans into corners, but this SUV now takes a firm line and corners without disconcerting bobbles or course corrections. The effect isn’t sporty—a Chevy Traverse handles better, along with every car-based SUV in the Mercedes lineup—but the G-Wagen can finally stay out of its own 5,500-pound way. (That weight is actually down by about 375 pounds, thanks to more high-strength steel and aluminum in the structure.)

With about $14,500 in options aboard, my G550 reached $140,105. Yeah, that’s a lot. But where the Mesozoic-era model was indefensibly overpriced, especially in AMG trim, the new G550—and I can’t believe I’m saying this—seems almost fair by the standards of high-zoot SUVs. Look, a short-wheelbase Range Rover V8 starts at $106,000, just $19,000 below this G-Class. The Rover represents a better value overall—as does Mercedes’s three-row GLS-Class, but both (and the GLS in particular) are as staid and suburban. Then you’ve got a Bentley Bentayga V8 from $165,000 (or $200,000 in W-12 guise), a Lamborghini Urus for $200,000, or a Rolls-Royce Cullinan for $325,000. Those are all base prices, mind you—a far cry from what these ultra-luxury SUV's really cost with bespoke options. The Bentley, Rolls, and Lamborghini SUVs all have outstanding qualities, but their uninspired, hard-to-ID exterior styling isn’t among them. In contrast, people can recognize a G-Glass from a sniper's distance; it's a classic, inimitable design statement. Pull up to a valet stand alongside the Bentayga, Cullinan, and Urus, and it's the G-Wagen that will draw the most attention.

This G550 reminds me of the Jeep Wagoneers and International Harvesters my late father used to drive, only with interior luxury on par with any Range Rover, and not far off the Bentley’s mark. Price aside, if you love old-school trucks, it's impossible to drive this thing and not come away charmed. (The Kardashians will take three, but don't blame Benz for that). And one thing's certain: With the success of its 2.5-ton cash cow seemingly assured, Mercedes won't be waiting another 40 years for the next redesign.