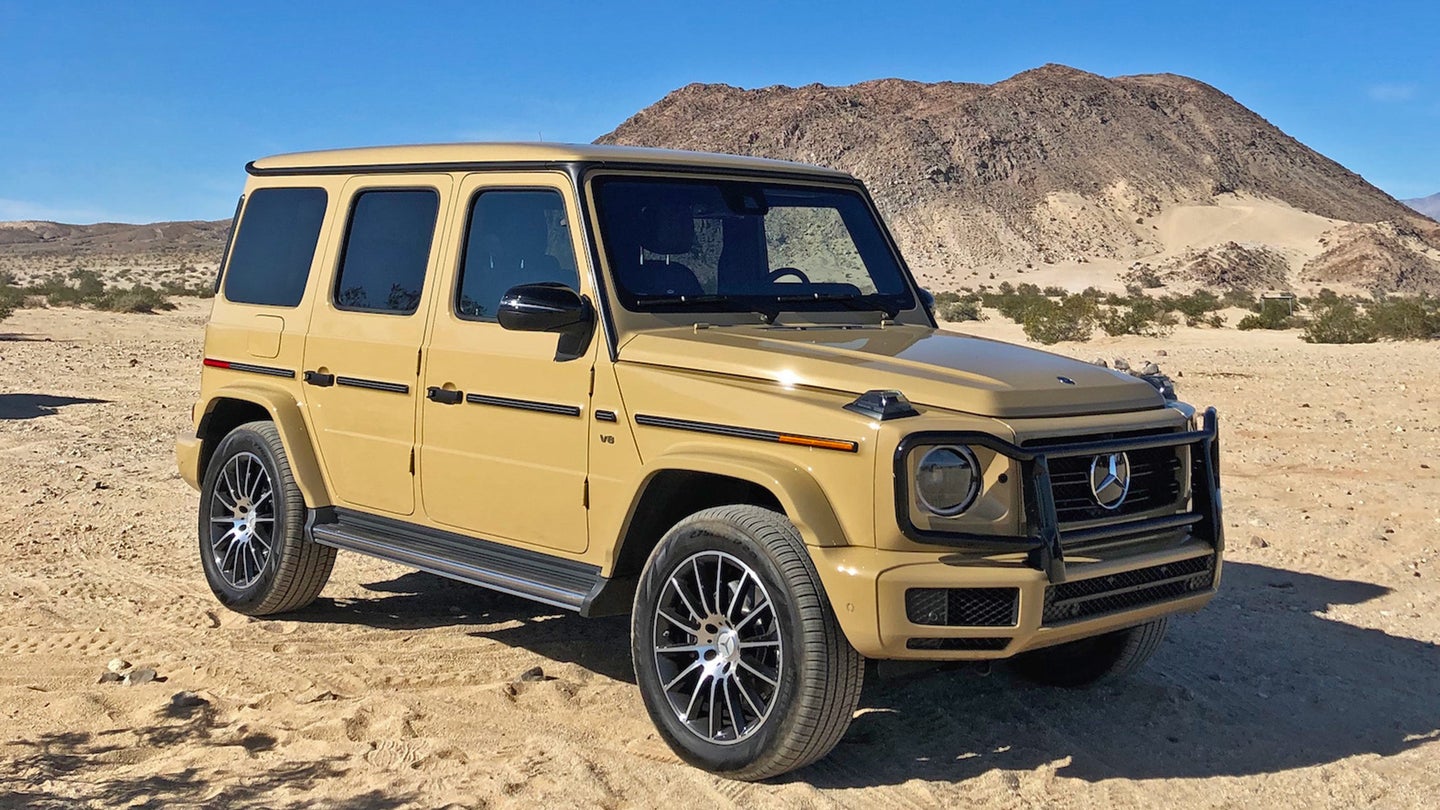 There is nothing I don’t love about the 2019 Mercedes-Benz G-Class. Though it has, for the first time in its 39-year production history, been refashioned from the shoes up for this model year, the G-Wagen has the same butch profile and macho frivolity for which we have such affection: the boxy look, the two round headlamps, the dramatic verticalities, the macho bullbars, that shiny rear-mounted spare tire.

The Geländenwagen (basically, German for "off-roader") remains indifferent to radical innovation or new-timey ideas like mobility and autonomy. The G-Wagen has a piss-off-if-you're-too-poor-or-stupid-to-buy-me vibe that appeals to the same part of me that eats a 32-ounce porterhouse and then collapses on a leather sofa: You only live once, not for long, and everyone dies alone.

This year, Mercedes is selling a mostly all-new G-Wagen. I have driven it on the streets of San Diego, over sand dunes in a California State Park, and through the blanched and denatured coastal hills of Orange County. Like an aficionado, I luxuriated in its seats—not the most comfortable of Mercedes seats (that would be the S-Class thrones)—and ran my hand over leather hand-sewn by a roomful of women. (Seriously, I've been on the factory line: the people sewing the leather seats are all women.)

Do I still love it? Of course. I love it because there is nothing else like it on the road, and because I imagine the factory line in Graz, Austria, will be churning out G-Wagens long after humanity has departed this planet.

To truly appreciate the unique DNA of the G-Wagen, first, a little history: According to legend, the G-Wagen was commissioned by the Shah of Iran in 1975. The Shah, who was an investor in Daimler, wanted a military vehicle with a little more panache than a standard-issue Jeep.

The G-Class was already in development as a partnership between Daimler and Steyr-Daimler-Puch AG, a heavy builder based in Graz. The product developers wanted to create something with the reliability, durability, and off-roading chops to meet day-to-day industrial, municipal and military use in basically any environment, on the one hand. And on the other, they were aiming to produce a fully equipped, comfortable model for carrying both people and goods on normal roads, and one that would also appeal to customers looking for an exclusive leisure vehicle.

So when the Shah dialed his phone, Mercedes answered, and the carmaker took the concept it'd been developing with Steyr and fired up a factory line in Graz, Austria—the same factory line where G-Wagen is still being built 39 years later—and churned out 20,000 Persia-bound military-grade SUVs.

At least, that’s how the legend goes.

According to Daimler's official line, the Shah of Iran was a "major shareholder" in Daimler-Benz in 1975. This is when he commissioned the light all-wheel drive off-roader for the Iranian military. I have my doubts. There is no record of the Shah actually owning a stake in Daimler. In fact, according to this April 10, 1975, New York Times report, the Shah was "thwarted" earlier that year "when he sought a similar piece of the prestigious Daimler‐Benz company, maker of the Mercedes automobile."

Either way, by the time the partnership in Graz started churning out completed Geländewagens, Iran was in complete upheaval. In February of 1979, the Shah fled into exile; by July he died, tragically having never driven a G-Class. Iran fell under the control of the Ayatollah and his mullahs, who, you might surmise, had little interest in taking delivery of the infidel Mercedes's lovely new SUV.

Honestly, at this point, who really cares if the legend of the Shah and the G-Wagen is real? It's a great story, and truly great stories use a kernel of truth to shape the tale into art. This SUV, which has been rebuilt from the shoes up for the first time since it came off the line in Graz, is as close to art as a truck can get. It's also still legit in every way: fitted in top trim with Mercedes' new dynamo workhorse 4.0-liter twin-turbo V8, it brims with power and bristles with elegant charisma, both inside and out. And while the designers at Benz have done away with some of the signature elements that have lent the G-Class its Euro-cowboy character, the new refinements come together nicely.

Little lost, little gained. It's a near draw that I'll gladly call a win.

The most noticeable changes to the vehicle are on the inside. If you know the G, you know it has always had the World's Most Annoying Cupholder, a good-for-nothing bolt-on basket that pinched the passenger's legroom and proved incapable of holding a cup. That's been torn off and replaced with standard in-console cupholders. There's also a new digital instrument cluster, complete with a 12.3-inch center display. Both are bonded to one glass piece, like in the E-Class.

What we feared most when Mercedes announced their plans to overhaul the G-Wagen is that the quirks and peccadillos that made the G the G would be engineered out. Historically, given the opportunity, carmakers evolve toward efficiency. And there's nothing efficient about this truck.

Mercedes was smart enough, for the most part, to agree. They found efficiencies in the important places—the engine, the displacement, the materials. But they held onto the components that makes this machine so great. The door handles, for instance. The sound and feel of the door handles are one of the most iconic sensations in automobile history: thumb on the round button, that extra bit of exertion to trip the latch, that loud and deeply satisfying mechanic clack as it opens and metallic whack as it closes. Mercedes planners did their research: That sound is what people think about when they think about the G-Wagen.

They also held onto the shiny aluminum spare wheel cover, the round headlights, complete with headlamp washer, and the passenger-side grab bar. They also kept an iconic component that was more complicated to design: the front, center, and rear differential locks. Those haven’t changed.

The interior is stripped down, simpler, with more standard Benz components. It is also significantly wider, with an additional 4.8 inches of beam overall and 1.5 inches more shoulder and elbow room on the inside. It is also 2.1 inches longer, stem to stern. That alleviates the notorious rear-seat crowding by adding nearly six inches of backseat legroom. It makes a difference—especially if your teenage kids are back there as you're stuck in O.C. traffic.

The G550 has a 4.0-liter biturbo V8 engine that pushes out 416 horsepower and 450 pound-feet of torque. It is peppy off the line, hitting 60 miles per hour in just 5.6 secs. The AMG G63 version—also packing a 4.0-liter biturbo—generates a more-adult 577 hp and 627 lb-ft of torque. This is the new G-Wagen. It has a curb weight of around 5,500 pounds (having shed about 375 in the rebuild) and the drag coefficient of a warehouse full of bricks, and yet somehow, the G63 goes from 0-60 in 4.5 seconds. That's sort of speed blistering that a little weight savings, a nine-speed transmission with a wide range of ratios for on- and off-roading—and, not to mention, $150,000—can get you.

On public roads, the body-on-frame G-Class has a nicely-matured ride. It has shed its tendency to be both noisy and jerky. Brand new adjustable dampers on the chassis have solved for unnecessary pitching and rocking.  Off-road, in the sand dunes, the low center of gravity and rigidity of the frame help it negotiate rugged terrain that literally not one single customer in the United States will ever experience. It can hit lateral angles of 37 degrees, and it can nail inclines that would scare off all but the most purpose-rigged SUVs out there.  And it has the right bells and whistles for normal use, and technology that Mercedes has led the way on refining, such as active brake assist, lane keeping assist, Distronic cruise control, a pre-safe system that anticipates impacts, and traffic sign assist, for those Orange County busybodies who like to text while driving.

The bottom line: the more things change, the more they stay the same. This may not be the same G-Wagen built for the Shah of Iran, but it's an SUV that has earned the right to tell a damn great story.