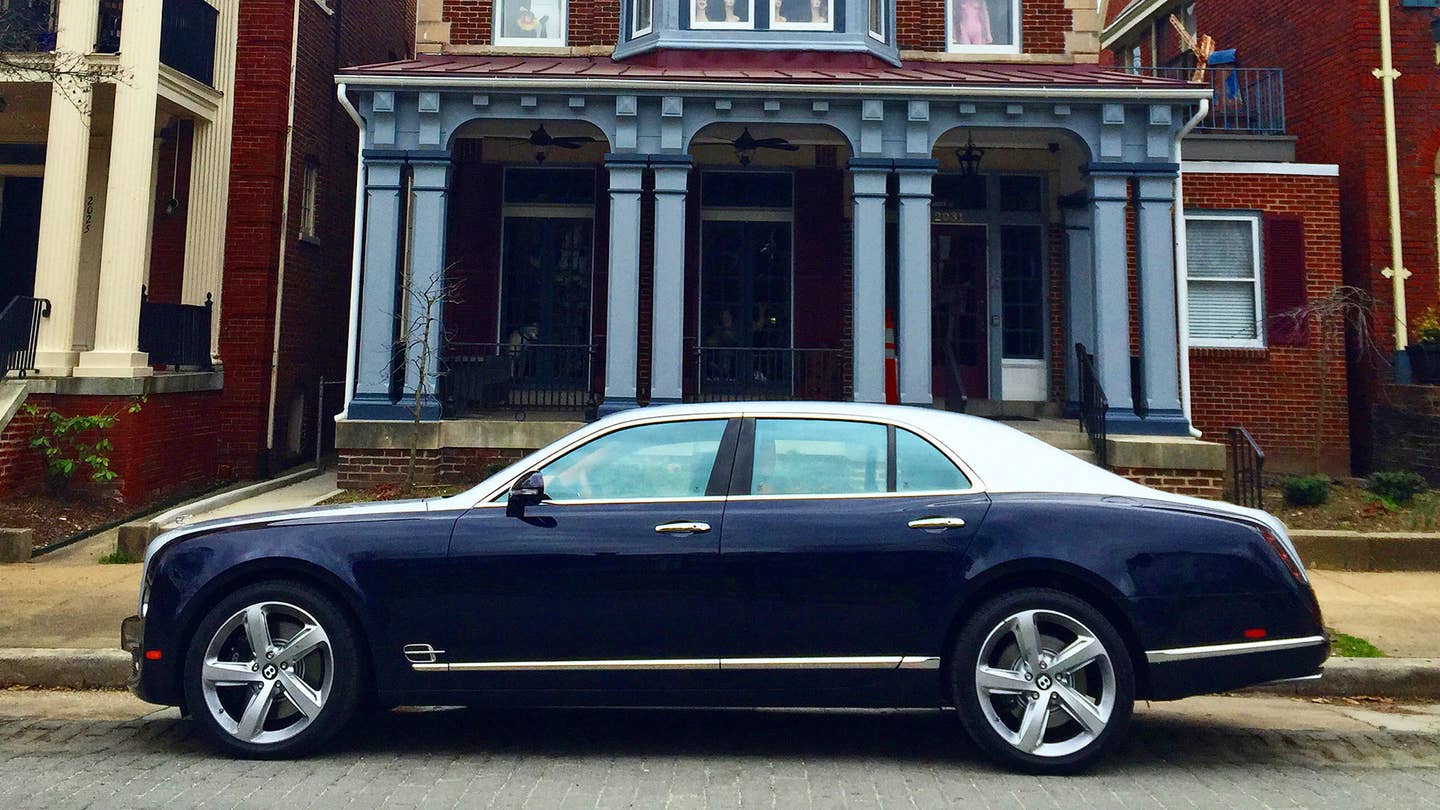 Welcome to Critic's Notebook, a quick and off-the-cuff collection of impressions, jottings, and marginalia on whatever The Drive writers happen to be driving. Today's edition: The Bentley Mulsanne Speed.

A rep for Rolls-Royce once elucidated the difference between his six-figures wares and Bentley’s: “You drive a Bentley,” he scoffed, “But you’re driven in a Rolls.” His slight missed the mark, because I prefer driving—one Winged B, please. A few weeks ago, Bentley delivered me a brand new Mulsanne Speed in a stately two-toned silver and blue colorway that left it looking like an absurdly expensive police car, for patrolling Greenwich or Dubai. That handmade, five-day paint job ($13,965) partially explains the lingering stares, though a rocketing, 18-foot mass of stamped metal, burled specialty wood and supple cow hides would be pretty mesmerizing bare. It should be, for $401,000.

With the Flying B firing South on I-95 to Richmond, Virginia, myself, my ladylove and our chihuahua settled in for the 400-mile trek. It’s a comfortable machine for a longer haul. The seats are heavenly, a product of more than a dozen cattle skins sourced from regions of the world where there are fewer mosquitos, meaning fewer imperfections. Before the hides are cut, a computer scans each piece to ensure zero defects. The final diamond-pleating pattern is hand-stitched, as is the piping ($2,430). Overkill? Yes, though the thought leaves your mind after four hours. You'll cheer the seat massager when it breaks up boring expanses of highway by walloping your back into tender submission.

Let’s talk about that prodigious, 6.75-liter, twin-turbo V8 for a moment. Bentley wishes the Mulsanne to be synonymous with words like “pinnacle,” “craftsmanship,” and “detail," all of which are evident when yanking the knurled gear lever into "Sport" and mashing the drilled alloy accelerator into the Wilton deep pile carpet ($1,445). But a better descriptor is “freight train.” The Speed package ($11,407) ups the performance to 530 horsepower and 811 lb-ft of torque, twist the likes of which is found in the Pagani Huayra or Koenigsegg Agera. Those are unsubtle machines, though, while the Speed smoothly surges, mounting but never crescendoing.

Floor it and the 8-speed transmission drops down once to get you in the thick of the power band. The nose jerks skyward, like the bow of a Cigarette boat, taps open wide. That means this 6,000 pound whale sprints to 60 in 4.8 seconds. With the smooth ride and noiseless cabin, it’s hard to gauge your speed. Best to trust the speedo, not your senses.

The car had some driver aids, including adaptive cruise control ($3,895) and side cameras ($1,230), but the ultimate crash avoidance feature wasn’t an add-on. It was the fact that it was a Bentley. People always yield. Upon spying us, one gent in a Ford Raptor on the Belt Parkway dropped back to give us a thumbs up, then sped up in order to break traffic for us for several miles, issuing a salute when he exited.

Among the legion of admirers—the tally of videographers surpassed two dozen in 12 hours—there were a few who thought I’d be down for an interstate race, screeching up in Hoonigan-stickered Focus STs or Mitsubishi Mirages, laughable spoiler affixed. They’d wave and blip their paltry engines. Only the dog paid attention, roused from sleep. In a Mulsanne, you don't engage.

(In part, because you can't spare the gas. The sticker alleges 12 mpg in the city, and 19 on the highway, though I observed between 5 and 10 mpg while romping in sport mode. Comfort mode yielded a thrifty 18. Still, to own a Mulsanne Speed is to be on a first name basis with every gas station attendant in a 40 mile radius.)

Reaching my girlfriend’s parents’ home, her parents emerged, mouths agape. Her family is British, living stateside but pining for home. We thought bringing a bit of England to them would brighten their day. Mission accomplished, though it took some coaxing to convince her mom that it was acceptable to put her feet down: “Why? I can just hold them up. This carpet is too nice.”

The rest of their quiet cul-de-sac was flabbergasted. A family of four climbed in for a quick spin, stroked the solid walnut waist-rails and remarked, “This must be what a private jet is like.” A fellow from across the way ambled up in his Ram Rebel, quipping about racing for pinks. The neighbor on the left—proud owner of a pristine 1976 Bronco and a 1956 Tri-Five—nearly drooled, touching the various finishes with reverence.

After taking the last guy for a whirl and showing off that 0-60 shuffle—“Whoa, boy. She’s lightning!”—the Bronco owner asked if I could pop the hood. I obliged but warned him much of the engine was covered. His face dropped. “I guess she’s not made for wrenchin’, huh?” No, sir. The boys at Crewe, who spent more than 500 man-hours to get the Speed built, don’t want you under the hood. They want you behind that wheel.