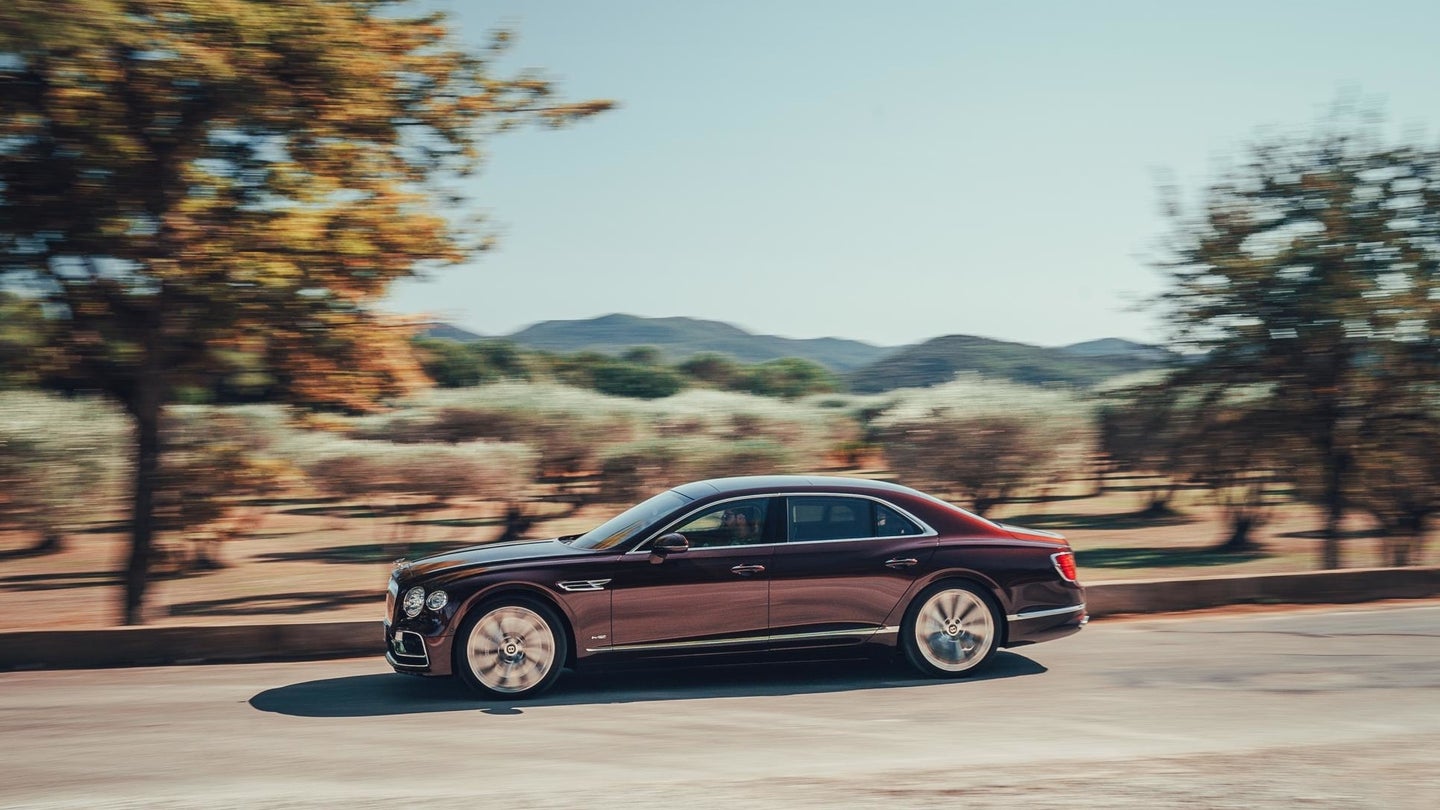 Facing another 45-minute car ride at the end of all that would be enough to put anyone in a state of utter exhaustion, but through the airport’s exit sits the 2020 Bentley Flying Spur, silently idling. Slump into the calfskin rear seats with intent, massage function at full shiatsu, and you can't help but melt into the porcelain-smooth hide. Gliding away from a stop, the fatigue lifts like the morning fog, and it's crystal clear that Bentley's finally made the Flying Spur worthy of the "Flying B."

The 2020 Bentley Flying Spur, By the Numbers

Accouterments Fit for the Prince of Monaco

While prior Flying Spur generations felt rich enough, subtle reminders of the car's provenance in the Volkswagen empire seeped through the quilted leather, brushed aluminum, and warm-toned wood. You’d find an indicator stalk from a Golf, an out-of-date infotainment system, some dreadfully common plastics, and a number of other shined-up pieces from the VW parts bin. And you just knew Bentley could rival Rolls-Royce in exclusivity if given the funds.

The funds have finally been delivered.

Speaking to The Drive, Bentley's Head of Interior Design Darren Day said the design brief for the Flying Spur was “Future Luxury,” meant to maintain its lavishness for decades beyond a modern car's traditional lifecycle. Anchoring that ambition, and in a callback to historics like the original 1952 Flying Spur, wood and metal are the main ingredients in the 2020 model. Employed throughout, the materials come through in knurled aluminum bezels; weighted, hand-carved wooden buttons; and the brightwork around the analog dashboard clock. There’s forceful resistance behind each knob, dial, and switch, so much so that you half-expect to hear a camera’s shutter with every push. Other touchpoints in the 2020 Flying Spur feel truly worthy of the Bentley marque, padded and polished six ways from Sunday. 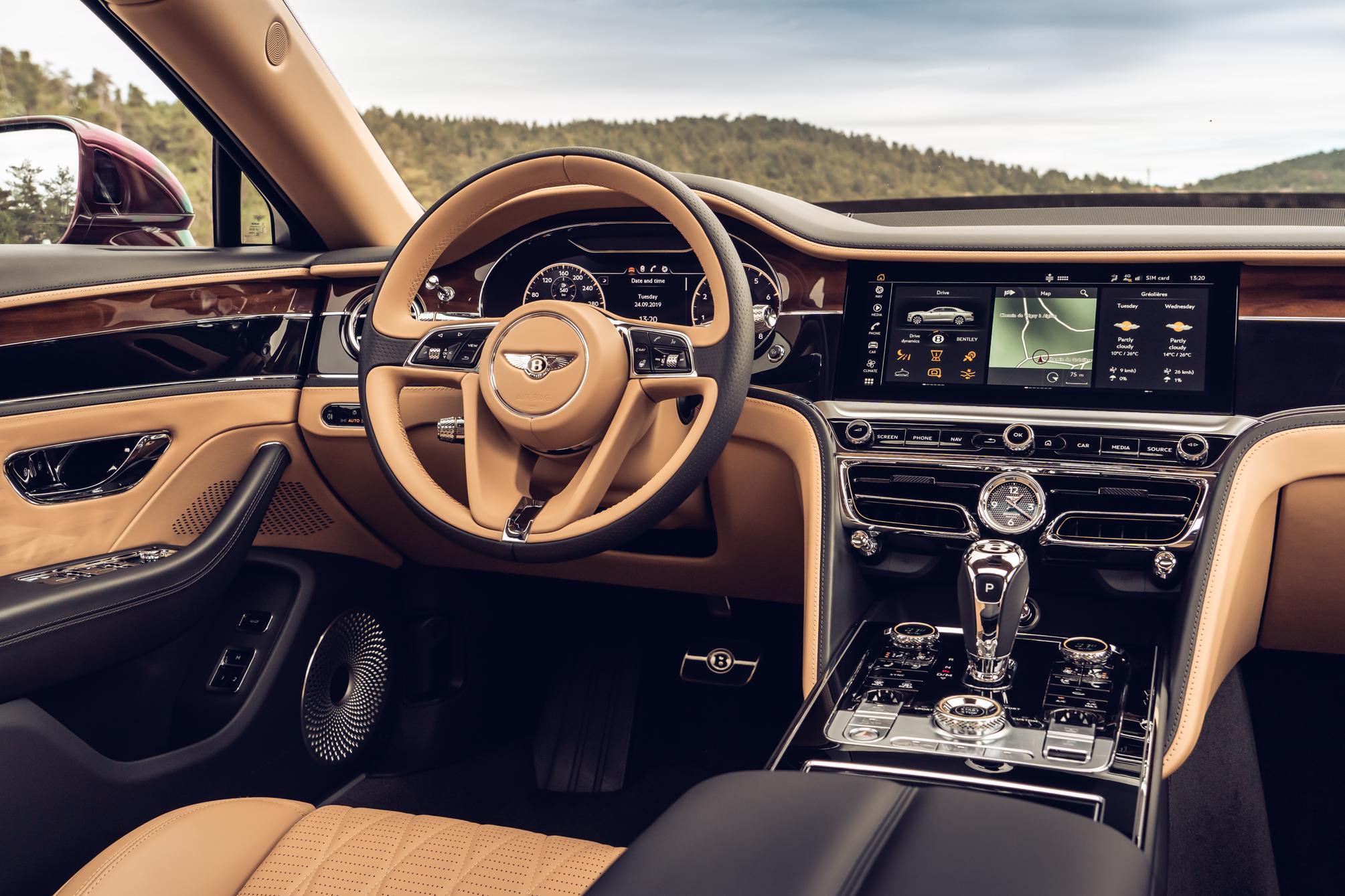 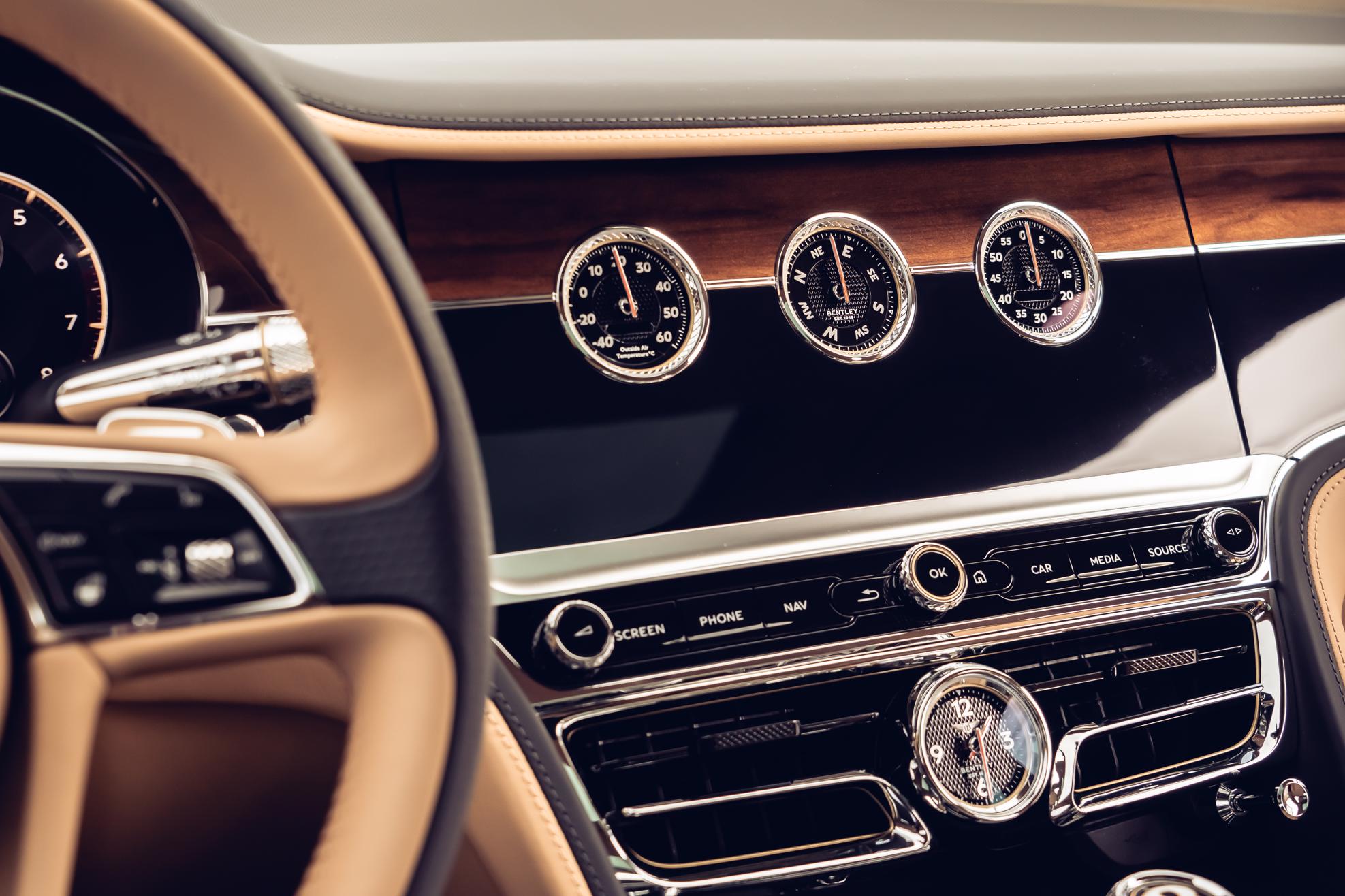 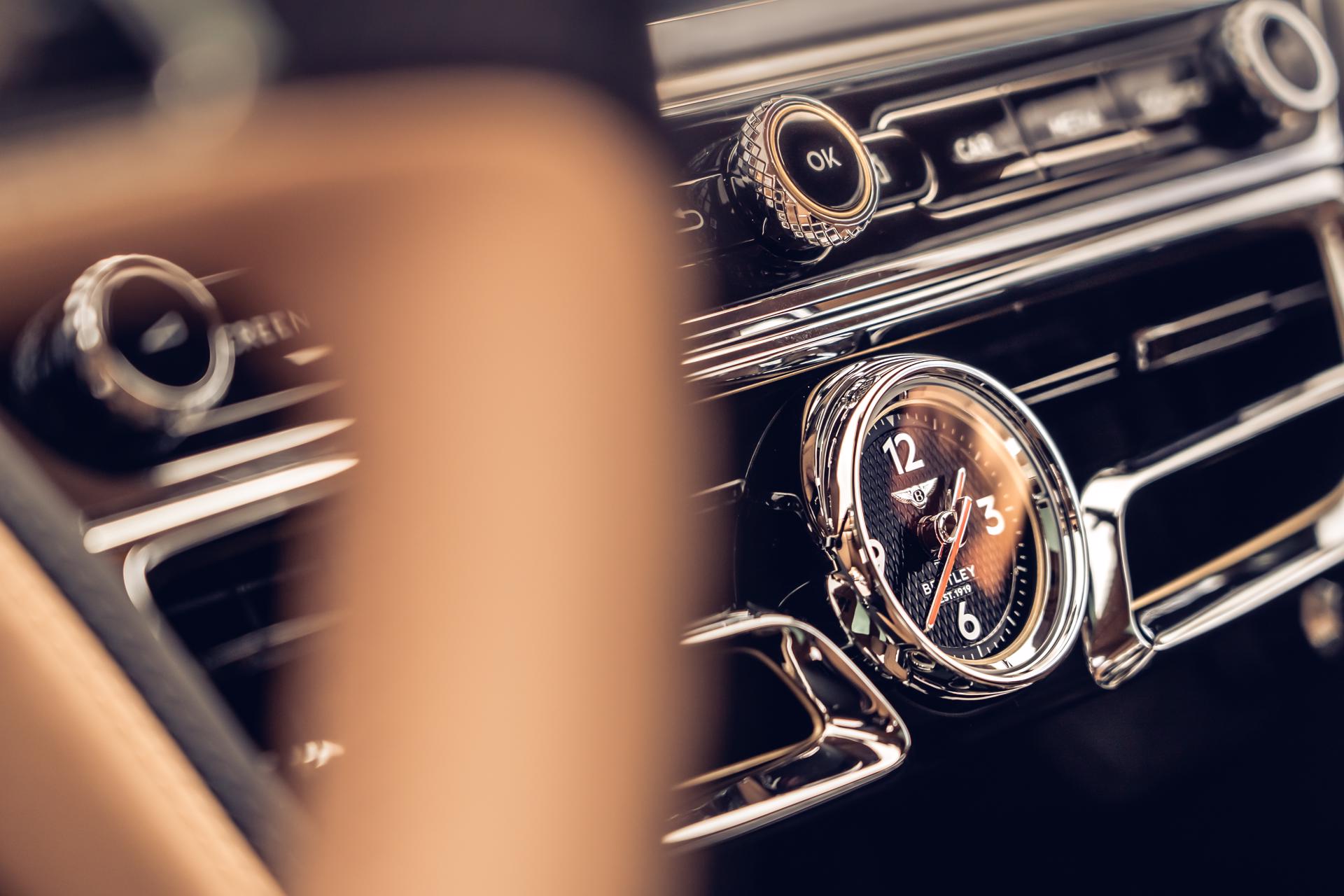 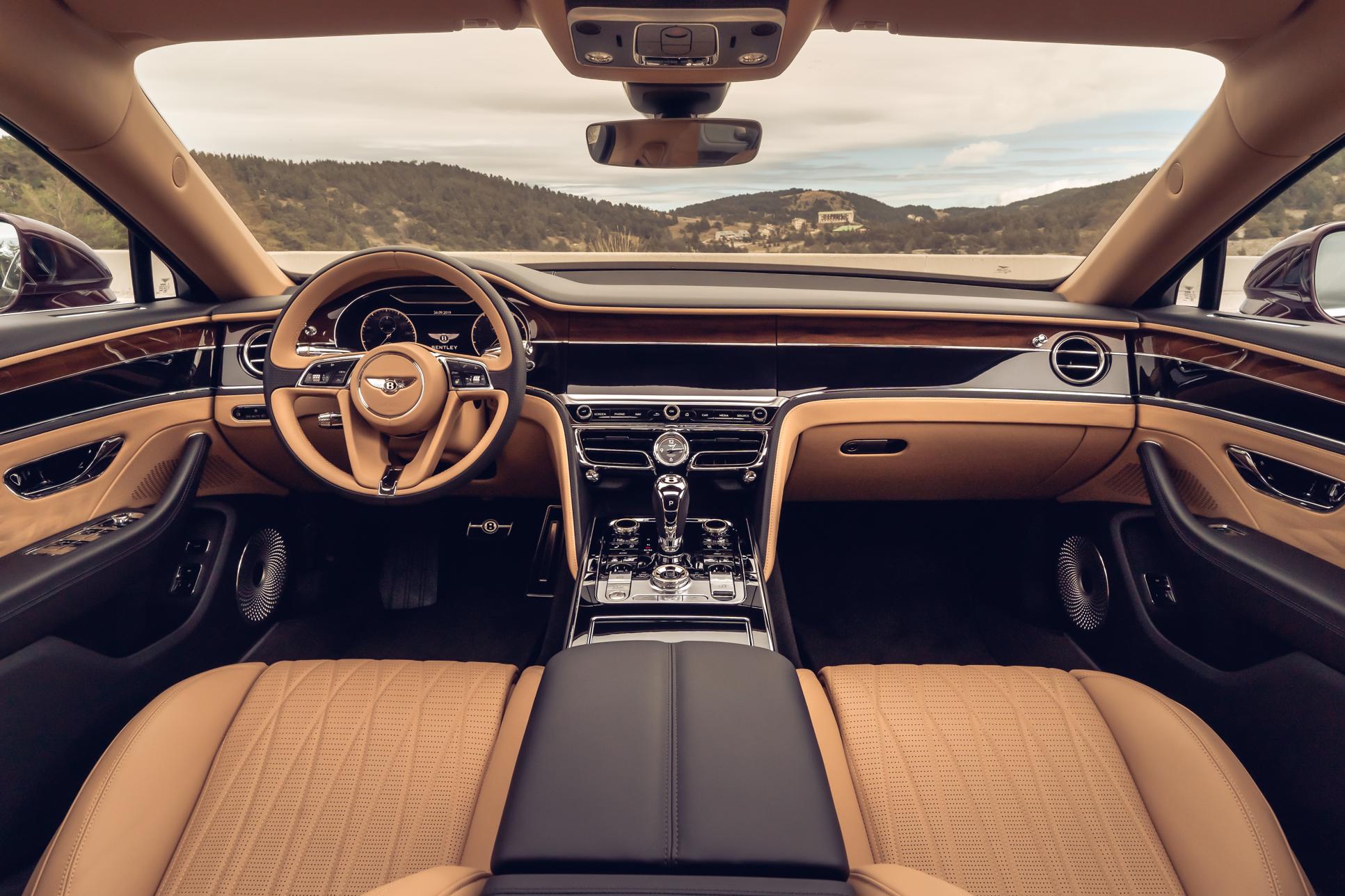 Bentley’s Rotating Display, seen in the new Continentals, furthers the timeless goal by literally flipping the center of the dashboard between a 12.3-inch HD display, a trio of analog dials (time, outside temperature, and compass), or a full-length, blank wood veneer panel that's sure to satisfy your inner minimalist. And like a teaspoon twirling around a teacup’s enamel rim, the Flying Spur’s seats pull you into the Sunken Place—but you know, less maliciously. Up front, multi-way adjustability allows for Saville Row fitment for either driver or passenger. Heated, cooled, and adaptive bolsters keep each person stable and at the perfect temperature. Multi-function massage programs come standard and will leave you tempted to drop a $30 tip in the cupholder.

Fittingly, things are even better in the back. If they're not blissed out in those opulent recliners, rear passengers have access to the Flying Spur’s systems via a seat-mounted screen or a removable remote control integrated into the rear-seat center console. Popped out, you can close the rear blinds, sun-roof, and change the HVAC system. You can also input destinations and adjust the car’s media.

A champagne fridge is still available. Praise be.

But by far the most noticeable design improvement has to be the 2020 Bentley Flying Spur's obsidian-sharp crease lines along the body. Bentley credits these expensive-looking ridges to its new “Superforming” aluminum shaping process, which heats the metal to over 500℃ and then presses it into a mold. Panels are then laser-cut to shape and affixed to the extruded aluminum chassis. Once the car comes together, customers can choose from 17 standard Bentley colors. One-off hues can be ordered through Bentley’s Mulliner division—along with different styles of brightwork, trim, and personalization options to deliver a truly one-of-one creation. 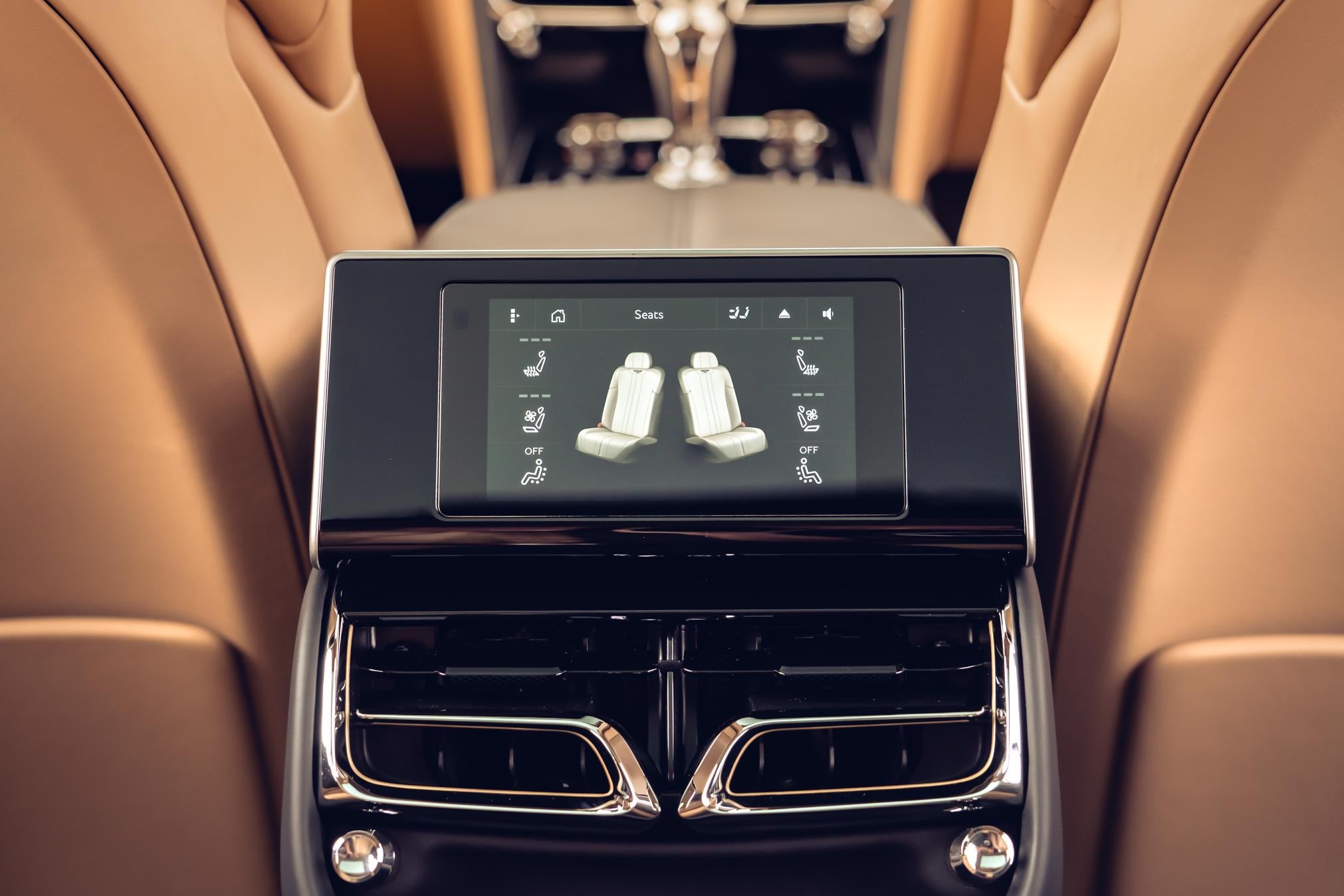 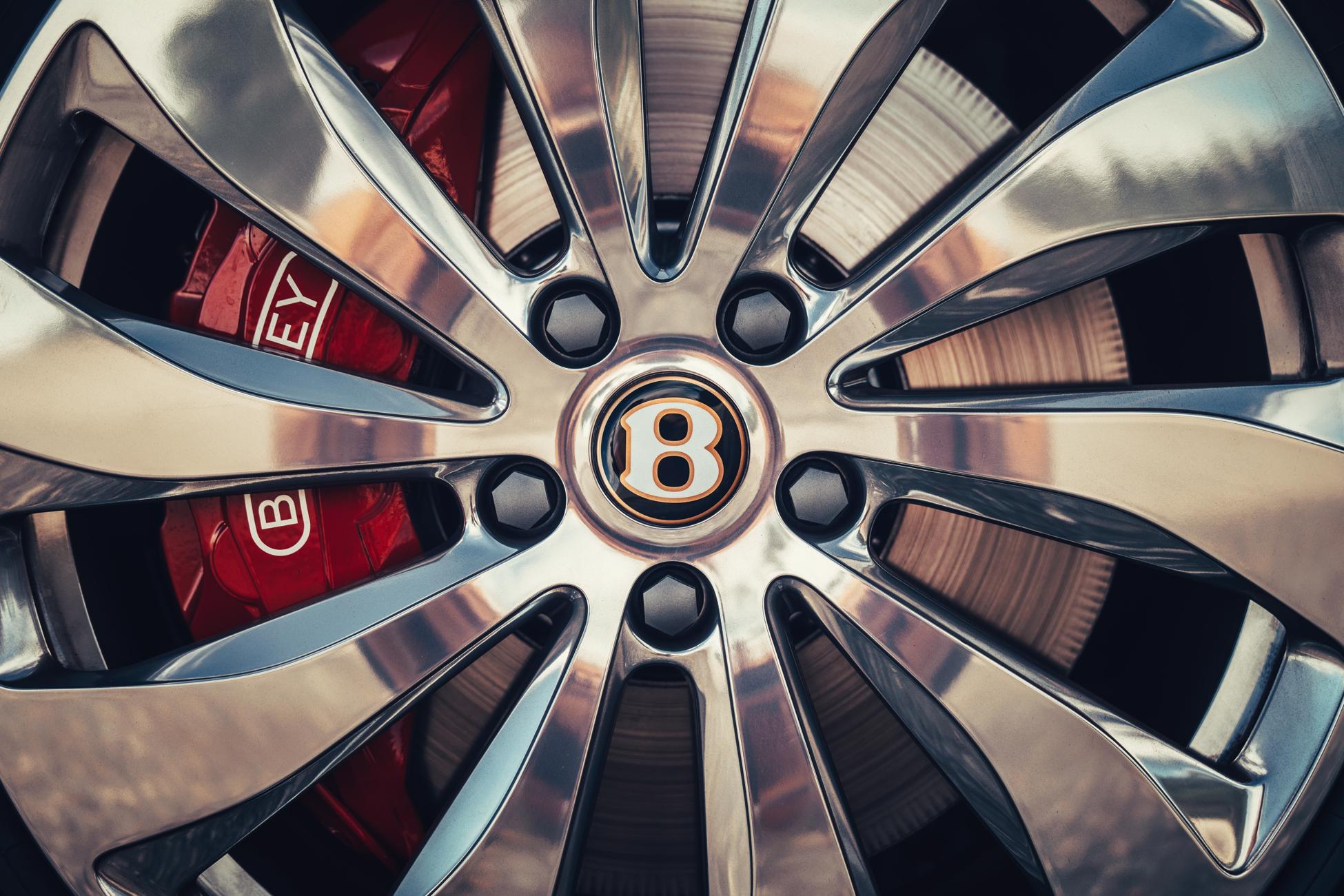 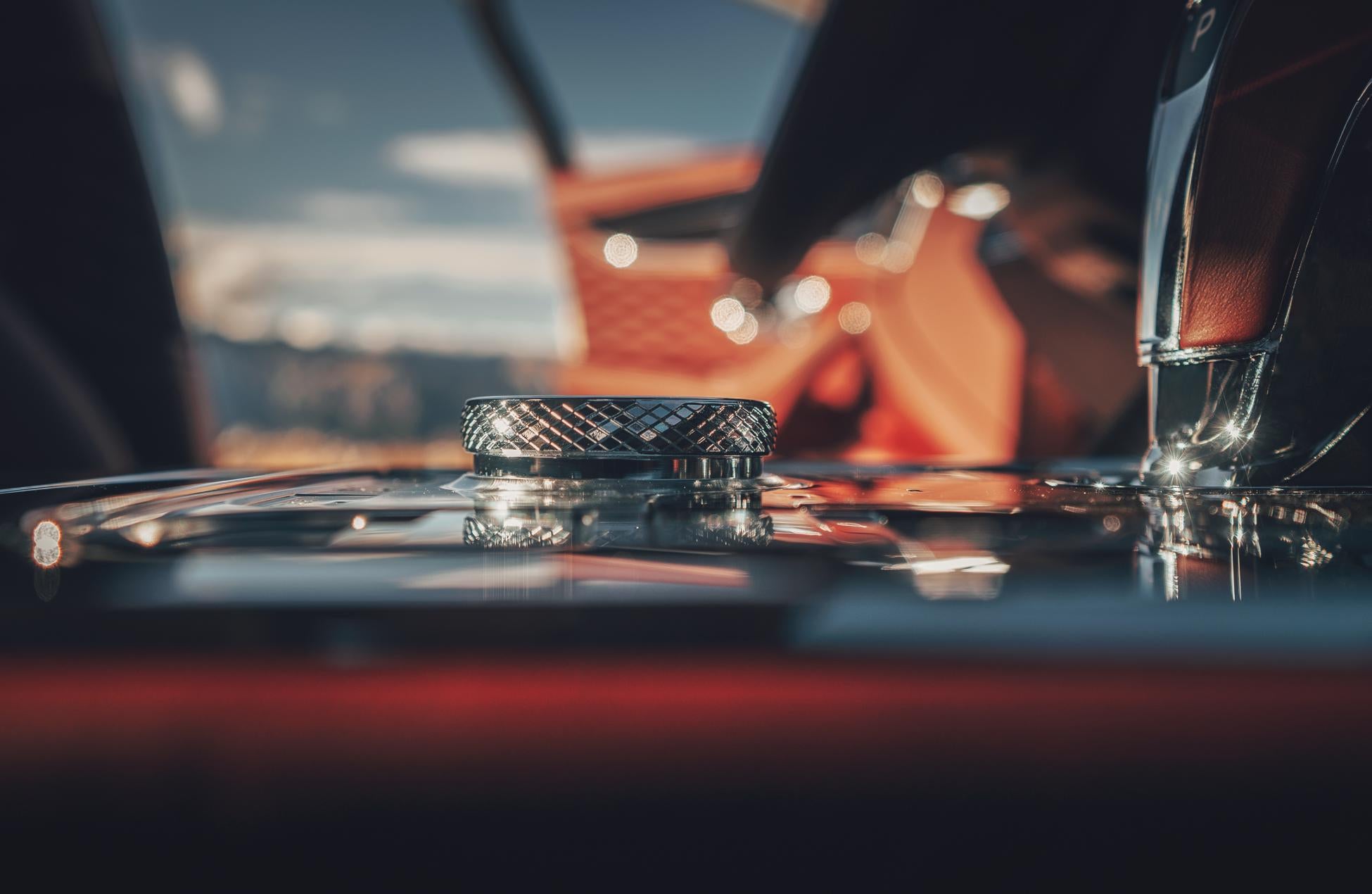 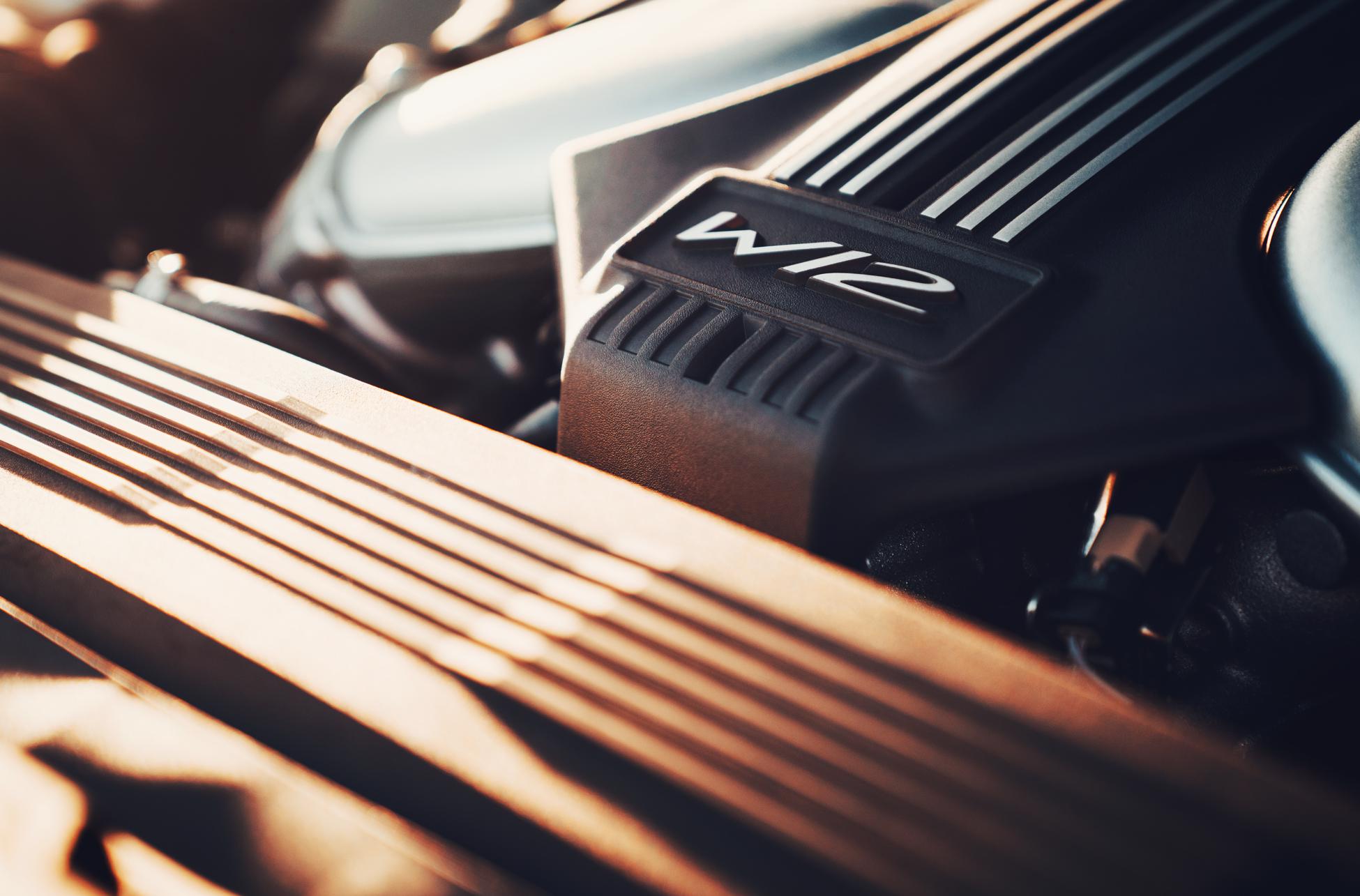 But ask any would-be mafia boss: Presence only gets you so far. In the end, you need the knuckledusters to back up the flex. Powered by a 6.0-liter twin-turbocharged W-12 engine, the Flying Spur warps the world outside its isolated interior with 626 horsepower and 664 pound-feet of torque. While the last car used a fixed Haldex-style all-wheel drive system with a specific torque split, the new Flying Spur is capable of divvying it up on demand, running primarily in rear-wheel mode and sending various amounts of power to the front depending on circumstances and the selected drive mode.

Zero to 60 mph happens in just 3.7 seconds, 100 mph in 8.2, and the Flying Spur will soar all the way up to a top speed of 207 mph—unquestionable supercar territory. Bentley’s ZF-sourced 8-speed dual-clutch transmission, all-wheel steering, torque-vectoring, and adaptive suspension all blur the line between sports car and grand tourer. So has Bentley produced a brogue shoe with Air Jordan moves? As proven on a test route including part of the famed Monte Carlo Rally course, the answer is yes.

Imagine forcing a Corgi through a Pringle’s can, but if the Corgi touches the can’s walls, it dies. Initially, that's the impossible care with which you'll approach the task of driving the massive 2020 Flying Spur on European B-roads, let along the Monte Carlo course. These capillaries are built for cars magnitudes smaller, not a rolling panic room that's 209 inches long and over seven feet wide (including the mirrors). But the big Bentley has two key size-defying tricks that make it far more adept at devouring twisted tarmac than you'd initially expect.

One is the adaptive suspension with three-chamber airbags that tighten up nicely on command; that system is augmented by the 48-volt adaptive anti-roll bars that further flatten the body through curves. The other is a new all-wheel steering setup, mechanically reducing the wheelbase by turning the rear wheels in the opposite direction during lower-speed maneuvering and in parallel on the highway. Combined, these advancements trick the Bentley Flying Spur into acting like an Australian V8 Supercar with seamless ease.

Put it Sport Mode on a road like the Monte Carlo course—a precariously narrow thing carved into the mountains of the Parc Naturel Régional des Préalpes d'Azur and lined with unforgiving stone—and it'll outperform sports cars half its size. Some care must be taken when you don't own the quarter-million-dollar vehicle at hand, of course, but its sheer competence and balance makes it impossible to resist apex hunting. Throw an uptempo track on that 19-speaker Naim sound system and you'll feel a magnetic pull between the throttle and the lambswool carpet. Go ahead, the Flying Spur can take it. The boosted 6.0-liter W-12 and 8-speed dual-clutch don't fire with the railgun intensity of a twin-turbo AMG V8; instead, it works with unflinching intention and force.

When not reenacting the Italian Job, this leather-lined cruise missile comes off Defcon 1 to offer traditional Bentley decorum. Comfort Mode slackens the steering bite while the adaptive suspension maps the road ahead to pre-cancel any imperfection. The ride is sublime, though the Flying Spur's heft returns as it sways to and fro like a yacht in Monaco's harbor. Still, the world slows and you're free to enjoy the pristine countryside, your company (or solitude), or some light classical music through the Naim stereo. Hours can tick by like seconds. Though chasing superminis across France is good fun, this is where driver, passenger, and car are happiest.

It's worth noting that the Flying Spur doesn’t have a wrong place to sit; great as it is to drive, its rear seats still beckon. Newly opulent in a way the previous generation just couldn't muster, they're massaged, heated thrones that you can tilt to what seems like impossible angles given the exterior dimensions. It's not quite a Business Class lay-flat seat, but it's getting close.

Rolls-Royce, Mercedes-Benz, You’re Both On Notice

Bentley once had a period where “Good Enough” prevailed with a line of ultimately forgettable cars. Beginning with the Bentayga and new Continental GT, and now the new 2020 Flying Spur, that’s no longer the case. There’s just this meticulous attention to detail heretofore unseen in new Bentleys, and no question whether it's worth the steep cost of admission. Though the Bentley Flying Spur's $214,600 starting price is heart-attack inducing for mere mortals—with a spendy options list longer than War and Peace—it lines up favorably next to a Mercedes-Maybach S 650 ($199,900), a Rolls-Royce Ghost ($311,900), or a loaded-out Porsche Panamera Executive Turbo ($163,400, but with a similarly-ambitious options ladder).

Got a tip? Want to talk? Email the author at Jonathon@thedrive.com or find him on Twitter @jonathon_klein.