Cars shouldn't be the focus of a little girl's birthday party, but the Bentley Flying Spur isn't most cars. 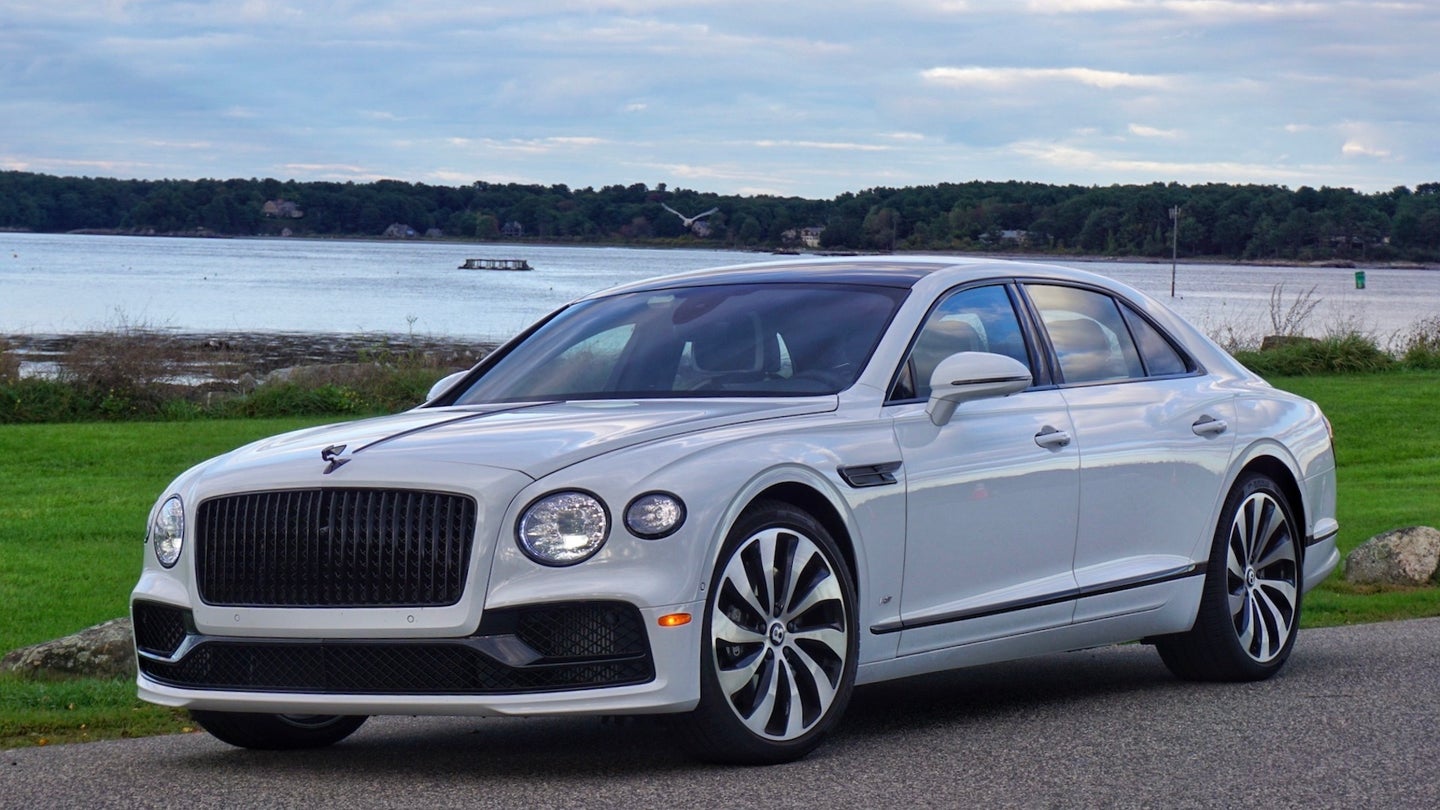 The happenings of 2020 changed this world, this is obvious. However, what isn't immediately obvious is the effect it all had on the tiniest members of society: Children. Schools were shuttered, playdates postponed, and of course, birthday parties canceled. As a dad of three, I look back on the past 18 months mostly with frustration and anger, knowing that it affected my children more than I'll ever understand. But for now, my youngest daughter is aching to get out there and make up for lost time. This desire of hers recently took us on a trip in a 2021 Bentley Flying Spur V8 to celebrate her 10th birthday—a trip that almost ended before it even started, and that would eventually teach us many things about life as we slowly move back toward normalcy.

A special trip requires special wheels. The Flying Spur is the pinnacle of the Bentley range, boasting the ultimate in automotive luxury and British craftsmanship. Unlike its rivals from Rolls-Royce or Mercedes-Maybach, however, the Flying Spur has the heart of a grand tourer, treating the driver to an engaging driving experience while spoiling the passengers with palace-like accommodations. Whether you're tackling a curvy country road or getting a shiatsu massage in the back, there isn't a wrong seat in the house.

It Gets Worse Before It Gets Better

Of my three kids, Josephine is the youngest and also the hungriest to see the world and experience new things. And she's also the fanciest, with a keen eye for fashion, architecture—and, of course, cars. At the height of the pandemic, she retreated into the internet and used her iPad as her window to the world. It became her life. Schoolwork, remote piano lessons, hours of Roblox with the same friends she dearly missed; they all happened on the same screen. As a parent, it became impossible to regulate screen time, knowing that by limiting it, we would essentially be taking away whatever little sense of normalcy and human interaction she was hanging onto.

After a couple of weeks, she'd finally made a decision: Legoland. Not just any Legoland, but the Legoland. The one in the brand's home country of Denmark. When I asked, "Why not the Legoland in Florida or California?" She answered, "Because Denmark is in Europe." Well played, child.

Despite enticing our children to dream big, Denmark would've been a total stretch in any year, let alone during a pandemic. That's when we found out about a brand-new Legoland in Upstate New York. An official plan was set in motion, with my wife and I crossing our fingers hoping that things would work out in the end.

Then, shortly before the trip, it happened. What seemed like a mild cold evolved into something more serious, and a visit to the doctor turned into a trip to the ER. Josephine's heart rate was abnormally high and her body temperature resembled a rollercoaster; normal at times and dangerously high at others. Ultimately, what we feared most became true: the COVID-19 test came back positive.

I could go on about what that time was like for her and the entire family, but I'd rather forget about the agonizing weeks that followed, mostly because I witnessed sights and experienced feelings that I'd never want to relive—nor that I'd wish on any parent.

A Light at the End of the Tunnel

Josephine stared at the Manhattan skyline from the rear window of the Flying Spur, bewildered by the skyscrapers. She was only three during her first visit to the city, so she didn't remember any of it. And unlike last time, when we made the trip in a Kia minivan, this time she was sitting pretty in the Imperial Blue back seat of a British supersedan, sipping a Frappuccino, pressing her face against the glass.

As we progressed into the heart of the city, it became evident that the Arctica White Flying Spur perfectly embodied the aspirational motif of our journey. A Bentley symbolizes success, and New York City does too—at least in our family. Manhattan was the very first city in America my father ever visited, and it's also where I lived for a couple of years while attending school. Combining these sentiments with a grandiose car like a Flying Spur—and not to mention my daughter's birthday—made for a special cocktail of emotions. And for Josephine, the sights and sounds around her had been nearly a year in the making, a year with more downs than ups, and one that got considerably worse before it got any better.

As we stopped at her favorite NYC bakery to pick up her birthday cake, I couldn't help but feel extremely grateful that we were just there. We were there because, despite the last-minute curveball, we were celebrating her life. And I could sit here and tell you that a car with the panache of a Bentley doesn't influence your emotions, but I'd be lying to you. From the exquisitely-stitched headrests to the granular stone veneer splashed across the cabin, it makes you feel as if you've arrived—albeit temporarily, in my case. Combine these feelings with the vibrancy of a city like New York, and life almost felt too good to be true. 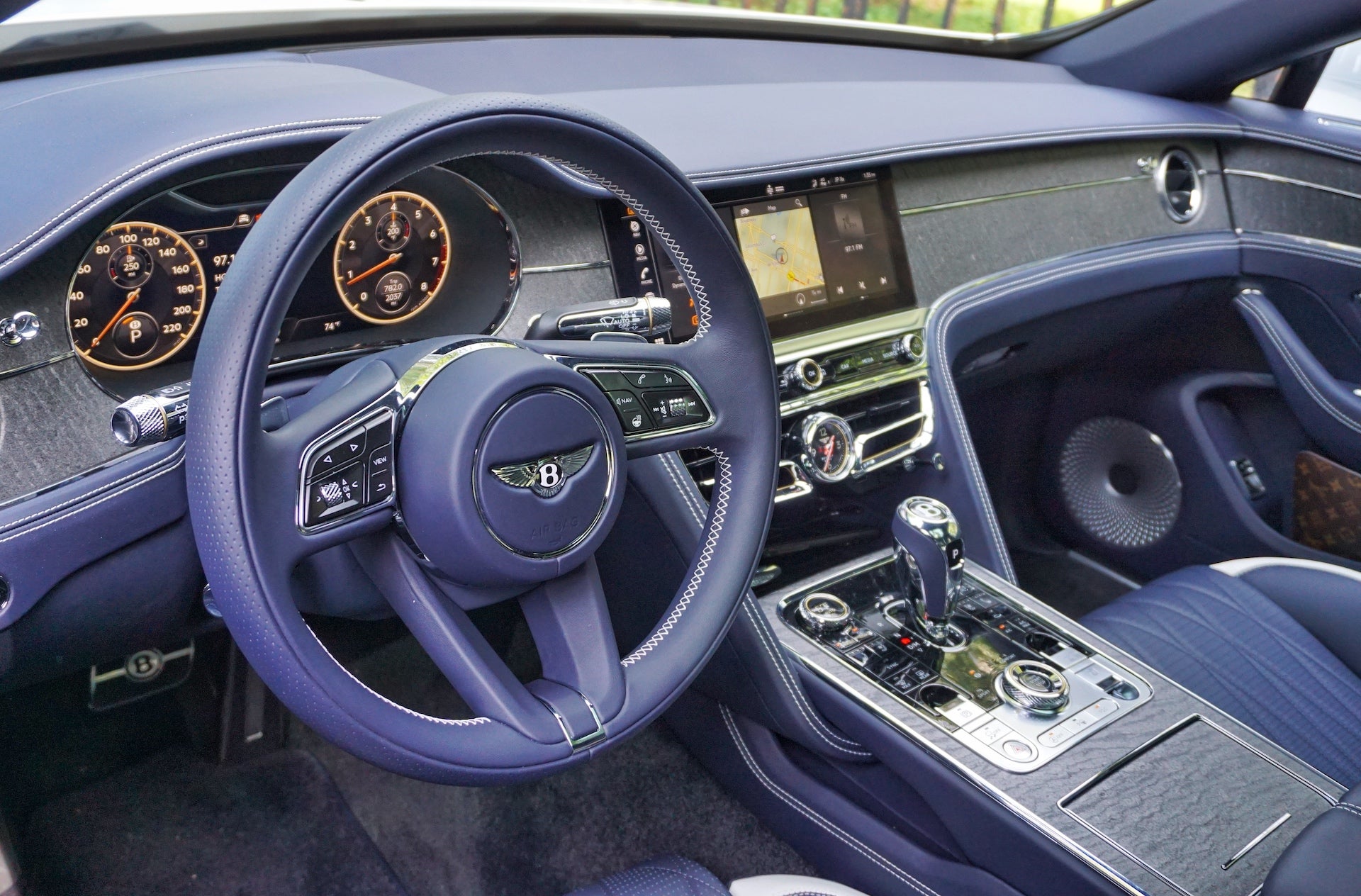 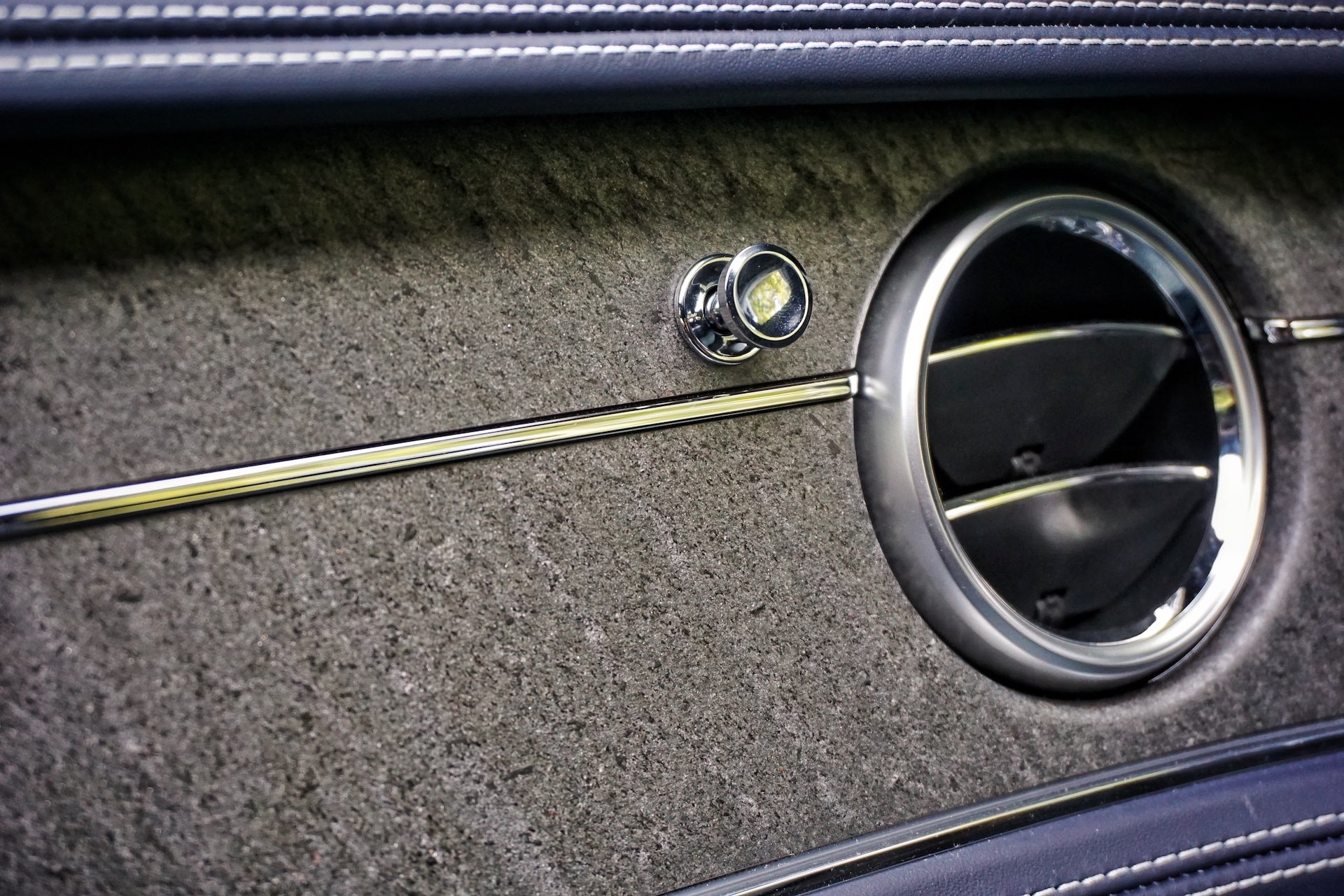 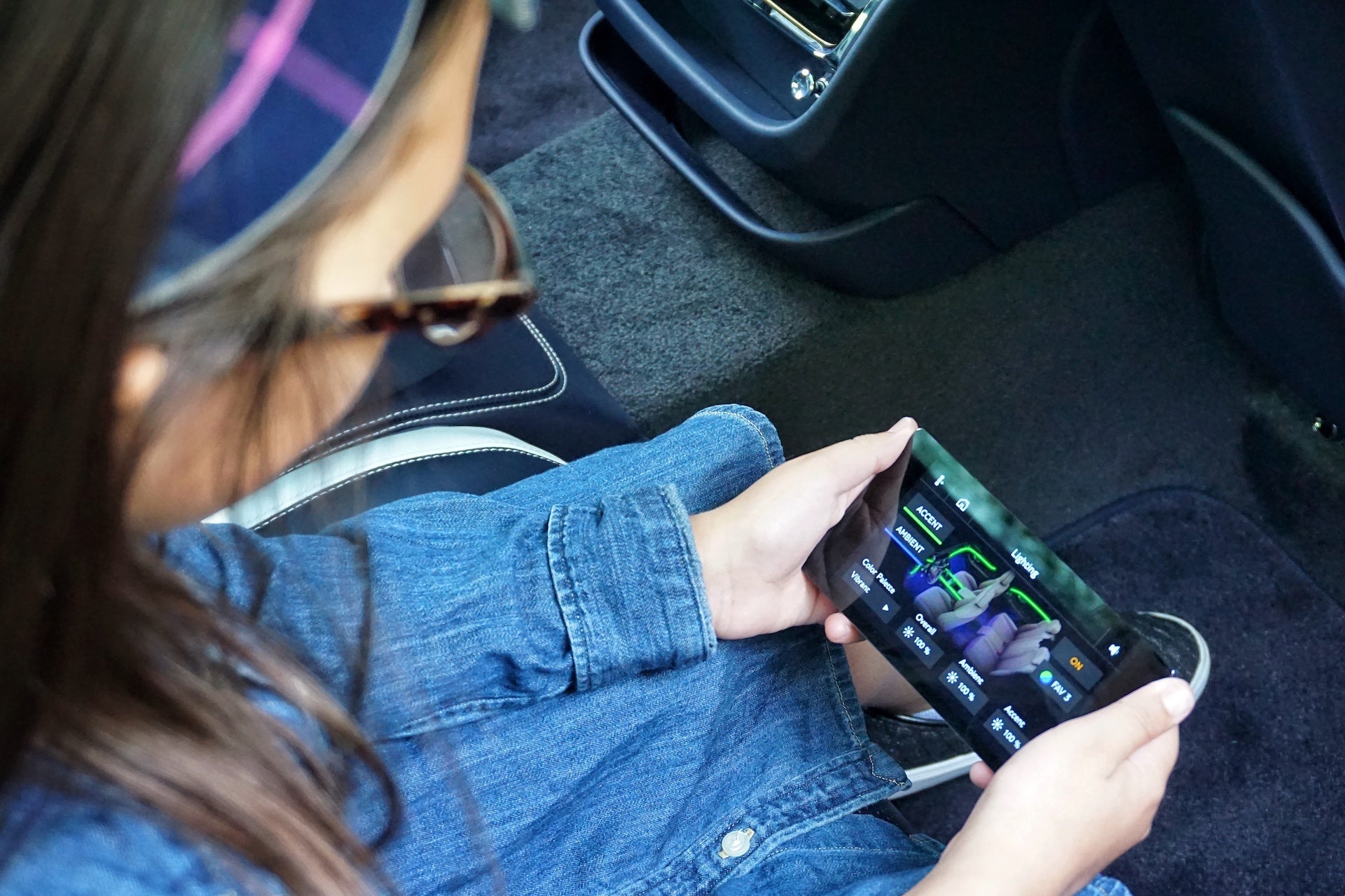 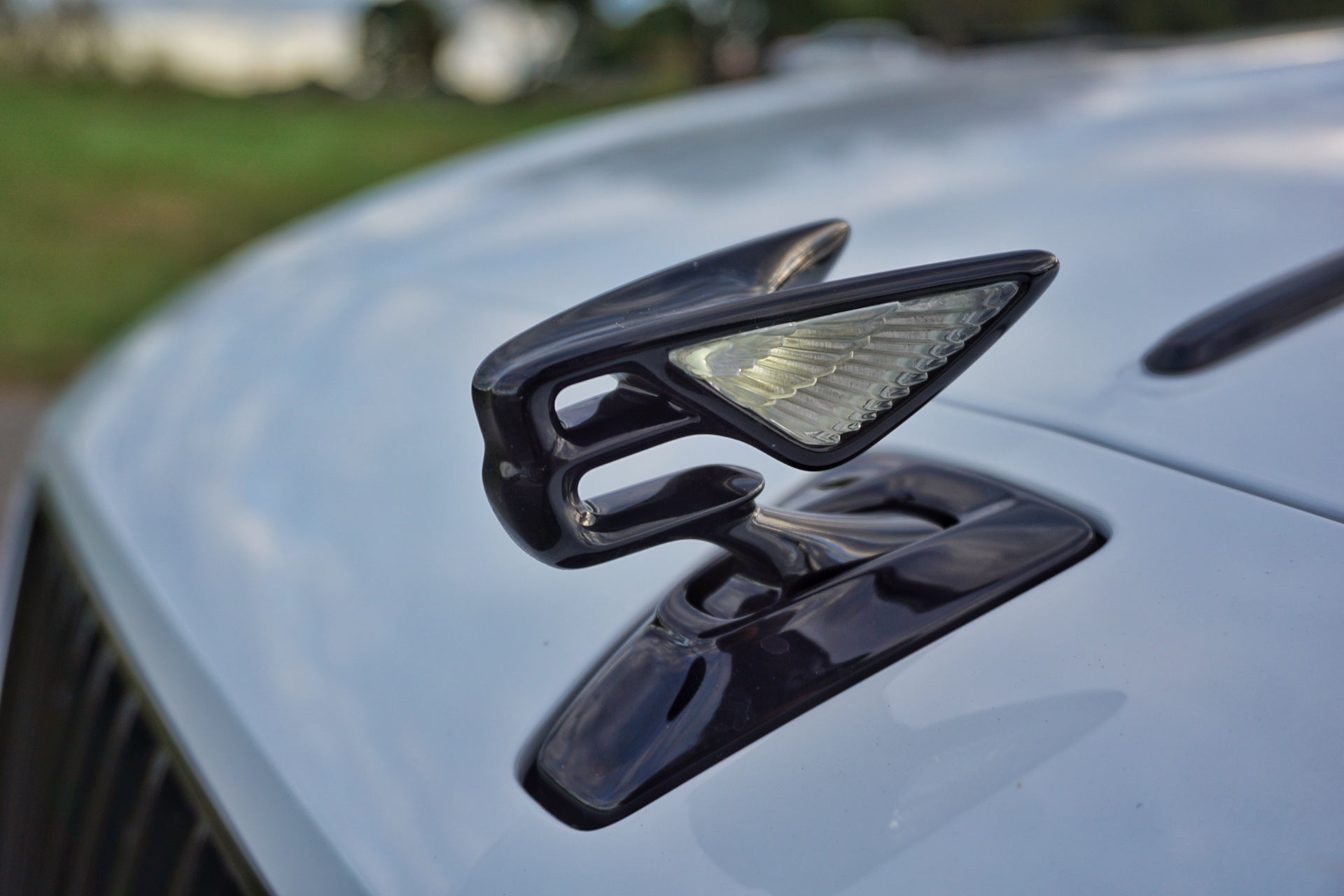 Over the course of the next five days, we were to carry out Josephine's birthday plan to the T. This involved making our way from NYC to Legoland in Upstate New York, then over to Maine, New Hampshire, Massachusetts, Connecticut, and back to NYC. And for the first leg of that trip, the Bentley was responsible for delivering her birthday cake in one piece.

The Flying Spur is, first and foremost, an ultra-luxury sedan, but one that's also meant to be enjoyed from behind the wheel, unlike a Rolls-Royce per se, where you really need a chauffeur to have the prime Rolls experience. Given its spec sheet, transporting the cake in a hurry wasn't an issue, because while this Flying Spur was the V8 model—not the W12—power wasn't exactly a problem. Propelled by a 4.0-liter, twin-turbo V8 engine with 542 horsepower and 568 pound-feet of torque, the "lesser" of the Spurs can accelerate from zero to 60 mph in just 3.5 seconds. Top speed? Just 198 mph. Clearly, then, I could drive with a sense of urgency, but would the cake make it unscathed?

At nearly a foot tall, the Milk Bar chocolate cake wasn't exactly super tall or super fancy, but it was certainly fragile, so despite rolling on 22-inch wheels, the three-setting adaptive air suspension kept cabin disruptions to a minimum—as any Bentley suspension should. Still, I spent the majority of our three-hour drive constantly gazing at the box, which my wife kept planted between her feet to keep it from sliding.

Despite tipping the scales at 5,137 pounds, the Bentley moved with agility through sweeping highways in rural New York, always offering plenty of acceleration to pass less-noble machinery hogging the left lane. Every movement exuded confidence at the wheel, whether it was the transmission quickly dropping three gears to thrust the car forward, rolling into a sharp turn, or stepping hard on the brakes. The Flying Spur always felt strong.

While I'm sure that engineers in Crewe already have benchmark tests to measure in-cabin stability and passenger comfort, I'm compelled to suggest adding the Cake Test to the list. Or at the very least, know that their precise tuning and attention to detail helped make a certain little girl's birthday a happier one.

After everything 2020 and 2021 had thrown at us, we had finally made it to Legoland. Not the one in Denmark, but Legoland nonetheless. Josephine's perseverance had paid off, and her dream had finally come true. She was happy, I was happy, we were all happy. And as the Lego people say, "Everything is awesome..."

As you'd expect, almost everything at the park is made from actual Lego bricks or built to look like it's made from them if it's something really big. The bushes, the flowers, the trees, the signs, the buildings, the street lamps, everything looks like it came out of a Lego movie or video game. But if you're a gearhead, Legoland is a very good place to be.

Many cool vehicles are made of Lego bricks, from small sports cars to large sedans, fire trucks, and even driveable go-karts. It's definitely a place where car nuts can have fun spotting the different builds. There's also a 4D movie theater showing a car chase film, where crazy-interactive seats and special effects make you feel the wind in your face, splashes of water, and vibrations of the car. 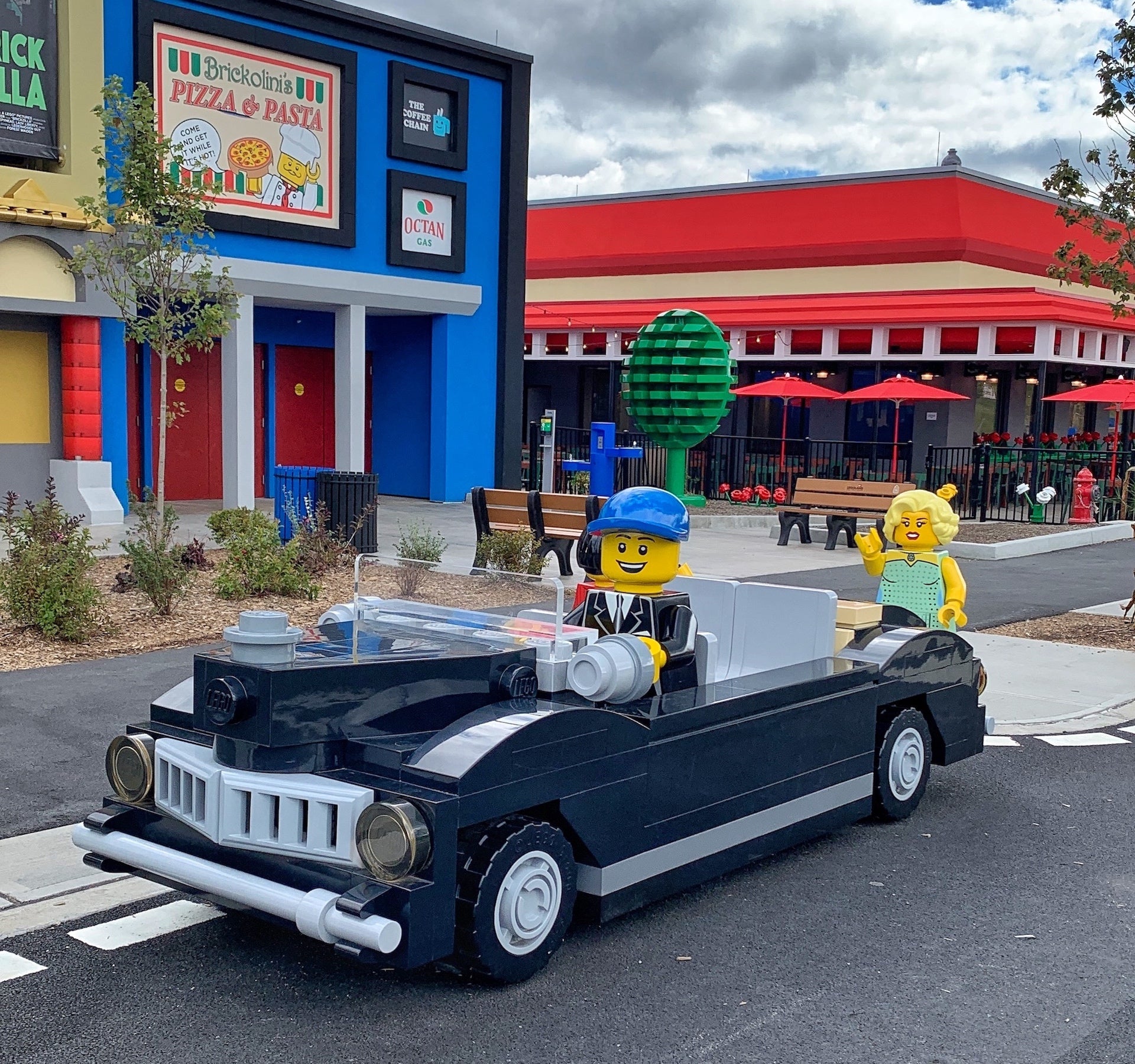 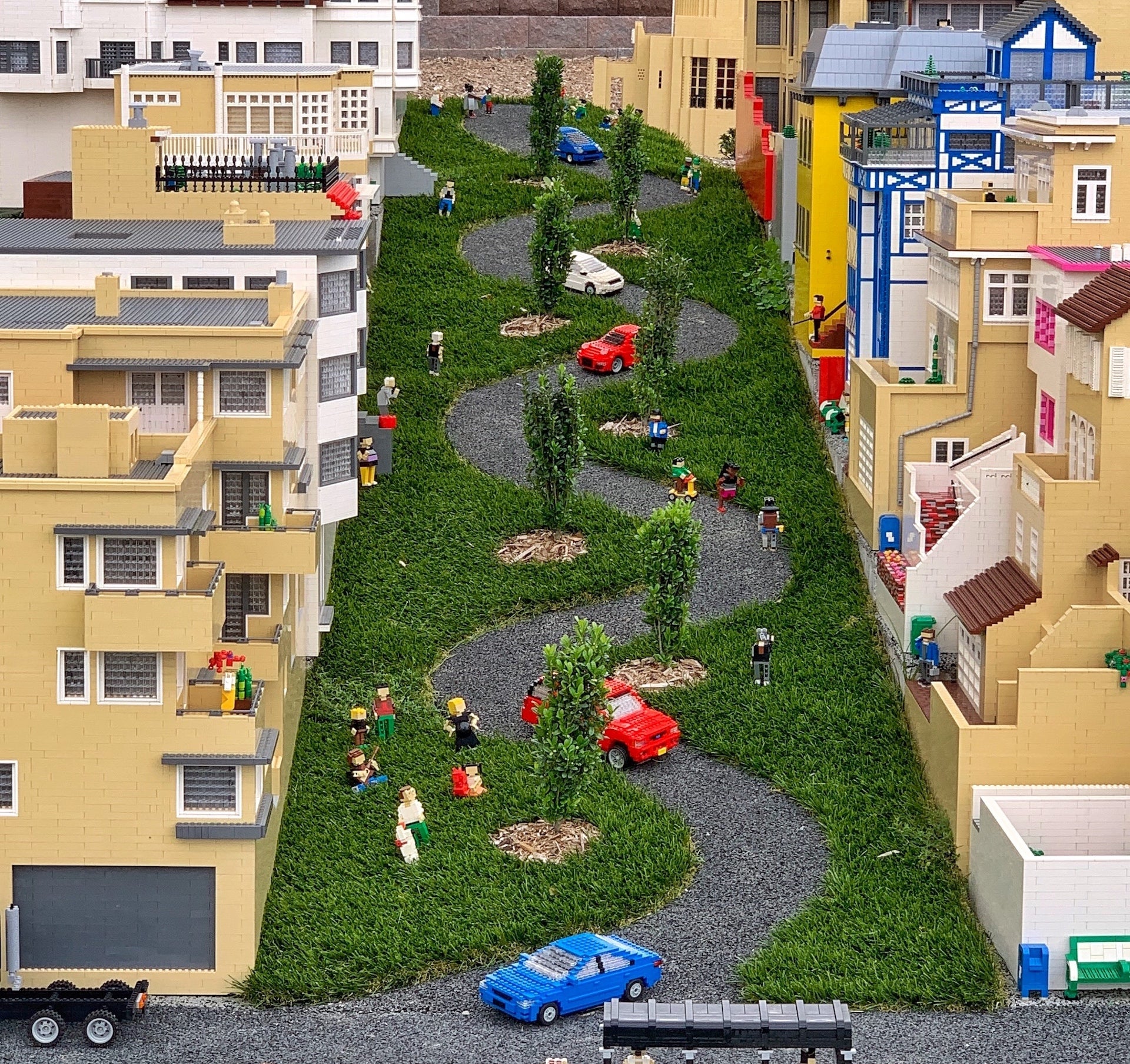 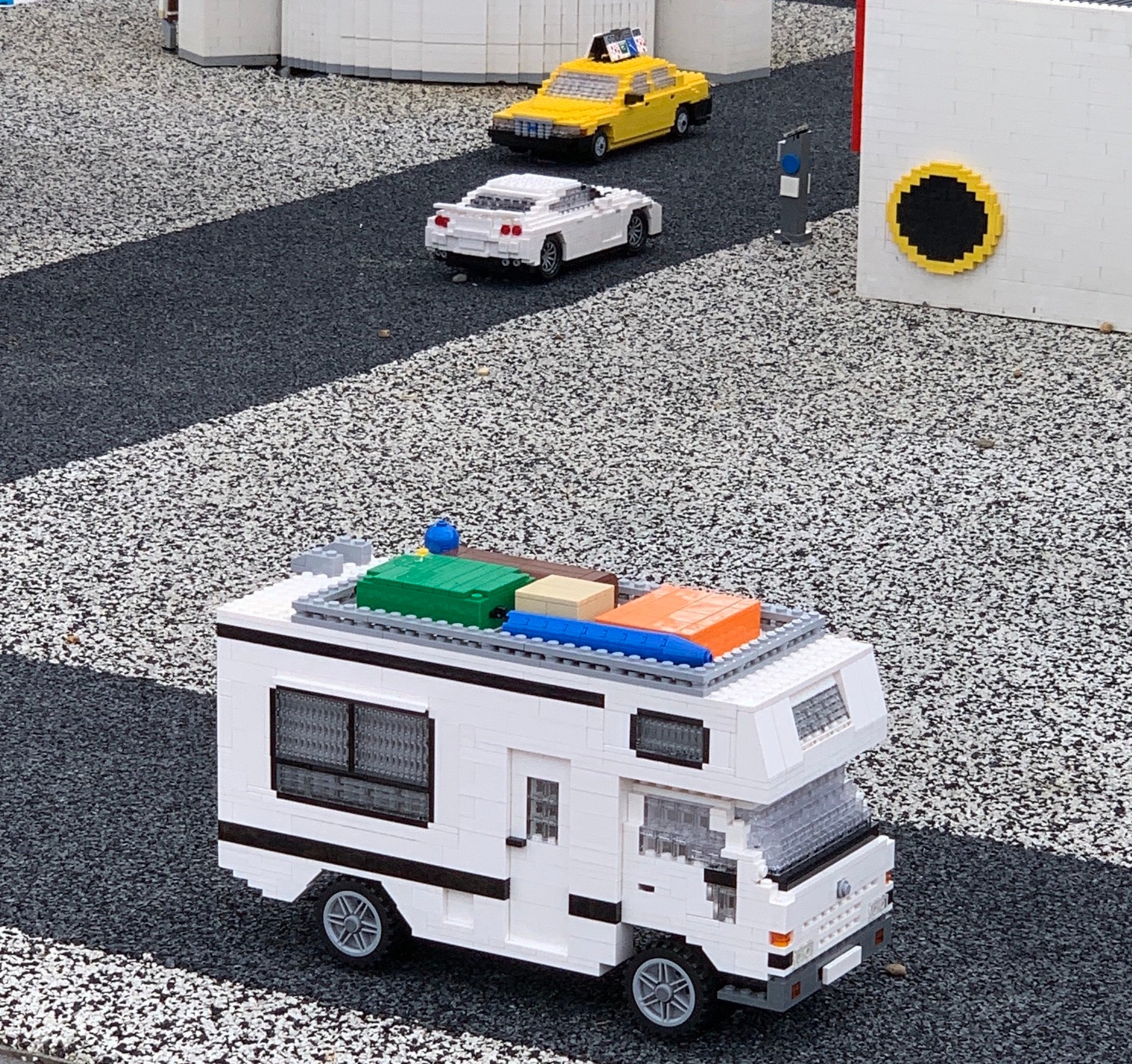 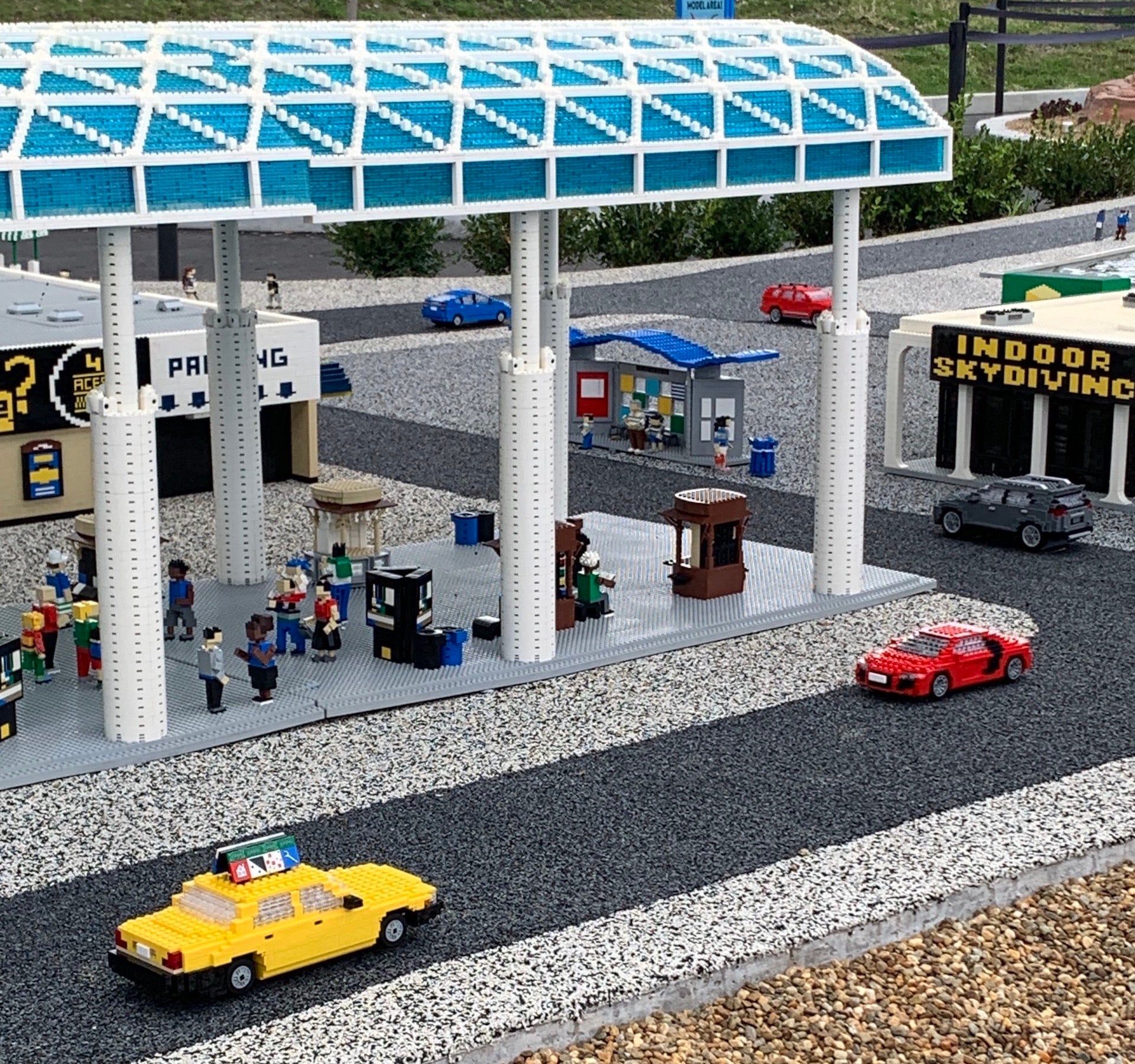 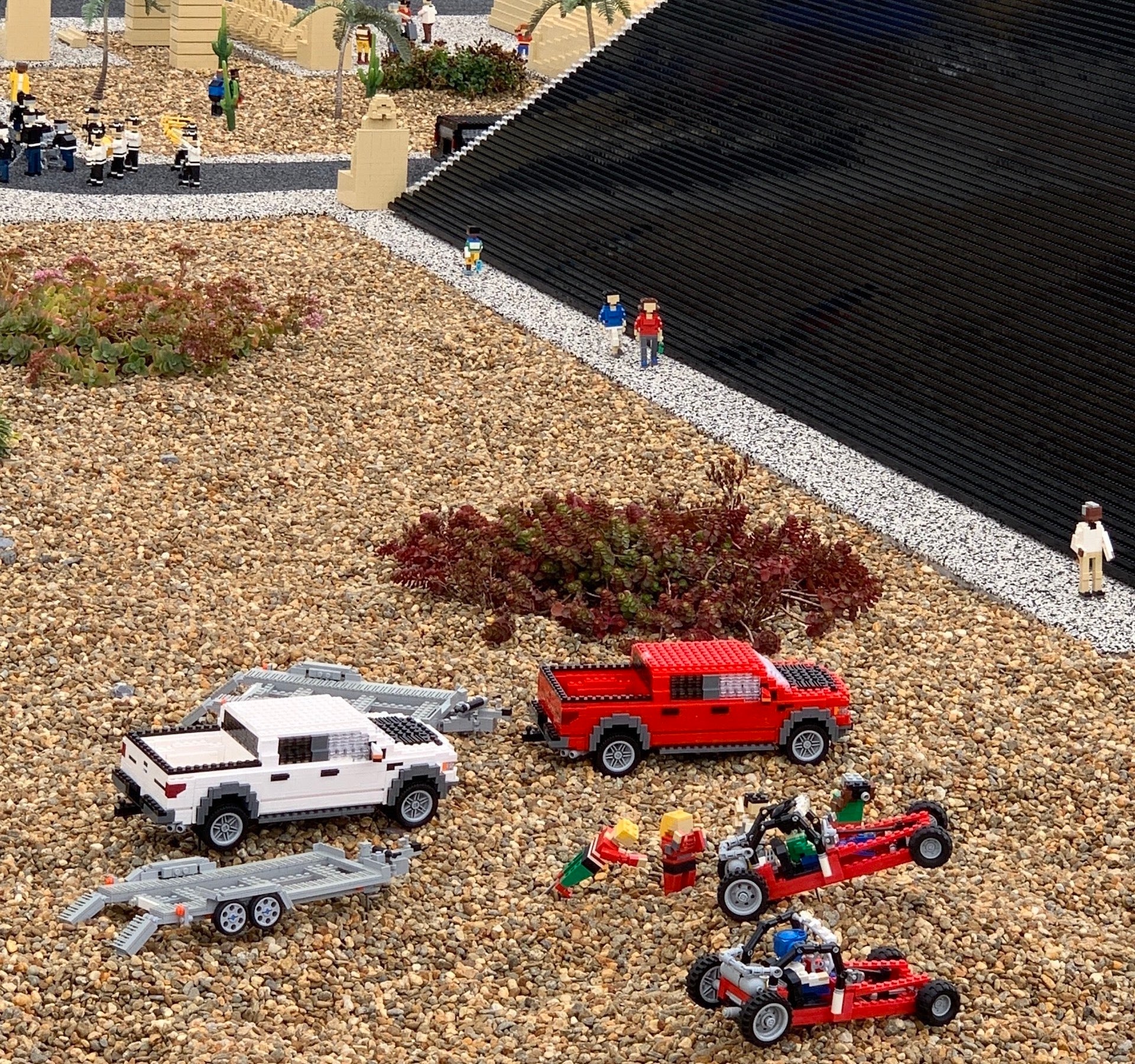 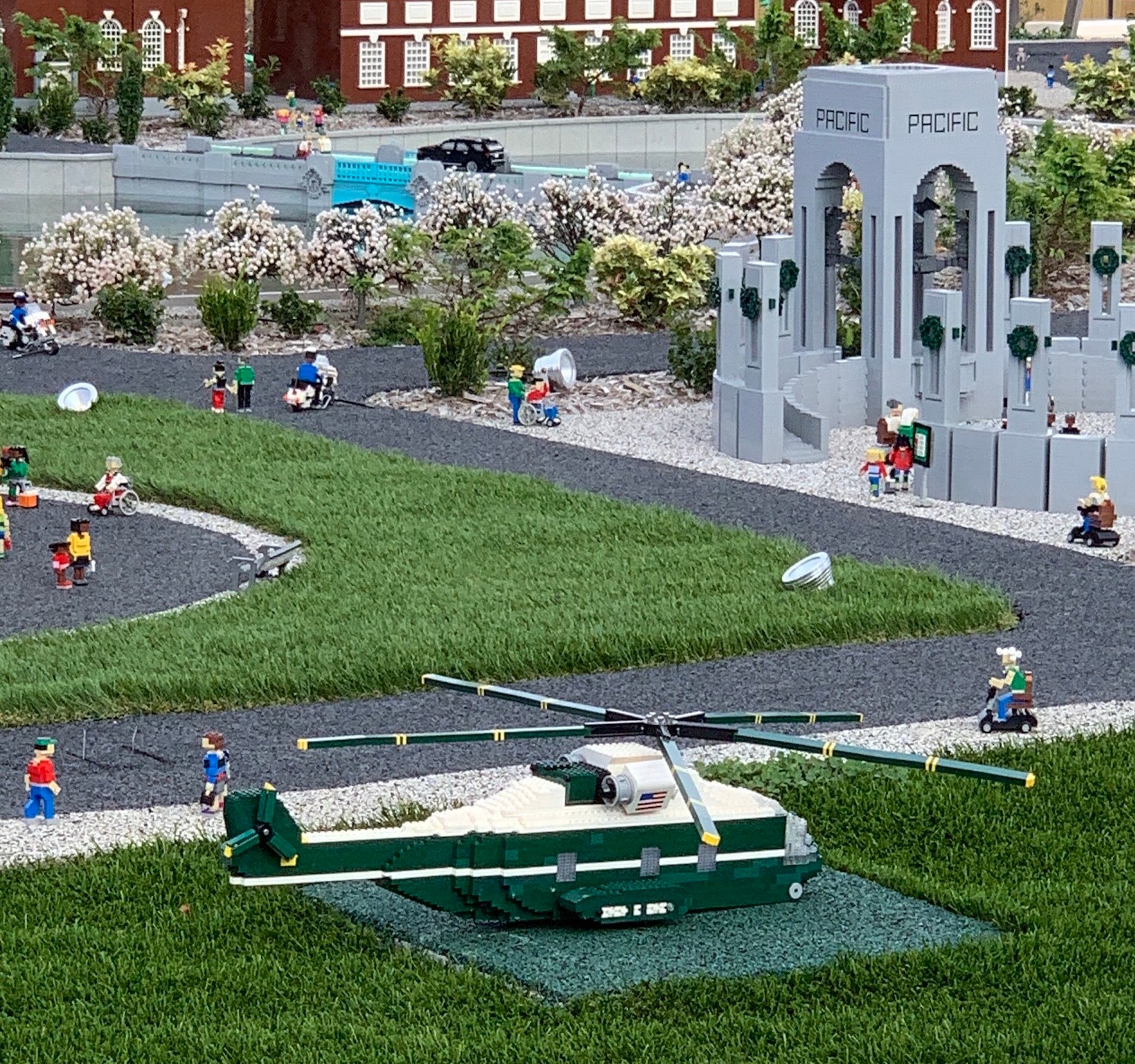 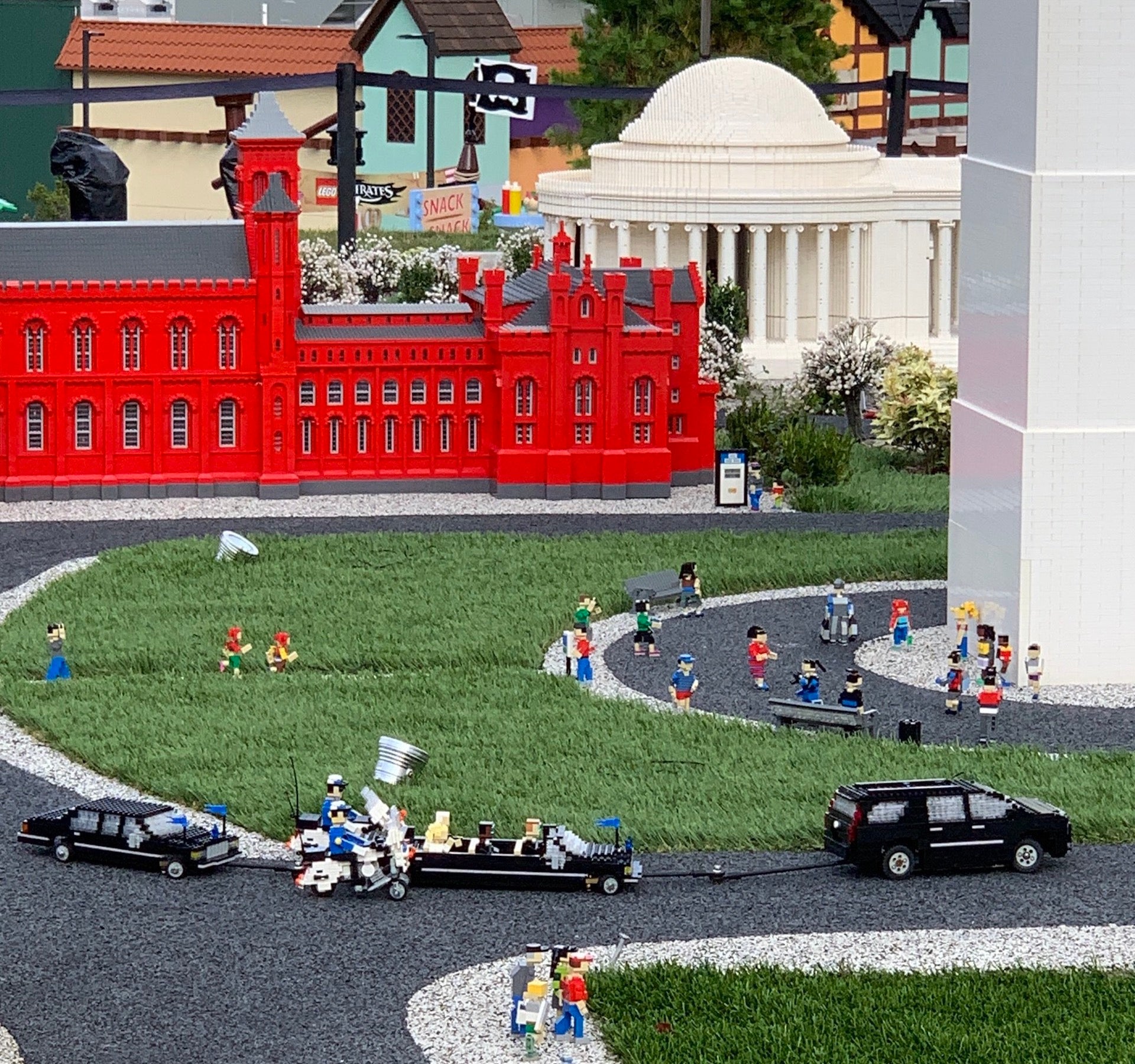 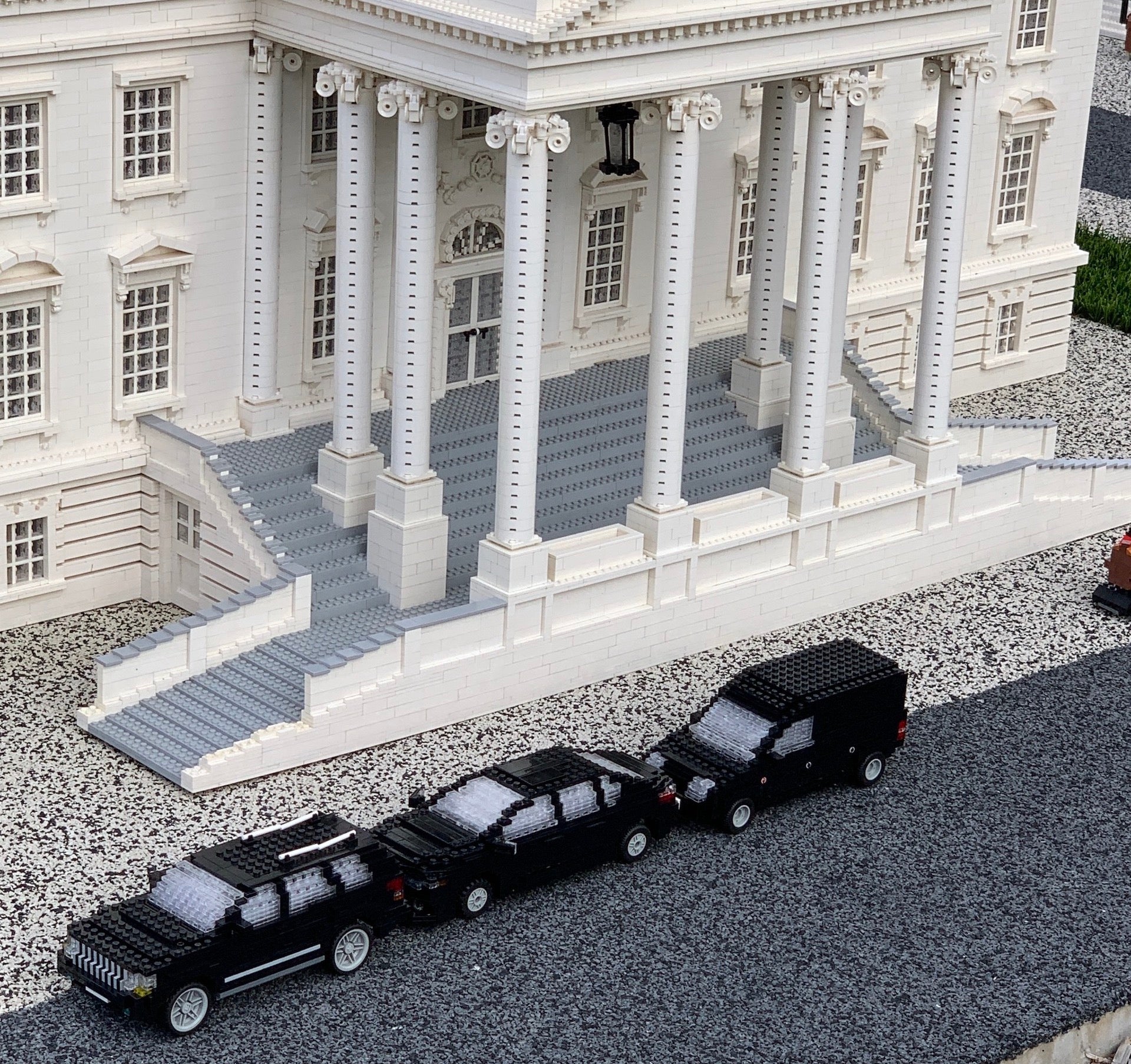 Being the travel junkie that Josephine is, the part of Legoland that features some of the world's major cities built from Lego bricks really drove her over the edge, and I wasn't far behind. There were several cool cars to be seen throughout the humongous sets—Mustangs, Lamborghinis, Raptors, and Escalades, all unmarked. Lego hired builders who clearly knew their stuff while avoiding being too branded.

The remainder of our trip took us through New England, where we enjoyed some of the best fall foliage I've seen anywhere in the world, as well as some of the best seafood. I mean, you can't really go there and not eat the lobstah and the chowdah, can you?

The picturesque coastal boulevards and curvy country roads were like therapy to our souls, and not to mention the actual massage therapy happening thanks to the Bentley's seats. As much as I had scooted the Bentley during earlier parts of the trip, these roads were now made for cruising. Y'know, roll the windows down, let the sunshine in through the sunroofs (it has two), and crack up some Bill Withers on the $7,140 Bang & Olufsen (optional) sound system.

Pulling over to absorb the beautiful vistas along the Maine and New Hampshire border offered us priceless moments of tranquility and reflection. Whether you're an adult or a young kid, it's those moments where your shoulders drop, jaw muscles relax, and you soak it all in.

At the height of the pandemic, when we didn't go places in order to avoid having contact with others, it was short car trips that kept our family sane. My testing routine for press cars—which normally included school and grocery runs—became more about taking a day trip to get a break from the same four walls.

When Josephine got sick, it was those panic-filled drives to the hospital that reaffirmed the important role cars play in society—as stupidly obvious as that sounds. Not just personal cars, but also ambulances, obviously. There's no better example of this than Jeremy Clarkson's story on the Porsche 928, a car that he pushed to its limits after receiving a phone call from his mother, telling him that his father was dying and he had to get there soon.

It's cars that allow us to explore the world, bond with our families, expand our horizons, and ultimately help make our dreams come true. They don't always have to be $282,000 Bentleys, of course, though they certainly make an amazing journey even more memorable.

In this case, it was an aspirational British sedan that took us on a once-in-a-lifetime road trip and helped a young girl learn that little by little, things will get better. Life will go back to normal and it's okay to dream big because sometimes dreams do come true.