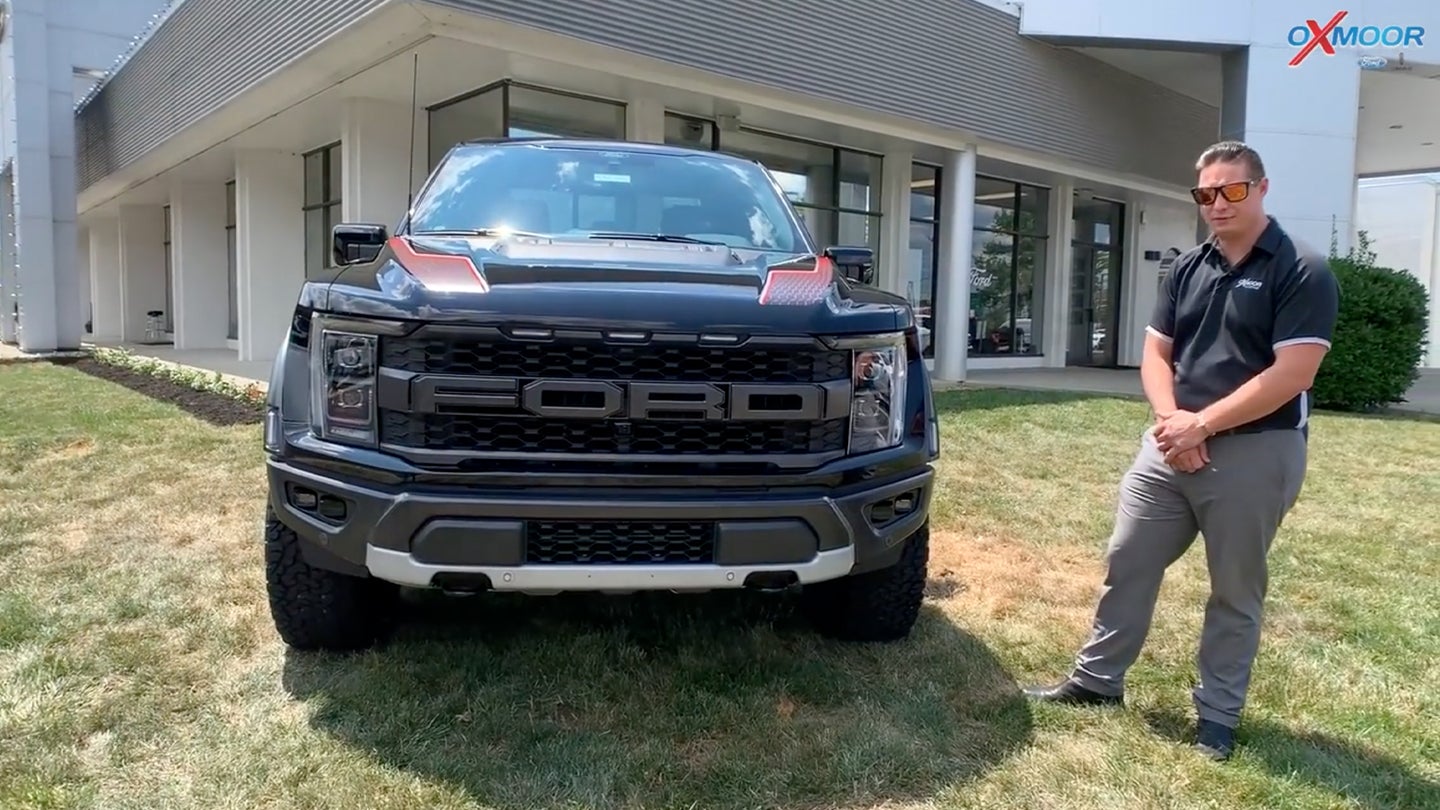 Ford has plenty of trucks to deliver right now and unexpected obstacles are keeping that from happening. Of course, there's the chip shortage, and then the train derailment that totaled tons of F-150s and Transit vans. Supplier issues have also kneecapped Bronco production in more ways than one, so it's surprising to see that Ford's already shipping third-gen Raptors to dealers.

Thanks to @theraptorconnection on Instagram, we spotted a 2021 Raptor for sale at Oxmoor Ford outside Louisville, Kentucky. It's legit, too, as we reached out to Ford about the truck that's currently listed at $10,000 over MSRP. That's a common practice right now anyways, but considering we've only found two for sale across the country, Oxmoor can pretty much charge what it wants here.

While there aren't any photos attached to the dealer's online listing, a walkaround video shows just how loaded it is. It's an 801A package with 18-speaker Bang & Olufsen audio, the Towing Technology pack, carbon fiber accents and adaptive cruise control. It's never mentioned in the quick tour but this Raptor looks to ride on 35-inch tires rather than the optional 37-inch BF Goodrich rollers.

Oxmoor's 2021 Raptor has an MSRP of $80,040, though it's listed with a cash price of $90,040. While nobody likes a dealer markup, it's not the most egregious we've seen, and desperate buyers have made it clear how far they'll go to be the first with a hot new Ford. The other 2021 Raptor we spotted for sale at Shults Ford in Pennsylvania has a higher MSRP of $84,570, though no market adjustment is mentioned, nor are there any photos of the truck itself.

Some have treated the third-gen Raptor's first model year as sort of a buffer between the outgoing pickup and the upcoming Raptor R, which is slated to get a supercharged V8. Regardless of that, the 2021 truck gets coil spring rear suspension, fancy Fox Live Valve shocks and an improved exhaust for that 3.5-liter EcoBoost V6. It's still plenty capable with 450 horsepower and 510 pound-feet of torque, though if you want one with 700 or so ponies, you've got another year to wait.

Got a tip about third-gen Raptors for sale near you? Contact the author directly: caleb@thedrive.com

Adding to the automaker’s production woes, the trucks are reportedly totaled.