Ford's off-roading F-150s have their fair share of differences, but they're similar in more ways than you might expect. 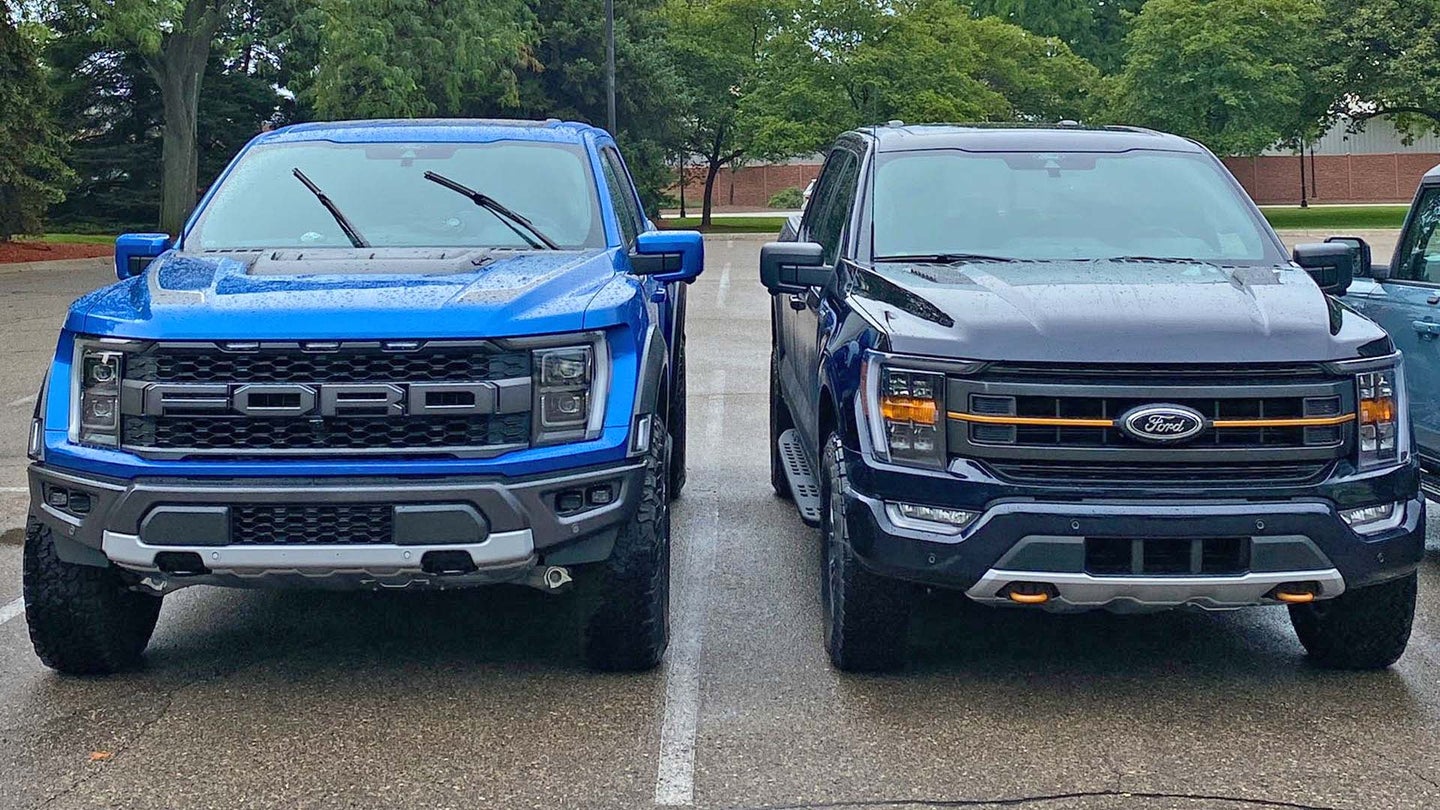 The F-150 Raptor is an off-road trendsetter, as evidenced by newfound competition like the Ram TRX. It has massive 37-inch tires available from the factory and advanced Fox shocks, but it's not the only version of the F-150 designed to take on rough terrain. The truck's Tremor variant was revealed late last year, and it's a capable 4x4 in its own right.

Today we're seeing the two next to each other for what might be the first time, courtesy of Ford North America Product Communications Director Mike Levine. While some differences are clear—like the Raptor's bulging bodywork and meatier tires—there are similarities here that make the Tremor a solid value. It's worth a little analysis.

Now, the Raptor is Ford's off-road king until the V8-powered Raptor R comes out. The Tremor sits below it as a more conventional trim of the F-150, albeit with its own host of upgrades. It's more dedicated to four-wheeling than an FX4-equipped truck, what with its locking differentials, trail-focused tech, and 33-inch General Grabber tires.

Despite slotting below the Raptor, we can finally see just how hardcore the Tremor really is.

The Tremor gets a few suspension upgrades over the regular truck to establish its lifted ride height, including retuned springs and new shocks—monotubes up front and twin-tube units at the rear. The front knuckles and upper control arms are changed to make the lift possible as well. The top of the Tremor's cab is 79.3 inches from the ground as a result, compared to 77.2 inches for a regular F-150 4x4 and 80.7 for a Raptor with 37s. Your eyes aren't tricking you, then, as the Tremor really is just 1.4 inches shorter than the baddest F-150 out there. Fit the standard 35s on the Raptor and the difference shrinks to a half-inch.

Ground clearance, however, is considerably better on the Raptor. At 13.1 inches, the Baja-inspired truck's floor is 3.5 inches higher than the Tremor's. Just the same, the Raptor's panels are also altered to enable a wider track width; it's 4.8 inches wider in the rear and 5.8 inches in the front when compared to the Tremor. Accentuated by plastic cladding, that's probably the most noticeable difference besides the Raptor's altered grilles and light fixtures.

The Raptor and Tremor share a basic drivetrain as Ford's 3.5-liter EcoBoost V6 comes standard on both vehicles. While the Raptor gets a 50-horsepower boost, the Tremor has to make do with 400 ponies. The two share some other components, too, including a front locking Torsen differential.

So the two trucks are similar, but certainly not the same. The Raptor is built for some proper action out in the dunes, while the Tremor is more of a low-speed off-roader. It's also more capable when it comes to towing, with the Raptor limited to around 8,200 pounds versus the Tremor's maximum of 10,900. Price is also a factor; the Raptor is costly at $65,840 while the Tremor slips in at $51,200 including destination. One is more capable for everyday use, but at the same time, it's hard to beat the Raptor's 4x4 capabilities and aesthetics. If the extra off-road grunt and the looks are worth another $14,640 to you, then the decision is gonna be pretty easy.