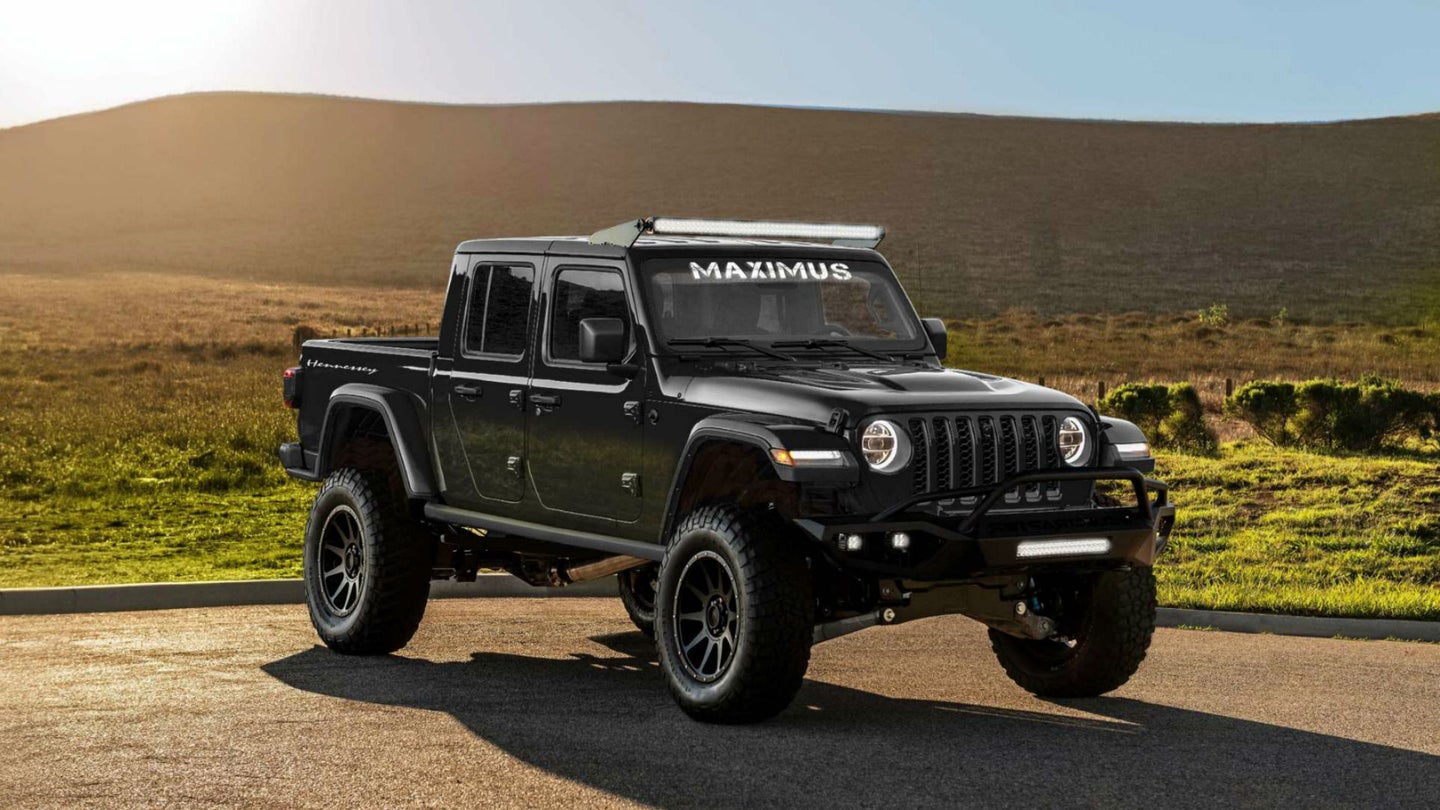 Texas-based tuning legend Hennessey Performance has become rather well-acquainted with the 6.2-liter Hellcat V8 and, naturally, it now plans to swap the high-powered engine into the hottest pickup truck on sale: the 2020 Jeep Gladiator. However, instead of leaving the supercharged power plant in its stock, 707-horsepower state, it plans to up the ante by creating an off-road brute that produces 1,000 hp. This "bigger-is-better" ethos is carried throughout the limited-run model, named the Hennessey Maximus 1000, from its tires and suspension to the price tag, which clocks in at a healthy $200k.

The mega truck was announced on Wednesday as Hennessey revealed just 24 of them will be built in the coming year. They'll all be equipped with the upgraded Hellcat V8, which also makes 933 pound-feet of torque, as well as an eight-speed automatic transmission. Power is sent to all four wheels which are wrapped in a set of BFGoodrich KD off-road tires. This added grunt is made possible courtesy of custom ECU tuning as well as improved cooling and fueling systems, plus an in-house-built stainless steel exhaust.

Company founder and CEO John Hennessey described the need for such a vehicle as clients searched for "badassery on four wheels."

“We wanted to create the ultimate Jeep Gladiator,” Hennessey continued. To the droves of power-crazed 4x4 enthusiasts, it seems like they were able to do just that.

A 6-inch suspension lift, Maximus front and rear bumpers, and LED lighting provide the necessary rugged kit and visibility to get the job done while off the beaten path. These modifications complement the already-capable Gladiator platform which The Drive's Kyle Cheromcha described as "the master of the midsize truck arena."

Orders are now open for the Maximus 1000 and, while Hennessey might not have been the first to create a Hellcat-driven Gladiator, rest assured it'll be even rowdier than those with just 707 hp. The $200k price includes the cost of the pickup and even comes with a three-year/36,000-mile warranty for your supertruck.

Meanwhile, we'll be plotting our get-rich-quick schemes to make sure one of these ends up in our stable ASAP.