If you can’t beat 'em, join 'em—or so Audi Sport decrees with the introduction of the first RS-badged SUV, the 2020 Audi RS Q8. It's here to defy the purists and answer the public’s clarion call for high-riding horsepower. Demand continues to outstrip supply, even with the Lamborghini Urus, Bentley Bentayga, Jaguar F-Pace SVR, Range Rover SVR, Porsche Cayenne, and Jeep Grand Cherokee Trackhawk already on the road, not to mention the M- and AMG-badged segment stalwarts and upcoming entries like the Aston Martin DBX.

The RS Q8's task is no different. And to those who might lob a hot take at its mere existence, know that once you slide into the RS Q8’s seats, dial up the craziest driving mode, and rail this 5,291-pounds, 591-horsepower daemon on a proper serpentine mountain pass, you'll understand how any complaints about another fast SUV are both outdated and unwarranted.

This isn’t just a super SUV holding its own against its hefty weight class. Rather, Audi’s engineers have delivered a Q8 worthy of its RS badge. It may not resemble sporty Audis of the past, but the 2020 RS Q8 silences naysayers with a dignified, twin-turbo blat.

Design Histrionics Are Left to Lamborghini

Standing twenty feet away, you’d be hard pressed to list exterior differences separating the standard Q8 and the wilding RS. Perceptible changes are at first limited to its larger wheels—either 22- or 23-inch are available—tweaked trim materials, and the RS Q8's modestly lowered stance.

Move in closer, though, and the RS Q8’s angle is clearer. The grille features the same hexagonal honeycomb motif as the rest of Audi’s RS lineup and gracefully blends into slightly more pronounced fender flares to better encompass the car’s massive wheels. While a 23-inch roller calls to mind the NOPI age of car customization, the sizing works with the Q8's quietly menacing design and gets filled out with optional 17.3- and 14.6-inch (front/rear) carbon-ceramic rotors with 10-piston calipers to brake this brick house. Steel discs are standard, as is air suspension.

Interestingly, the steep end of the RS Q8's seven dynamic driving modes (Comfort, Auto, Allroad, Off-Road, Dynamic, RS1, and RS2, the latter two of which are akin to configurable Sport and Sport Plus modes) drop the body to such a degree that highway slowpokes might think they’d just been buzzed by a chunky wagon. Allroad and off-road raise the body and offer tiered all-terrain driving profiles with changes to the traction, stability, and power delivery settings.

Its all-wheel drive system is as capable as any Audi, and a max ground clearance of 7.8 inches will get you farther than speed-first visual touches like subtle body creases, rear fender vents, and a functional rear spoiler would suggest. Delete the RS badge and it's the definition of a sleeper.

Plopped just behind the front axle for better weight distribution is Volkswagen Group’s now-familiar 4.0-liter twin-turbocharged V8—an engine featured in the new RS6 Avant, Lamborghini Urus, Bentley Continental GT V8 and Flying Spur V8, Porsche Cayenne and Panamera, and VW Touareg. And while its ubiquity might be a turn-off for some, its performance in the Audi RS Q8 obliterates any desire for something more exotic under the hood.

Patiently waiting beneath your right sole is a 591-horsepower battering ram. Audi claims that in full attack, the RS Q8 will clip 62.1 mph in 3.8 seconds and continue onto a sports car-like top speed of 189.52 mph. Germans love their precision. Between engine and wheels is an 8-speed Tiptronic automatic transmission, which is flawless, immediate, and does a near-perfect impression of Audi or Porsche’s dual-clutch units in sharper driving modes.

An optional active Audi Sport rear differential ensures the RS Q8 corners as violently as any other RS model by vectoring power between the rear wheels to rip away from each apex like a rabid cheetah. The Quattro AWD system runs with a 40-60 torque split front to back in normal conditions, with maximums of 70-30 and 15-85 in either direction. Something that’s becoming increasingly standard across Volkswagen’s other brand is all-wheel steering, so that also comes to the RS Q8. At low speeds, the rear wheels can pivot opposite of the fronts by up to 5-degrees, and 1.5-degrees in tandem with the front wheels on the highway for a crab-walk lane change.

European buyers get a 48-volt mild hybrid system, too, but the U.S. market won't see it turned on. Audi's product team apparently believes we wouldn't be cool with the way the system kills the V8 entirely at speed for emissions-free coasting between 35 and 100 mph. We’re not sure if that’s true as the Euro-spec system we tested is seamless.

NASA Wants its Saturn V Back

What all the pitch decks and spec sheets in the world can't adequately relay is how once you drop the hammer in the 2020 Audi RS Q8, there's no breaking the bond between the back of your skull and the headrest. In the space between two heartbeats, momentary turbo lag dissolves into unfettered and unending acceleration. Few 5,300-pound cars move with this kind of sheer lunacy on their way to triple-digit speeds. With a somewhat diluted turbocharged blat—we were promised U.S.-spec cars will have a more aggressive bark—the RS Q8 is suddenly in another time zone, and you're just along for the ride.

Though its nearly 600 horsepower is certifiable, it’s the RS Q8’s twin-turbocharged V8 torque that’s addicting. In pull after pull at different elevations, ambient temperatures, and road surfaces across the island of Tenerife, the RS Q8 coiled up and released its energy without fault. And while most customers would be completely satisfied with green-light heroes, Audi Sport’s RS requirements aren’t so one-dimensional. A true RS needs to clip each apex with furious aplomb as if Walter Röhrl were in the driver’s seat himself.

Tearing through Tenerife's ever-changing landscape, it’s clear Audi Sport’s engineers did their level best to hide the RS Q8’s weight. No amount of technical wizardry can defy the physical laws governing our pale blue dot, but its adaptive electromechanical sway bars deliver sports car-flat cornering in the RS Q8’s most dynamic settings. The result is an SUV, that when hustled, dances on its toes and feels far more nimble than one would expect a 5,291-pound SUV to behave.

As such, there’s no need to ham fist the perforated leather steering wheel—a part shared with the new 2020 RS6 Avant, by the way. Pre-conceived notions about proper cornering speeds in an SUV can be tossed aside. Go faster, the RS Q8 can handle it. Be it a fast sweeper or the sharpest of corners, each is summarily dispatched with Teutonic precision. There’s also a subtle hint of rage that beggars belief.

Between the RS-specific damper settings, all-wheel steering, active torque vectoring, optional performance tires, and those magic anti-roll bars, the RS Q8 lives to be rung out. Audi clocked a 7:42 at the Nurburgring Nordschleife. Yet what's truly impressive is when the red mist departs, this is a luxury SUV with a seriously supple ride.

Tiger on the Streets, First Class in the Seats

Popped the RS Q8 quieter Comfort mode and the cabin’s isolation from the outside world is comparable to any modern Rolls-Royce. Sound-deadening materials surround you, including thick-pane acoustic glass, and active exhaust baffles that nearly silence the turbocharged V8. Comfort also uncouples the electronic sway bars and softens the adaptive suspension settings to glide over road imperfections. Seriously—blindfold someone and they'd be hard-pressed to believe they weren’t in a Roller. They might have other questions, though.

Few if any luxuries are spared in the 2020 Audi RS Q8. Driver and passenger are treated to heated, cooled, and massage-ready leather seats—Alcantara and Valcona leathers are available—that are sublimely comfortable even with their aggressive bolstering. Another plus to performance SUVs over sports cars is that the front seat is never cramped, and the RS Q8 had head, shoulder, and legroom to spare even for my 6'4" frame. Rear occupants will find similar if less-ostentatious accommodations, with slightly less headroom thanks to the sloping roofline (we're not calling it a coupe) and heated-only seats. Two stereo systems are available; the base-spec is just all right, and the optional Bang & Olufsen setup captivated our ears with its crystal-clear fidelity across music genres. Audi didn’t say exactly how much it’d be at launch but hinted that it should be about two thousand dollars more. Get it.

Drivers have access to the brilliant Audi Virtual Cockpit, which still stands out among increasingly-common digital gauge clusters for its functional, customizable design and tricks like a fullscreen map display. A Head-Up Display is optional and sends the driver speed, audio, and turn-by-turn navigation; it too is configurable. Apple CarPlay and Android Auto are standard and work harmoniously with the RS Q8’s native infotainment, which is carried over from the standard Q8. Also carried over are the Q8’s suite of active and passive safety systems.

Physics would have you believe a high-riding, gargantuan of an automobile should not be as good as the 2020 Audi RS Q8. Reality proved otherwise. We’re not saying that the RS Q8 should replace anyone's supercar, but it makes a well-prepared case for buyers seeking practicality, space for five, luxury, and the ability to utterly humiliate most of the sports cars currently produced.

There’s just one unknown, and it's a big one: price. Audi is still finalizing the U.S.-spec 2020 RS Q8’s pricing, however, it's expected to start around $125,000, above competitors like the $105,000 BMW X5M, well below the $178,500 Land Rover Range Rover SV Autobiography Dynamic, and right on the doorstep of the 2020 Porsche Cayenne Turbo. Be judicious with the pricey options tree and the 2020 RS Q8 will still represent a performance bargain compared to the $200,000-class of the Lamborghini Urus, Aston Martin DBX, Bentley Bentayga, and Mercedes-AMG G63.

Hot takers can opine about performance SUVs until they're red in the face—the 2020 Audi RS Q8 is here, and it's not going anywhere soon. Nor should it. Its development shows that even if the future will be dominated by crossovers, enthusiasts will still have a seat at the table. It just might be a little higher off the ground than we expected. 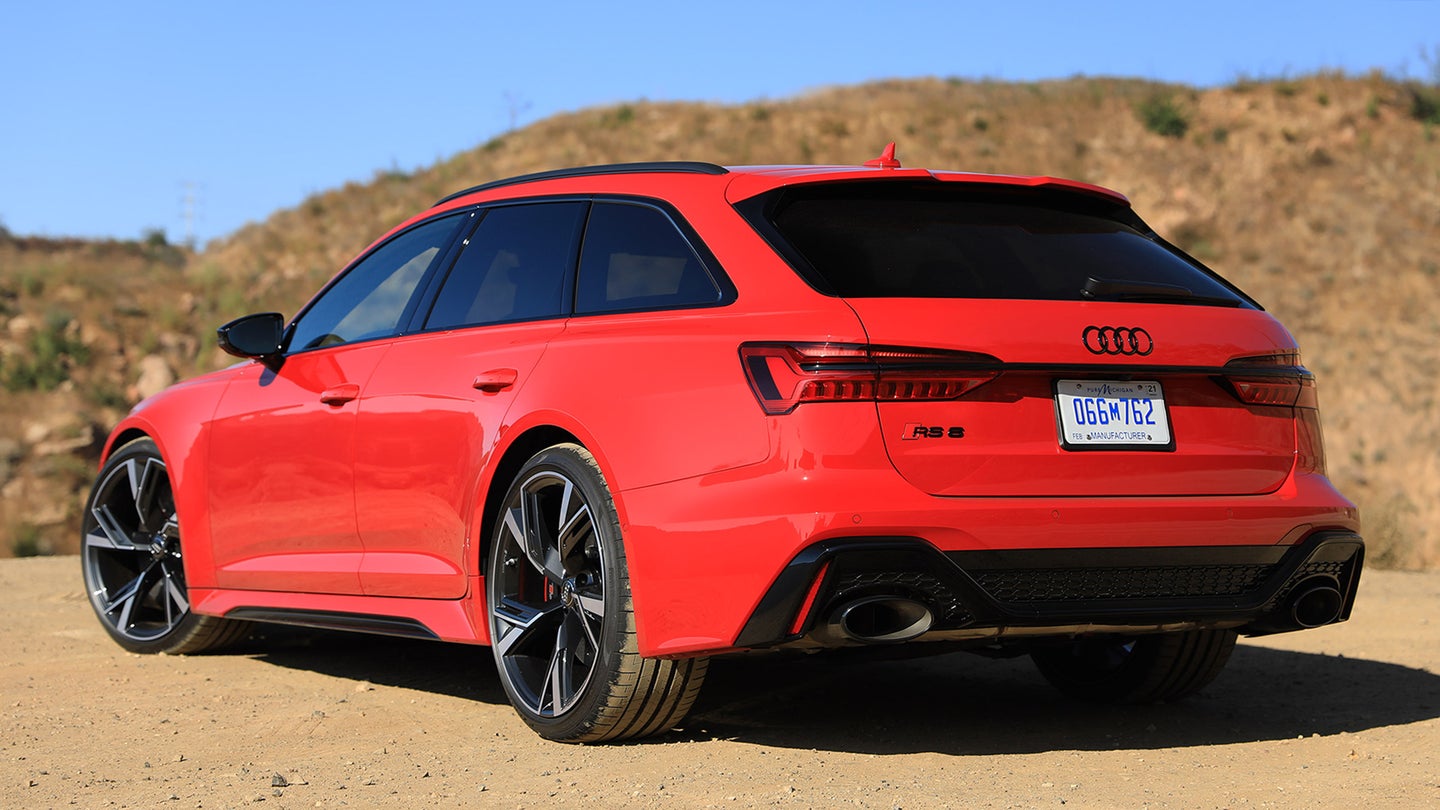 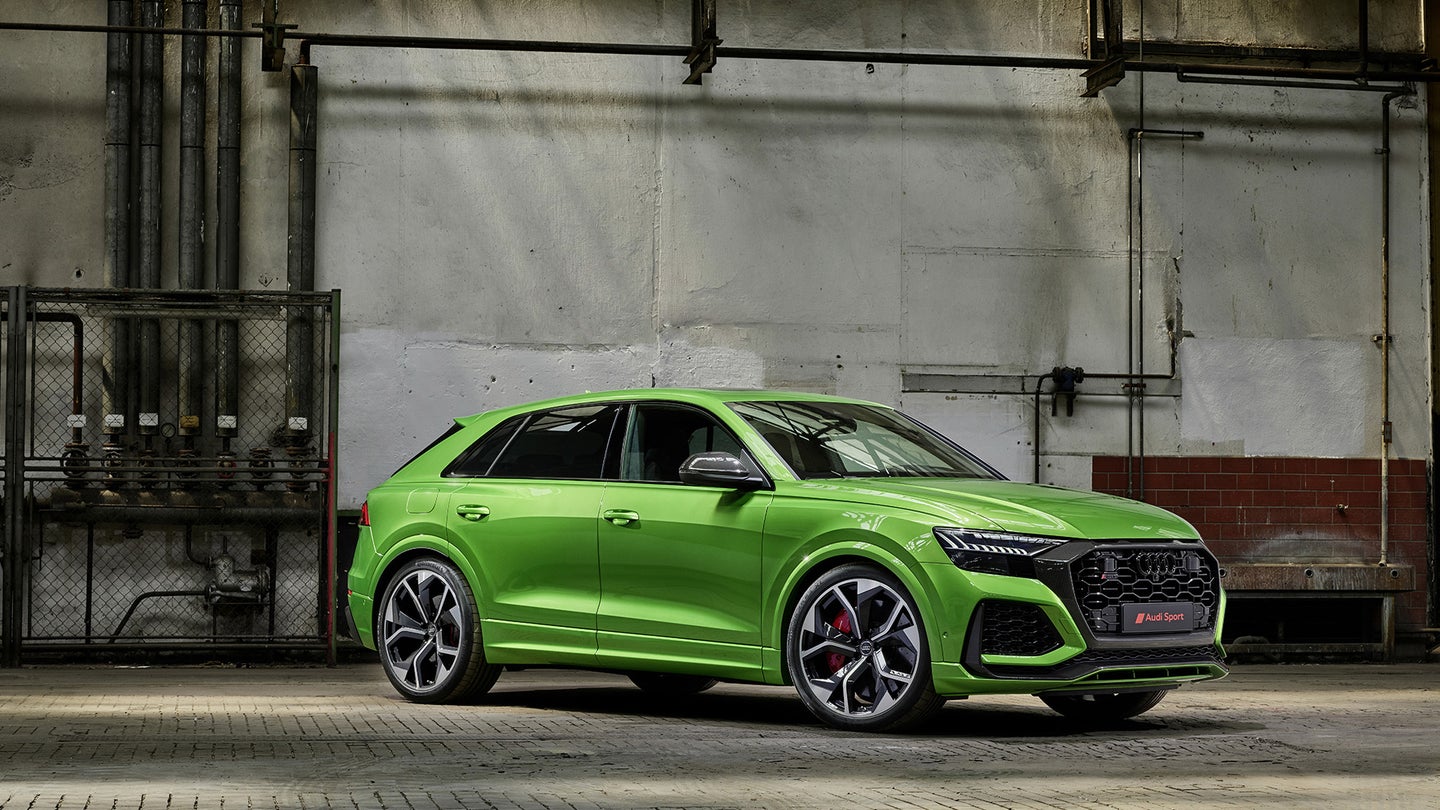 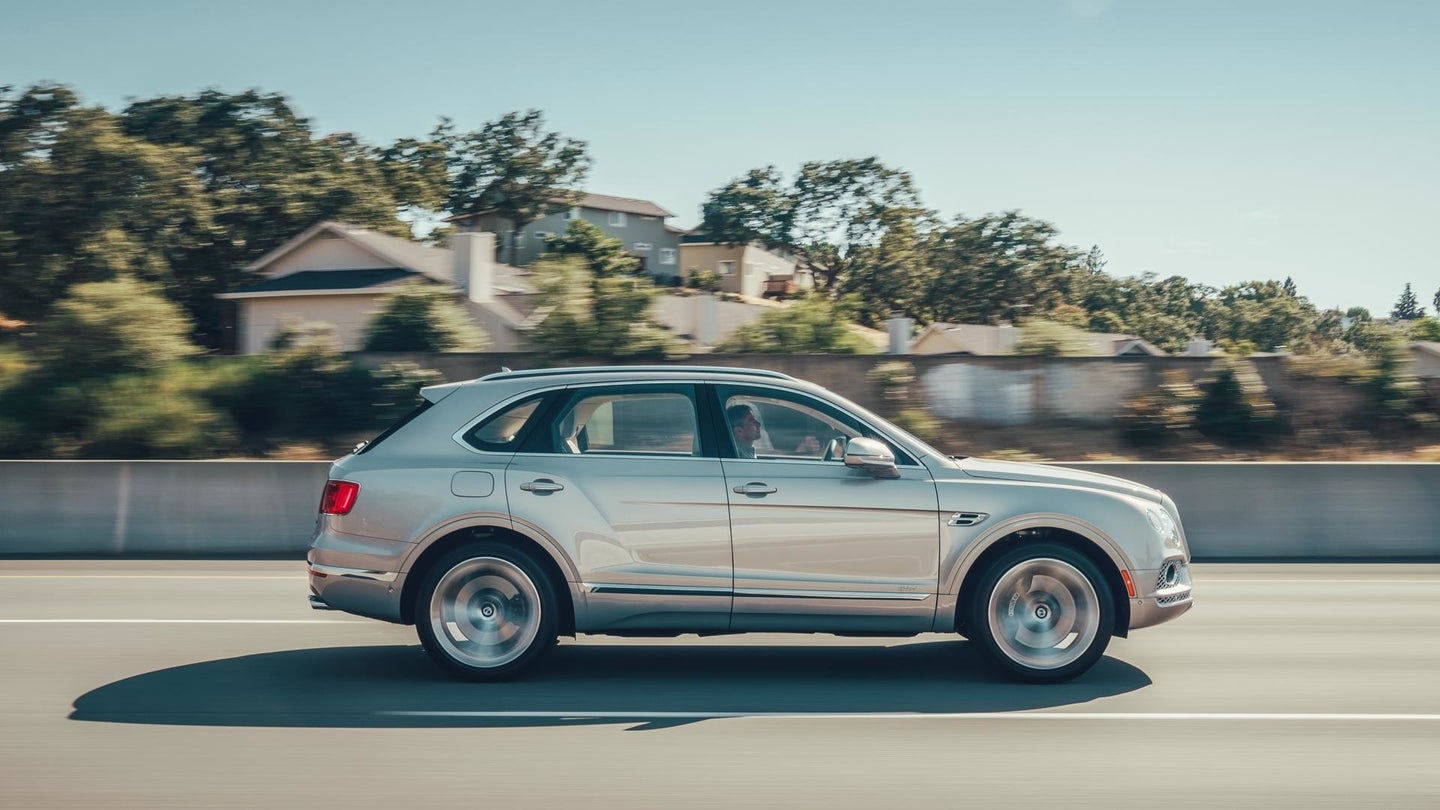