2019 Audi Q8 Review: A Two-Row SUV with the Heart of a Sporty Sedan 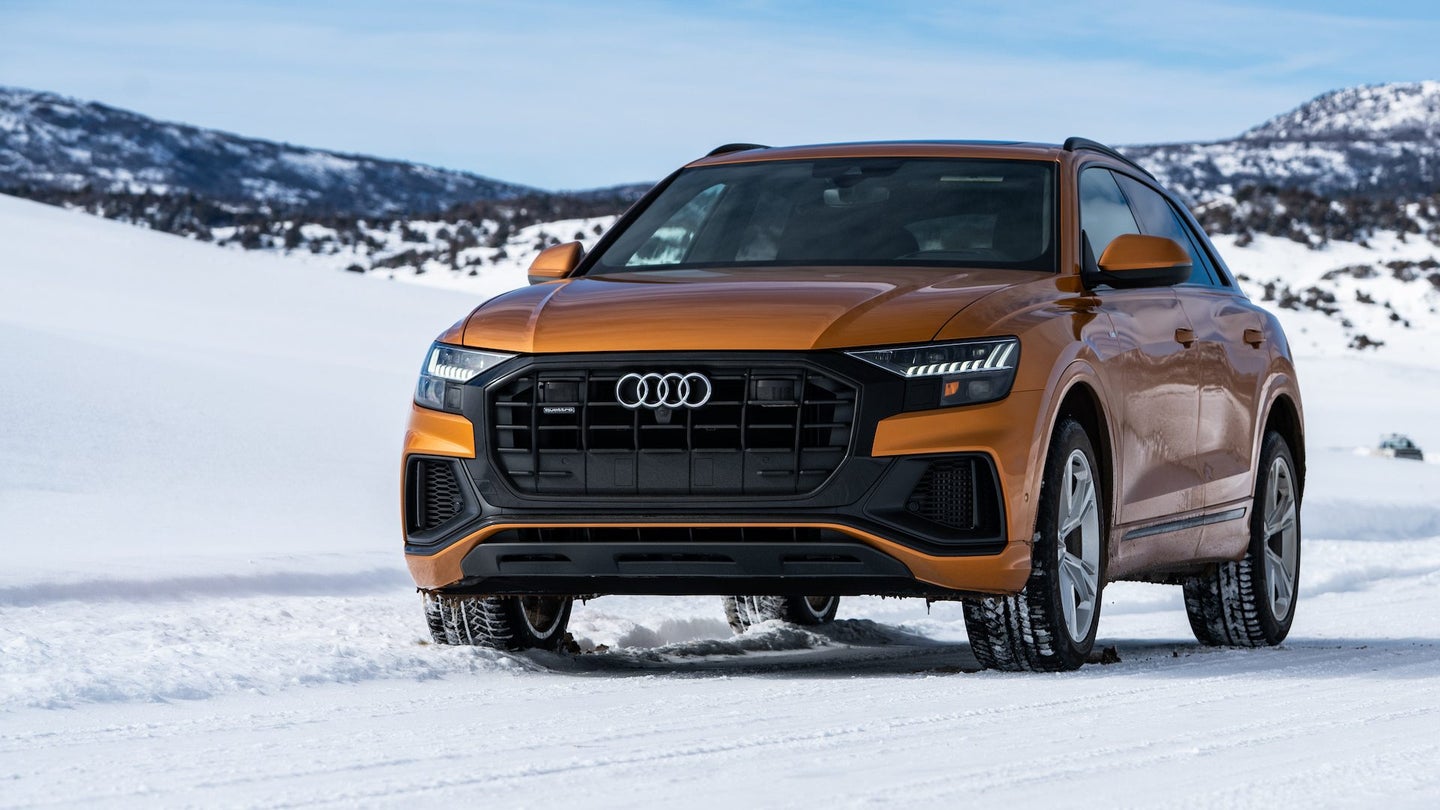 I'm driving the 2019 Audi Q8 at 5 a.m. in Park City, Utah. It’s snowing heavily on Main Street, there’s not a soul in sight, and I’m at the controls of the wide, surprisingly wicked luxury SUV equipped with winter tires, a 335-horsepower V6, and an all-wheel-drive system that’s biased just aft enough to be fun when fun is required. I rocket up Main Street, leaving a plume of fresh powder behind me, and race for Empire Pass, about as near as I can get to a mountain summit without lift tickets or a Sno-Cat. The big Audi squiggles pleasantly when I tip in the throttle just deep enough to break traction and gets loose in every turn, yet stays composed when the conditions worsen at higher elevation, and I decide to actually drive like a grown-up.

Such are the choices one can make behind the wheel of the new 2019 Audi Q8, the company’s new line-topping five-seat SUV: Play it safe and sensible, or plow the pass like an eager ski bum sent on an errand in the boss’s car. The car’s mechanical Quattro all-wheel-drive system, with its standard 40:60 front/rear torque ratio, ensures some fun while the electronic torque modulation keeps things in line, improving traction by varying that ratio as necessary. It’ll send up to 70 percent to the front or 85 percent in the rear, depending on the conditions.

The Q8 proved as capable as you’d expect from any Quattro-enabled Audi. During a drive from Park City to Telluride, conditions included loose powder, hard-packed snow, and straight-up ice. We saw bone-dry pavement turn in a flash to slippery slush on a twisty mountain road with no guardrails and a 700-foot vertical drop. The Q8 kept its cool, though, and in the dry proved itself to be just as much fun as in the slicker stuff—its optional adaptive air suspension kept the car flat in the turns during more aggressive hill climbs, and it also allowed for more range while trundling through trails, allowing up to 3.5 inches of adjustment, to a maximum clearance of 10 inches.

The Q8 is a new addition to Audi’s lineup, meant to offer a sportier alternative to the large Q7 SUV, which is more the family hauler. The car’s look is distinctive from its sibling, and a much more enticing option compared to the awkward “coupe” styling of the BMW X6 and the Mercedes GLE, its key competition. Indeed, while both of those cars have compressed rear seats barely suitable for adult habitation, the Q8’s back bench can hold three adults, all over six feet, quite comfortably. Much of this can be traced to the gently sloping rear roofline that not only doesn’t cramp interior space as much as the plummeting profile of the BMW and the Mercedes, but it also looks better. The rest can be attributed to the lack of a third row, which allows for more flexibility in spacing out the second.

Other touches around the exterior are equally alluring. There are the narrow A- and B-pillars that improve visibility and, along with the frameless doors, are meant to pay homage to the famous ur Quattro of the 1980s. There’s also the chiseled rear end with the connected taillights. Up front, the fascia is a pretty busy place, with dynamic LED daytime running lights, a pair of prominent sensor pods—including LIDAR for improved cruise control functionality—and an optional blackening of the whole shebang if you opt for the Year One package. The conventional chrome-trimmed grill, however, pops more organically, while the blackout version doesn’t scream “menacing” as much as it just looks like something fell off.

Generally, however, the look is crisp and confident, and it drew many eyeballs on the road, including multiple queries from Q7 drivers who were clearly looking to upgrade now that their kids had upgraded themselves to young adults. It’s a logical progression, and the Q8 promises a much more satisfying and dynamic experience for those who want practicality but not all the world is able to provide. The interior space is still robust enough for weekend getaways or Home Depot runs, and the overall powertrain is a significant improvement over most any other vehicle in its class. The new 3-liter V6 provides that 335 hp along with 369 lb-ft of torque, generating a 0-60 time of 5.6 seconds, and it’s one of the few vehicles to reach 48-volt status, the new power supply systems that enable every greater gamuts of driver-assistance capabilities as well as mild-hybrid capability via a 10aH battery buried under the rear cargo floor.

Once we left the snowy climes of Utah into the only slightly less snowy climes of Colorado, the systems aligned to produce what’s overall a smooth and pleasant ride. Though the seats aren’t quite as embracing as they could be, they’re nevertheless fully supportive and comfortable on long hauls, and the Q8’s gamut of digital interfaces—notably Audi’s new dual-screen MMI with haptic touchscreens (a little hammer taps the screen from behind with every touch, evidently)—provides all the entertainment and intel most of us could hope for. The interior aesthetic, meanwhile, provides sleekly horizontal trim elements and general design cues that help exude space, while the beveled wood trim hits the expected luxe touch. It all adds up to a satisfying and comfortable interior experience. It’s neither monotonous nor excessive.

Pulling into Telluride—where the snows returned—after two long days of driving, it proved harder to part ways with the car than I expected. Though normally a sedan/sport enthusiast, I found this SUV combined most of what I want in that realm with the elevation and capacity people increasingly crave from the bigger vehicles. It also just looks fantastic, particularly in its Dragon Orange trim, which matched nicely with the desert terrain we explored between the two states. The Q8 starts at $67,400 for the Premium trim, $71,000 for Premium Plus, and $76,550 for Prestige, the latter two of which add a variety of driver assists, sound system options, lighting packages, and safety sensors.