This super crossover's greatest strength is flying under the radar. 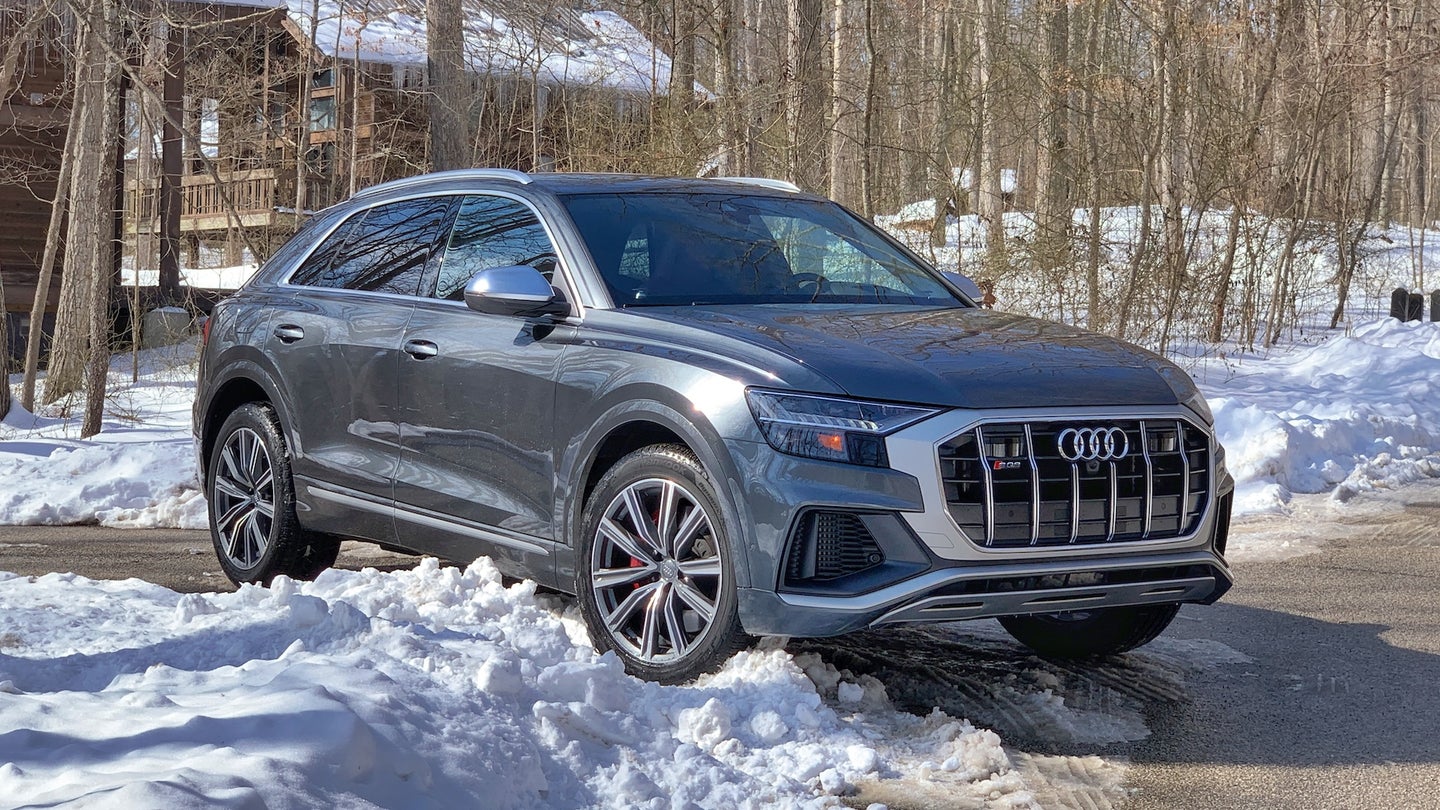 Audi's been on a solid run lately cranking out great cars and SUVs—though mostly SUVs—that cater to customers who may be left unfulfilled by its main rivals. Vehicles like the borderline-perfect Q5, family-friendly Q7, and the markup-worthy RS6 wagon prove that some folks still favor the understated luxury of the Four Rings over the larger-than-life Mercedes badges and visually questionable BMW grilles. The Audi Q8 is a bit different, however, boasting styling that's more flamboyant than its siblings—and in SQ8 trim, a darker attitude too to go with a twin-turbo V8.

I recently spent a snow-filled week in the 2021 Audi SQ8, a stylish, tech-packed, luxury five-seater that rests at the very top of Audi's SUV lineup. (Only the Lamborghini-fied RS Q8 is more powerful and more expensive.) Unlike most automakers whose flagship SUVs are the biggest and feature three rows of seating, the Q8 earns flagship status courtesy of outright performance. In fact, the SQ8 is three inches shorter and sits two fewer people than the SQ7, but who's counting?

Not me, because it doesn't take a long time behind the wheel to see why this is a worthy flagship—even without the vaunted RS badge—and why my Daytona Gray Pearl tester tipped the scales at $107,490.

I admit to suffering a bit of sticker shock when I saw my tester's price, especially considering the SQ8 isn't exactly a behemoth like most $100,000+ SUVs you see on the road nowadays. My father drives a Q5, and quite frankly, the SQ8 doesn't look that much bigger to the naked eye, yet it costs twice as much. Even compared to the other Germans, you have to get into the bigger and beefier AMGs and Ms to break the six-figure mark, and they both have considerably more heft to them... more presence.

This Audi, however, embraces the concept of "less is more," with subtle lines that require a couple of takes to grasp the beauty within them. It's a pretty thing, but not a hot thing, if you know what I mean. The fenders, for example, don't stand out all that much until you notice how they connect to the front and rear fascias, where together they make a bigger statement. The grille looks just like a regular octagon from afar, but upon closer look, the horizontal dark lines crisscross the silver vertical slats to reveal a bold design that cleverly hides hardware for the advanced driver-assistance systems.

It's in the rear, however, where the SQ8 design really pops, with a gorgeous taillight assembly featuring two main units connected by a thin LED strip up top and a piano black cover below adorned with chromed Audi rings. At the bottom, a quad pipe setup lets bystanders know that there's some serious muscle under the hood. In fact, these are the only visual giveaway of the SQ8's performance capabilities.

Thanks to modern technology, porky and high-riding SUVs handle better and better with each passing year. The SQ8 weighs 5,280 pounds and its roof sits 67.2 inches off the ground, which makes it really difficult to comprehend why it moves the way it does on windy roads. On straightaways, sure, it's not hard to put 500 horsepower down to the ground, especially when you have an all-wheel-drive system as smart as Audi's Quattro, but to mask all that weight on back roads covered in slush? That's a different story, yet that's what the SQ8 does.

The SQ8 slaps, as the teens say. Everything comes together perfectly here; everything feels cohesive and well-executed. Even in the best of Benzes, for example, you can always feel that bit of a clunk where the transmission doesn't fully gel with the engine—that split second where you can tell they're two separate components not working in perfect unison. I have similar gripes with newer BMWs. You never feel that in the Audi, not with the drivetrain, not with anything.

Give it the beans from a standstill, and it's probably the smoothest and most linear acceleration you'll feel ever feel this side of a Rolls-Royce or electric car. Stand on the brakes, and you feel the 15.8-inch front rotors bite down hard while the eight-speed downshifts in a hurry. Meanwhile, Quattro keeps you stable and pointing in the right direction despite the road conditions. (My tester was equipped with all-season tires in lieu of full winters, but it never seemed like a problem despite encountering considerable snow during five out of seven days.)

It's the same story with the steering, which is weighted perfectly for each programmable driving mode, Allroad, Comfort, Auto, and Dynamic. Thanks to 2021's interminable winter, I spent most of my week in Allroad mode, which offered a light steering, relaxed pedal reaction, and somewhat compliant suspension. For my taste, the damping was always too stiff regardless of driving mode, but this is an SQ8 and not a run-of-the-mill Q8, I suppose, so that's to be expected.

On Dynamic mode, however, the same stiff suspension and the optional active roll stabilization system (part of the $5,900 Sport Package that also includes Quattro sport differential and red brake calipers) made me believe the SQ8 wasn't an SUV, but an actual sports car. Now, I'm not talking 911 levels of performance here, but definitely something much lighter and lower-riding.

Say what you want about its looks, its odd place in the Audi hierarchy, and its eye-watering price tag, but if there's one thing the SQ8 excels at, is putting a smile on your face when the tach needle nears the red. And the 4.0-liter V8's bravado is also relatively unexpected on a refined vehicle like this, but it's quite welcomed (and very intoxicating).

This is a tough one because the Q8's slightly coupe-fied shape makes it inherently not as practical as a "normal" SUV like the Q7. However, it's not as dramatic as the Mercedes-AMG GLC 43 I drove last year, so it doesn't lose a whole lot of practicality either. It's somewhere between a regular SUV and an SUV coupe.

Trunk space is aplenty for most everyday needs at 30.5 cubic feet, with the option to fold down the backseats and free up to 60.7 cubic feet of space to carry whatever folks who can afford $100,000+ two-row SUVs carry. Probably boxes of expensive wine or carbon fiber surfboards or something. I don't see the average SQ8 owner as someone who regularly visits the farmer's market or Ikea. They probably have Whole Foods delivered and all furniture brought to their home already assembled.

That being said, the second-row seats are very comfortable, offer plenty of legroom for kids and adults alike, and my daughter truly enjoyed being able to control both rear windows—and their respective sunshades—from either seat in the back. The rear also featured its own array of equipment to keep your friends, parents, little ones, or fur babies happy, with two LATCH car seat anchors, heated seats, two USB power outlets and one 12-volt. More impressively, however, is that the rear also has two separate climate zones, meaning that Backseat Rider 1 can set a different temperature and fan speed from Backseat Rider 2. If this doesn't keep your kids happy on a road trip, nothing will.

Fun fact: all the charging ports in the cabin light up when the headlights are activated, making them extra easy to find at night.

There's no shortage of tech in the SQ8. Like in most Audis, an impressive array of advanced driver-assistance systems, comfort features, interior and exterior lighting, sound, and a dizzying amount of other customizable settings are available standard or as options.

It didn't take me long to get over the SQ8's price, as the more I drove it, the more I appreciated what it brought to a segment where "more" usually means better. It's nimble, has an incredibly well-put-together cabin, is extremely fast in a stealthy sort of way, and that engine purrs in all the right notes.

In retrospect, I'm not really convinced about its target customer. For an SUV, it really isn't any more practical than, say, an S7 Sportback—not to mention the RS6 wagon—considering those trunks are also pretty large. And considering the SQ8 doesn't have a third frow, its seating capacity is the same as a sedan's.

Regardless of who it's for, there's no denying that if you have more than $100,000 to blow on a car and you're stuck on a five-seater SUV that goes like hell, the SQ8 doesn't offer just that, but also a fly-under-the-radar approach that very, very few competitors currently offer.

If you're left wanting even more, there's the RS Q8, which we've described before as an MMA heavyweight in a Hugo Boss Suit. But for everyone else, the SQ8 will do pretty much everything you need, and then some.