Audi S8 Plus Romps With the World’s Fastest Four-Doors

With 605 horses, a 190-mph top speed, and a quarter-mile time to match Tesla’s Model S P85 D, the Audi flagship dazzles on its farewell tour. 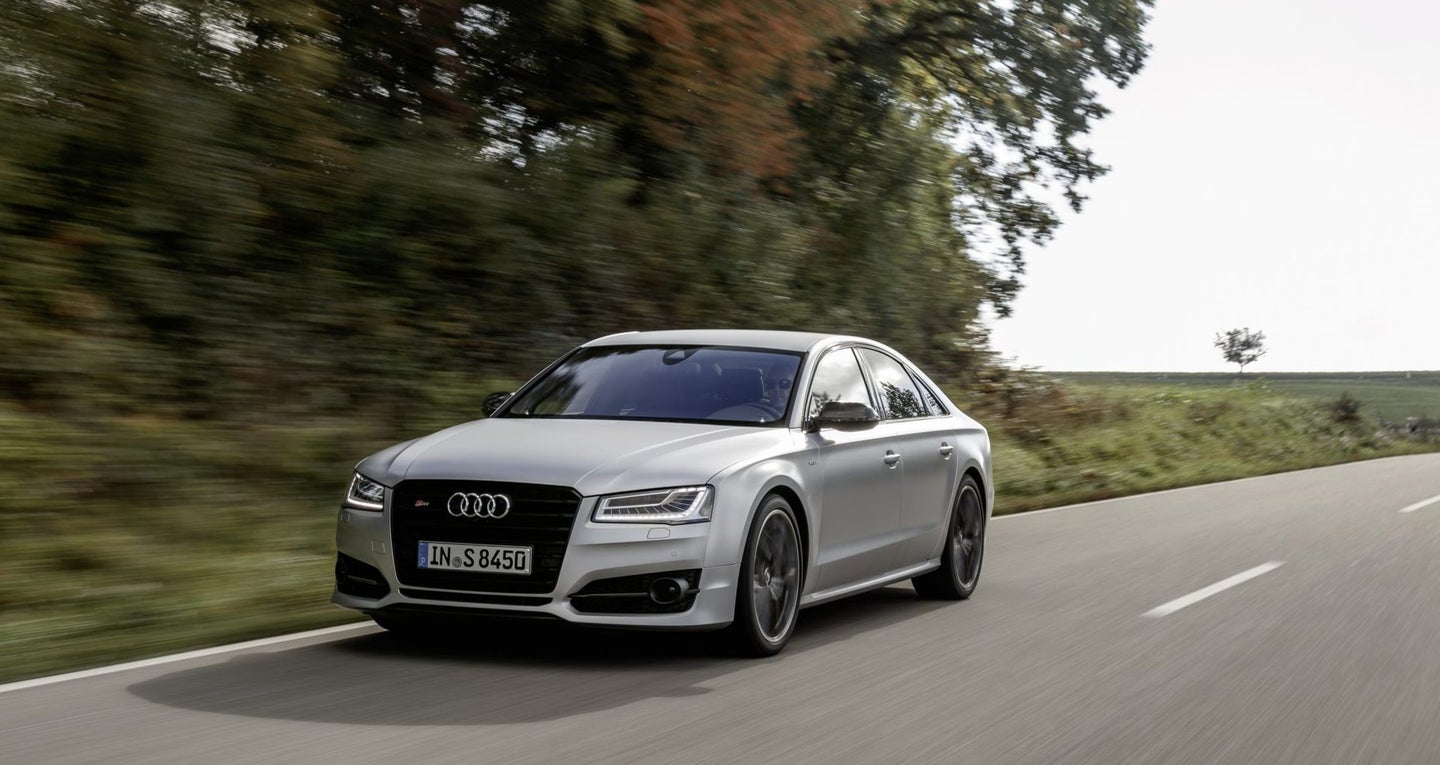 Some classes of automobile are like games of tic-tac-toe—full-size pickups are one example, flagship luxury sedans another. Mercedes, say, makes the first move with an all-new S-Class. BMW draws up a redesigned 7-Series, and so on, until every company has filled in a blank and hopefully blocked its rivals. Stalemates are often acceptable, but losing the game outright is not.

Audi’s move is fast approaching. A fourth-generation A8 sedan is bound for America in the 2018 calendar year, the first clean-sheet Audi under the tutelage of new design chief Marc Lichte. That flagship—lightened but stuffed with semi-autonomous tech and design cues from the Audi Prologue concept—adopts the MLB platform that also underpins the smaller A4 sedan and the Q7, plus the Bentley Bentayga SUV.

For Current A8 Lineup, Last But Not Least

Until Audi puts an “X” on that game board, they’re hoping to draw a few “oh’s” with their 2017 A8. Or, for a truly pyrotechnic encore, the 2017 S8 Plus 4.0T. That S8 Plus may not boast Audi’s very latest platform, styling, or computing power, but certain buyers will prefer its old-school internal-combustion power: 605 horsepower from a 4.0-liter twin-turbo V8, with 553 pound-feet of peak torque in full-throttle overboost mode. That's 85 more horses and 73 more pound-feet than the S8 of 2016. LIke its RS7 stablemate, the S8 Plus' chassis and powertrain were tuned by Audi Sport, the division formerly known as quattro GmbH. Truly, the S8 Plus is an "RS" in anything but name.

With its snappy eight-speed Tiptronic automatic transmission, the S8 Plus can skedaddle from 0-60 mph in a 3.3 seconds. That’s quicker than a 577-hp Mercedes-AMG S63 and may even nip the BMW B7 Alpina, with its 600-hp, 4.4-liter twin-turbo V8. The Audi’s quarter-mile time of 11.6 seconds matches a Tesla Model S P85D. Yes, the numbers are insane.

But those numbers barely describe what it’s like to drive a 4,700-pound sedan that inhales pavement the way Van Halen used to snort cocaine. The S8’s appetite for speed (not Destruction, that’s another band) feels unquenchable, including a 190-mph top speed that defies the Audi’s size and ostensible luxury mission. Even that top speed is electronically limited, boosted from 155 mph via the $11,000 Dynamic Package that includes massive ceramic brakes with gray painted calipers, a carbon-fiber decklid spoiler, and a rowdier black-tipped sport exhaust. My tester tacked on a $5,500 Black Optic exterior package that wraps the front fascia blade, mirror housings, and rear diffuser in carbon fiber, and the single-frame grill and windows in black trim.

A Subtle Kind of Face Punch

Cloaked in Mythos Black paint (really, what other color would you choose?) the Audi looked ready for a sequel to Ronin, the 1988 John Frankenheimer-directed, Robert DeNiro-starring spy thriller whose car chases rank among Hollywood’s best. One propulsive scene has an Audi S8 duking it out with a Citroën XM on the streets of Nice, France, including the obligatory destruction of a farmers’ market and sidewalk cafés. Other action fans may cite the pair of Transporter sequels that put a nattily suited Jason Statham behind the wheel of a black A8 W12. This latest S8 Plus is still a stealthy, conservative blank slate, perfect for a private-security CEO or the shady character he’s trying to nail. Somewhere, there’s a well-compensated Russian hacker driving an S8, which he’s chipped for even more law-flouting performance.

Before you picture some overwrought hot-rod sedan akin to Mercedes-AMG’s of vintage era, be advised that the AWD Audi puts those 605 horses to the pavement beautifully. There’s no strain on occupants, no squealing or squirming tires. Among the flagship fleet, the Audi is also one agile clipper ship, in part because it’s based on the short-wheelbase A8 that’s no longer sold in the States. (America’s A8L, with a 122.9-inch wheelbase and 207.4-inch overall length, extends about five inches longer in both measures). The downside is a rather stingy 38.7 inches of rear-seat legroom, on par with a midsize Honda Accord or Toyota Camry. The upside is dynamic performance. The S8’s brakes are larger and its air suspension firmer, especially in the Dynamic setting accessed via its Multi-Media Interface (MMI) controller. The brakes could return a bit more pedal feel, even with the optional ceramic stoppers, but they easily hauled the S8 down when it threatened to loose the bonds of gravity.

The Audi won’t be confused with a sports car, but handling is remarkable considering the mass it’s hauling around. Credit a slick torque-vectoring rear axle, part of a rear-biased Quattro AWD system, for the S8’s ability to rotate that big bod and dig out of corners in a way you can really feel. Some testers have groused about Dynamic Steering, which automatically varies the steering ratio and assist level based on your speed or driving mode. But while the steering can feel a bit thick at times, it’s finely reactive and forges a confident handshake with the road. Slushy, icy country roads north of Manhattan could have been a nightmare, but the Audi’s crushing assurance transformed them into a summertime dream cruise—a feeling aided by 21-inch Pirelli SottoZero winter tires on handsome double-spoke, titanium-finish wheels.

No Longer the Freshest, Still Quite Fresh

On the negative side of the ledger? As with some other electronic transmissions, the Audi’s yacht-like console shifter can stumble when you’re in a hurry to find reverse, or drive. And due to the realities of product cycles, some lesser-priced Audis, including the Q7 SUV and A4 sedan, flaunt newer clothes than the aging A8 and S8. The MIA features include Audi’s Virtual Cockpit, the reconfigurable driver’s display that’s colorfully animated by a fast Nvidia processor. There’s not even a USB port, unless you spring for a $129 music interface cable. But if you don’t live and die for the latest features, the S8 Plus still feels pretty damn posh. (Don’t forget that, until the latest S-Class stole its thunder, the A8 was the consensus leader in cabin design among flagship sedans.) Seats are tremendous, including the strongest-fingered massagers in the business. The enduringly rich impression was boosted by a $5,500 Audi Design package that includes bonus leather on dash and doors; seats with Audi's top-shelf, diamond-stitched Valcona hides and Arras Red piping; and striking carbon-fiber twill trim with crimson inlays. Nor does the Audi skimp on gizmos, including a subscription-based mobile WiFi hotspot with Google Earth maps and options such as infrared Night Vision, adaptive cruising in stop-and-go-traffic, and active lane assist.

Performance at a Price That Undercuts the Competition

Crammed with options, my S8 Plus reached precisely $148,000. A glass-half-empty view might call that a lot of money for an Audi sedan whose replacement will be unveiled this summer. The fuller view says it’s a reasonable deal in light of BMW’s and Mercedes’s far-pricier performance flagships—not to mention the Audi's genetically-similar corporate compatriot, the Bentley Flying Spur. The BMW B7 Alpina starts from $137,995, and the Mercedes-AMG from $145,625, compared with just $116,850 for the Audi. The British Bentley shares the Audi’s platform, transmission, and 4.0-liter V8, but with 500 standard horsepower versus the Audi’s 605, and less-sporty handling. The Flying Spur also starts around $200,000, which is a whopping $84,000 more than the S8 Plus. We’ll grant the Bentley’s loftier brand name and superior hand-built interior, but $84,000 is enough to park a second, six-cylinder A8 3.0T in the family garage.

However you view its cover charge, the S8 Plus is one hell of a farewell tour, fast enough to blow through town before you can flick you Bic.