No, Audi's full-size sedan will not drive itself. But any other feature you can imagine in a modern car, the A8 probably has it. 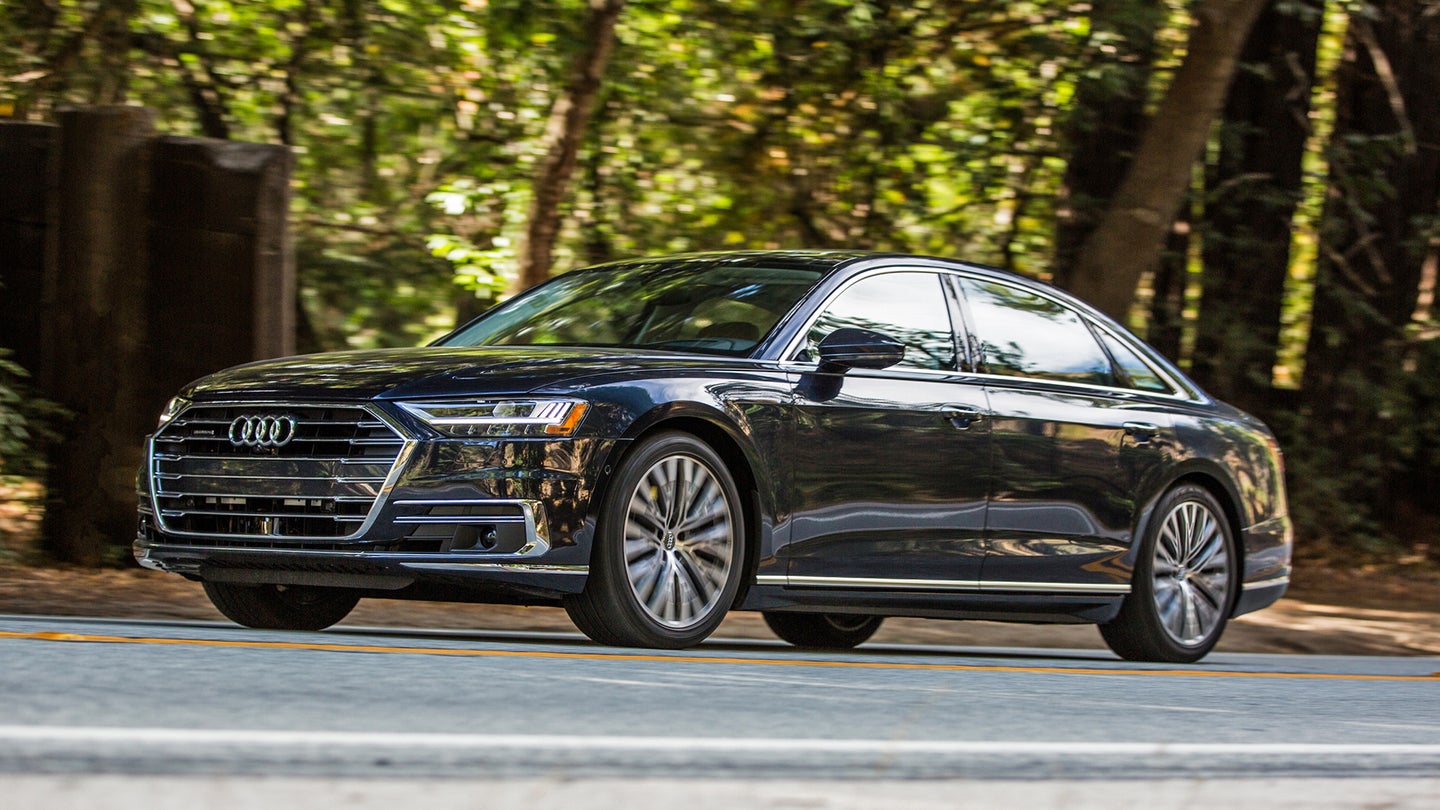 The new 2019 Audi A8 takes risks. The 2019 Audi A8 also plays it safe. That sounds like a dichotomy, but it's more a market reality: This A8 pushes technological boundaries like no Audi flagship sedan before, even as the company is bound by conflicting consumer desires and regulations in China, Europe, and America.

One element seems both safe and a risk, depending on your vantage point. That’s the exterior design, where Audi doubles down on the conservative-to-a-fault philosophy that’s never done the A8 any favors in the image-conscious U.S. market. In the best of times, the A8 has been the fourth choice in flagship sedans, behind the Mercedes-Benz S-Class, BMW 7-Series, and Lexus LS. The retiring A8 found just 1,599 fans here last year, a 49-percent plunge. Meanwhile, Lexus’s new, imposingly styled LS is defying the conventional wisdom that Americans are through with sedans: The LS’s 9,302 sales in 2018 represent a remarkable 127-percent jump, and place it second only to the S-Class with its 14,978.

In Los Angeles’s Venice Beach, where I parked the car formally known as the 2019 Audi A8 55 (3.0T) TFSI Quattro Tiptronic at an AirBnb, I expected the stretched, tuxedo-formal Audi to draw some stink-eye from the dreadlocked, faux-homeless hippies who frequent the area. But the Audi passed unnoticed and unremarked upon, a scene that repeated itself over three days in LA and Palm Springs. To the iconoclasts who’ve always preferred the A8, this unadorned, German-airport-limo may seem the perfect stealth sedan. But when it comes to winning recruits from other luxury brands? Your guess as to whether this strategy works is as good as mine.

There are fine details here, as on any Audi, but you’ve got to look twice. Unlock the doors, and LED and OLED elements trigger a cascading light show in the headlamps and taillamps, along with a blue-diode burst from the optional, $2,300 Night Vision system. A tasteful band of brightwork ribbons the lower door sills and rear fascia, with chrome humps that look like exhaust outlets but aren’t. Even the ribbed, hexagonal Audi grille appears more formal than forceful on this nearly-209-inch-long sedan.

As for potential market risks, Audi might take heart from the Lexus’s warm reception: Like that LS (which also offers a hybrid version), the 2019 A8 is offered only with a gasoline V6 in America, at least for now—the brand’s familiar 3.0-liter, turbocharged, direct-injected V6. It’s worth mentioning, though, that Lexus’ 3.5-liter twin-turbo V6 performs a convincing imitation of a V8, pumping out 416 horsepower and 442 pound-feet of torque. Audi’s is a wonderful V6, but with a comparatively slight 335 horsepower and 369 pound-feet, you’ll never fool yourself that it’s anything but a V6—especially in an A8, whose Volkswagen MLB platform is lighter, but whose lavish equipment bumps curb weight to 4,751 pounds, 250 more than before. Americans who insist on eight cylinders in their country-clubbing sedan must wait ‘til later in 2019, when a V8 model arrives—likely the brand’s 4.0-liter biturbo—followed by high-performance variants including a new S8. Those will cost much more than this A8, which starts from a reasonable $84,795, and rose to $123,045 with the addition of nearly every option in Audi’s leather-lined playbook.

Still, this is a sedan born for blissful cruising, so the need for a V8 is debatable. (Fuel economy may be another story, considering the AWD Audi’s so-so 19/27 mpg rating in city and highway barely beats V8 rivals from Mercedes and BMW and sits virtually atop the 18/27 mpg of the Lexus LS 500 AWD that boasts 81 more horsepower and 73 extra pound-feet.) I rarely found myself wishing for more power, aside from the odd pass on two-laners where the Audi might have shown a skosh more urgency. Audi cites a useful 5.6-second run from 0-60 mph, aided by an eight-speed, paddle-shifted ZF automatic transmission; there's also a mild-hybrid 48-volt electrical system to recoup some energy and power accessories and driver assistance systems.

Under Hockney-blue skies in California, the midnight-blue Audi felt magisterial, supremely relaxing. Double-pane windows heighten the sense of isolation. A honeyed, adaptive air suspension turns mountainous bumps into molehills. In the Drive Select system’s full Dynamic mode, the steering effort turns needlessly heavy, unsuited to the car’s personality. But with its powertrain and suspension set to “Dynamic” and the steering in “Auto,” the Audi dispatched coastal roads and freeway on-ramps with pleasing grip and grace.

On a car this expensive, the dynamic four-wheel-steering system seems an easy add at $1,950: By counter-steering the rear wheels by up to 5 degrees at parking-lot speeds, the system trims 3.3 feet from the A8’s turning circle, making it shorter than a compact A4’s. (It can even automatically dial in extra front steering when required.) The system further keeps things planted a high speeds by turning rear wheels in phase with the fronts. Later this year, we expect to see an optional new electromechanical suspension, akin to Mercedes-Benz's Magic Ride Control, that can scan the road ahead and adjust individual wheels to further tame the ride.

On the subject of tardy (or outright missing) technology, I never let General Motors get away with it, so Audi should be no different: As early as 2017, promised its all-new A8 would be the closest thing yet to a self-driving showroom car; allowing so-called “Level 3” autonomy that would allow drivers to safely turn things over to a robo-pilot and actually turn attention to non-driving tasks. I’m deeply skeptical that that was ever the case—we at The Drive consider Level 3 autonomy the greatest fairy tale in autodom, masking potential mortal danger under an illusion of fail-safe security—but I’ll be tackling that in another story. As it stands, Audi has shelved plans to offer its “Traffic Jam Pilot” in America and Europe, but only after eliciting more than a year of fawning and buzz from the click-hungry tech and auto media. The little button that purportedly would have let the Audi “drive itself” in a tight set of conditions—below 37 mph, on divided highways and in heavy traffic—has disappeared from the console of the production A8. Explaining the decision, Audi spokesman Mark Dahncke pointed to everything from inconsistent road markers in America to a crazy quilt of laws and regulations to irresponsible drivers who may use the system improperly. And Audi's decision may be wise. But when Audi or any automaker talks a big game on technology, basks in the resulting hype, and then suddenly says, "Never mind," it deserves a kick in that corporate grille.

Yes, the A8s being shipped here are still stuffed with pricey driver-assistance hardware, including multiple 360-degree cameras, mid- and long-range radar, 12 ultrasonic sensors, even a LIDAR scanner (a production-car first) to deliver a more-accurate picture of the road ahead. The onboard gear we do get allows the Audi do some cool things, but there’s little we haven’t seen before, such as warning and preventing occupants from flinging open a door into the path of an oncoming cyclist or car. (One interesting feature: A new predictive capability lifts the Audi’s chassis by 3.1 inches, in less than a half-second, to better protect occupants in side impacts.)

But as far as self-driving impressions, this A8 is literally behind the curve of GM’s Super Cruise, or any Tesla with Autopilot. In practical highway terms, the A8 is largely limited to stuff you expect on any Honda or Subaru: adaptive cruise control with blind-spot monitors and automated braking. There’s a lane-keeping function with mild automated steering assist, but it’s designed as a strictly hands-on affair. As on other Audis, the lane keeping works okay when road markers are ideally set up, but badly when they’re not: My A8 ping-ponged between even clearly-painted markers, veering too close to the edge for my comfort. At other times, the A8 threatened to leave its lane entirely, forcing me to assert control. The adaptive speed function is at least reliable, smoothly regulating the A8's pace in surrounding traffic.

Fortunately, if you’re not obsessed with the latest in robotic chauffeurs, the rest of the A8’s technology is often spectacular. It's showcased in a cabin that takes Audi's ethos of minimal design, advanced tech, and impeccable materials to a new level. If it's not a baroque-beautiful stunner like the S-Class, the Audi's quarters offer more discreet pleasures. Compared to the departing model, this A8 eliminates 35 hard buttons and switches—including its familiar go-to, the rotary console MMI knob—in favor of an incredibly minimalist layout dominated by a stacked pair of black-panel screens (10.3 inches for the upper, 8.6 for the lower). Discreet, flush-mounted electronic sliders on the dash face control the air vents, including wood-veneered panels that drop down to discreetly hide the vent faces. The horizontal dash recalls the counter of a bespoke jeweler; if a tray of Van Cleef & Arpels diamonds slid out from it, I wouldn't be shocked.

The smartphone-style “MMI Touch Response” lets you reposition tiles on the screen, and save one-keystroke shortcuts for just about anything, from radio presets to navigation destinations. Those haptic screens adjust for three levels of pressure sensitivity, as well as one with no feedback “click” at all. Those big screens do attract equally sizable smudges, perhaps the reason my press car included a soft cloth in the console to wipe away fingerprints. (Is this where I cop to enjoying an amazing, LA taco-truck lunch inside the A8?)

I honestly missed the trusty MMI knob at times, but the new system’s learning curve is fairly painless. Redundant steering wheel controls or usefully natural voice commands can also call the controlling shots. Audi’s underrated handwriting pad, once located atop the MMI knob, becomes a selectable function of the much-larger climate-control screen. More annoying was the way the Audi—despite storing some 700 personalization functions for up to seven users—wouldn’t let me (or a passenger!) perform some duties while in motion, including connecting a phone. Another head-scratcher is the interior door handles, which are set upside-down from the traditional position, forcing you to grab the underside of the handle to pop the doors.

A well-cocooned run from Palm Springs to Los Angeles showed the A8 at its best. My backseat passenger settled into a vigorous reclining massage, serving as guinea pig—actually, more like a chinchilla—for the Audi’s optional, $7,550 Executive Package. That two-bucket Executive layout adds a toboggan-shaped, ambient-lit rear console and a detachable digital tablet, allowing control freaks to direct everything from window shades and the dual sunroof to seating, audio, video and wifi. The right-rear Executive seat even adds a foot rub: The front shotgun seat slides fully forward, and a footpad drops from the deep-welled seat back to soothe CEO tootsies. For another $5,900, an optional Bang & Olufsen system rocked through 23 speakers, with 1,920 watts. Between my head-up display and Google-mapping, 12.3-inch Virtual Cockpit, the new double-decker screens and rear digital tablet, and two silvery, wifi-connected iPads mounted behind the front headrests for another $3,250, this A8 had seven controllable displays for a maximum four occupants. Drop that Exec package, and three adults in the rear will share a vast 44.1 inches of rear legroom...and fight for control of the two iPads.

Have I left anything out? Because Audi sure hasn’t. Well, aside from the self-driving A8 the carmaker promised.

Lawrence Ulrich, The Drive’s chief auto critic, is an award-winning auto journalist and former chief auto critic for The New York Times and Detroit Free Press. The Detroit native and Brooklyn gentrifier owns a troubled ’93 Mazda RX-7 R1, but may want to give it a good home. Email him atLawrence.ulrich@gmail.com