Is it supposed to be big and luxuriant or sporty and nimble? Uniquely high-tech or easy to use? Stately, or aggro? The answer seems to be: Yes? 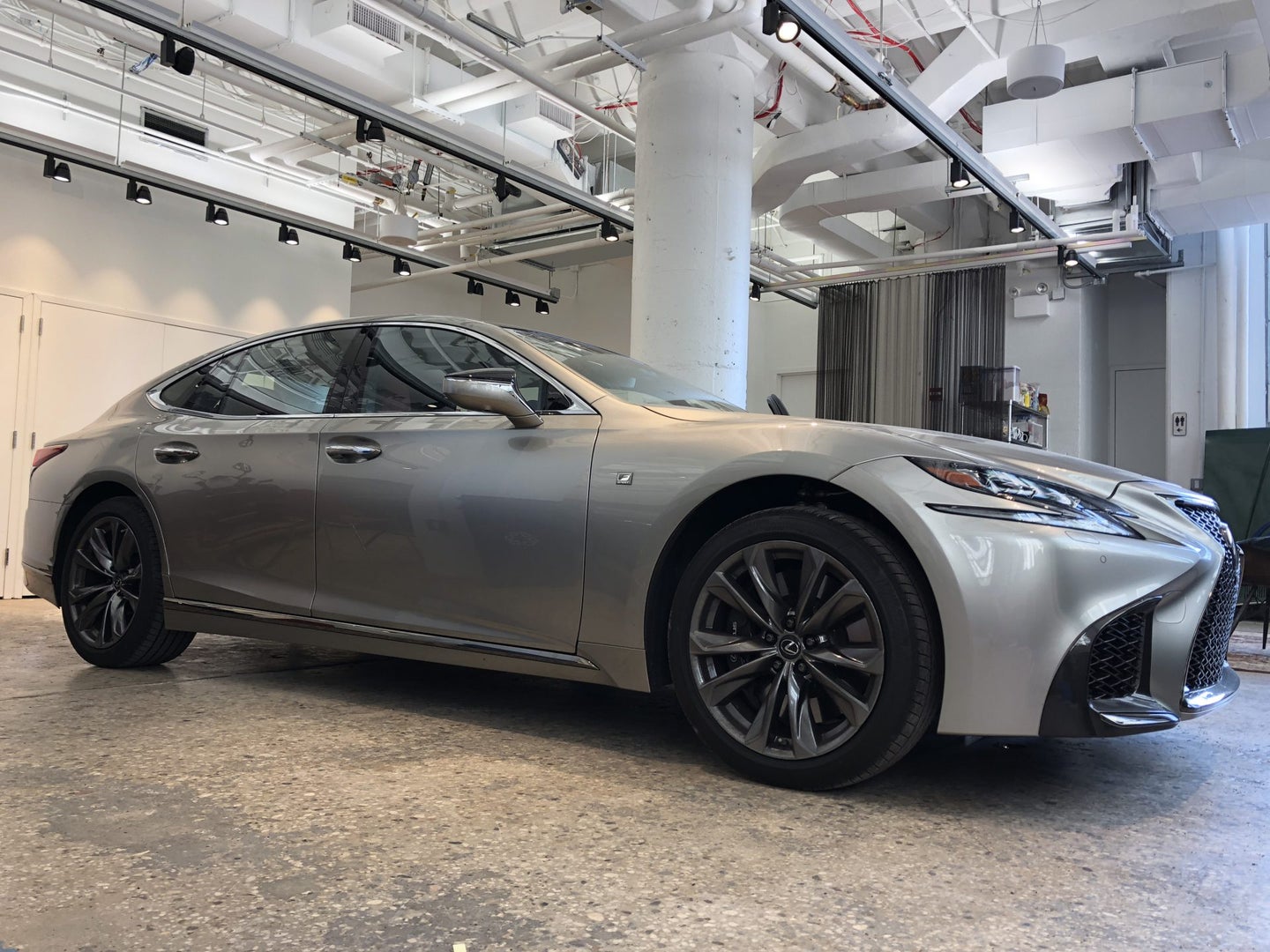 Welcome to Critic's Notebook, a quick and off-the-cuff car review consisting of impressions, jottings, and marginalia regarding whatever The Drive writers happen to be driving. Today's edition: the 2018 Lexus LS 500 F Sport.

It was only recently that Lexus took a turn for the sporty. For a long time and up until recently, the company was mostly known for big, soft, comfortable, luxurious sedans that were pleasant and quiet to drive. The cars were valued for reliability over performance, and came with the perception of a certain savvy value (which was not to say the cars weren't luxurious, because they were, if understated—not showy) and a smattering of technological gimmickry.

Even re-reading that description summons a picture of my grandfather, who used to put long miles from Florida to Cape Cod on various big Lincolns and Mercuries and Cadillacs. As a demographic, old-guy driver is reliable—traditionally loyal, doesn't mind spending—but always shrinking, and no brand wants it as its face. And so, at some point, Lexus decided to change its identity from sedate to sporting, introducing a two-seat (and single model-year) LFA supercar in 2010; a hyper-aggressive evolution of the L-Finesse design language, in 2011; and, more recently, a continued development of its sport sedans, and finding good use for a big 5.0-liter V8 engine.

Except Lexus's pivot happened at exactly the wrong time. Developing proprietary in-house infotainment technology became a money-burning exercise once the Big Tech world-eaters got into the automotive game: customers demanded instead that their cars either used or played well with slick, established interfaces from Apple and Google. Tesla changed the entire definition of what a "high-tech luxury sedan" was supposed to be in 2012, with the Model S—then changed the shorthand for "performance" with sub-three-second 60 mph sprints in Ludicrous mode.

The entire world—including, until only recently, America—decided that vehicle emissions were not only an issue but a solvable one; car companies reacted with a flurry of innovation, pulling more from less: higher output from lower displacement; higher mileage with fewer emissions. The idea of electric cars moved into the mainstream—even seemed sexy, on occasion.

Also, the sedan market started dying with the same alarming rate as all those disappearing bees.

Into all this comes the Lexus LS 500 F Sport—a massive, soft, comfortable, luxurious sedan with "Sport" inexplicably in its name, home to one of the most hopeless user interfaces ever devised, with a conventional (though good) V6 engine and every interior texture known to man. It is, at a glance and on contemplation, a bewildering car—but maybe a good way to understand the various and sometimes conflicting messages Lexus is sending at the moment.

On a modern infotainment system, where most everything from the radio to climate control to a seat massager is controlled through an infotainment interface, a driver arguably interacts with this more than anything outside of the wheel or pedals. Lexus's infotainment interface—the system by which a driver makes those choices, from finding a different station to pumping up the AC to using the Navigation system to find an address—is no longer new, but it remains an almost perfect failure. I've never found anything quite so difficult to use; imagine trying to use a trackpad to play a maze game with half your attention, while also going 40 mph and trying not to kill any pedestrians, and you have the sense of what every interaction using Remote Touch was designed to feel like. It looks complicated (because it is complicated), feels ancient, mostly doesn't work, operates using an inscrutable system logic (see video, below), and surely has pulled off the once-thought-impossible trick of equally alienating both early adopters and tech-phobic older buyers. Surely, there is a countdown somewhere in Nagoya, Japan, to show when the R&D costs for the system have been amortized, and it can be taken out back behind the shed.

I'm bringing up the Lexus's absolute worst feature first, because it is one of the first things a driver interacts with, and it starts creating frustration with every interaction, and that frustration keeps building. I'm sure you get used to it eventually, and gain some expertise in its use—and, yeah, read the directions or whatever—but there is no rational way to defend Remote Touch. It is a badly-designed system that Lexus will be glad to see tossed, and the name sounds creepy, besides.

Here's seven minutes of The Drive's Cait Knoll and me trying to use this system, at a standstill in our showroom, and mostly failing:

The Lexus LS 500 looks enormous, and it's bigger than that. But it carries its size well: the look is athletic, with muscular proportions and a low center of gravity. It is handsome from several angles but most striking from the front, which is overloaded with design. It features both a chasm of a front grille, like an enormous insectile orifice; flowery Z-shaped headlights that look like bejeweled, feathered crystal "Zorro" signatures; and—for visual counterweight to the headlights—more zigzagging in the form of darkened mesh air intake covers. It is hard to miss and easy to remember, which is likely the point, even if it seems like to belong on another car entirely. The Lexus design language has been polarizing among people who write about cars for a living, but I've found that people who love it, really love it.

The fit of the body panels and finish of the paint were up to Lexus standards, which is to say superb. It looks suitably imperious and expensive. Many golf clubs can be held in the trunk.

I believe I understand the intended effect Lexus was going for with its interior, which overlaps intricate and finely crafted panels of varying materials and textures: the idea of always finding a new detail wherever you look—elaborately pleated leather or patterned metalwork or herringbone wood trim—sounds whimsical. It is expertly done, but it's also busy to the point of visual incoherence, of anxiety—especially in conjunction with the bright red sport seats that come in the F Sport trim, and the striated metallic dashboard trim that stretches across the cabin like a suspension bridge.

Aside from the disastrous Remote Touch, the most notable technology—and similarly not in a good way—was the cross-traffic alert, which blasted silhouettes and arrows in flashing yellows and oranges, panicked and mostly incoherent. (If you are one of the people apparently demanding that automakers design cars that constantly narrate the world both inside and outside the car in a nervous shout, you need to stop, because they are making them, and they are insufferable.)

The LS 500 has the type of features and amenities one needs to compete with the big BMW and Mercedes and Cadillac models—absent any notable self-driving technology, like GM's SuperCruise—like reclining rear seats, powerful seat- and steering wheel heaters, seat massage, a rear-passenger touchscreen, easy-open trunk, and a panorama glass roof.

But those sport seats are a problem in other ways, too. They are aggressively bolstered—in keeping with the "Sport" theme—and keep you held snug. This is the opposite feeling one wants from a large executive sedan, which should pamper with spaciousness and ease. The effect is not claustrophobia as much as a subtle rewiring of your brain, and not in the car's favor: it creates a feeling of enclosure by which the interior is made to feel smaller than it is. (That is: quite large.) The effect in the back seat is the same.

Sport seats are not designed for long-term comfort, and these were no exception. I can find no argument for putting short-haul seats in a long-haul specialist, let alone make it its own trim level, unless the performance is spectacularly compelling.

In case you were wondering if the performance is spectacularly compelling, it is not. The steering is forgettable and though there's plenty of power from the 3.5-liter V6, with 416 hp and 442 pound-feet, low-end response can be sluggish—at one point trying to catch a break in traffic and instead catching the engine off-boost and in between two of the many, many gears (10 in total) I planted the throttle into the floor, looked around, and had time to wonder if it was connected to the engine at all before a sudden fit of acceleration—it is a wonderful interstate sled, quiet and smooth and happy to be on the go—at 85 mph, even on bad highway, the big Lexus requires minimal guidance, two-finger steering; the car calls for classical music played very loud—and which will sound wonderful coming from the optional, $1,940 Mark Levinson audio system—and perhaps a cigar, as you glide past slower traffic.

It is a small and for most people likely minor complaint, but the brakes are very hard to modulate at slow, parallel-parking speeds. It's no surprise—it's a big, heavy car. But maneuvering it onto our lift at the Brooklyn offices was surprisingly nerve wracking. The car barely fit on the lift, so there was a real possibility of dropping the front off the edge while trying to clear the back end; this made it especially fraught when easing off the brake to inch the car forward—as the brake pedal lifted, the car would hold, hold hold, then luuuurch several inches forward at a time. The same effect was recreated, if less nervously, while parallel parking behind a Ferrari.

My complaint about the F Sport is less about exactly how sporty it is (that is: not very) and more about why make a sporty version of a car that's best loved for it's pillowy ride at all? (I remember the first time I drove a Rolls-Royce Phantom, which felt like piloting a nuclear-powered hot air balloon, and the driving appeal of Toyota's luxury badge, which was lost to me before, became clear immediately. "Oh," I thought, "a Lexus is just an accessible version of this sorcery.") Even the 20-inch wheels that come with F Sport ruin the magic carpet ride over rough pavement and cobblestones, and the twin-turbo V6, which would be considered admirably throaty and sporting on another car, sounds snorty and out of place.

Of course, Lexus has a team of people who determine which products have the best chance of performing in the market, which suggests the answer to the "why" question is, "Because people will buy it." And if someone's happy with the trade-offs, then good on them. They will most likely enjoy the Lexus experience, from showroom to service, and its reputation for excellent reliability and build quality. But if it were my money, I'd drop the $9,700 F Sport trim and instead put it behind the LS 500's strengths—spaciousness, luxury, a smooth quiet ride—and opt for the Executive Package with the cut glass and Executive- and Luxury- everything. Let the car be what it wants to be—spacious, luxurious, with a smooth and quiet ride, for around—even if what Lexus wants to be at the moment isn't quite clear.

The latest Lexus flagship shines brighter and drives better with one of the industry’s strongest V6 engines.