Amped-up looks, a rich interior, and surprisingly sophisticated performance make this the ES for serious drivers. 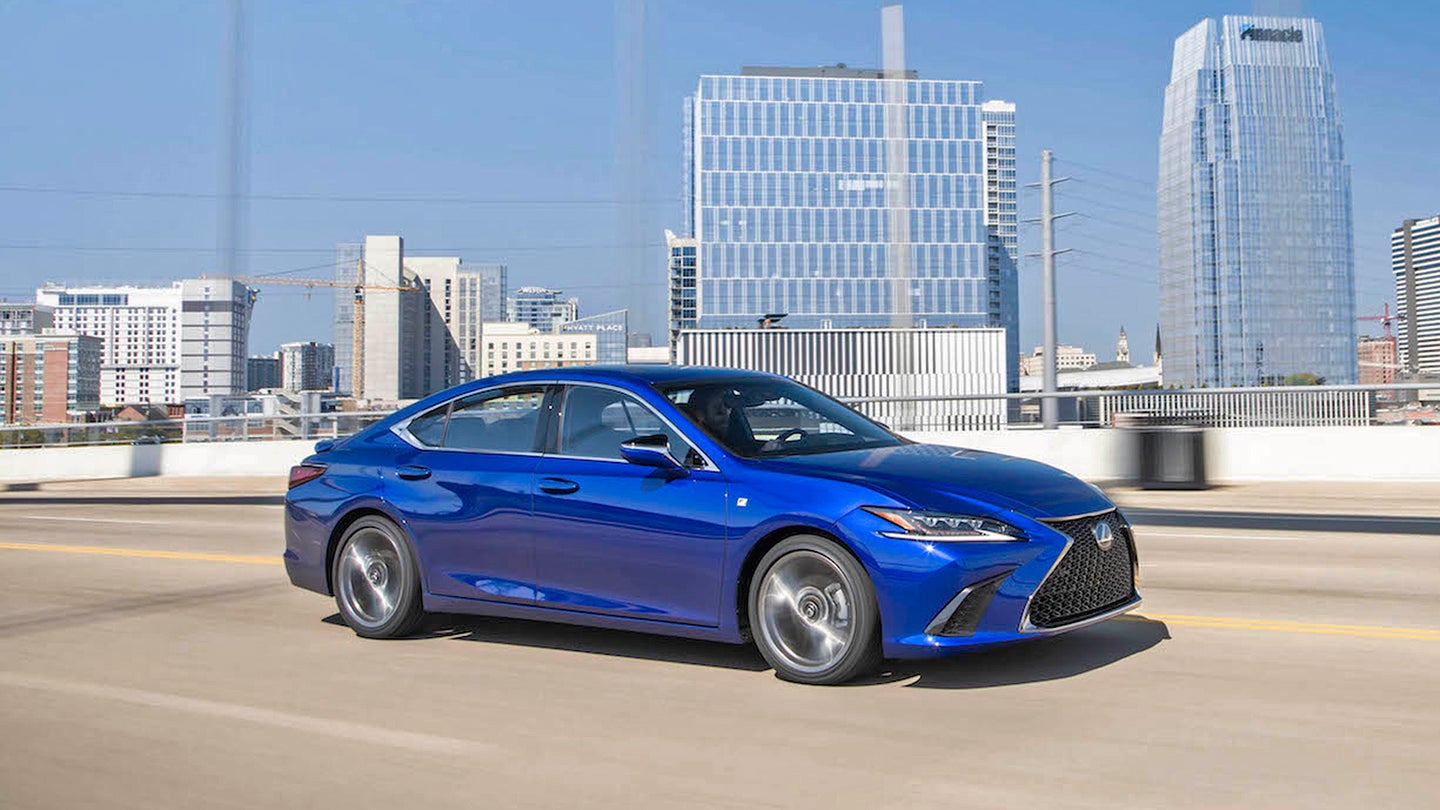 Pick a sedan, any sedan—even such holies as the Honda Accord or BMW 3 Series—and you’ll find a car that’s been bloodied in the marketplace by those bully-boy SUVs. The saddest part is that their own brothers are administering the showroom beatdowns (typical, right?), as with the Honda CR-V and BMW X3 crossovers that have become, by far, their brands’ best-selling models. And as a result, when we auto journalists chart the shocking downfall of sedan sales—or witness Ford’s and Fiat Chrysler’s craven, short-sighted retreat from that market—it begins to sound like there’s something inherently wrong with the modern sedan.

But there’s not, as a four-door like the 2019 Lexus ES 350 F Sport makes abundantly clear. This smartly retuned version of the more-sedate ES 350 ranks as a happy surprise among all-new 2019 models I’ve driven. This isn’t a flinty-riding, leash-straining Mercedes-AMG or BMW M car, nor is it trying to be. But to me, this Lexus delivers the luxury experience that a solid majority of sedan buyers—or even just the ones who are left—would dream about. It’s roomy, comfortable as hell, beautifully finished inside, and exudes power and elegance from the curb. It makes driving feel like second nature, with a chassis and steering that precisely balance the scales between buttoned-down control and relaxation.

Lexus’s early “F Sport” treatments sparked some eye rolls. But as with the underrated GS F Sport, it’s time to give Lexus its due. Yeah, I get it, this ES is front-drive. But don’t scoff until you try it: Led by engineer Yasuhiro Sakakibara, the ES team has delivered an ES F Sport that’s not racy per se, but that will take anything you throw at it and ask (nicely) for more.

A desirable shelter starts with a strong foundation. The seventh-generation ES (for “Executive Sedan”) adopts Toyota’s front-drive “Global Architecture—K” platform, shared with the all-new Toyota Avalon and Camry. That includes laser screw welds, a 65-foot skein of structural adhesive, and toughened-up suspension mounting points. Lexus claims the structure is nearly as rigid as its rear-drive flagships, the LS sedan and LC coupe. The front bumper and hood are aluminum. Sound-absorption material masks 93 percent of the floorpan.

The midsize ES is 2.8 inches longer and 1.8 wider than its predecessor, with a 2.0-inch wheelbase stretch, and about 78 pounds heavier. Among midsize luxury sedans—including the Mercedes E-Class, BMW 5 Series, and Audi A6—it’s the Lexus that now boasts class-leading rear legroom: At one point, I had three adults in back, and they weren’t at all squashed.

Yes, Lexus's overweening “Spindle Grille” remains the face only a mother could love, and mother Lexus continues to hope that we all coo and pinch its widdle cheeks. But the F Sport’s blacked-out mesh grille at least recalls the sweetest sibling yet, the gorgeous LC Coupe. Family schnoz aside, this ES has genuine curb presence, including a nautical, smartly-creased shoulder line. The Lexus is also two whole inches lower, a big chop for a sedan of this type; yet headroom remains ample front and rear, thanks in part to a redesigned headliner. Throw in that fast roofline, and the ES looks crouched, stretched, and perennially in motion.

For the F Sport, 19-inch, split five-spoke alloy wheels recall those on the richer LC and LS models, while a trunklid spoiler arches over slender taillamps. If the message wasn’t clear that Lexus is sick of beige-and-boring, my test car's Ultrasonic Blue Mica paint—one of two exclusive F Sport shades—was so electrifying, I started checking for its battery cables.

In both aesthetics and athletics, the F Sport provides more reasons to choose it over the standard ES, or that unleaded sippy-cup called the ES hybrid with a CVT transmission. Body-flattering sport seats are a dead ringer for those in the LC—and that’s a $92,000 car, more than double the F Sport’s $45,060 base freight. The leather-wrapped steering wheel is straight from the flagship LS. Aluminum pedals and red stitching add another dash of sporty spice. (No, not that one). Going full habanero, my test car brought bewinged, bordello-red leather seats that recall an Audi RS6. Pretty good company, that.

For a car that, on paper and sticker, ranks as the buck private of the Lexus four-door lineup, the ES 350’s interior is majorly convincing. Materials and switches are high-class all around, including the F Sport’s wave-patterned “Hadori” aluminum trim, a Lexus first that’s inspired by Japanese swordmaking. Driver’s gauges feature a striking, analog chronograph-like dial in the center that motors and pivots to clear room for a digital readout of vehicle functions, all controlled by steering-wheel switches.

I’m finally making peace, however uneasily, with Lexus’ trackpad-based infotainment system, after dealing with a learning curve as rewarding as six months in the prison library. But the ginormous 12.3-inch center screen, set deep into the rich instrument panel like some futuristic Magnavox, flashed its displays and apps with pride. The 17-speaker, 1,800-watt Mark Levinson audio system kicked out the jams and soothed with Erik Satie. The ES is the first Lexus with Apple CarPlay (still no Android Auto), and it’s Alexa-enabled. Verizon-powered wi-fi is standard, and there’s Siri Eyes-Free voice control. That cabin also feels impervious and graveyard quiet. A huge list of passive and active safety features are standard.

The ES soldiers on with its naturally aspirated, 3.5-liter V6. But a port- and direct-injected system lifts power to 302 horses and 267 pound-feet of torque, jumps of 34 hp and 19 pound-feet. (Unlike so many luxury models, the Lexus makes those 302 horses on regular unleaded.) A fresh eight-speed automatic transmission, with a wider ratio spread, replaces the aged, unhurried six-speed; paddle shifters come with the F Sport. That gearbox links through a decidedly old-school, red-stitched manual console lever, rather than the electronic fussbudgets found in so many luxury makes. Lexus pegs the 0-60 mph run at 6.6 seconds, but that’s way too self-effacing: I saw six seconds flat in an unscientific stopwatch run, and I’d bet that the ES would break under six seconds with a solid launch.

In every ES, a more-sensitive, rack-mounted electric steering unit replaces the old column-mounted design. The multi-link rear suspension is also all-new, as is a stiffening V-brace behind rear seats. But the F Sport’s calling card is the Adaptive Variable Suspension, a direct and welcome inheritance from the LC Coupe. These driver-adjustable, road-sensing shocks cover a wide spectrum of damping force. The F Sport also adds a Sport + plus mode to the usual Eco, Normal and Sport settings, for more-aggressive engine, transmission and suspension responses. That’s controlled via the mildly weird Frankenstein bolt that protrudes from the driver’s binnacle.

The changes bring an ES with unexpectedly responsive steering and reassuring control, without sacrificing the spooned-cream ride that’s a brand signature. The Lexus won me over, steadily and stealthily, on a post-Christmas drive from Brooklyn to Boston. On the notoriously coiling Merritt Parkway in New York and Connecticut, I bent the ES into curves at near-autobahn speeds, and it wasn’t at all flustered. Now, we're not talking the passionate, romantic driver connection of an Alfa Romeo Giulia; it’s more a date for high tea at the Plaza. But that kind of date has its own pleasures, its own form of sophistication. And oui, garcon, the bill isn’t so bad: Starting from $45,060, my ES 350 F Sport reached $52,780 with all the trimmings.

While some brands back away from sedans, Lexus (and Toyota) are smartly staying put, hedging their bets, and realizing that nothing lasts forever—whether that’s giveaway gas prices or the assumption that every American will be happy in a two-ton lump of an SUV. Where other automakers wouldn’t predict sedan sales under threat of torture, Lexus confidently expects to move 50,000 ES cars in America each year, about 25 percent in F Sport trim. That’s not world-beating, but still worthwhile—and profitable. For the record, BMW found barely 44,000 buyers for its 3 Series in 2018, a 25-percent drop in a single year. (The all-new 2019 3 Series will surely help reverse such a vertigo-inducing fall).

Point being, the smart money in automaking isn’t about to give up on sedans. Count me among drivers who’d choose this Lexus ES 350 F Sport in a heartbeat over one of the company's ubiquitous SUVs. Life is more than a popularity contest, right?