Sure, no one wants a potentially unreliable car. But Alfa's sport sedan drives so beautifully that I'd take my chances. 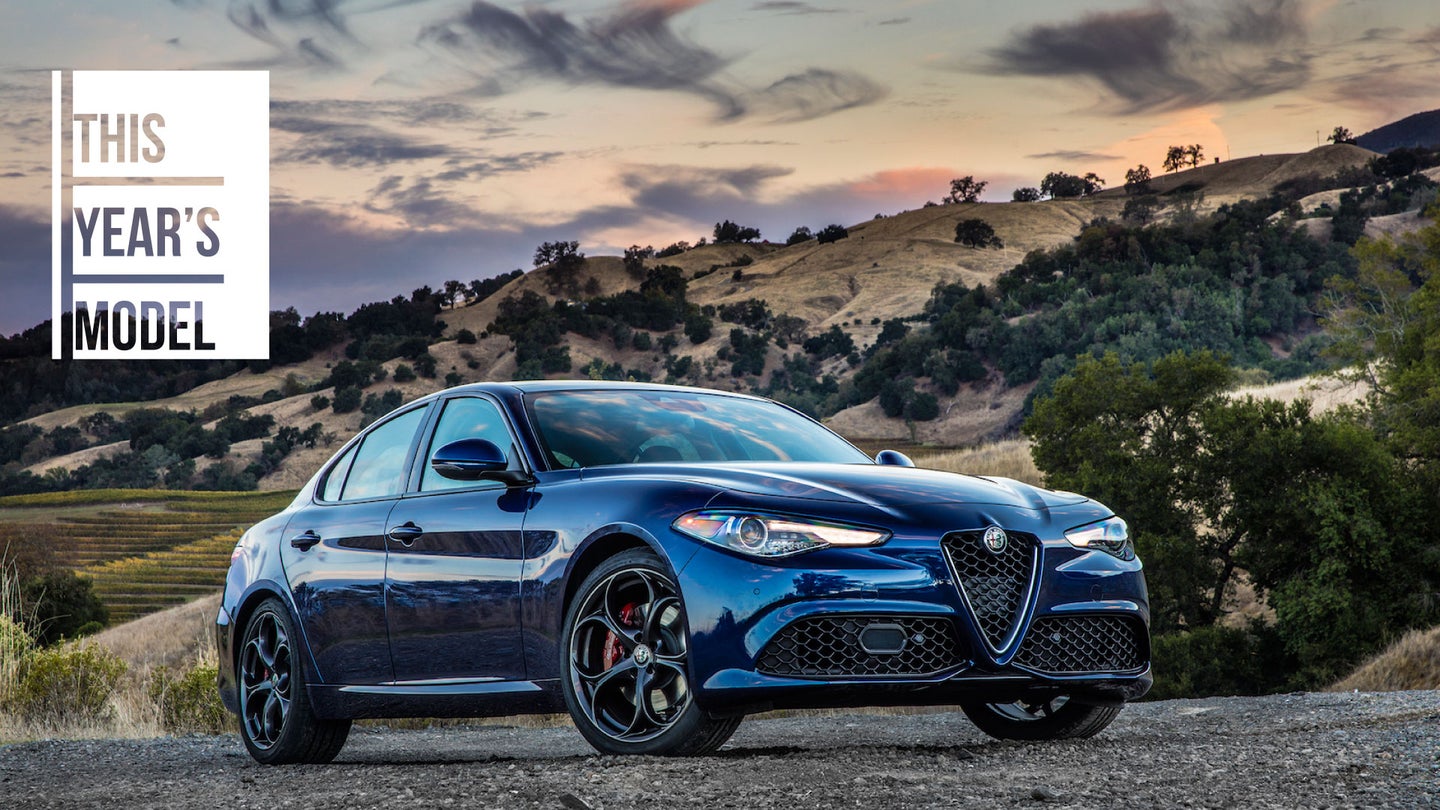 The faults and foibles of the Alfa Romeo Giulia have been well documented. But I just don’t care. Between its old-school spirit and heart-skipping design and performance, the Giulia is sui generis among today’s sport sedans, and I’ve fallen hard for its Italian charms. Excessive quibbling would be like having Super Bowl seats at the 50-yard-line, and complaining about the Bud Light in a plastic cup.

I was first introduced to the Giulia Quadrifoglio (a.k.a. the QV, a.k.a. the QF—it's complicated) at Sonoma Raceway in California in 2016. With 505 horsepower from a Ferrari-derived twin-turbo V6 and a 191-mph top speed, the Quadrifoglio edition of the Alfa Romeo Giulia has gotten all the press. But I knew that the preponderance of buyers would choose the turbocharged four-cylinder Giulia—in large part for its $39,190 base price, versus a wallet-scorching $75,295 for the Quad. So I made a point of securing a rear-drive Giulia Ti for my first extended test of the Alfa, on The Drive’s home turf of New York.

Let's cut to the chase: Nothing went wrong with the Alfa. No "Check Engine" lights, mysterious computer codes, or systems glitches that have hampered other Giulia press cars and renewed worries over Alfa’s potential long-term reliability issues. Instead of the fresh start and open minds that Alfa so badly wanted following its retreat from America in 1995, the Giulia’s teething problems have only amplified old stereotypes of balky Italian cars.

But there’s another Italian stereotype that the Giulia drove home, including over a long, brilliant day of rally-style driving on a snowbound track at Monticello Motor Club: When an Alfa Romeo sedan is on its game, it drives like nothing else. A BMW M3 is great. Ditto a Mercedes-AMG C63, Cadillac ATS-V, or Porsche Panamera. But an Alfa feels different. It is different. It’s the closest thing to a four-door Ferrari that you’ll ever experience, yet people can actually afford one.

A crazy part is that the Giulia, whether four-cylinder or QV, does have holes in its performance game. But they’re largely washed away by waves of driving bliss the instant you dive into corners, abetted by an 11:8:1 steering ratio—and just 2.3 revolutions from lock-to-lock—that’s quicker than many sports cars. Yet the Giulia never feels nervous or twitchy...just perfect. As I palm the beautifully slender, light-effort steering wheel, the handling is so intimate and connected that I’m convinced the Giulia can respond to the temperature changes of my hands. As for rivals, the Cadillac ATS-V probably comes closest in terms of steering and chassis feel. But the Cadillac doesn’t dive into corners as ferociously as the Alfa, and it delivers less tactile information on the road surface and what the front wheels are up to. Bottom line, it's just not as much fun.

As for the Alfa’s performance holes, they begin with a literal hole on the option sheet : The lack of a manual-transmission option in America. For, say, a Porsche Panamera, I get it. But with its 50/50 weight distribution and idyllic chassis tuning, the Giulia cries out for a stick shift as though it were Pavarotti in clown makeup. To whoever was responsible for that misguided decision at Alfa, I have one word: Stronzo. As consolation, the QF does get a lovely set of aluminum paddle shifters – roughly the size of TV antennas—for its eight-speed automatic transmission. They’re optional on the four-cylinder Giulia, part of a Sport package, though even those were missing on my Ti due to its “Lusso” luxury trim. That forced me into a clammy handshake with one of the Giulia’s lamest bits: A flimsy, plasticky console shifter that’s like a Walmart version of BMW’s electronic wand. Buyers will want those optional Ferrari-style paddles, no question.

The next issue is the brakes. Not for their formidable stopping power—thanks in part to big Brembo discs—but their vague pedal feel. The Alfa adopts Continental’s brake-by-wire system, which severs all physical links between the brake pedal and the stoppers themselves. Pushing the pedal sends electrical signals to a digital module that combines a brake booster, ABS, and stability control. The system tries to simulate the pedal-force feedback of normal brakes, with a computer brain and linear actuator translating commands into hydraulic force at the wheels. But Alfa needs to tinker to get a more-progressive feel, to mimic the natural buildup of resistance over the pedal's travel. In city traffic in particular, the Alfa’s brakes sometimes feel like an on-off switch.

The Alfa’s other concerns involve practicality and perception. Rear-seat legroom is tight, though headroom is solid. Front seat cushions are somewhat truncated, especially for long-legged occupants. The trunk opening is small, and strangely, there are no folding rear seats, or even a cargo pass-through. The entire trunk lid wobbled like fresh panna cotta when I slammed it shut. Front doors close with a two-syllable ca-chunk, rather than the satisfying snick of German cars.

The other head-scratcher is that there’s no way to turn off either traction or stability control on the four-cylinder Giulia. (You can shut it off on the Quadrifoglio). We performed a little trick—sorry, our lips are sealed—to disable stability control and free the Alfa for some on-track winter frolicking. And on regular pavement, the Alfa’s stability systems barely intrude until the car really starts to break loose. But a skilled driver (or someone looking to break free from a snowbank) might still want the choice of fully au natural driving.

Now, the good stuff. The Alfa’s corset-waisted design isn’t unconventional, yet it’s all so unfamiliar—from that pavement-sniffing triangular grille to those Italian swells and curves—that the Giulia nearly comes off as exotic. Again and again, jaded passersby in Manhattan stopped what they were doing when they spotted the Alfa, firing off questions and reactions—What kind of car is that? Whoa, that’s a beautiful car—that aren’t often elicited by a sedan, let alone one that costs less than $50,000. People weren’t always sure what the Alfa was, but they sure as hell liked it.

Inside, some cabin plastics and jiggly switches that offend luxury sensibilities in an $80,000 Quadrifoglio are quite acceptable in these $40,000-to-$50,000 models. And I adore the Michelangelo sweep of the Alfa’s stitched-leather dashboard, in a cabin so minimal and driver-focused that it makes an Audi seem overstuffed. It’s a very Eighties feel, and I mean that as a high compliment. That leather-wrapped dash and upper doors are part of a $2,250 package which includes 18-inch wheels, comely wood trim, higher-grade leather seats, and more. The infotainment system gets a striking, flush-mounted integration, though the screen is postcard-tiny and its navigation system primitive.

The upside is that the Giulia is a car you don’t mind getting lost in. The 2.0-liter four, with its twin-scroll turbocharger, pumps out 280 horsepower and a robust 306 pound-feet of torque. It hustles to 60 mph in 5.1 seconds, with a 149-mph top speed.  That’s well off the pace of the QV, of course. And some of that model’s exotica—carbon-ceramic brakes, Sparco sport seats, a torque-vectoring rear differential—isn’t available on the standard Giulia. Yet the more-affordable Alfa still gets a carbon-fiber driveshaft. And at barely 3,600 pounds in rear drive trim (AWD is optional), it undercuts the Quad by about 200 pounds. The engine isn’t a particularly high revver, shifting well before its 6,200-rpm fuel cutoff. But it emits an feisty rasp at all times, and there’s a fat dollop of torque between roughly 2,500 and 5,500 rpm.

Even after playing rally driver at Monticello all day, and facing a two-hour drive back to New York, I'm ready for more. The wildly entertaining backroads beyond the track are my last spree before my return to the maggot-eaten roads of the Big Apple. So I make the most of the opportunity, flinging the Alfa between plowed snowbanks like a one-man Italian luge. What a day. What a car.

I realize that, as an auto journalist, I’m not the one making the payments. But here’s my defense of the Alfa. 30 or 40 years ago, people knew the deal with "foreign" cars like Alfas—or Fiats, Triumphs, Jaguars, et al—yet they bought them and loved them anyway. High maintenance was almost part of the charm, a way to bond with and understand your unique car, quirks and all. Today—in part because no one works on their own late-model cars anymore—there’s no patience for the slightest inconvenience, no forgiveness for anything that forces a trip to the service department. Meanwhile, car writers and enthusiasts love to bitch about how “They don’t build ‘em like that anymore,” typically as they bemoan modern BMWs that prioritize luxury or reliability as much as performance. Now the Alfa is here, and it's exactly the kind of old-school, analog-style sport sedan they're supposedly dying for. For all the big talkers, it's a chance to put their money where their mouth is. Alfa managed to sell 8,900 Giulias in America in 2017, not a terrible result for a reborn, underdog brand...but few enough to make clear that most of the big talkers and nostalgia peddlers ended up buying a BMW or Audi anyway.

My advice for anyone who’s head-over-heels for the Giulia: Take the plunge, but consider a lease that will keep entanglements and sleepless nights to a minimum. Much has been made of two-year leases in the $299-a-month range, but those are familiar, bait-and-switchy dealer come-ons. First, they describe a dead-stripper Giulia with a $3,300 down payment and a stingy 10,000-mile annual mileage limit. More-conventional leases will put you in a well-equipped Giulia Ti for closer to $450 a month. That’s still a fair deal for a sport sedan that delivers more smiles-per-mile than anything in its class. (Whether buying or leasing, the Giulia Ti’s prices are far-more manageable than the Quadrifoglio’s, which boasts gut-clenching leases of around $1,400 a month.)

More advice: It’s easy enough to talk yourself out of the Alfa, even without listening to a dozen other people who’ll be determined to talk you out of it. Relatives, friends, co-workers: They’ll all have an opinion on Alfa Romeo, or Italian cars, and those opinions may not be favorable or particularly well-informed. Remember that these friends and acquaintances drive Toyotas...or SUVs...or Toyota SUVs. There’s a reason you’re not like them.

When you finally acquire that Giulia, you’ll discover you’re driving a Roman god in a world of mortal sedans. Hopefully that realization won’t come while you’re sipping espresso in the Alfa service center. If it does, remind yourself that Roman gods have been known to stub a toe when they’re not being notorious shit-heads. Order another espresso, and ask the technician if your Alfa really can hurl lightning bolts...or if it’s just the electrical system.