Alfa Romeo's 505-horsepower Stelvio Quadrifoglio is capable of both tearing up tracks and carrying kids about...but it's clear which one it likes more. 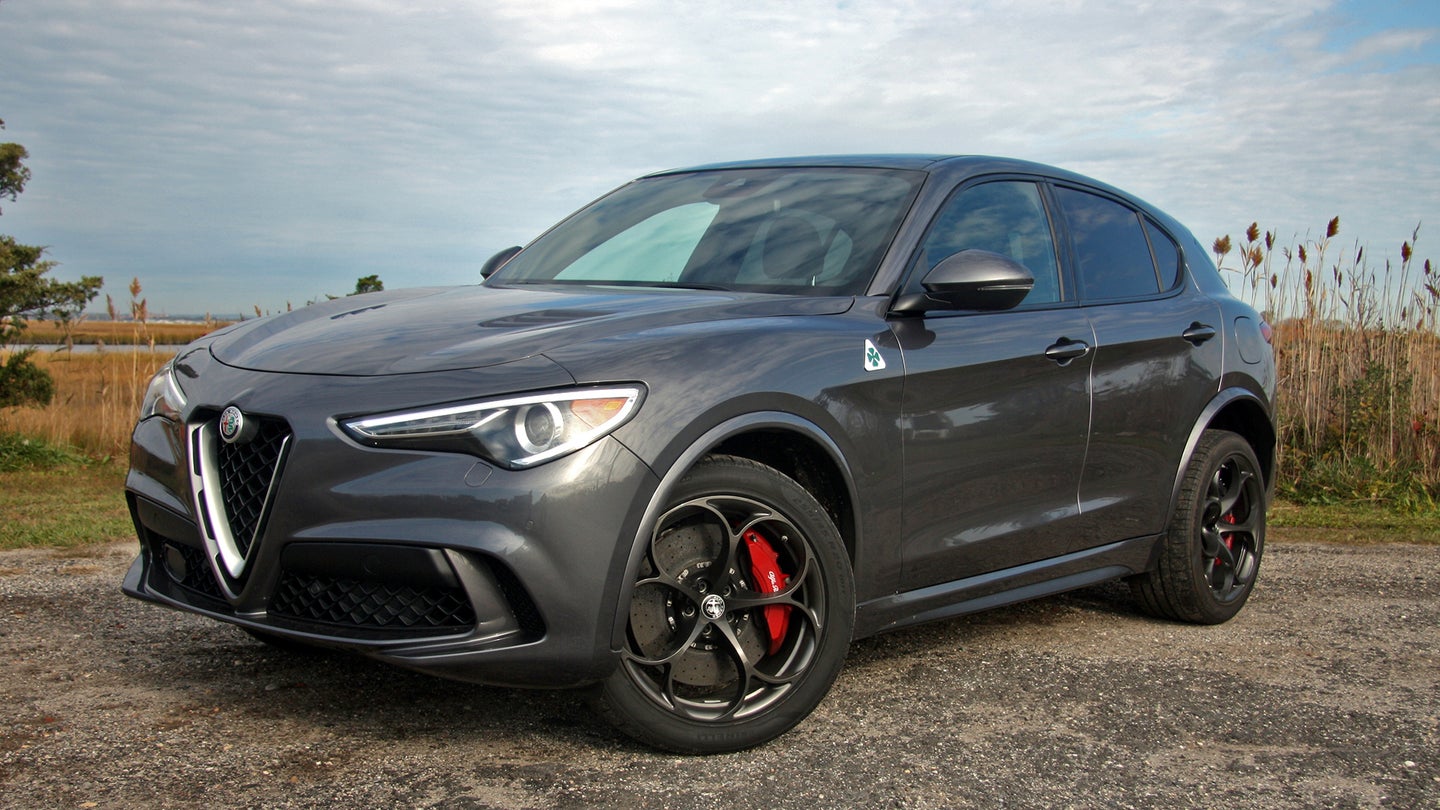 I finally did it: I'm a dad. The funny thing is, I've always owned dad cars, even before I needed to. Owning anything with less than four doors never made much sense, which is how I ended up with a stable of souped-up grandpa cars from the Sixties and Seventies. Now that I'm a father, the '74 Oldsmobile sedan I brought my wife and son home from the hospital in seems a bit dated. And that, my friends, is how I found myself on this quest to find the perfect new dad car. The latest contender: The 2018 Alfa Romeo Stelvio Quadrifoglio.

The 2018 Alfa Romeo Stelvio Quadrifoglio, By the Numbers

Imagine you had one of the fastest race horses money could buy. Your horse—let's call him, say, Nozze di Figaro—could run hard and win races. But instead of letting well enough alone and enjoying ol' Nozze for his intended purpose—i.e. dashing around the track—you harness him to a small farm cart so that you can carry your groceries and a handful of family members around, too.

That's kind of what it's like driving the Alfa Romeo Stelvio Quadrifoglio. Always champing at the bit to go, go, go, it's a vehicle that responds poorly to soft inputs, but goes like hell when you lay into it. Is it practical? Sort of—but in this modern era when reliable, fast-as-hell performance crossovers are a dime a dozen, it's more difficult than ever for automakers to sell that kind of "character" to American car buyers.

Let's start by talking about brakes, the most important part of any car. The Quadrifoglio is available with a set of huge carbon-ceramic Brembo brakes—six-piston calipers on 15.4-inch rotors up front and four-piston calipers on 14.2-inch rotors in the rear. They work great, but only when you want maximum braking power. The Alfa's brake-by-wire system is not at all learned in the ways of gradual stopping—which means that, unless you plan on attacking every turn and stop signs like you would a sharp bend in a racetrack, you'll experience plenty of spilled drinks and seasick passengers in the course of everyday driving.

I tried using only my big toe to feather the pedal as I approached stoplights, but this stepping-on-eggshells approach cracked once it came time to stop the vehicle outright. The brakes—which, by the time I received the test car, had a pretty good wobble in the rotors, undoubtedly from repeated flogging by other journalists who realized that full-on was the only way to drive this car—had two modes: off, and all the way on. My wife was not amused, and complained of nausea.

The steering presents its own issues. The Stelvio Quadrifoglio's lightning-fast setup (the steering has a 12:1 ratio) made it possible for the car to flit back and forth through the tiniest holes in traffic as well as it dove into and exploded out of tight curves. But in normal, boring old traffic—the sort that dominates most people's driving experience—it was uncomfortably fast for the languid 90-degree turns safe city driving requires.

There are four different driving modes to control damping and acceleration. In race mode, the engine assumes a higher rpm at every chance and a much louder exhaust note, sputtering out stentorian braps as the transmission changes gears under full throttle pulls. The next one down—dynamic mode—re-engages the stability and traction control systems. Natural mode is the middle one; it's a (tiny) bit more mellow. Advanced efficiency mode deactivates some of the six cylinders from time to time, and takes some of the bite out of the vehicle's otherwise beastly acceleration, as well as improving traction on slick surfaces. Yet none of these modes, even advanced efficiency, did much to take the edge off of the Quadrifoglio's eager brakes and steering.

Space-wise, the Stelvio is as good as any other small- to medium-sized crossover. The front seats are roomy, and as long as the front passengers aren't too tall, so is the rear bench. Cargo volume with the rear seats up is 18.5 cubic feet—not huge, but with a long, wide load floor, it was easy to pile things into the back of this vehicle. I was able to fit a folded stroller, junior's diaper bag, my wife's computer bag, and a week's worth of groceries with ease. With the seats folded flat, cargo volume goes up to nearly 57 cubic feet. Add in the available roof rack, and the Stelvio offers practical versatility for just about any situation the suburban (or urban or rural, for that matter) schlub is likely to encounter. Costco runs, camping trips, dog spa visits—you name it, the Stelvio's ready to go.

The cherry on top of all this usability is the interior aesthetic. A carbon fiber-accented steering wheel is a $400 option, but with its squarish shape and red start-stop button on the lower-left quadrant, it only adds to the Stelvio's race car vibe. The gauges look like 1970s performance car throwbacks, and the infotainment screen is tastefully blended into a black dress panel. The car I tested came with red leather interior accents, a lovely accent reminiscent of now-deposed Pope Benedict's sumptuous red leather shoes.

The dynamic driver assist package is a must-have for the oft-distracted family man. Along with adaptive cruise control, it includes forward collision warning, adaptive high beams (which are a little touchy for my taste), lane departure warning, and something called an "infrared windshield" that's supposed to prevent heat buildup inside the car. For whatever reason (most likely because the Stelvio is built in Italy and not many Americans buy them), the Stelvio has not yet been crash test rated, either by the Insurance Institute for Highway Safety or the federal government. The Giulia sedan, which shares a platform with the Stelvio, is an IIHS Top Safety Pick, so that's encouraging (if not conclusive).

Where the Stelvio shines is on the open road, when traffic and errands melt away and empty curves and straightaways beckon. It's not the most beautiful car ever conceived, but it is lovely, its many thoughtful details adding up to a totality that inspires a vague feeling of old-fashioned motoring romance. Everything else about the Stelvio is calculated to get your heart pumping, to make you feel hot-blooded and Italian. When you can find the time and space to actualize that experience, it's a blissful one. If only the crushing pressure of life's humdrum side weren't so pervasive.

Naturally, the Quadrifoglio version of the Stelvio ain't cheap. A perfectly capable 280-horsepower turbo-four Stelvio can be had for a starting price of less than $43,000; the extra ponies that come with the little four-leaf clover badges on the front fenders help drive up the starting price to nearly double that. Add in all the awesome available performance features—gigantic brakes ($8,000), carbon fiber Sparco racing seats ($3,500), dynamic driver assist package ($1,500) and panoramic sunroof ($1,350) are the big ones—drive up the price in short order. The car I tested had everything but the racing seats, and a high price to match.

With all the great performance crossovers on the market today, you'd be hard-pressed to throw down this kind of loot on a Stelvio. Even one as brutally fast as the Quadrifoglio would be a tough sell to luxury car buyers long attuned to the reliability of German and Japanese cars. It'd really come down to a matter of personal taste. Do you like your cart horse vivace? If so—and if you're willing to accept a bit of risk in the reliability department—perhaps the Stelvio is the car for you. For my part, I may be Italian-American, but my connection with this raging quadruped stops at the superficial label we share. Primarily American in my tastes and habits, boring practicality is more alluring than hot passion over the long haul. I just don't have the heart to subject my family to something so animato on a daily basis.

The family fits.
The Drive
MORE TO READ