Hyundai's fledgling Genesis brand is putting itself on the luxury map, one winning model at a time. 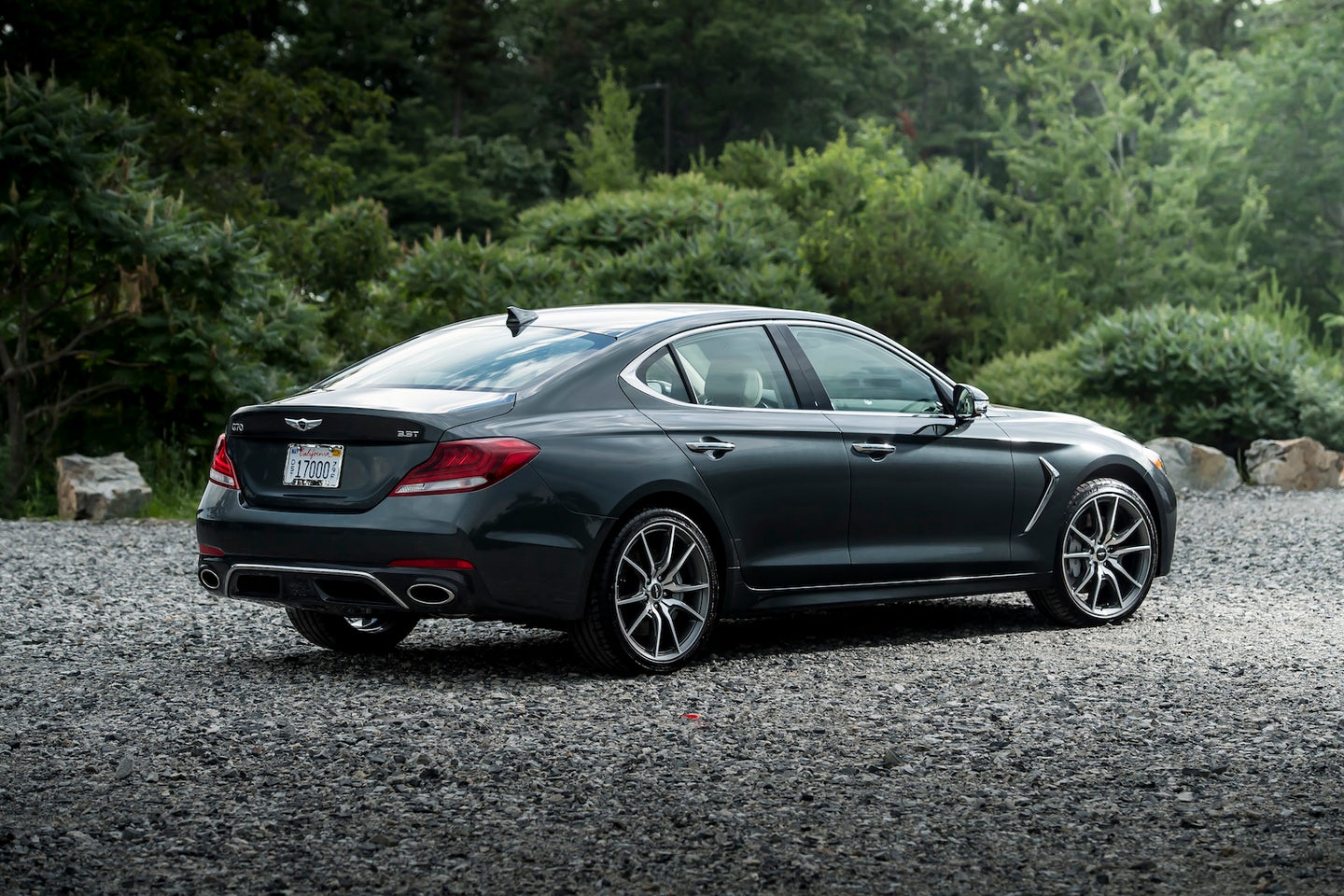 If imitation is the sincerest flattery, then established luxury brands must be blushing over the new Genesis G70. The rookie sport sedan from Hyundai’s luxury division cribs shamelessly from the veterans: Audi, BMW, Mercedes-Benz, and Jaguar. Yet if you’re going to steal, Genesis seems to be saying, at least steal the best parts from the best. That includes not just G70 design tropes—including what appears a precise replica of Audi’s knurled-aluminum, steering-wheel-mounted scroll wheels—but the pilfering of top talent. Readers who follow the industry may be aware of Hyundai and Kia’s busy HR department, whose recent coups include Albert Biermann, the former chief engineer of BMW’s storied M Division, and Luc Donckerwolke, the former Bentley, Lamborghini, and Volkswagen designer tapped to lead the Genesis and Hyundai styling studios.

Fortunately, the G70 has also cribbed the chassis dynamics of some leading sport sedans. This is a legitimately fun-to-drive, handsome, and luxurious sedan. It's fast, too, especially with the 365-horsepower, twin-turbo V6 that escorts the G70 from 0-60 miles per hour in 4.4 seconds when paired with optional all-wheel-drive and launch control. Underlining the bona fides is another option, a six-speed manual that’s only available on the lighter 2.0T G70 model with its 255-hp turbo four. (That engine makes 252 hp with the eight-speed automatic.) If all that’s not enough to make friends, the Genesis—like its critically lauded cousin, the Kia Stinger GT—will stuff a fat wad of savings into buyer’s pockets. With rear-wheel-drive and the paddle-shifted automatic, the 2.0T’s starting price of $35,895 undercuts a 240-hp BMW 330i by $5,350, and it's $4,280 cheaper than an Audi A4 Premium Plus 2.0.

Genesis G70 design is elegant, if not all that original

Where the Stinger's exterior is a straight-up homage to the Audi A7 and A5/S5 Sportback, the Genesis fills its design basket from a longer aisle of luxury sedans: some Audi here and there; a touch of Jaguar in the crouched stance and finely-etched hood; a whole lot of BMW in the rearward silhouette. Genesis claims the lowest overall height and width in its class. It’s an appealing and straightforward design, if a bit anonymous, fronted by Genesis’s huge crosshatched grille. But someone has to say it: The Kia Stinger looks even better, with its stretched-GT hatchback design.

The appealing cabin, with its authentic materials, quality switchgear (including milled aluminum controls), and clean layout, also delivers on the promise of luxury-for-less. It’s airy and spacious up front, but cramped in back, especially when it comes to knee room. The front seats are shapely and comfy, and I got a kick out of the controls that let a driver adjust the passenger seat without a straining reach, a feature usually reserved for top-end luxury models. The 8.0-inch touchscreen perched atop the center stack is another hat-tip to BMW and Mercedes, but Genesis does go its own way by eschewing the rotary-knob console controller found on every German competitor. (As a result, the G70's version can demand a bit of a stretch to poke the screen.) And the screen graphics are largely identical to those of lesser Hyundai models—something for Genesis to work on. Though I wasn’t mortally offended, because everything just works inside the G70, with no learning curve to speak of, a blessed change from the over-complicated likes of Lexus. Apple CarPlay, Android Auto connectivity, and SiriusXM satellite radio are standard. An optional 15-speaker, 660-watt Lexicon audio system brings crisp music reproduction, thanks to Harman's ClariFi tech that spiffs up compressed audio sources and subwoofers mounted below front seats.

For all the interior’s fancy goodness, it still struck me as a bit Xeroxed, taking so much inspiration from other luxury makers—including optional, Audi-style quilted Nappa leather—that there’s little sense of a Genesis designer applying his or her distinctive stamp. Perhaps that’s a lot to ask from a fledgling brand that doesn't have a century of design history and familiarity behind it, as with Mercedes. I lodged similar criticisms of Lexus's original models that seemed blatant Mercedes reproductions, so let's give Genesis time to spread its wings to go along with its winged badge that looks just like Bentley's. And there’s something to be said for learning from your betters: Since Cadillac, for one, can’t seem to design an interior to save its struggling ass, maybe the company should also borrow from the Germans until it figures out how to do it on its own.

If the cabin doesn’t show many designer fingerprints, the fingerprints of Herr Biermann are all over the G70’s driving experience. That begins with a well-chosen balance between a quiet, comfortable ride and sporting performance, even on my 3.3T’s 19-inch alloy wheels with Michelin Pilot Sport 4 tires. Its AWD system brought brake-based torque vectoring, along with an optional adaptive suspension. (All rear-drive models get a mechanical limited-slip differential.) Up to 20 percent of the power can be diverted to the front wheels, and a Drift mode lets you prioritize rear-driven torque to bust those sticky Michelins loose. My G70 did display some unwanted dive under hard braking, and an overly-soft brake pedal—though the Brembo brakes themselves are powerful, packing four-piston front calipers and 13.8-inch rotors.

In sharp contrast to older Hyundais or the original Genesis G90, whose steering could be downright awful—lifeless, artificially heavy, just plain weird—this G70’s electric-assisted rack feels natural and sophisticated. The steering ratio isn’t super-quick, at 3.3 turns lock-to-lock, and the rack-mounted electric unit filters out a bit more of the road surface than I'd prefer. But this G70 carves as faithfully as Dad at the Thanksgiving table, tucking into fast corners with grace and confidence. It felt more a glider than a track-oriented fighter, responding best to smooth, precise inputs of power and steering angle.

Chassis balance is a high point, though my AWD model evinced some telltale understeer near the limit, especially on the windiest roads through the boonies north of Manhattan.  I’ll further suggest that the G70 feels mildly underdamped in some situations, especially when settling itself through high-speed curves over broken pavement. There is a Dynamic Edition with a sportier suspension tune, performance brake pads and some other extras, but it’s limited to a 400-unit run for the 2019 model year only. As for the adaptive suspension, I couldn’t suss out much difference in body roll or ride quality between Comfort and Sport models—though the throttle felt a bit jumpy in Sport, causing the G70 to lurch from stoplights. I also learned that my mega-powered G70 preferred to exit many corners in third gear rather than second, where there was still ample torque available, but not so much as to upset the chassis.

“Ample” definitely describes the twin-turbo V6, offering a mesa-flat powerband and a lusty 376 pound-feet of peak torque. Engine sounds are piped into the cabin via the audio system, amping up as you dial toward the Sport setting; you can switch the subtle concert off if you prefer. Both the four- and six-cylinder engines are powerful workhorses that deliver the bottom-line acceleration specs that enthusiasts love to bandy about.

But time for more perspective: Both powertrains come up a bit shy in the character department. The V6, for all its might, doesn’t spin the silken magic of a BMW inline-six or Audi’s 3.0-liter V6. (I haven’t sampled the four-banger in the Genesis, but I’ve driven the identical engine in the Stinger). And while the Genesis’s eight-speed automatic transmission is competent, it’s slow on the uptake compared with the Mercedes-AMG C43’s sparkling nine-speed, or BMW’s and Audi’s own eight-speed units. Sure, whether the Germans charge too much is a valid question, but you’re definitely getting something for the extra $5,000 to $12,000 they charge, and it’s more than a socially approved badge. I haven’t even brought up the Alfa Romeo Giulia, which remains the pure-performance benchmark among every one of these compact sport sedans. It also starts from nearly $75,000 in 505-hp Quadrifoglio form, though you can get a solid lease deal on the four-cylinder version.

Hard to beat this Genesis in terms of value

None of this is to diminish the achievement of the G70 in terms of bang-for-the-buck design, performance, and luxury. The price of that Alfa, along with high-powered Deutsche cars, underlines the difference—for many, many consumers—between the fantasy sedans you read and dream about, and the sedan you can actually afford. I can’t wait to drive the even-more-affordable, rear-drive Genesis 2.0T version; naturally, I'd prefer it with the stick shift you can’t get in most competitors, including the all-new 2020 BMW 3 Series that goes on sale in spring. I sure as hell can’t afford a $63,000 Audi S4, but I could afford a four-cylinder G70, and I’m sure I’m not the only sedan enthusiast in that position.

The idea of Hyundai luxury cars, followed by this stand-alone luxury brand, elicited plenty of snickers just a few years ago. No one’s laughing now, as Genesis has delivered three worthy sedans, each in my mind better than the last: The full-size G90, the midsize G80, and now the compact G70. The brand remains an underdog, and sales are modest as Genesis makes the difficult transition to that stand-alone status, including creating new Genesis showrooms separate from existing Hyundai stores. At a recent lunch in Brooklyn’s fashionable Dumbo neighborhood (another underdog success story), Erwin Raphael, Genesis’s straight-talking North American brand manager—an Army veteran who’s also been an environmental engineer and Chrysler plant manager in Detroit—acknowledged the heavy lifting ahead. But the brand seems to be making all the right moves, including a focus on reliability and top-flight customer service, such as picking up your Genesis for service and returning it when it’s done. It’s a familiar template that helped launched Lexus to luxury heights beginning in the early Nineties.

The only head-scratcher may be that product rollout, with three traditional luxury sedans back-to-back, but nary a crossover SUV. Executives say the brand wanted establish itself in manageable, lower-volume segments—beginning with that flagship G90—before expanding, to the point that Genesis stopped importing sedans here from Korea for a chunk of 2018 as it readied new showrooms for Genesis customers. Still, those Genesis crossovers are in the pipeline, with one scheduled for 2020 and another in 2021. I’m not sure what shape they’ll take, but on the evidence of cars like the G70, I’ll hazard a guess: They’ll be well-built, fully competitive in performance, appealingly loaded, and smartly priced. Now, Genesis, bring just a bit skosh more daring, distinction, and personality on the design front, and I’ll be fully sold.

We Chatted With Genesis About the Exciting New G70
The Drive